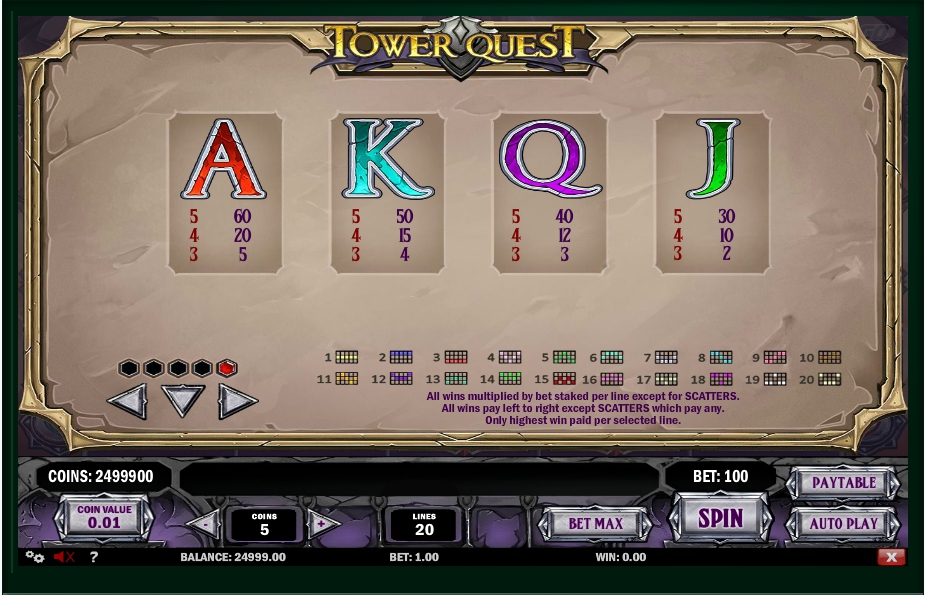 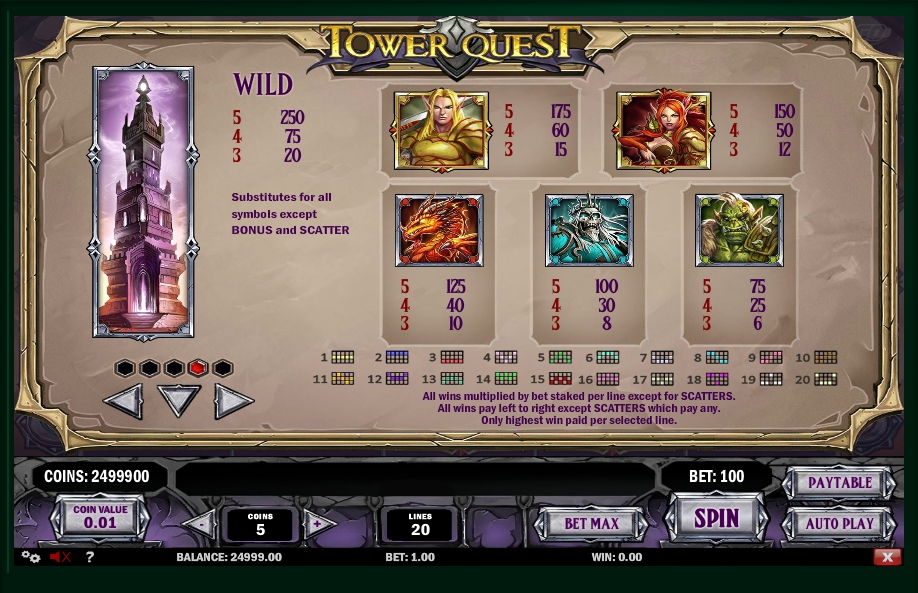 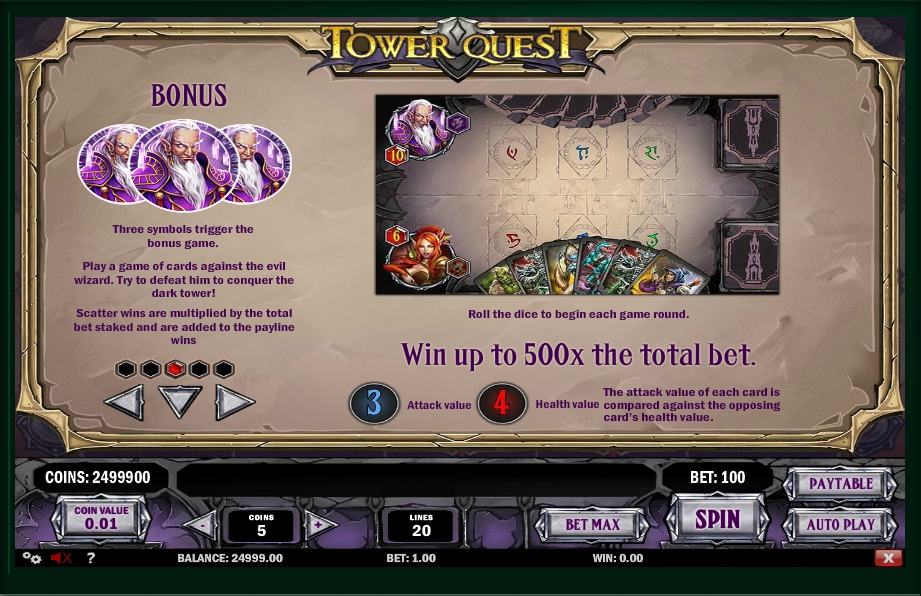 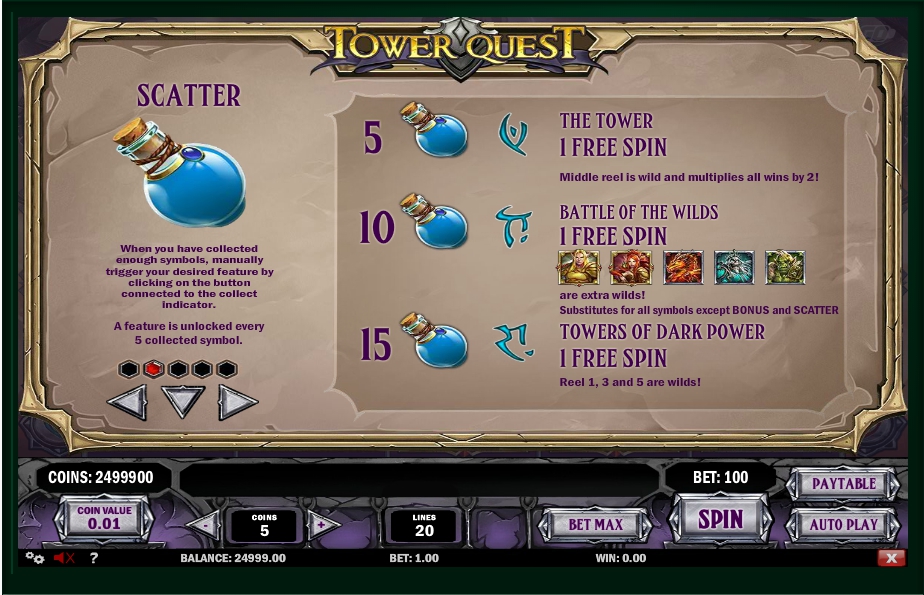 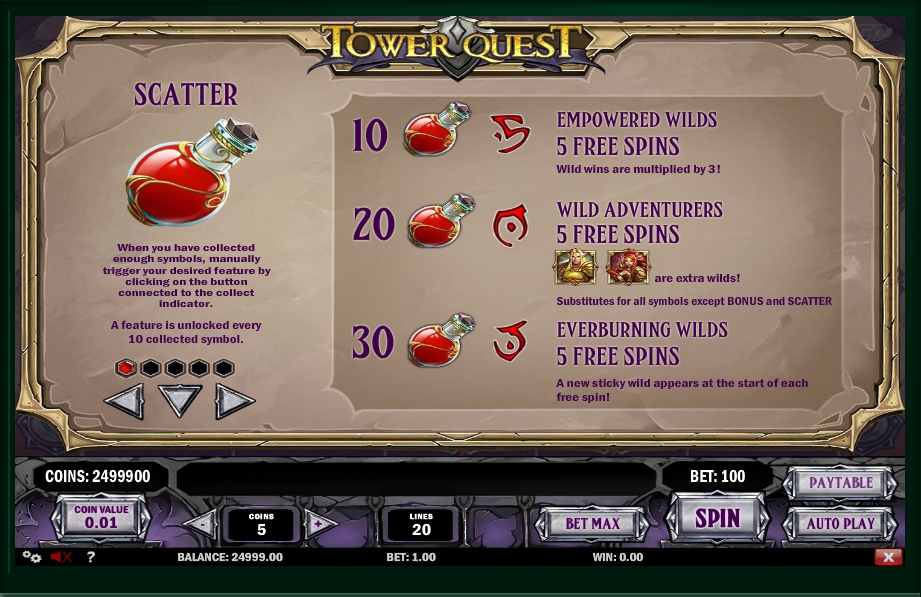 The theme of magic and fantasy is very popular everywhere including in the field of online casinos. That’s why slot machines developer Play’n’Go decided to create casino Tower Quest based on magic and adventures. The team of professionals managed to create a colorful and exciting game with high-end graphics and an unusual storyline.

Features of automat are visible in all. This is a repetition of the classic desktop role-playing game and the availability of bonuses that attract players in terms of win. The main and most profitable bonuses can be obtained by collecting flasks with potions. There are two types of potions with different effects. They accumulate in special vessels.

Heroic battles in online Tower Quest will be held on the playing field of five reels with three rows. Each battle involves drawing a bet on 20 fixed lines the size of which the participant chooses for personal discretion in the acceptable range from 0.20 to 100 monetary units. To win the round, after the rotation of the reels there must remain a combination of three identical pictures with a mandatory arrangement from left to right.

The prize amount will directly depend on the cost of the participating symbols and can bring multiplication of the initial bet to x250. The final parameter, which players should pay attention to, is the RTP level with a theoretical return of funds to 96.65% of total deposits.

Subjects of the plot of Tower Quest play a major role in the style of decoration and they were supplemented by musical melodies of adventure motives. Another attribute of the style of fantasy was a collection of characters, which depicts the main characters of the slot, the denominations of cards and bottles of potions.

It is at the expense of the latest titles that the participant will be able to improve the functionality of the drawings after filling the respective indicators on both sides of the reels.

There are various bonuses and multipliers of the bet. Among the key bonuses can be identified vessels with blue and red potions. During the rotation, the vessels located on either side of the playing field are gradually filled with blue or red liquid. After filling five blue containers, the player can activate the “Tower” option, which doubles the winnings.

Ten blue flasks give the transformation of the most expensive characters in wilds. Finally, with a fully filled vessel, you get the maximum bonus reward: the first, third and fifth drums are completely converted into wild symbols by one spin. This allows you to increase the winnings by making the maximum number of combinations.

If you collect 5 red containers then get five free-spins. For 10 red vessels the device will give five free spins and turn two images into wild symbols. For 20 vessels you are expected to free-backs, as well as turning one picture into a universal wild symbol for 5 free spins.

The most impressive gain in Tower Quest will be a meeting with a powerful wizard. When 3 symbols representing a sorcerer appear a special bonus round is launched where you need to throw dice. Depending on the numbers you drop you are offered cards with heroes that have attack and defense options.

The wizard acts the same way. If the hero beats the wizard’s card he deals a common damage to him gaining an additional plus to the win. A complete victory is achieved when the wizard has 0 lives. Either way, the bonus round will bring you a very tangible win.