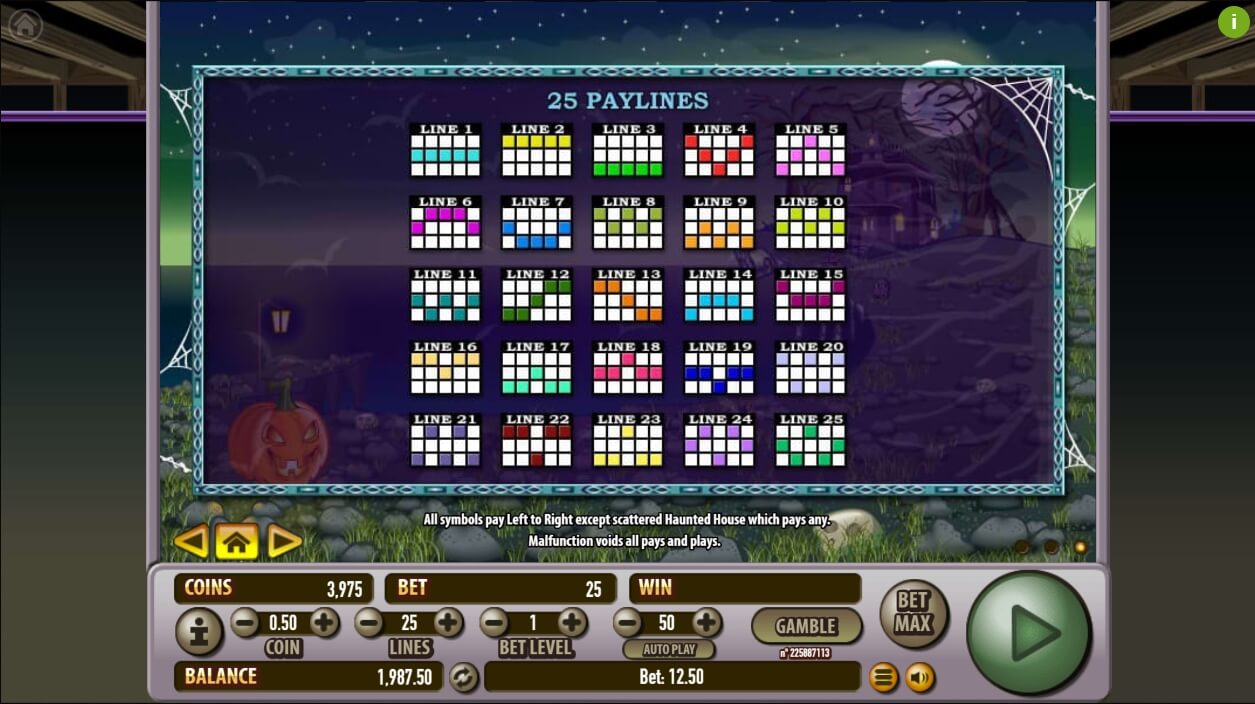 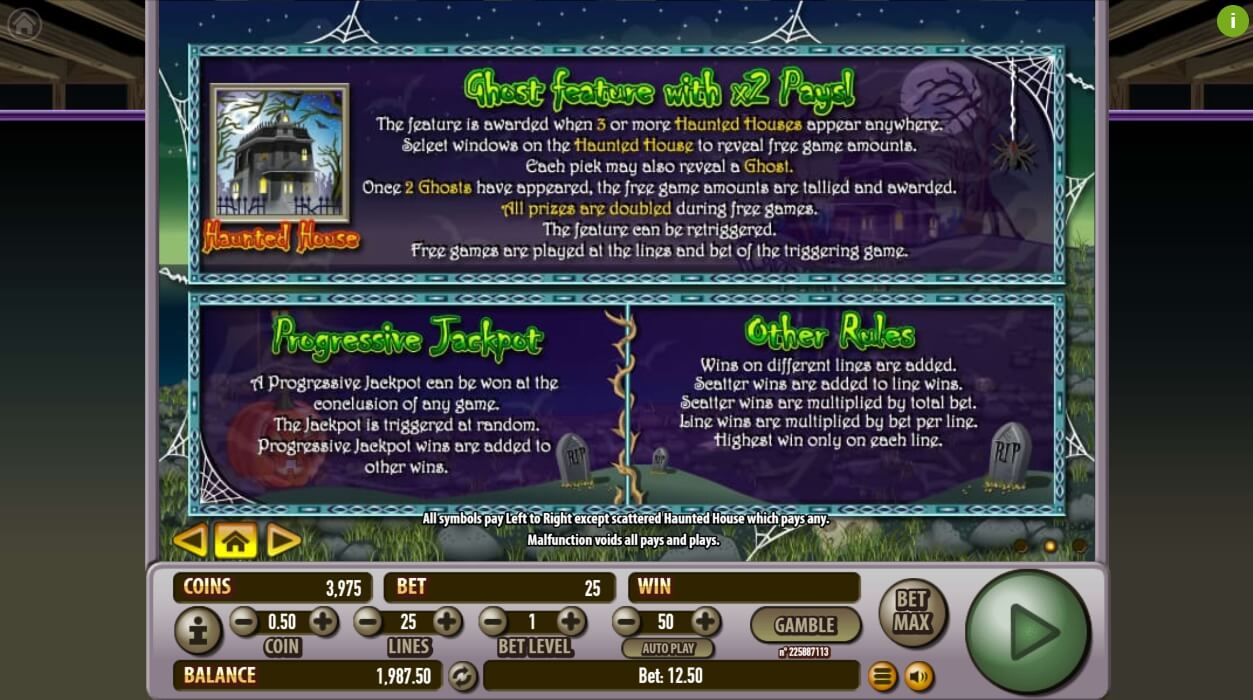 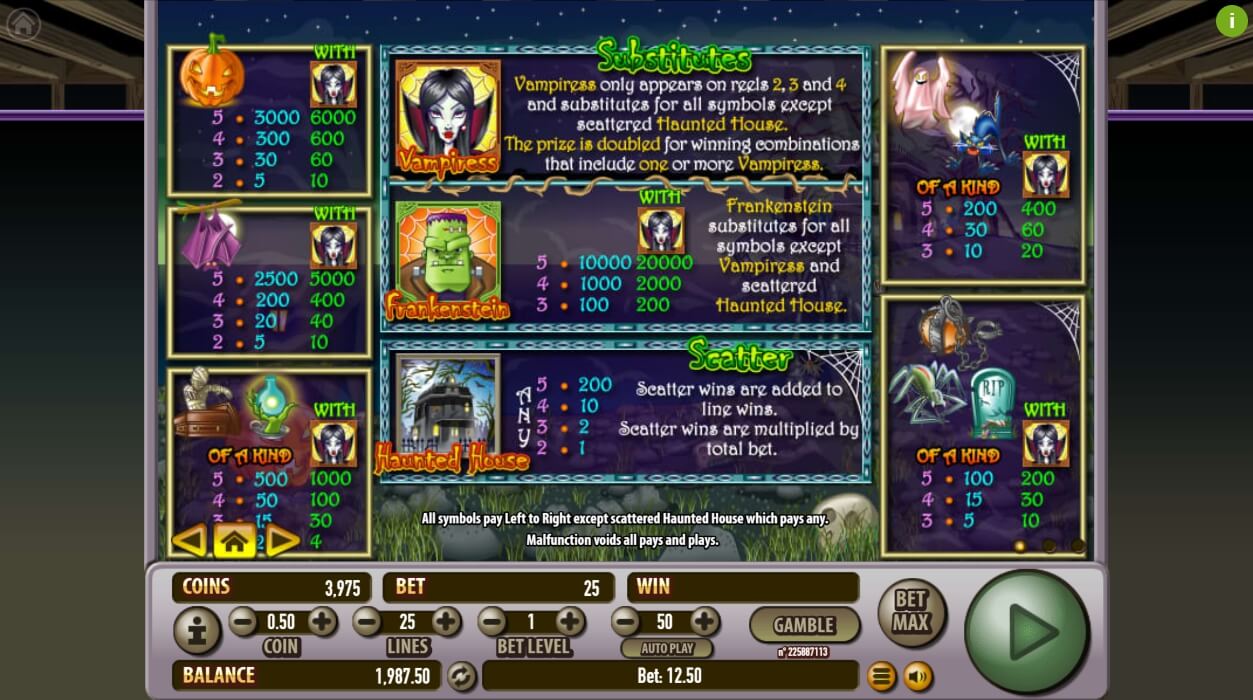 Welcome to the horror! This is an analogue video slot machine to the American Horror Story. You will be able to see a dark grey background in the game and scaring symbols. There is no 3D animation in the game, but players will be pleased with HD graphics and colorful contrast playing icons. Light sounds on the background will make this game even more scaring and give a chance to concentrate better on the gambling session!

Players don’t have to complete registration on the website of our online casino to play a free version of the game. Exactly this version of the slot machine gamblers will be able to see on our website. There is no need to download the slot game to the computer as well.

This is a traditional video slot game with five reels and three rows in height. They form an interface with 15 spaces on it. All of them can be filled with 11 playing icons. In total, there are 25 paylines in the game.

However, the player can change the amount of winning combinations to optimal one, pressing “plus” and “minus” buttons on the bottom of the interface. By the way, gamblers can change a bet in the game from one cent to 20 coins manually.

Two wild symbols and one scatter in the game will make this video slot machine super special and interesting to play. Turn on the Ghost House bonus game and get your cash doubled. How can the bonus round be activated? Just get two Ghost Houses icons on the interface and their windows will wide open. After that, there will be two ghosts flying out of them. Catch both ghosts and you will get your cash doubled quickly!

The first wild symbol in the game is a vampire. It can be found on the second, the third and the fourth reels. The vampire can quickly replace all other playing icons and put those that are needed to get a lucky winning combination instead of them. It there will be two wild symbols of this type, the player will get his or her cash doubled automatically! At the same time, there is the Frankenstein wild symbol available in the game. It can be found on any reel. Frankenstein can not only replace all other playing icons with those that are needed to get a winning combination, but also bring a multiplier to the gambler.

In the amount of five, this wild symbols will be able to give the x1000 boost of cash to the player. If there will be Frankenstein with the Vampire, the player will get the x2000 boost of cash quickly! Haunted House is a scatter symbol. It can be met on any reel. One symbol like that will be useless, but if there are two and more haunted houses in the game, that can give the player a boost of cash.

Two Haunted Houses will give the player only x1 multiplier, five symbols like that will offer the x200 boost of cash! Multiplier itself is also available in the game. It launches automatically after every lucky spin of reel available in the “Haunted House” video slot machine. Choose between red and black cards playing it and get your cash doubled!