You can not play this game for free
For free slots game go
Play free
or
(24 votes)
Game Played: 16
Full screen: close 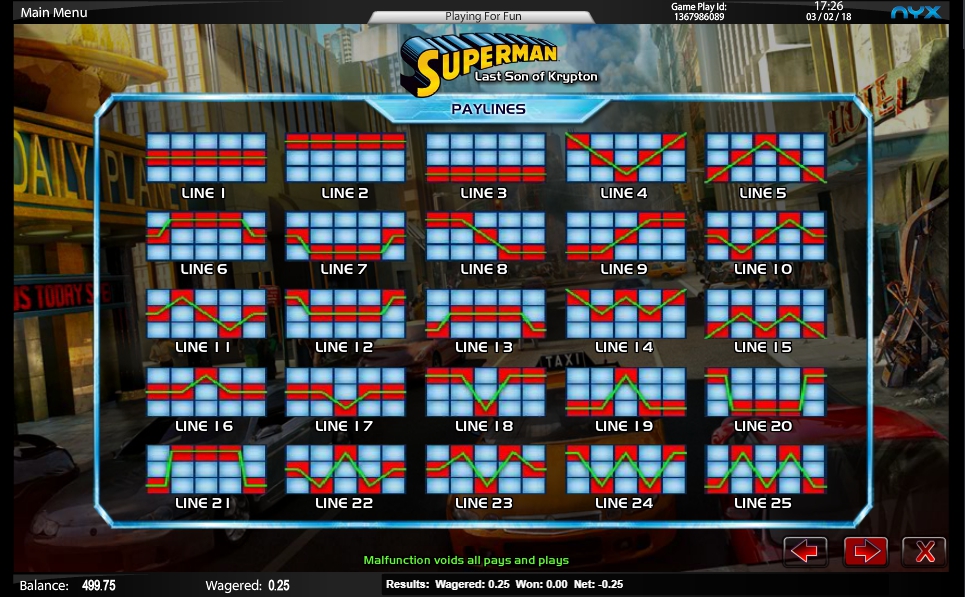 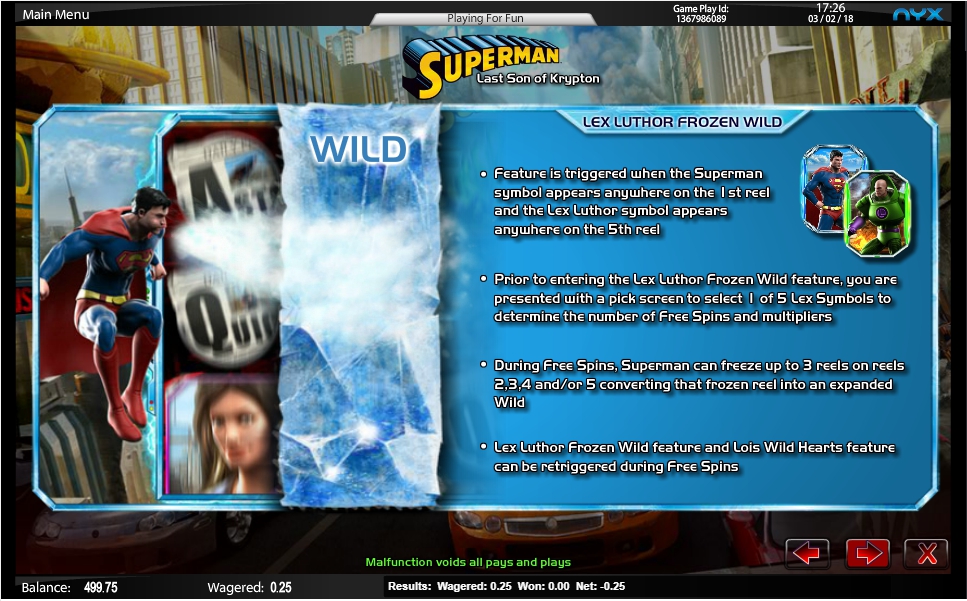 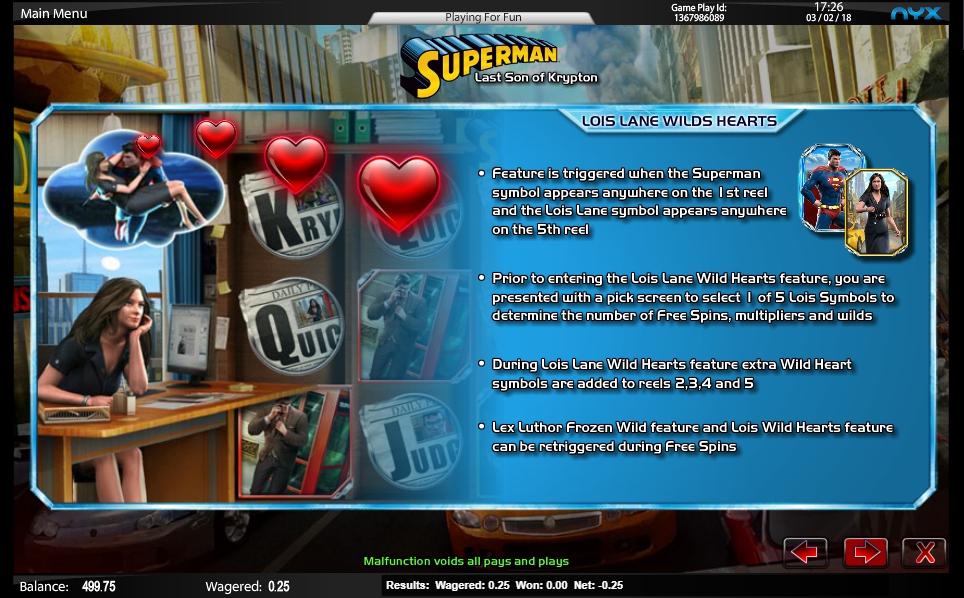 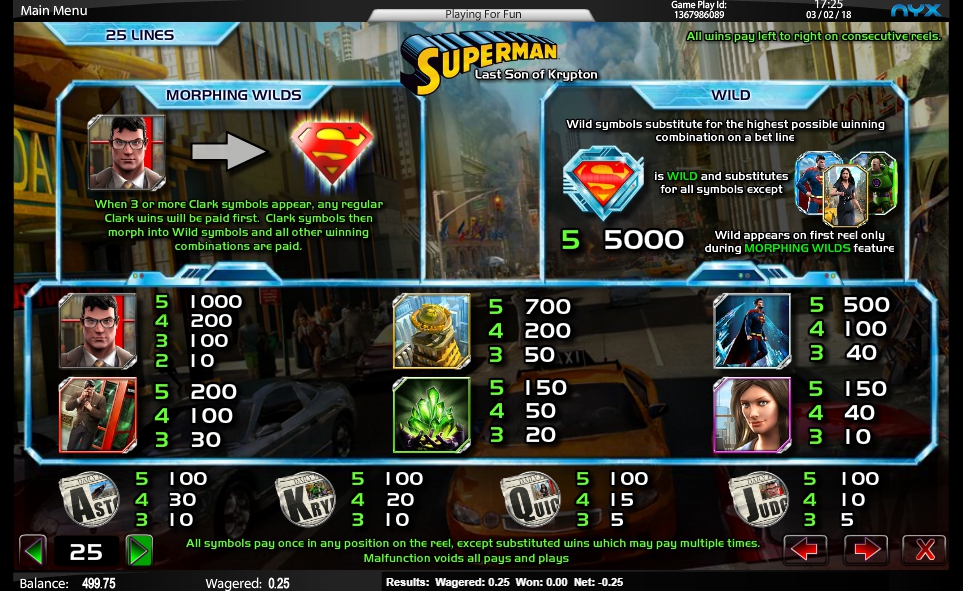 Comics about Superman have become to some extent a cult and inspired more than one film. Manufacturers of software for gaming machines also could not ignore such an exciting franchise. In particular, the company-maker of software for the casino Chartwell, Amaya Games, has released a Superman: the Last Son of Krypton video slot, which invites you to join the reporter Clark Kent in the mission to save the planet. You can play Superman: the Last Son of Krypton in free mode, or try your hand at play for money. The slot does not require download and installation and can be opened in any browser that has the latest version of Flash player.

General description of the Superman: the Last son of Krypton slot

The game screen of the Superman: the Last son of Krypton video slot looks like a comic page with a vivid illustration of the metropolis center. Here you will find pretty futuristic reels and convenient control buttons to adjust the parameters of the slot machine.

As for the interface itself, it is extremely simple and familiar to every player. The machine has several buttons:

Spin button in Superman: the Last son of Krypton casino game is stylized like Superman logo, and it adds some great atmosphere.
In general, this video slot is quite typical for Amaya software: it has standard 5 game reels and 25 active paylines, with the ability to put on each of them from 1 to 5 coins. The range of bets varies from 1 cent to 1 US dollar.

Game symbols of the Superman: the Last son of Krypton casino slot are pictures of Clark itself, skyscrapers, other characters of the Superman franchise, kryptonite crystals and card symbols, wrapped up as a newspaper headlines. Winning lines begin to form from the left reel, and must have at least three identical symbols. You can learn about the payout ratios in the table in the right corner of the screen. The repeated spin function significantly increases the chance of receiving large payments, so use it, even if you are not a high roller and do not play big. It starts after every winning combination, even with the smallest multiplier.

A wild symbol of the game is the Superman itself. It is activated, when you collect three or more icons with Clark’s face on the reels. Firstly, you get paid for every simple Wild, and then they turn into a Superman logo with an even larger multiplier. Second Wild symbol is called Lois Lane Wild Hearts. The game starts, if the Clark symbol appears on the first reel, and Lois icon is on the last. Lex Luthor symbols also can help you to increase your cash. They can freeze up to 3 reels and turn them into expanded Wilds, thus, your winnings will significantly increase. The jackpot in the game is 25000 bets, and you can double it if you win the standard bonus round for doubling, which requires you to guess the color of the card.

Superman: the Last son of Krypton free slot definitely will not only satisfy fans of adventure about aliens but in general all fans of fortune and excitement. This slot does not have any outstanding features, but it is good for its simplicity. You can play Superman: the Last son of Krypton for free in any Chartwell Casino, available in your country.