Wizards and sorcerers have always been surrounded by a halo of mystery and riddles. They had access to the secrets of the universe and could skillfully deal with their enemies. Manufacturers of software for the casinos often use the theme of witchcraft in their slots. For example, the company NetEnt, which regularly pleases gamblers with its gaming machines, has released the Spellcast video slot with several significant differences from its analogs, which you will learn about in the review. And you can play Spellcast in free mode, to learn more about all the nuances of this colorful slot machine in any online casino, working with the NetEnt’s partner license. 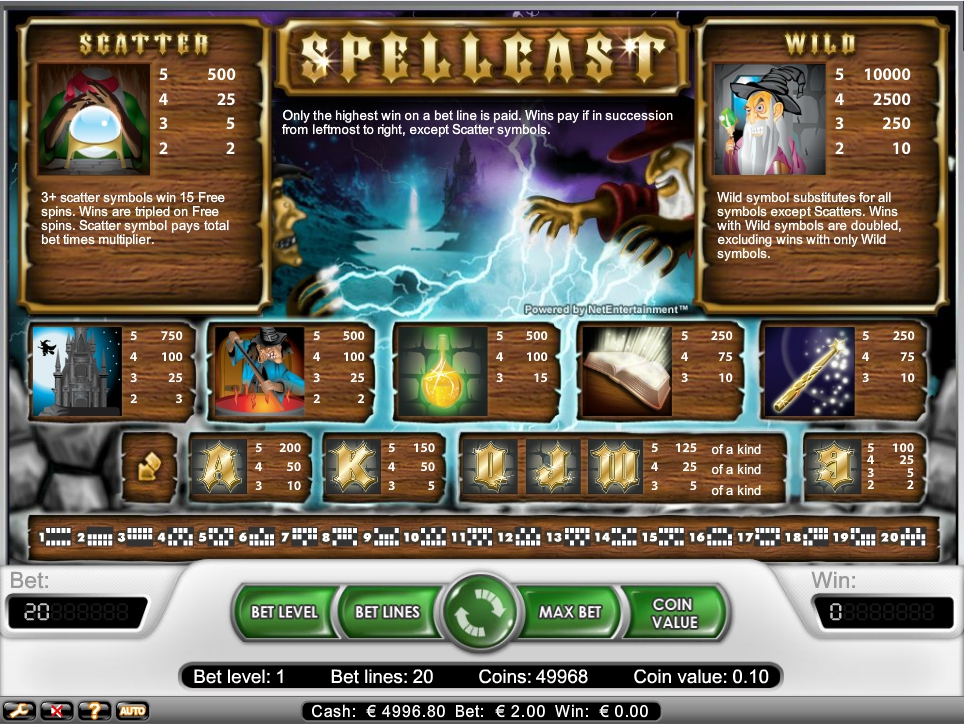 The game screen, executed in dark tones, housed a mysterious castle, probably full of bats and other strange and inhospitable creatures. The developers of the NetEnt did not stint on the sound design: cryptic sounds, mysterious music and a sudden ominous laugh, distributed as if from nowhere, only increase the immersion in the atmosphere of the Spellcast video slot. As for the interface itself, it is much simpler than the dusty magical manuscripts, and the game control buttons are familiar to every player:

In general, Spellcast gambling machine is quite typical for NetEnt: it has standard 5 game reels and 20 pay lines, with the ability to put on each line from 1 to 4 coins. The range of rates varies from 2 to 50 cents. Also, the slot machine has the most common recoil factor for this manufacturer’s slots – 96%, which is a very high result!

Before you begin learning magic and cast spells, you should familiarize yourself with the magic symbols that are abundantly represented in the Spellcast casino slot:

Also, the Spellcast gaming slot has special characters that can significantly affect the gameplay:

In addition, if your spell turns out to be successful and you collect an active line of 5 Wild symbols, then the main prize of a slot with a size of 10.000 game credits will not keep you waiting! It is worth it to compete in the magical art with an experienced sorcerer!

Leave a Feedback of Spellcast Slot