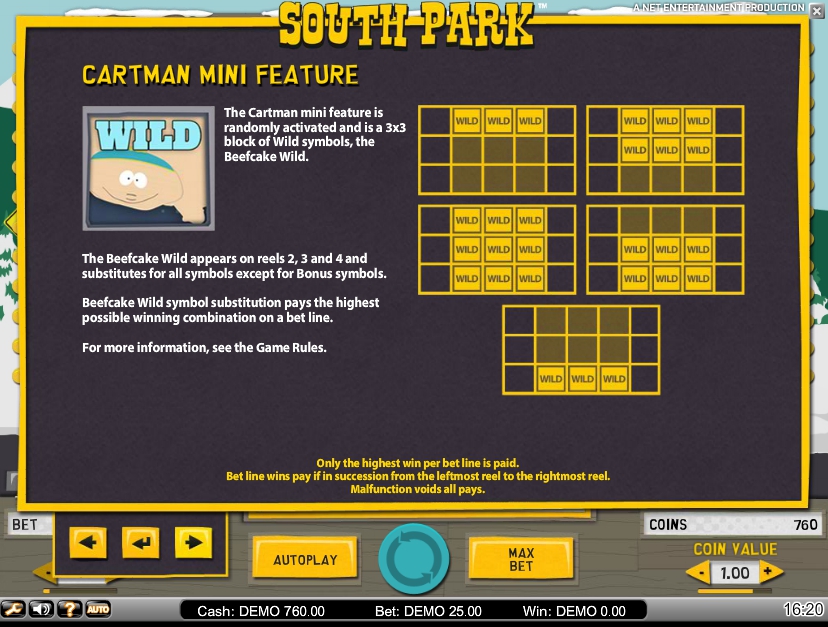 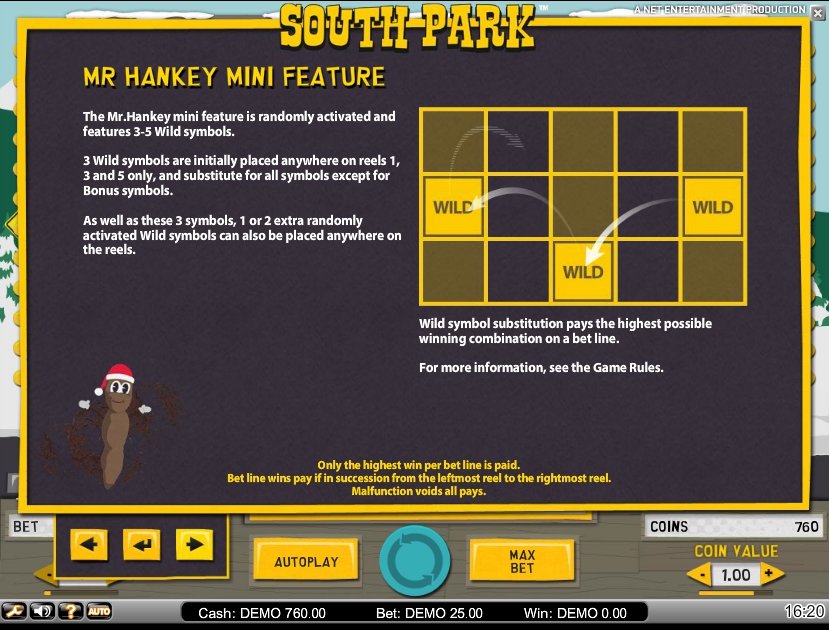 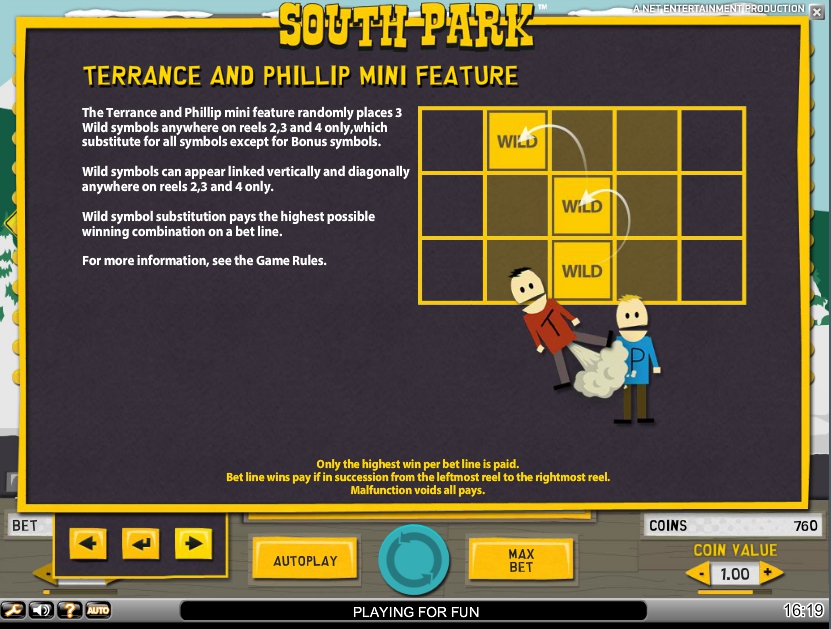 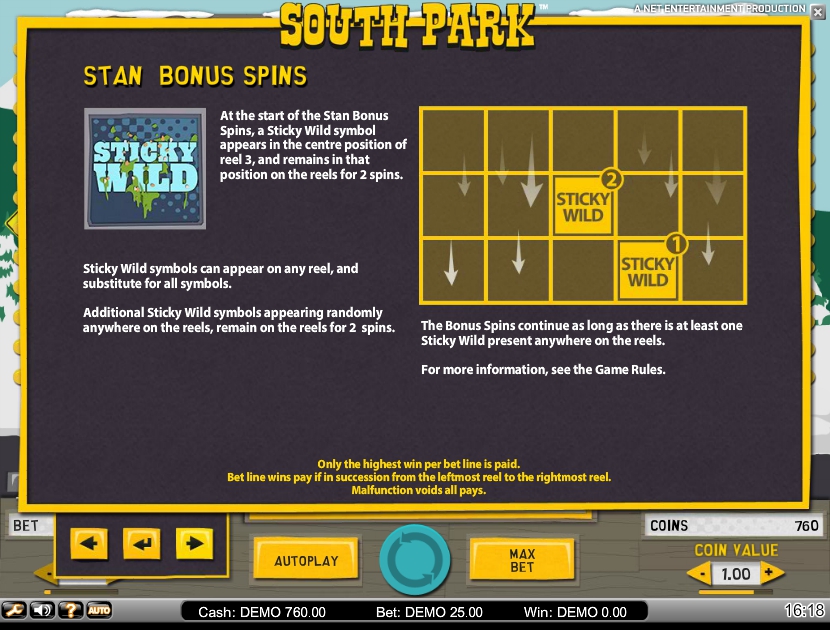 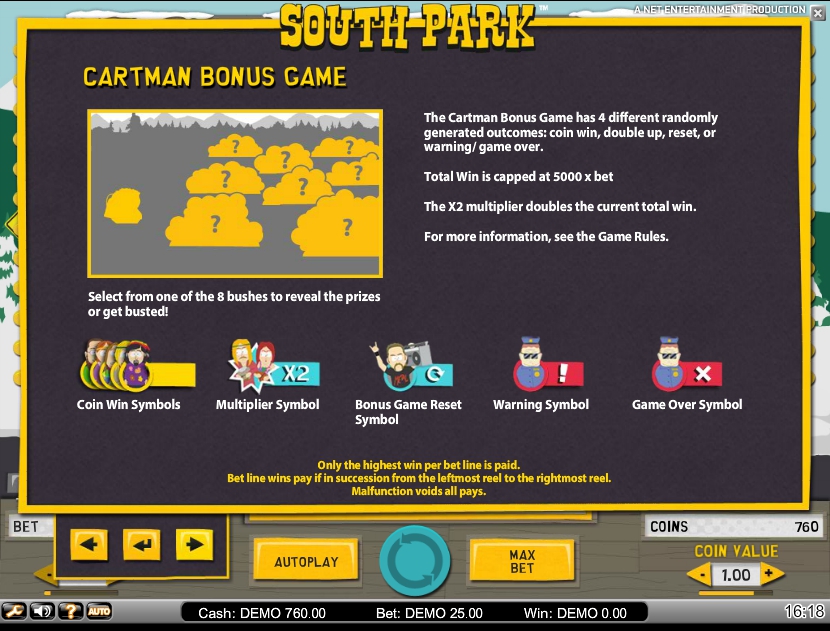 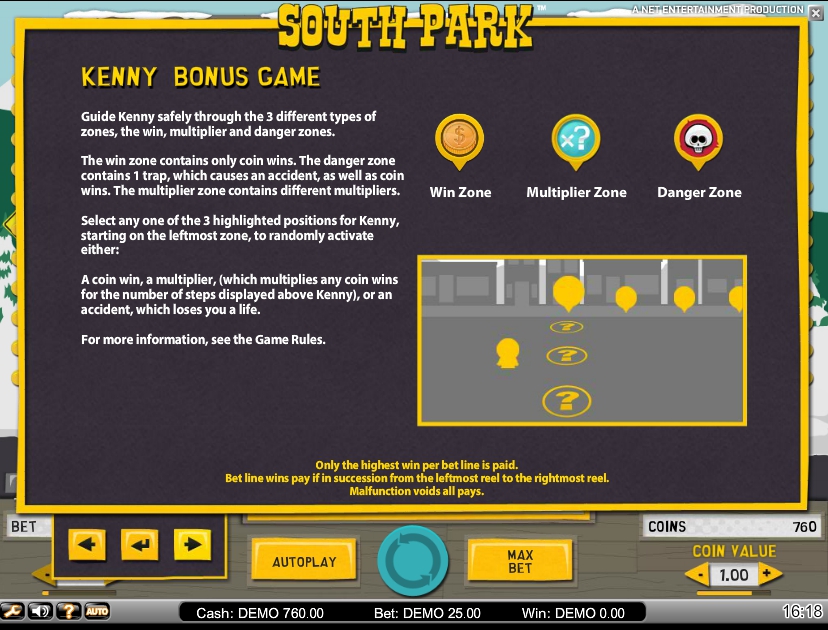 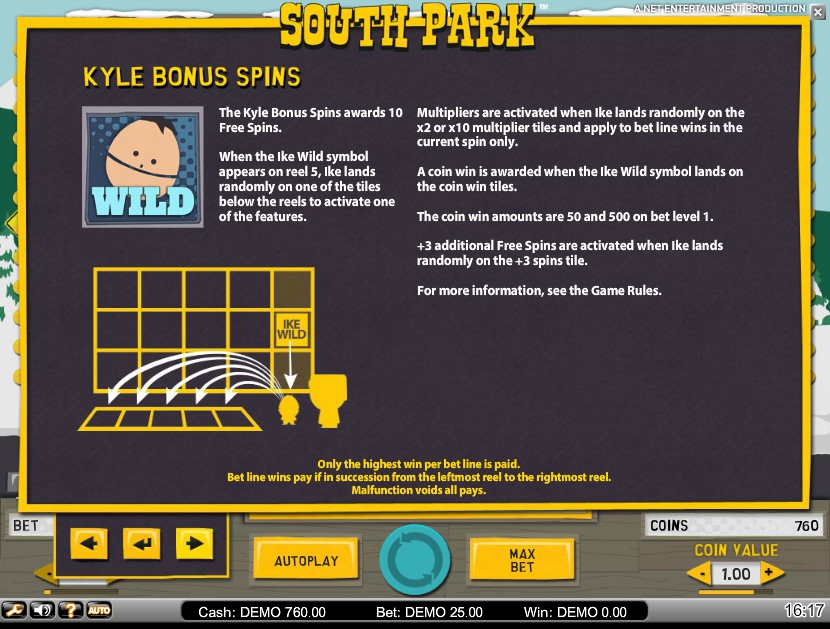 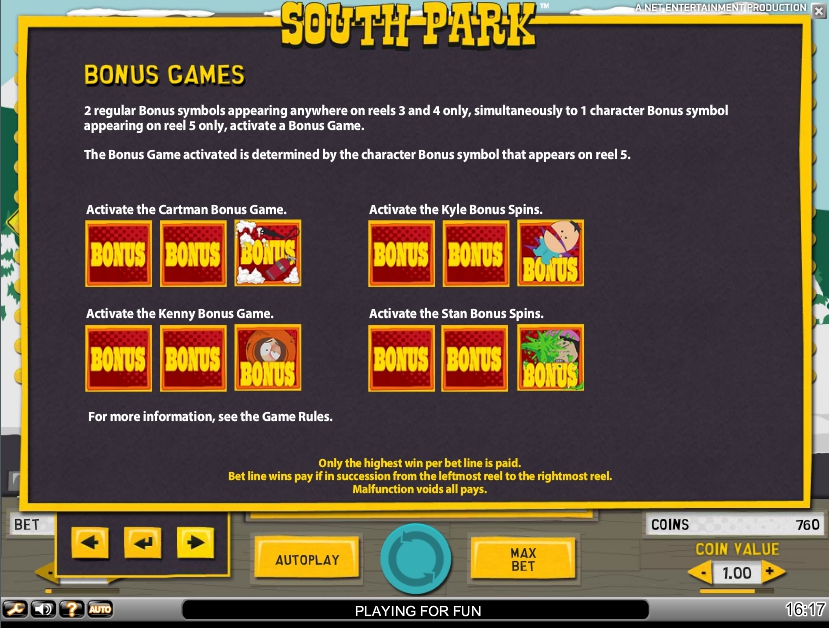 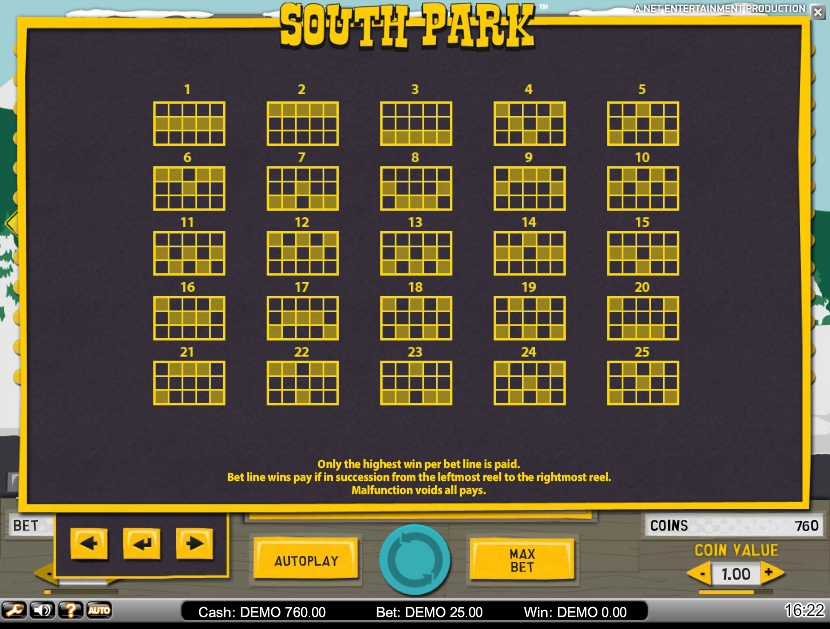 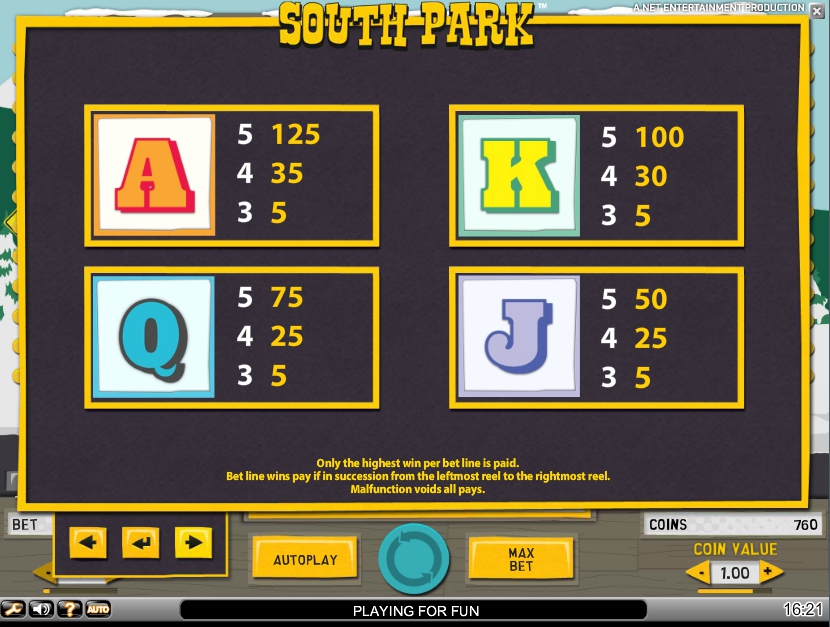 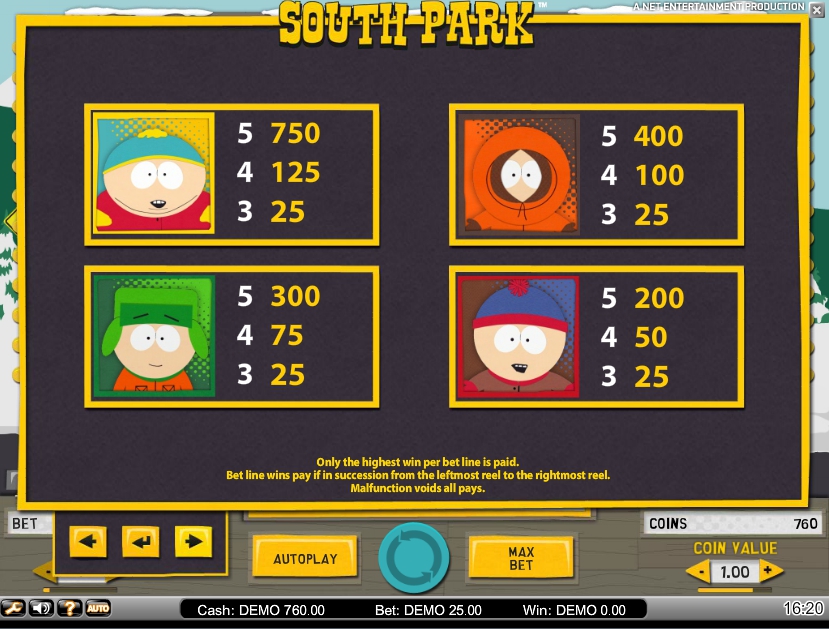 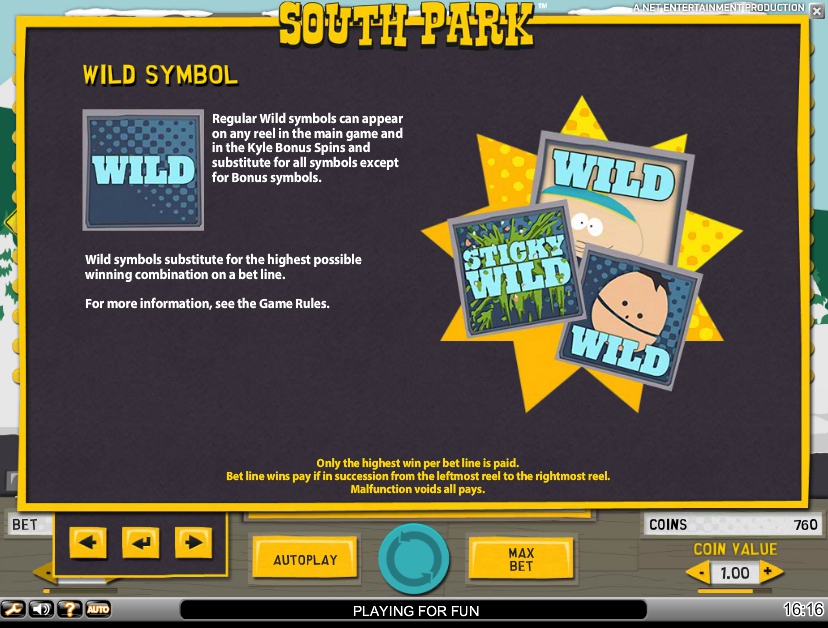 The previous South Park-themed video slot from the company NetEnt was very exciting for the fans of the cartoon, so the manufacturers decided to extend the series and released a new video slot South Park Reel Chaos! This gaming machine combines a bright and interesting design, sparkling humor, an incredible amount of bonus games and special symbols to increase the winnings, and, of course, a huge jackpot. In this slot, the heroes Cartman, Kyle, Stan, and Kenny will have to confront the mysterious Professor Chaos. Can you figure out which of the characters is hidden under the mask of Mintberry Crunch, the clever Raccoon or the mysterious Mysterio? Can you get back to South Park the usual order of things? The answers to all these questions you get by playing in the South Park: Reel Chaos in demo mode without registration, or making real bets in a real game.

The game screen of the video slot is no longer as sunny and joyful as in the first part. Instead, South Park plunged into the night, and the entire playing field was executed in dark colors. The slot has 5 game reels and gives the player the opportunity to bet on 20 active lines, the number of which he can activate at will. The range of rates is standard: from 1 to 50 cents. To place a bet, press the Level button and select the value of the coin. In addition, the slot is equipped with the usual buttons:

The main feature of the South Park: Reel Chaos free slot is a system of bonuses. Every hero – and here they are 4of them – has his own unique superpower, which pleasantly affects the outcome of the round for the player. It should be noted that all bonuses here fall randomly, and it is impossible to influence this process, which adds unpredictability and new sensations to the game! The Cartman bonus is wild symbols. They drop out most often on the second or third game drums. Wilds form a column and replace any character in the line with one that is not enough for the winning combination.

Kenny’s bonus randomly drops out after a winning active line. He fights with Professor Chaos and, depending on the success of the fight, gives you a winning multiplier of x3, x4, or x5. Stan’s bonuses are scattered. They are activated randomly if your round was losing and run the queue from the auto spin to the first win. In this case, the win multiplier is increased by one with each new rotation – from x2 to x10. Kyle’s bonuses are Sticky Wilds. When the servants of the professor appear on the playing field, Kyle shoots them from the laser gun and thus activates from 1 to 3 special characters. When Sticky Wilds appear on 1, 3 and 5 drums, the main bonus game, Mintberry Crunch, is activated. During this bonus round, you need to defeat 4 enemies. For each win, you get a multiplier of x4, and thus, after completing the bonus level, you can increase your winnings by 16 times!

The South Park: Reel Chaos is a unique slot that will not leave indifferent fans of this animated series, and people far from it. Bright graphics, a non-trivial storyline and a huge number of bonuses are what you need to get a sea of ​​positive impressions!