You can not play this game for free
For free slots game go
Play free
or
(20 votes)
Game Played: 5
Full screen: close 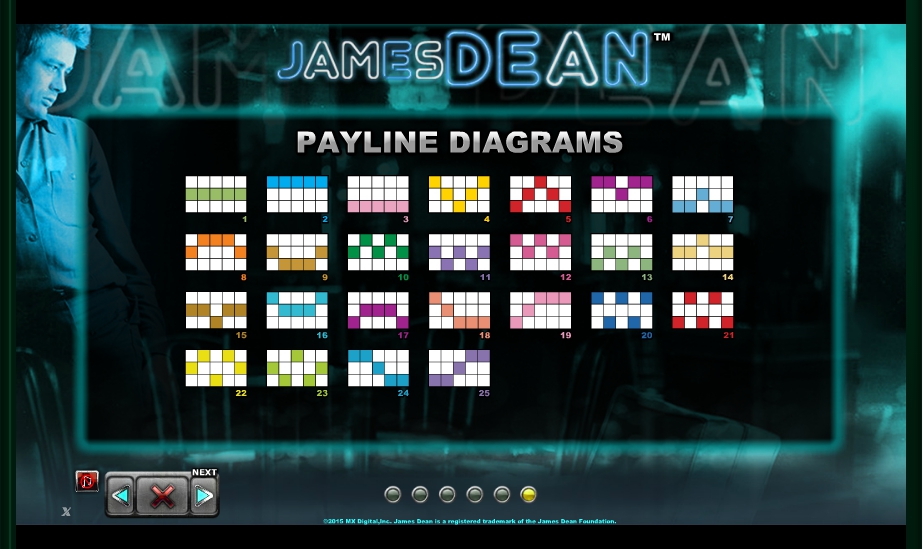 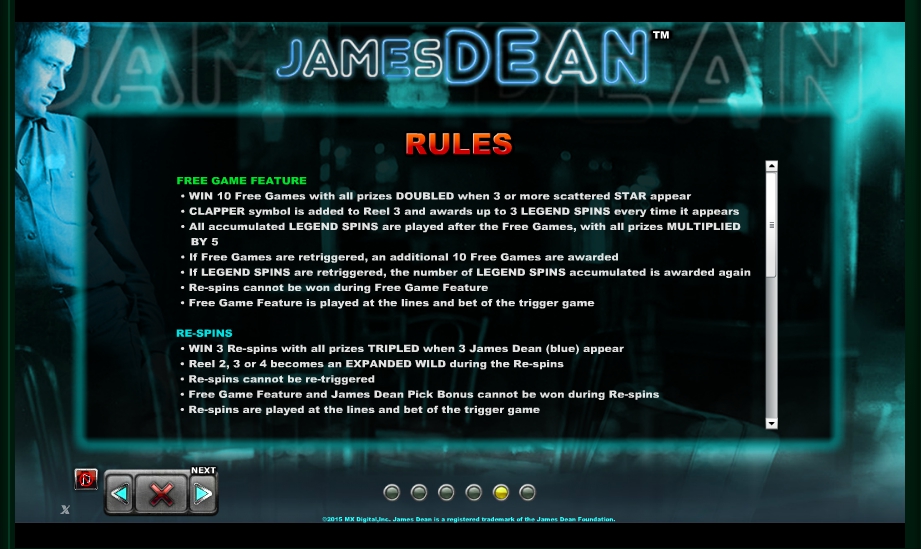 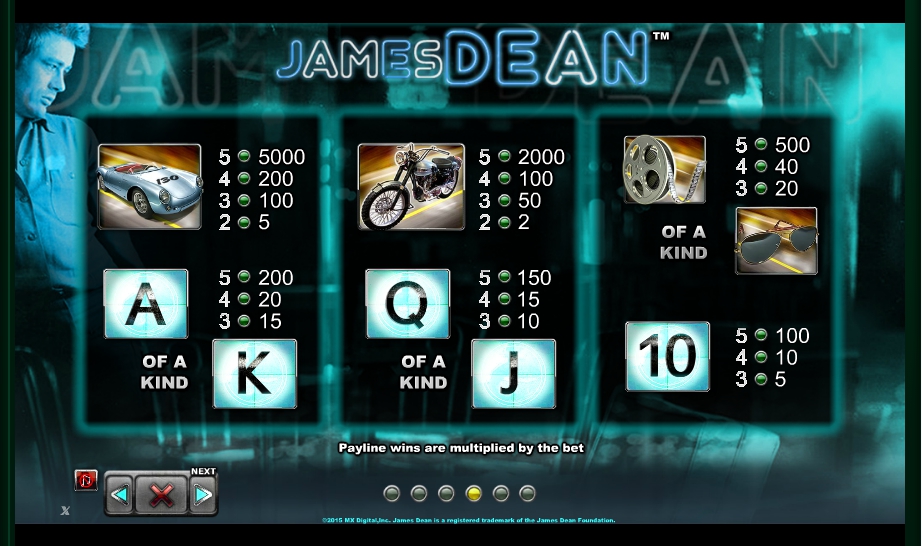 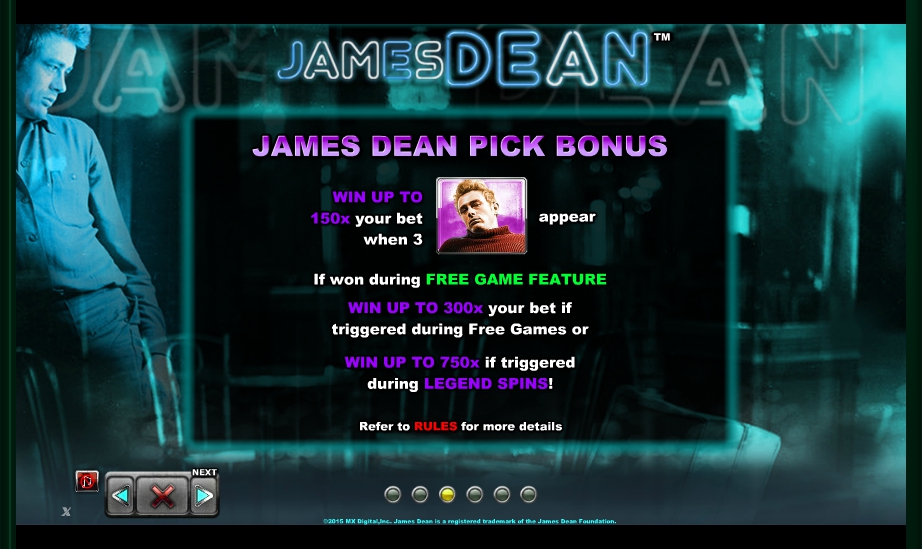 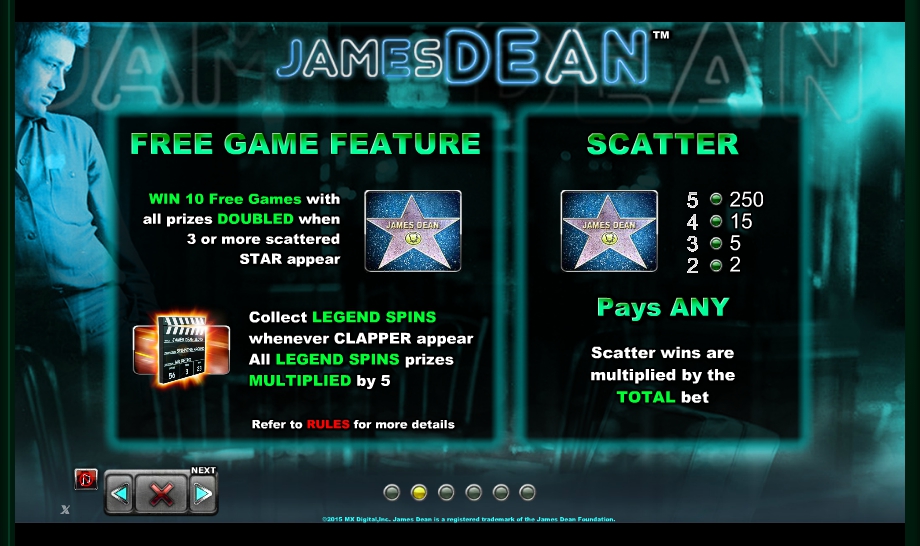 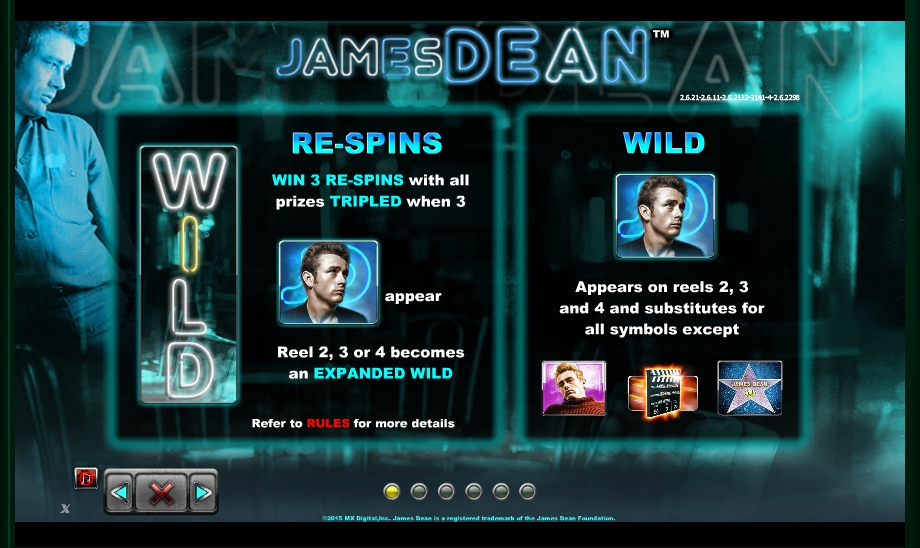 James Dean as an actor was very popular in the 50s of last century. He was born on February 8, 1931. After the death of James’s mother, the father of the boy was forced to ask his sister who lived on a farm in Fairmount to take care of the boy. Later the child was brought up by Quakers, representatives of the Religious Society of Friends. At 11 the boy was sexually abused by DiWard, who was a priest of the Quakers. James dropped out of college and took up acting career after receiving his first role.

In anticipation of roles, Dean worked as a parking man. Prior to his tragic death, the actor managed to play only three serious roles. Works in “The Rebel Without a Cause” and “To the East of Paradise” made Dean an idol for the American youth of the 1950s. The actor died in a car crash on his new sports car. The last film with the participation of the actor was “Giant” released after the death of Dean. Developers of online video slots often use the names or nicknames of famous people to create themes for slots. The NextGen Gaming decided to dedicate this 5-reels slot to actor James Dean.

The gambler is greeted by a bright screen saver, reporting on all the bonuses in gambling. The squares on the reels and a control panel are decorated in black and neon blue colors. The silhouettes of the actor are viewed in the background. A sports car, a cassette with film, sunglasses, a star on the glory alley, playing cards, and a portrait of Dean were chosen as the slot elements.

On the right, a green square with twisted arrows provides access to the Autoplay mode. The white arrow in the green rectangle is the Start key. 25 pay-lines like the accordion buttons are located to the left of the reels. They are all active. The Total Bet and The Balance are highlighted in the green information windows.

Playing cards may provide up to 200 points. Five elements of the cassette with film, and sunglasses will bring 500 points. Five motorcycles will provide 2000 points. A sports car jackpot is 5000 points for five elements. After each victory, the gambler can enter the Gamble program by pressing the “Heart & Clubs” key to double the wins.

If the gambler notices a clapper element, he will be invited to the Legend Spins bonus program. Each clapper provides three free rotations and a multiplier 5X at the end of the round.

The gambler can also be invited to a generous bonus program. When a portrait of James Dean appears on the screen in a red sweater, the current bet will be increased to 150X. If this element falls during free rotations, the sum will be multiplied by 300X. If his portrait appears during the Legend Spins, the amount will be increased in 700X.

The James Dean slot for free

Actor James Dean was a gambler and probably visited Las Vegas many times. The NextGen Gaming has not in vain chosen his image for the slot.

For novice gamers who do not desire to risk real money, the slot offers demo coins without registration. The gamer ought not to download the slot to his device and can gamble for free.