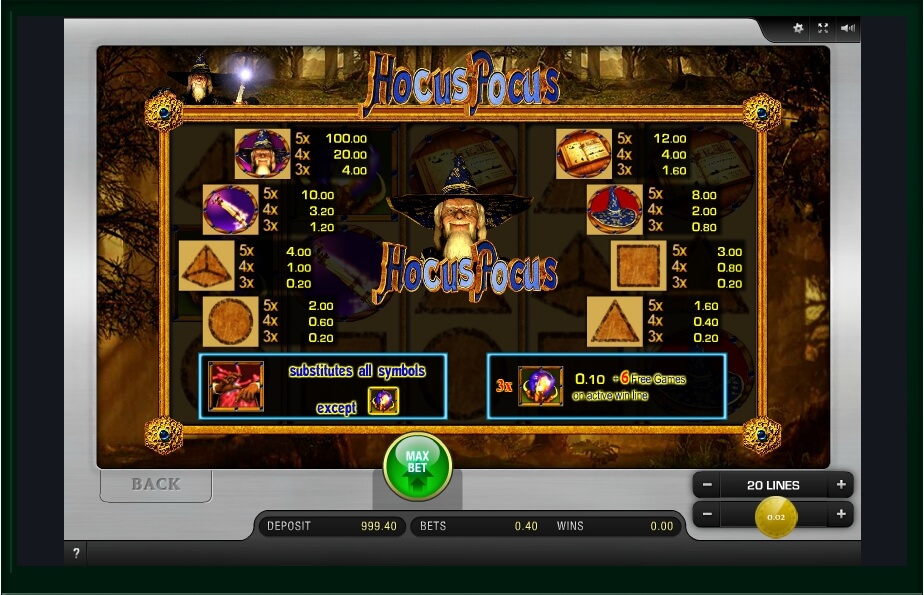 The great wizard and prophet Merlin, probably, is the character that became a prototype for all powerful wizards. His life is full of riddles that no one can solve. By the way, scientists cannot say unequivocally whether this magician actually existed. The Hocus Pocus emulator is the development of the Merkur company, so the proposed magical world will be very fascinating. The magic forest is full of mysteries and treasures that are available to every traveler. Despite the fact that this is a popular topic, the developers were able to surpass competitors and modern analogues.

This slot machine has the best qualities. Here an incredibly beautiful animation awaits the participant and accompanies all the game processes. In addition, original design and musical accompaniment will transfer players to the magical forest where the most powerful wizard lives. According to one of the legends, Merlin was born from the union of an earthly woman and a demon.

He was assigned the role of the Antichrist, but the mother of the child repented and confessed her sin. Therefore, the sorcerer was personified as a good magician. For the player not to get lost in the forest, he or she will be accompanied by Merlin who is at the top of the screen. Forest on the background was qualitatively depicted by graphic designers.

Five reels are surrounded by 20 cells that correspond to all available lines. The name of the gaming machine was depicted using 3D graphics. All attributes of the magician will appear on the game board. The control panel does not include complex rules, so it is available to every player. However, magic is a complex and dangerous science, so you need to study its features in the theoretical section.

To do this, click once on the inscription “paytable”. The player needs to learn all the symbols and payouts, after that he or she can adjust the game indicators. “Lines” and “Bets” functions have additional adjustments (+ and -) that will help to set the number of active lines and also bet on the round. Rotations are triggered by one of the large buttons. Thanks to additional settings, the participant can choose the game mode and also mute the sound.

During the game session, the main prize of the video slot will be played. Playing at the maximum bet and on 20 paylines, the gambler can receive up to 250 thousand credits. For this, it is necessary that several identical images appear on the playing field. After this happens, the winning line will glow, accompanied by sound effects.

Since the game session is very lucrative and dynamic, the developers do not offer to participate in an additional round. By the way, the participant cannot use additional symbols and options. On the other hand, the gamer can learn magic for free and without registering in our online casino.