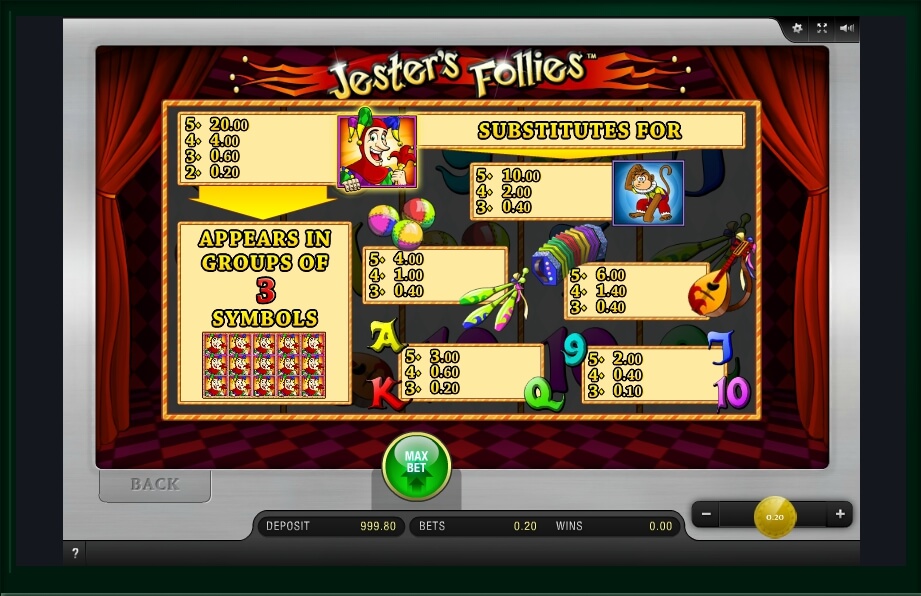 In the Middle Ages it was accepted to the master at court to have a jester. The duty of this man was to amuse the lord`s guests. In fact, this position was quite important. For a king, the fool was a symbolic twin. Since this topic is very popular among users, each manufacturer invites us to visit royal palaces and try on the role of a jester. A young and successful corporation, Merkur, corresponds to modern trends, so it gave an opportunity to relax in the royal palace. “Jester`s Follies” has tremendous features and characteristics.

As a rule, jesters are associated with the Middle Ages, because at that time they were the only entertainment. It was customary to call jokers people who were at the royal courts. Their duties included entertaining the monarchs with jokes and amusing antics. As a rule, buffoons wore hoods with three long ends, personifying donkey ears and a tail.

Of course, the slot machine is made in bright colors. The background is made in the form of a tent that opens before the user at the beginning of the game. The playing field is located on a motley background, where you can see 5 reels with 10 active lines. Here a jolly jester as well as his attributes will appear. Above is a logo. In the upper right corner, there are additional settings with which you can turn off sound effects and open a theoretical section. Here is the table of payments as well as the rules of the game process.

The main control panel as always is at the bottom. Here are all the keys that control the game process. In addition, you can bet on all active lines. The last parameter is activated by default, and you cannot change it. The bet is determined using the “bet per line” button and will be displayed in the corresponding window.

As with most Merkur products, the rotations here can be activated in manual or automatic modes. If the player wants to activate the second mode, then he or she needs to set the number of continuous rotations.

Each player needs to create a chain during the game process. Winnings will be calculated according to the table of payments. After that, an opportunity to take part in the risk-round will be opened. The first option suggests guessing the color of the last card to increase the payment twice. If the player makes a wrong choice, the last payout will be canceled and he or she will return to the main mode.

The second version of the risk-game has the form of a monetary ladder. The participant needs to go higher while choosing high payouts. Once the user makes a lower choice, all winnings will be lost. At any time, you can stop and pick up the prize. The player can click on the money button to withdraw the prize without activating the risk game. But it’s worth noting that this is a great way to win real money, as the developers do not offer any bonus options.