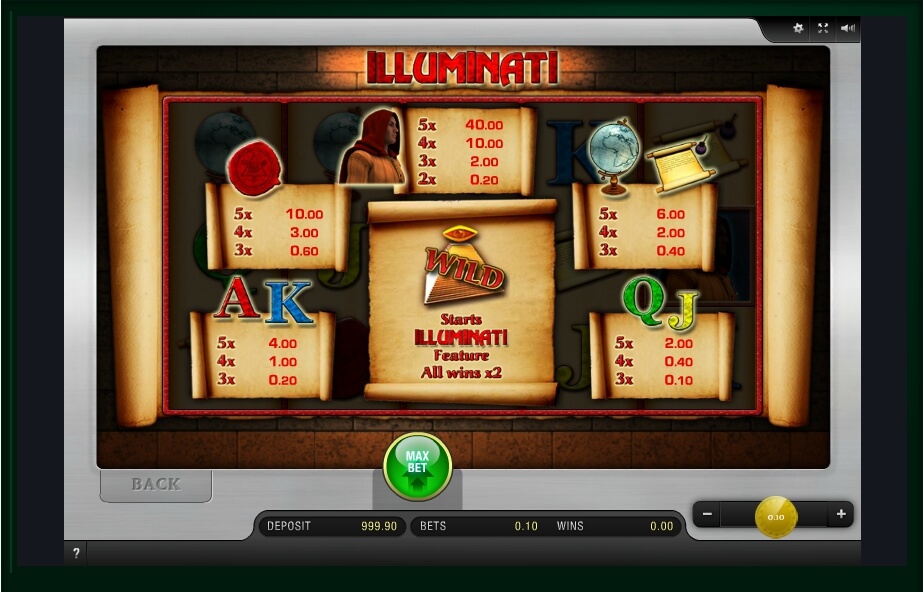 Many of us have heard about the Illuminati, but not everyone knows what this society does. Scientists claim that this secret organization has been existed for two thousand years, and often changed its names so as not to attract people’s attention. All the Illuminati greatly valued their own lives, even though they knew of the multitude of incarnations. Each of the participants in the society received special training after pre-selection. The Illuminati video slot from Merkur invites the player to permeate this secret society and learn all the secrets.

However, there is another version, according to which the Illuminati appeared in the Middle Ages. Then the group was a secret enlightenment society of scientists who fought against the persecution of the Inquisition. Some conspiracy theorists maintain that this community exists until now and performs secret functions. So it controls the politic structures and all important events in the world. With these details in mind, the amazing slot machine was created.

Here, every detail is filled with secrets and mysteries. After opening the game, the user will enter the room where the Illuminati meeting is held. Here, the group members discuss important tasks and also outline their mission. By the way, the developers managed to convey the atmosphere of secrecy with the help of graphic and sound effects. On a piece of paper, there is a playing field that consists of 5 reels and 5 paylines. During the gameplay, there will appear thematic characters that remind you of the main story.

Below is a board of government that directs the game. In order not to attract attention, the player needs to study the theoretical section. The “paytable” tab contains information about symbols, payments and rules. After the user reads this section, he or she needs to make the bet, on which the outcome of the game will depend. This action is carried out with the help of the “bet” button and its additional regulators. Rotations will be activated after you click on the large button.

Such a mystical theme of secret groups was first played in the field of online casinos. To ensure that the video slot was successful, the developers applied all their knowledge and skills. To get into the group of Illuminati, the participant needs to learn the rules.

The image of one of the members of the group pays the best. Therefore, the player can receive up to 2,000 credits for several such images. Since “classical” rules operate in this emulator, the user needs to collect several identical pictures to get real money.

The developers offer a lucrative and dynamic gameplay so you do not have an opportunity to use additional options and rounds. Every guest of our online casino can unravel the main mystery in a demo mode. It allows you to play for free, in addition, the client does not even need to go through the registration process.