You can not play this game for free
For free slots game go
Play free
or
(16 votes)
Game Played: 7
Full screen: close 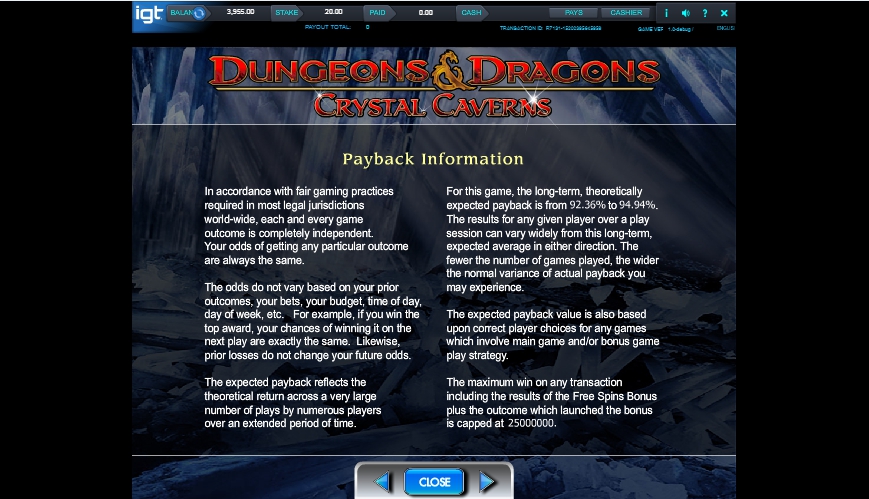 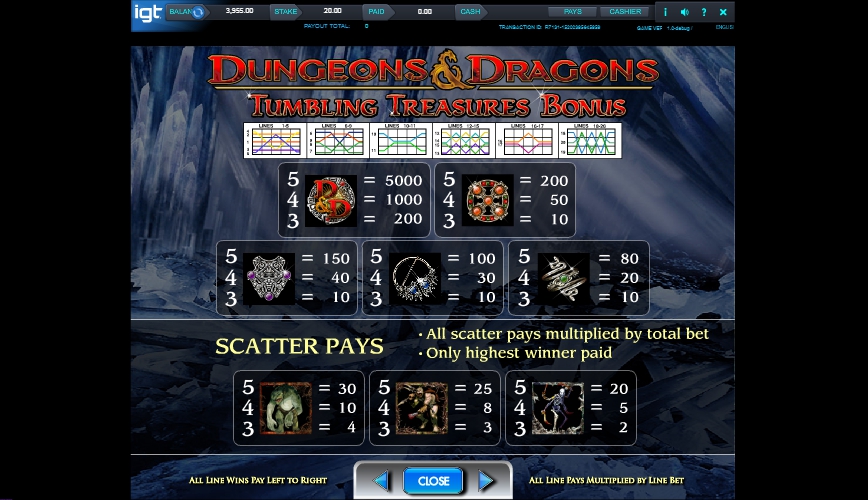 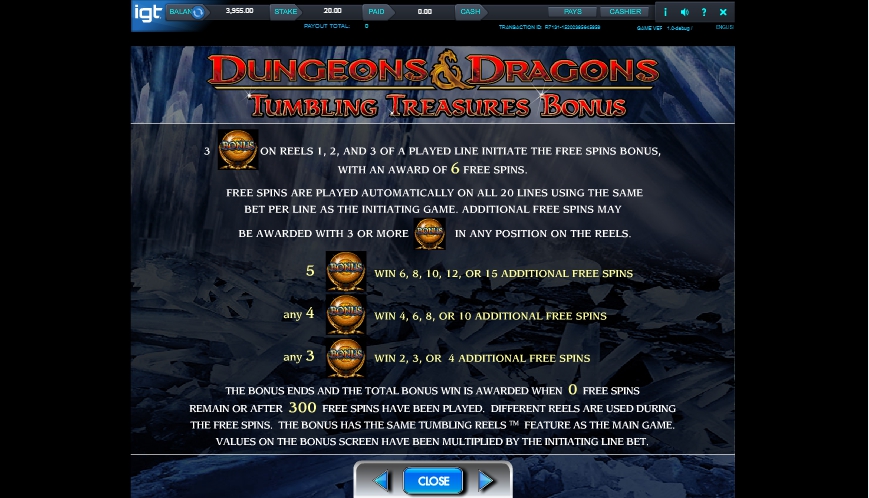 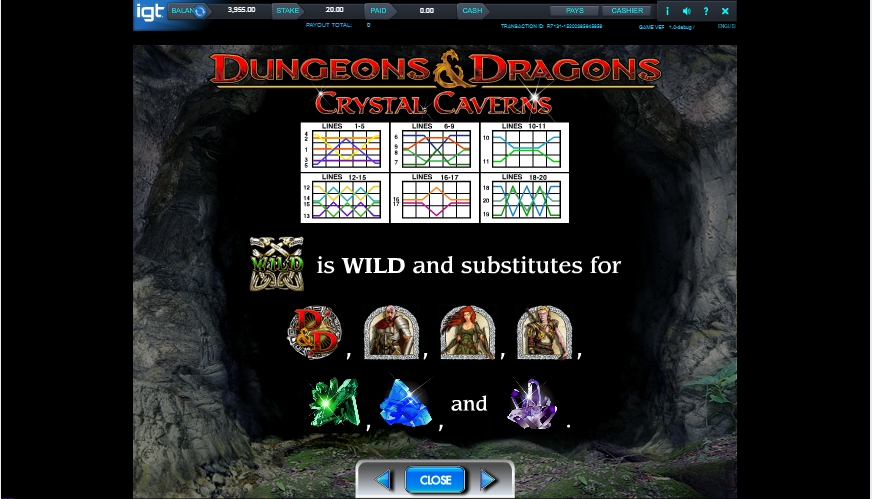 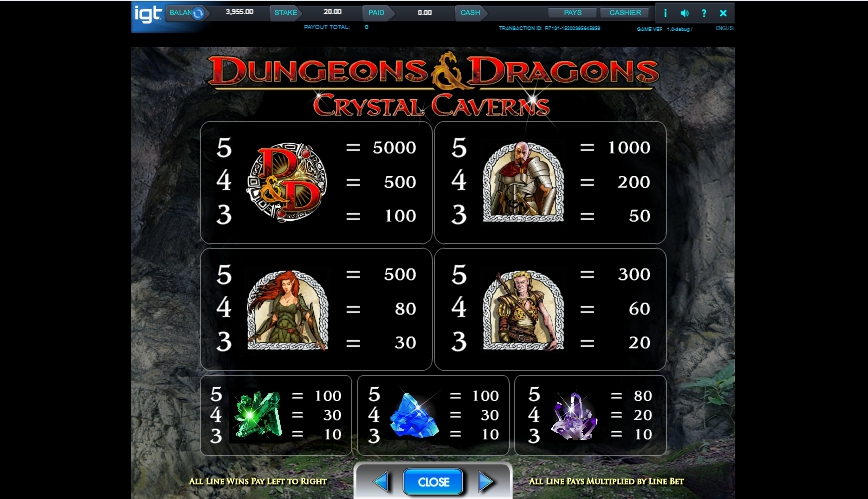 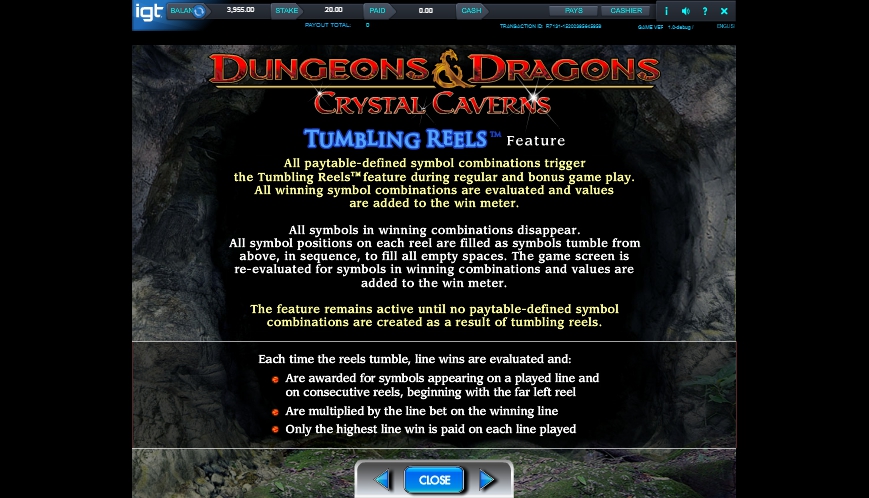 Dungeons and Dragons board game keeps a lath of leadership among desktop role-playing games for a long time. First of all, thanks to its interactive gameplay mechanics, the outcome of any game depends on the luck of each player in the team. Developers of software for virtual casinos from IGT (WagerWorks) decided to make an unpredictable plot of the game even more random and created the Dungeons and Dragons: Crystal Caverns video slot, playing which, in case of a successful outcome of the mission, you can receive a generous reward. The slot will please not only the avid fans of the original game but also all those who want to join this fantasy world.

The game screen of the Dungeons and Dragons: Crystal Caverns casino game is created in the form of a cave directly, in the depths of which different magic crystals are hidden. The design is very bright, but it does not distract from the main element on the screen – playing reels. They are here invisible, that is, you will not see borders, but the overall outline is made in the form of a patterned frame. Under the reels is an interactive table of winning combinations, as well as the already familiar to each gambler buttons for the control of the gaming machine:

Like all slot machines from WagerWorks, the Dungeons and Dragons: Crystal Caverns slot has 5 game reels and 20 active lines. For each of them, you can put from 1 to 5 coins, but the range of available denominations of the wager is quite impressive – from 1 cent to 1 dollar. The slot machine also offers players to compete for a nice jackpot of 5000 game rates, and the chances of getting it are quite high because the slot’s payback ratio is 94.4%.

The game symbols of the slot echo the original game. Here you will see representatives of different classes of characters: a warrior, a mage, a druid, a battle elf, and many others. In addition, separate kinds of symbols are colored crystals that form combinations with each other practically at every rotation. Also in the Dungeons and Dragons: Crystal Caverns video slot, there are also special characters that affect the gameplay:

And to become the lucky owner of the jackpot, collect 5 Wild symbols on the active payline, playing with the maximum wager.

WagerWorks always competently approaches the release of each of its slots, and Dungeons and Dragons: Crystal Caverns is no exception. Here we see a well worked-out plot, appropriate design, and a great sound, as well as the availability of pleasant bonus options and a good main prize, which is worth fighting for. The slot will definitely appeal to experienced gamblers, and if you are new, then you can play Dungeons and Dragons: Crystal Caverns in a demo mode in our casino.