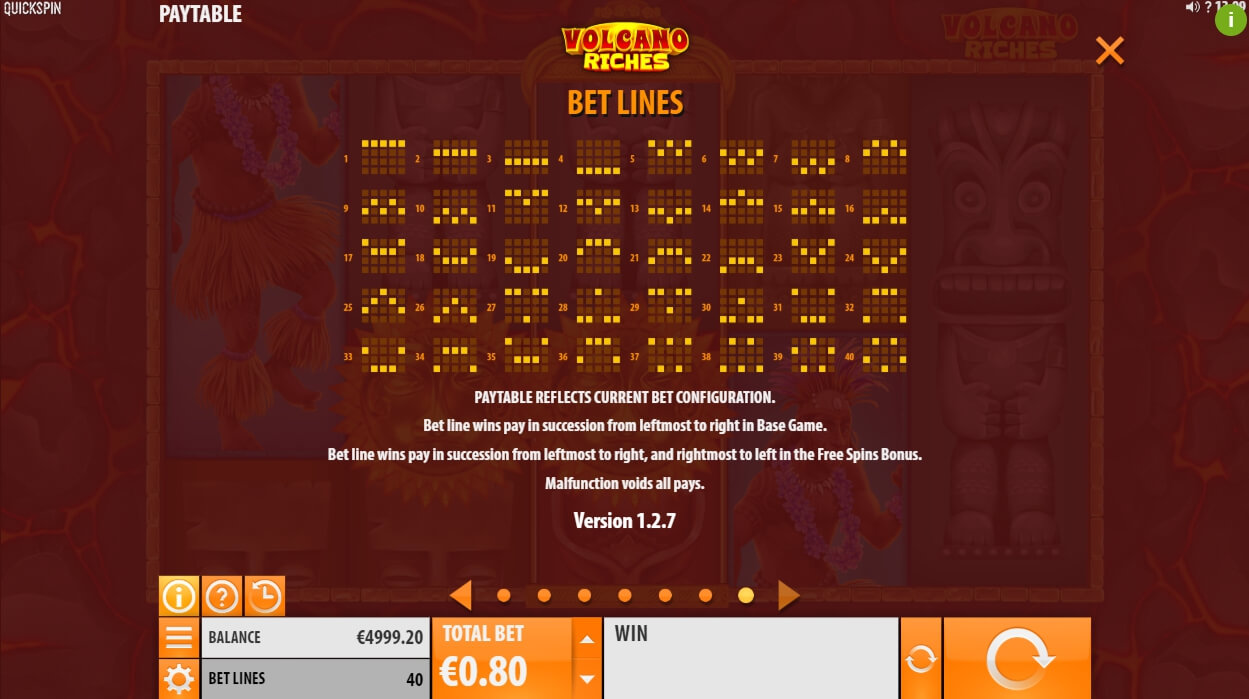 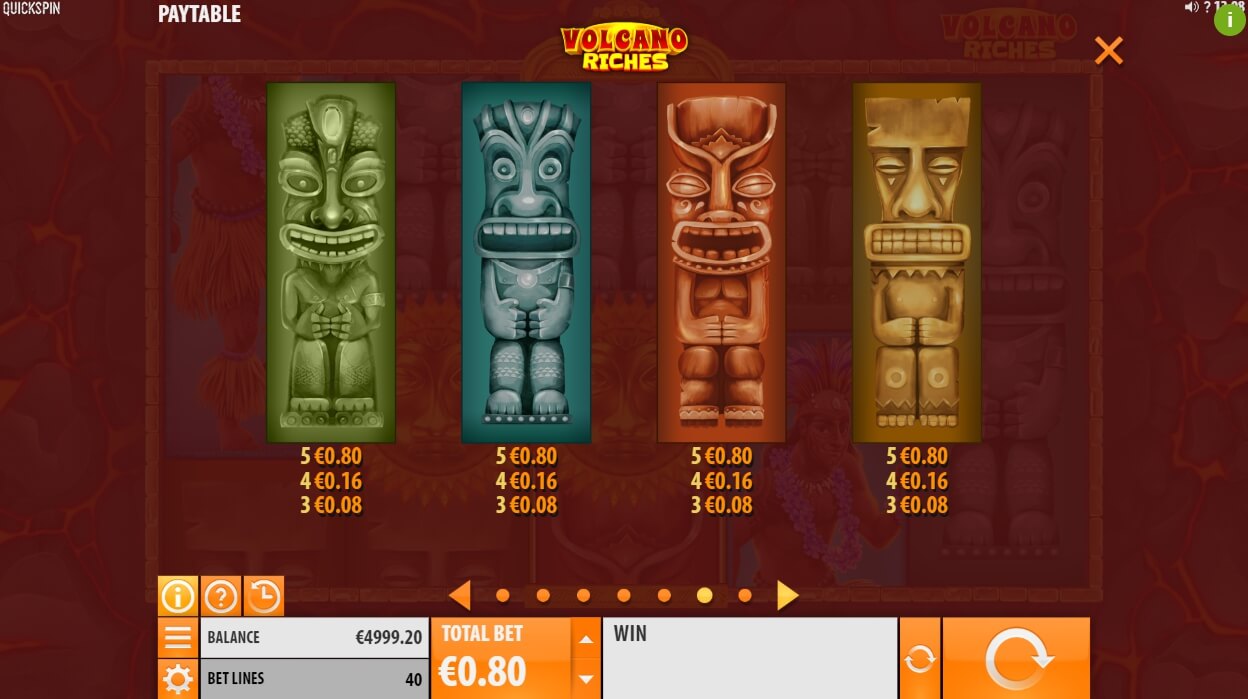 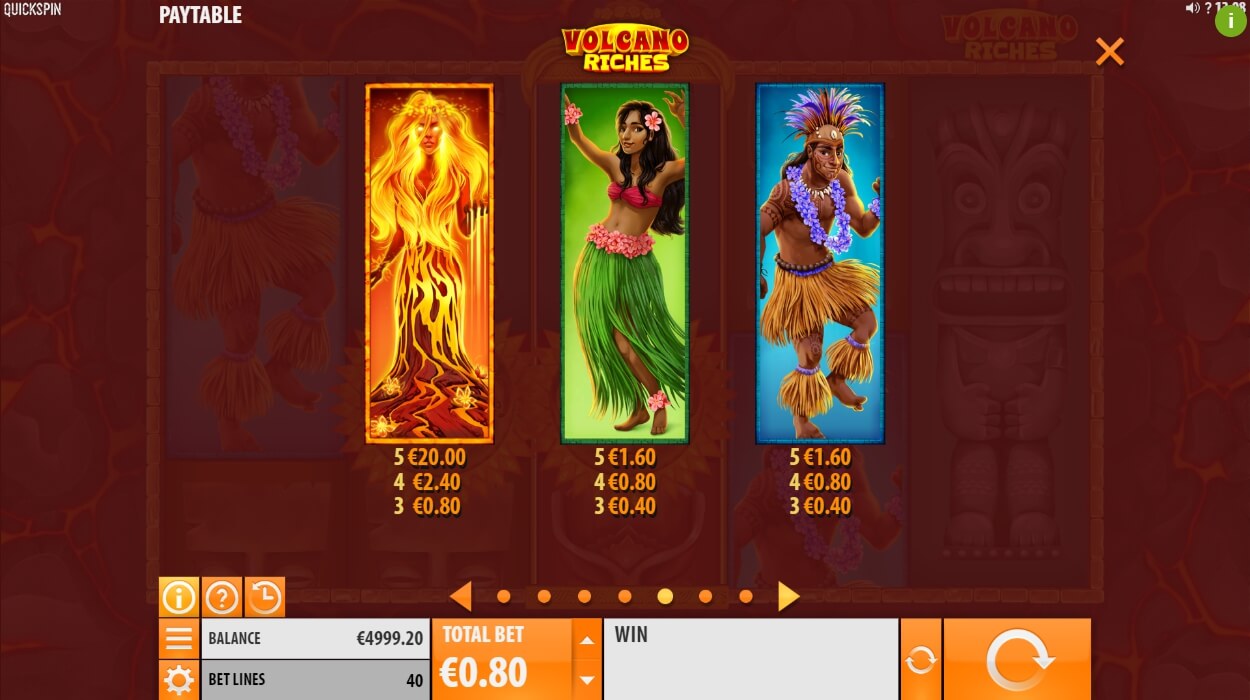 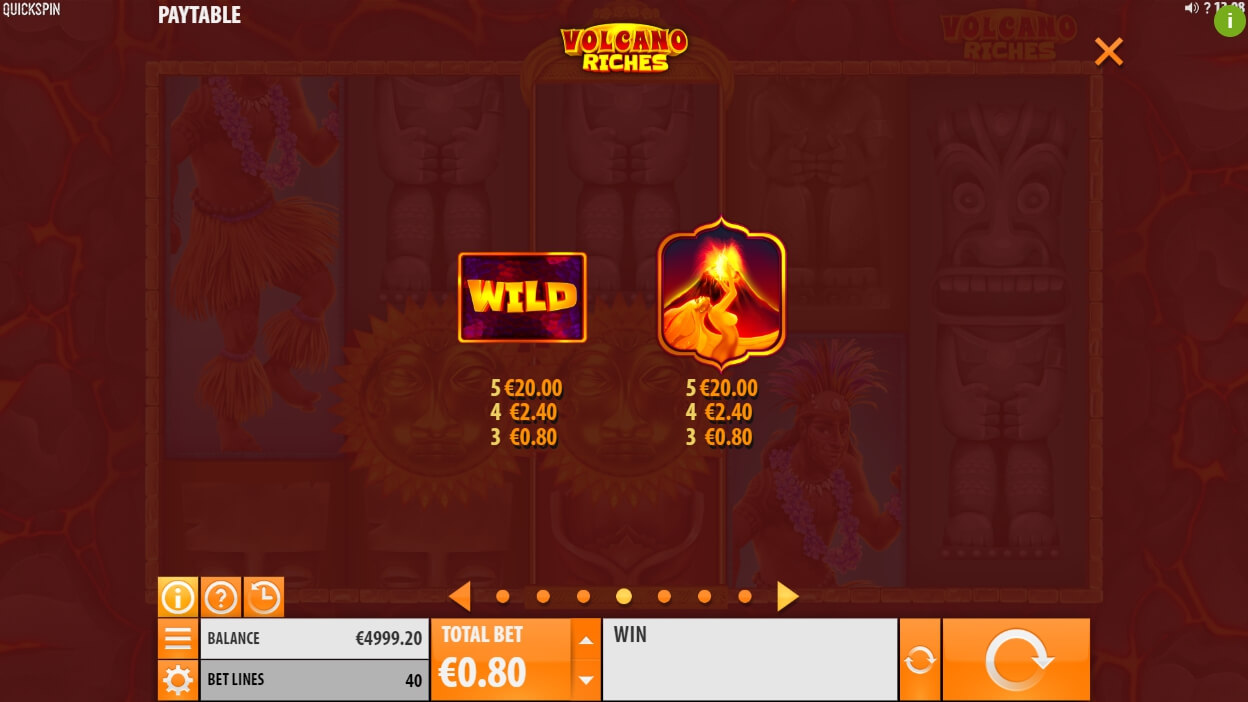 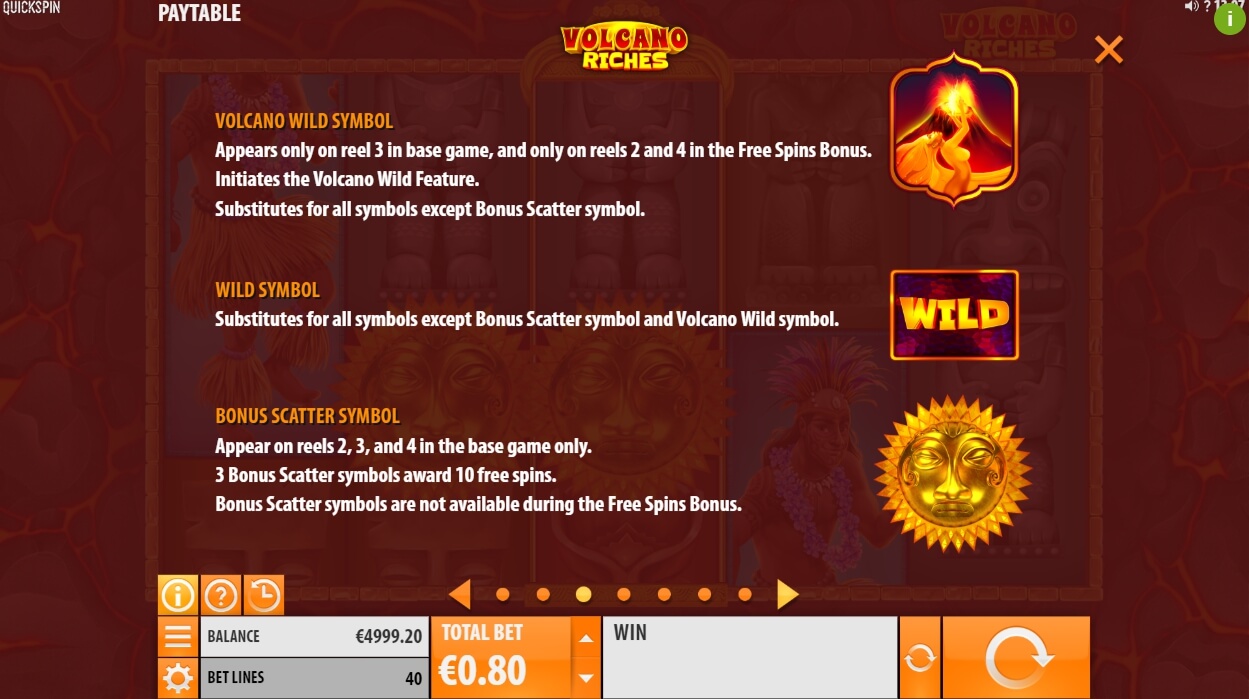 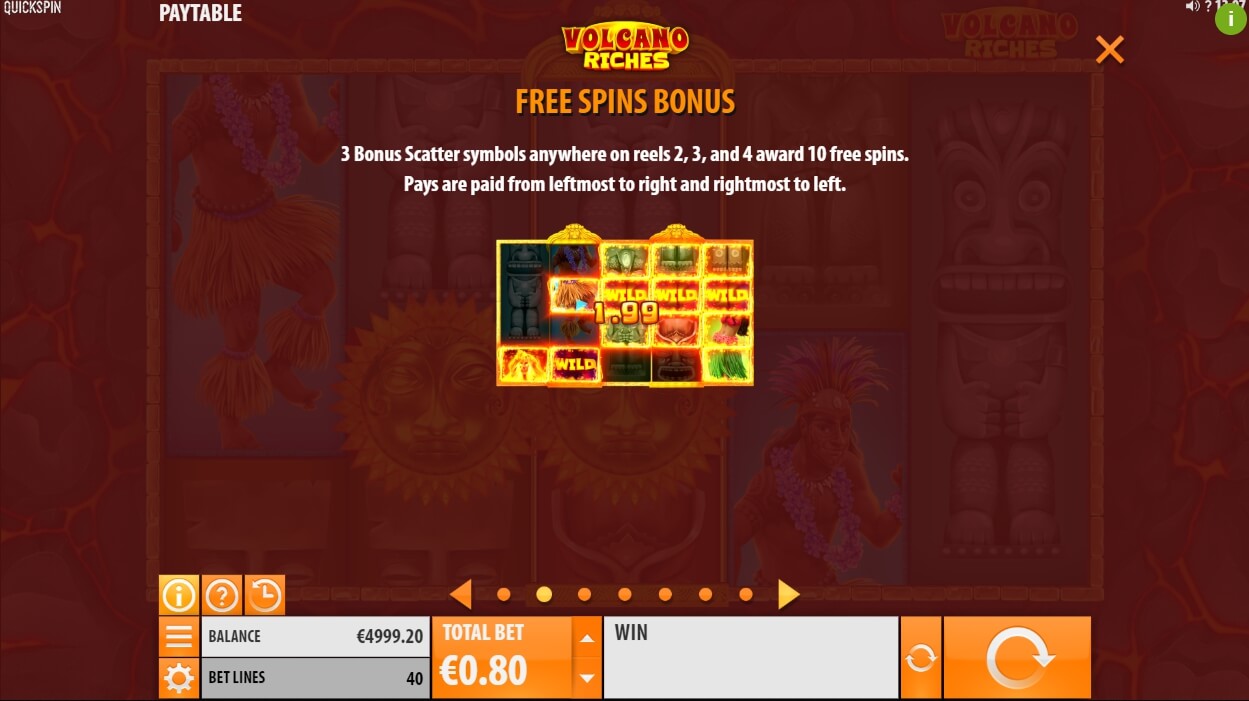 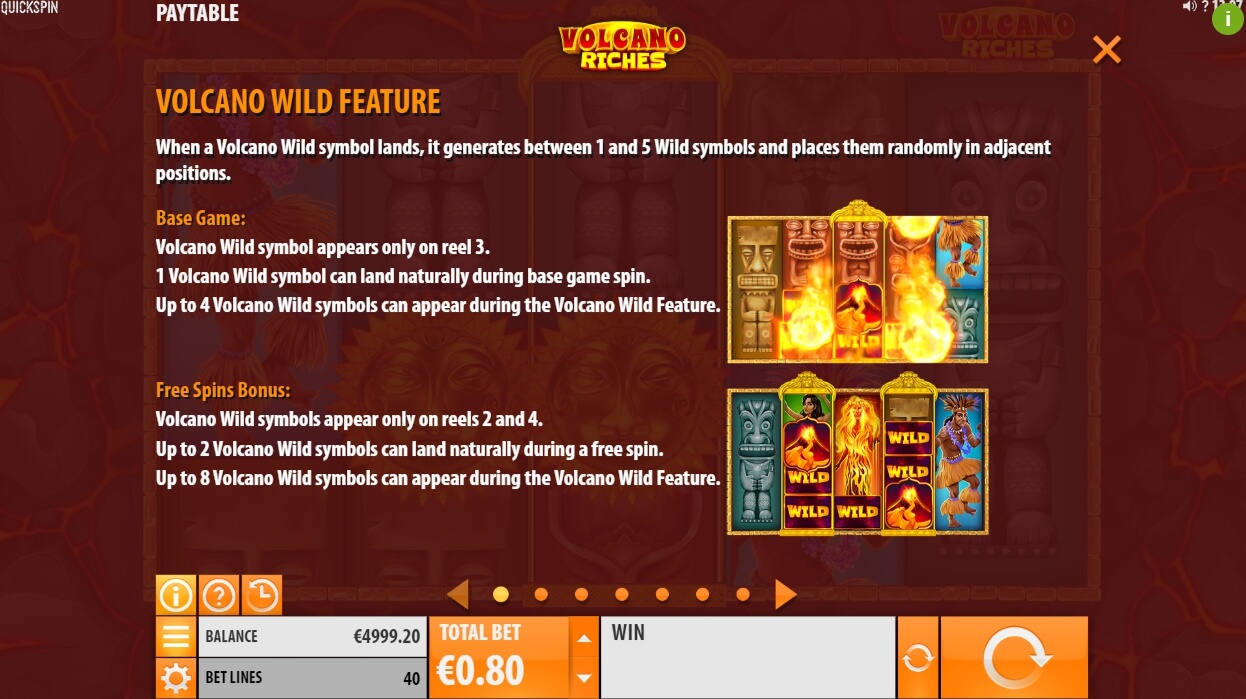 One of the largest volcanoes in the world is in Hawaii. For many centuries, local people performed different rituals and also sacrificed this “god.” An ancient legend says that once an ordinary girl wanted to compete with the gods to test their strength. Of course, she lost the battle and was thrown into the crater of the volcano. Since then, she wields this element and has incredible power. The Quickspin company provided an excellent opportunity to go to the island and meet with the powerful god of volcanoes.

Have you heard about the Pacific Ring of Fire? This is the name for a chain along the perimeter of the ocean, on which most active volcanoes are located. Local residents believe that the goddess controls all the volcanoes and magma. It is this theme that became basic for the creation of the Volcano Riches video slot. The user will receive many gifts from the leader if he or she can agree with the capricious god and save the locals.

A large volcano appears immediately on the screen, ready to erupt. This means that the village is in danger, because the hot magma will destroy life on the island. Interesting animation accompaniment will also pleasantly surprise the client. Therefore, all characters will come to life and welcome the user. By the way, all images are stylized in accordance with the main theme. The client can go on a journey after he or she learns the theoretic tab.

Here it is written that 5 reels and 40 prize lines take part in rounds. The following pages will describe all the instructions, symbols and additional functions of the emulator. The main control panel includes several buttons. TOTAL BET will help you make a bet. A round arrow key launches standard spins. Two round arrows activate the automatic game mode.

If the user only wants to see the appearance of prize chains, then he or she needs to activate the turbo mode. Custom presets were also provided in the video slot. You can enable or disable sound effects and adjust the quality of the display.

Wild (volcano) serves as a special joker that replaces standard icons during the game session. It also launches the “Volcano Wild” bonus.

The volcano erupts by adding five jokers to randomly selected cells. They help to make chains. Scatter (the golden sun) does not depend on the number of active lines. According to the tradition of slots, such elements launch an additional mini-game.

During free spins, the key figures (the bet and the number of lines) cannot be changed. During this round, chains can form in both ways. This feature increases the chances of players to win (150,000 thousand coins). The participant can activate the training mode at any time. But in this case, some options will not be available. On the other hand, you can familiarize yourself with all the features of the emulator.