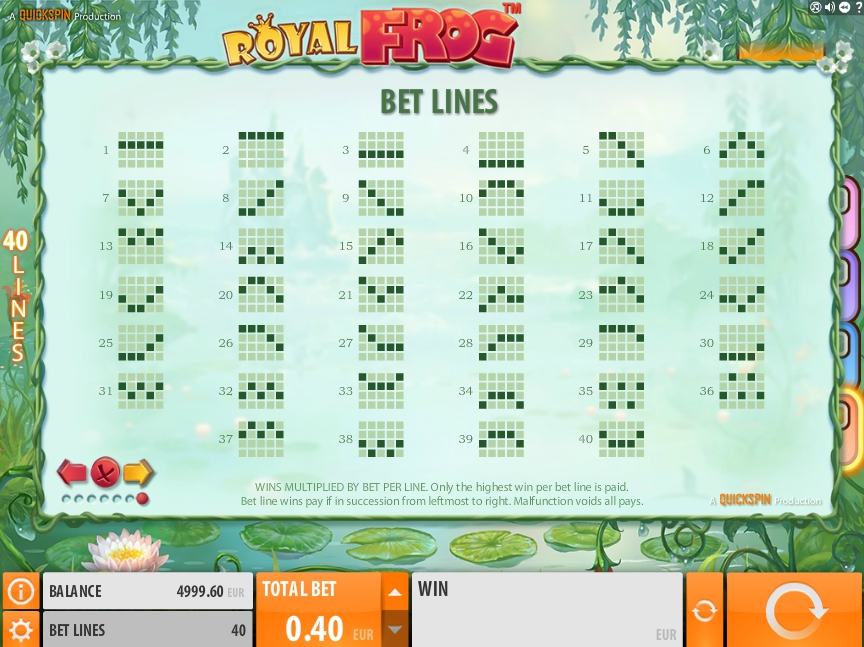 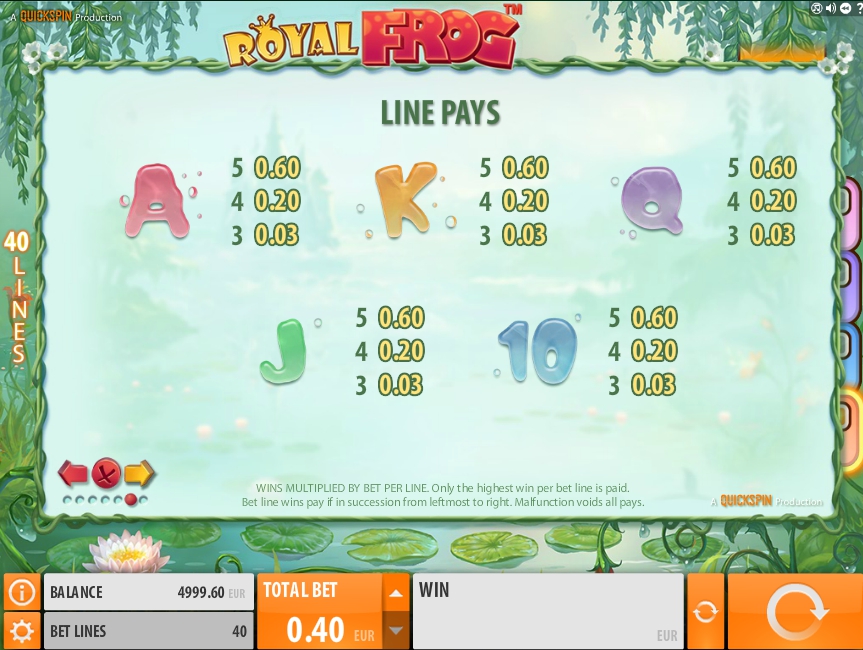 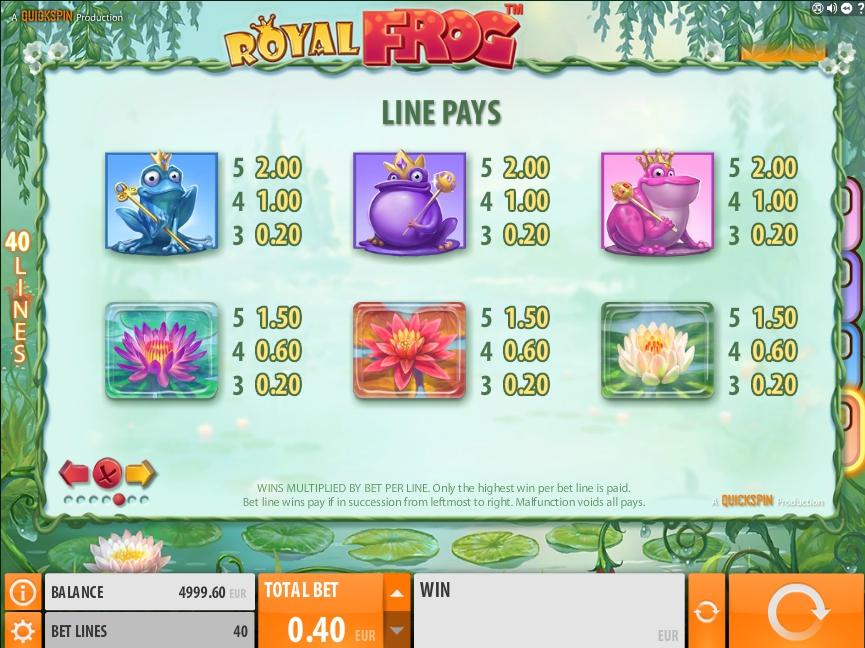 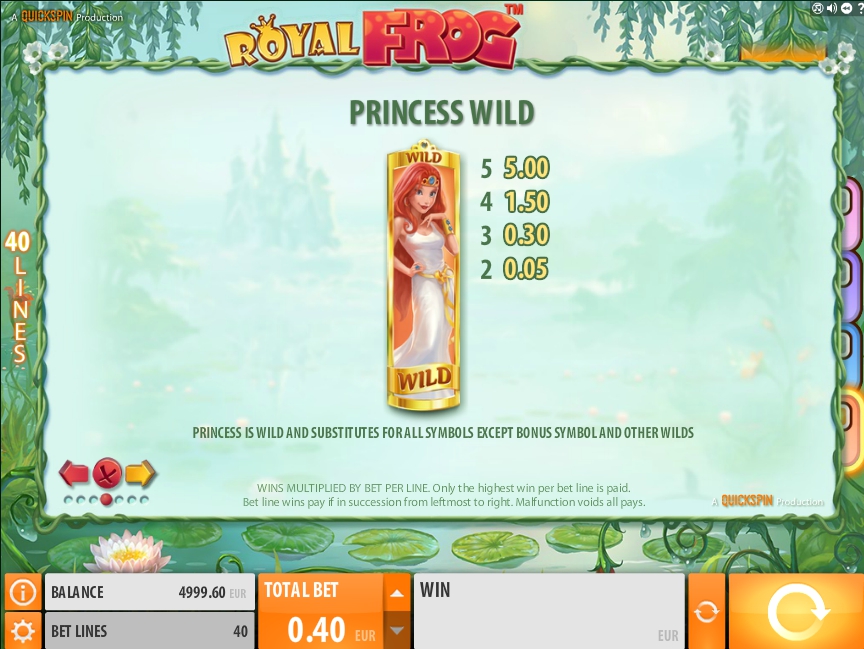 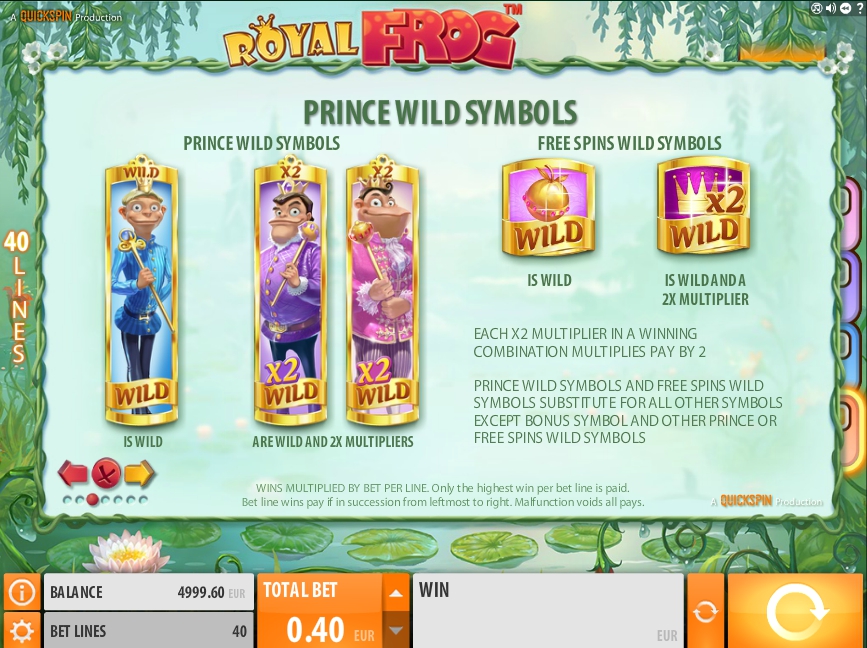 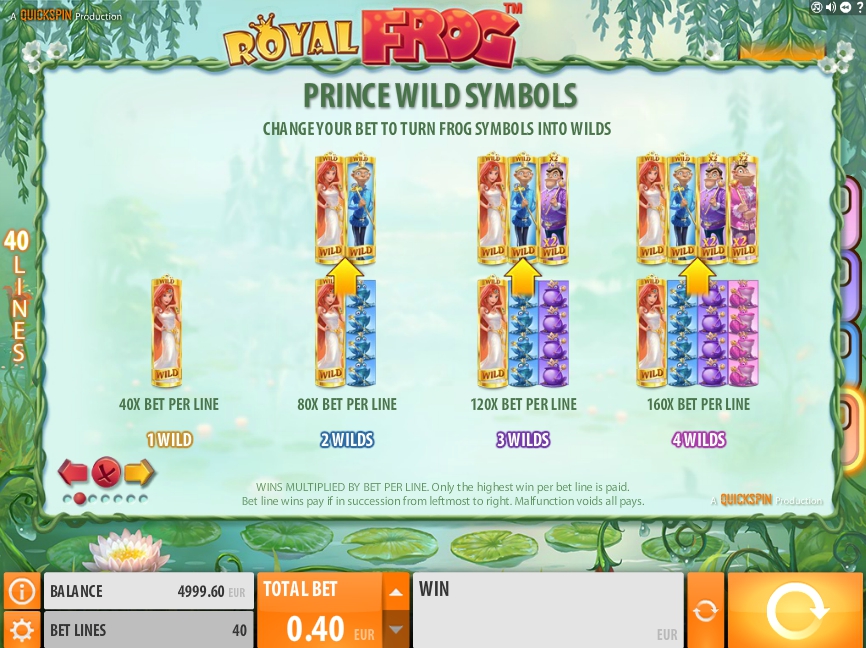 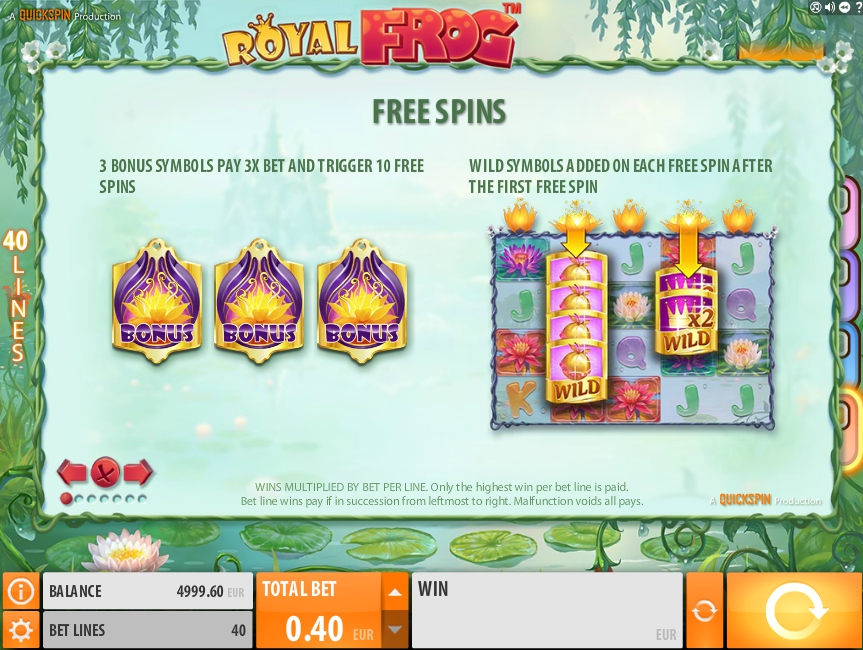 There was a king who had three sons. When his sons grew up, the king called them and asked them to marry. The king really wanted to see his grandchildren before his death. The sons asked for a royal blessing and decided to fulfill the request. Each son took a bow and went out on a green meadow shooting arrows to find a wife on this way. The arrow of the eldest son chose a nobleman’s daughter. The middle son’s arrow fell in the courtyard of a merchant, and the merchant’s daughter was his choice.

The arrow of the younger son landed in a swamp. From this moment, this old tale comes to the end and a new story, invented by the Quickspin developer, begins in the Royal Frog online slot machine, where a frog should kiss the prince to get a human look.

On the expanses of the Royal Frog slot, the gamer will be transferred to another reality. There are 5 reels on the backdrop of the swamp with water-lilies. It is time to get acquainted with the main heroes and to learn the means how to make them spin and bring real money. In order to succeed, the gamer should pass many fascinating tasks.

Before starting to look for the royal frog prizes, the gamer ought to determine the bet size choosing the Total bet key. Its size is quite extensive, ranging from 0.40 to 400 points. An important characteristic of the slot is that the system will involve all 40 pay-lines by default.

As soon as the gamer clicks on a white circular arrow in the lower right corner of the screen, his or her adventure to the kingdom of the frog will begin. If necessary, the user can speed up the process with the Fast Play key or start the non-stop torsion mode pushing Autoplay.

It’s not so easy to have payouts in this swampy Las Vegas. The rules and terms are difficult with their own differences. In the swamp, right above the water lily, there is the Paytable panel where the gamer will find out how prize lines are constructed and how much each composition costs. Elements on the reels are represented by colorful frogs, various marsh flowers, and cards. The max jackpot is equal to 500 points.

The Bonus purple flower is an additional element for launching prize-winning spins. To get them, three such elements should appear simultaneously somewhere on the screen. In this case, the gamer will receive a payout in the amount of three general bets and ten free rotations. For each new launch, the quantity of additional Wild elements will increase. In this case, they will be both ordinary and special ones with multipliers. Details are specified in the help section of the Royal Frog slot.

Online and for free

It is rather difficult to penetrate this kingdom of frogs. Therefore, the slot proposes to go all the way of turning the frog prince into a human in a demo mode without downloading the Royal Frog game to the computer. The gamer does not need to enter his or her personal data for registration in order to try out all possible variants of receiving payouts in the slot.