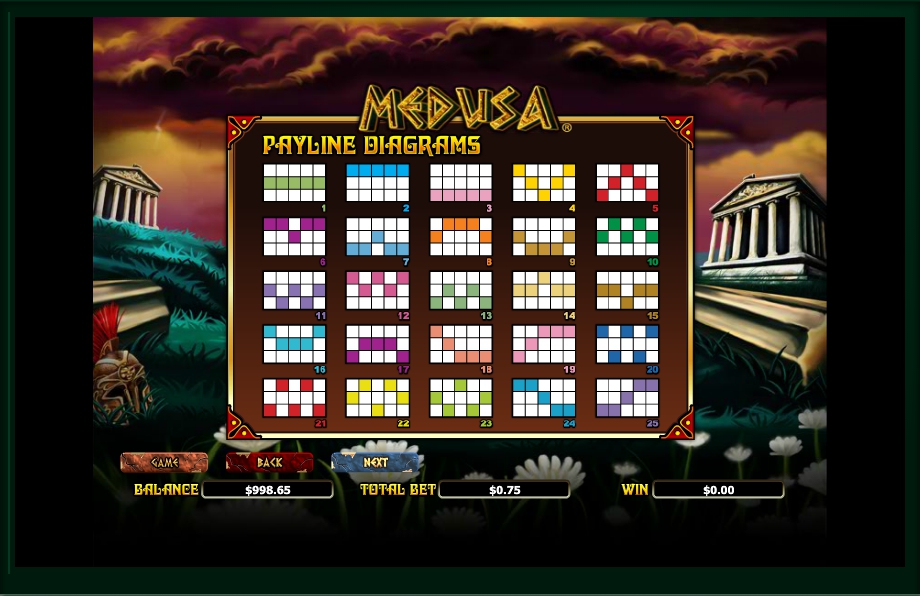 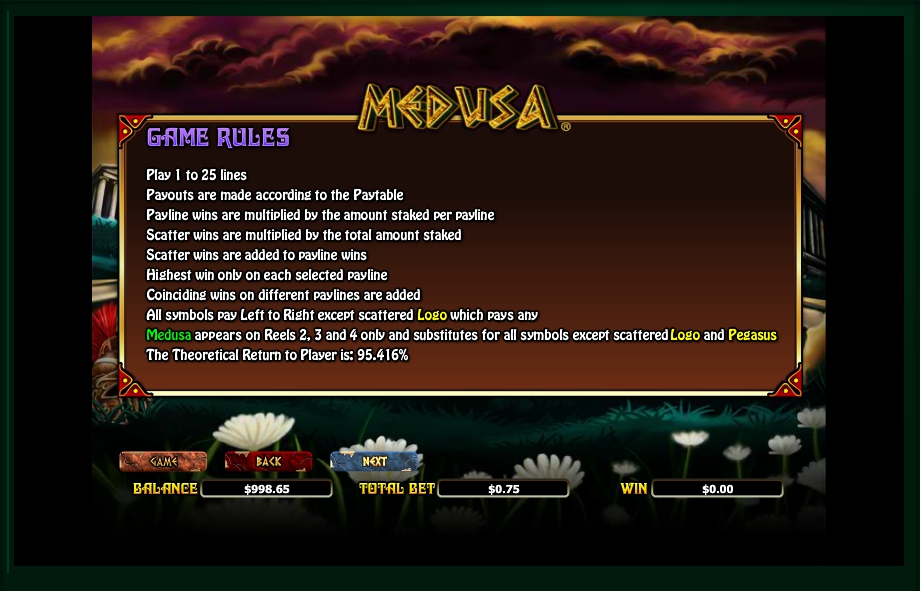 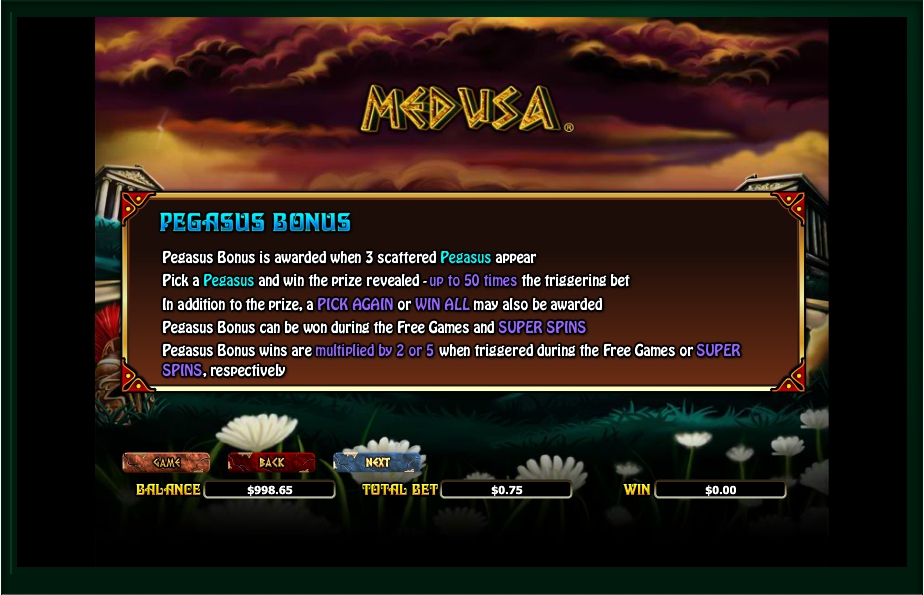 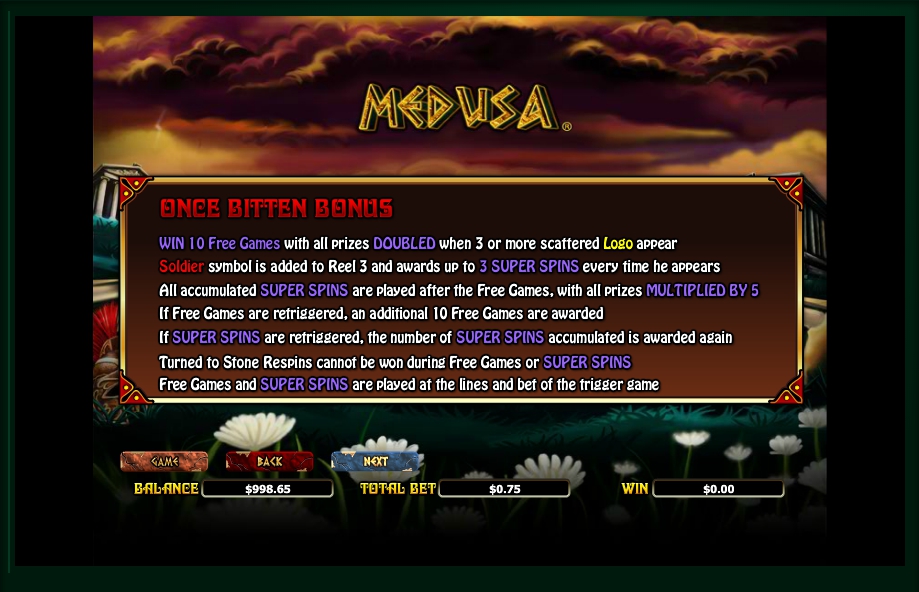 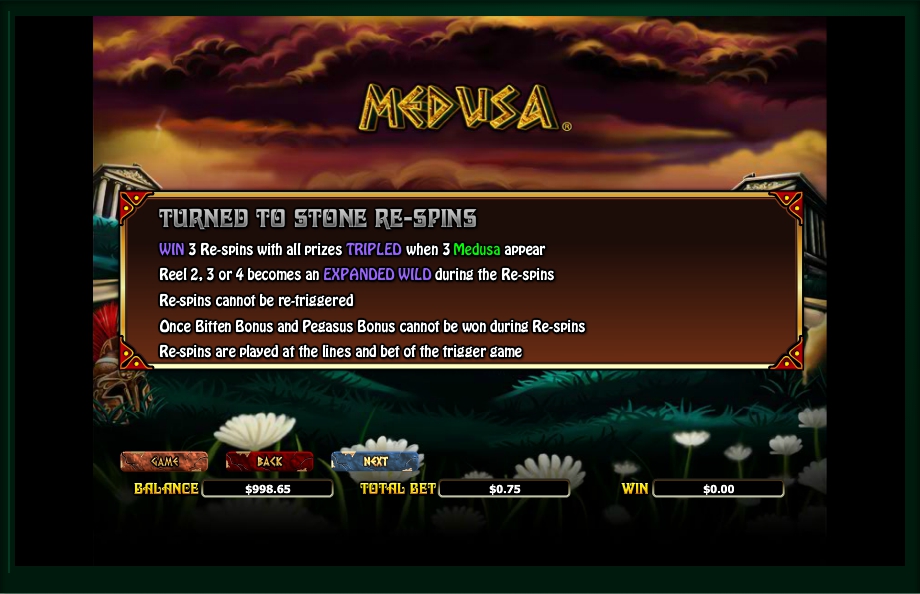 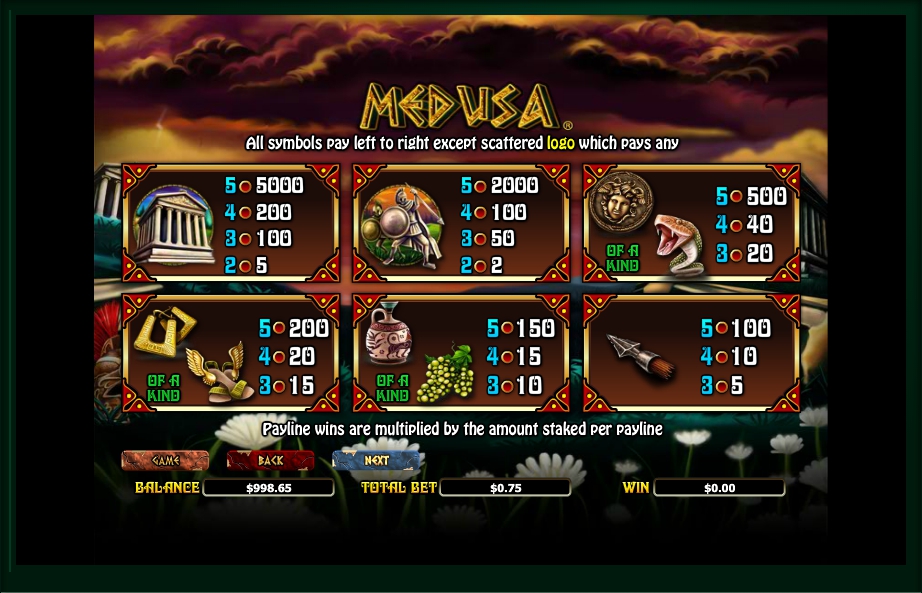 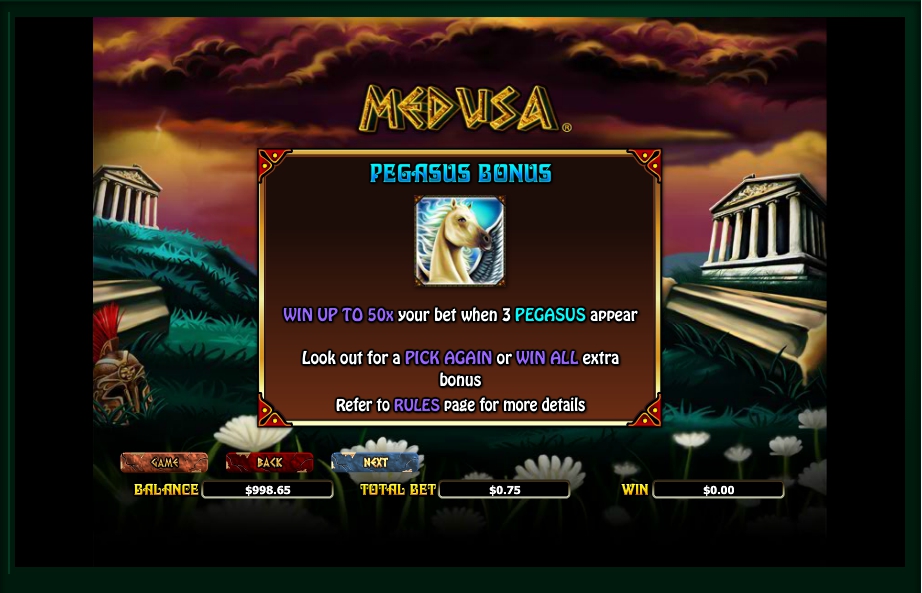 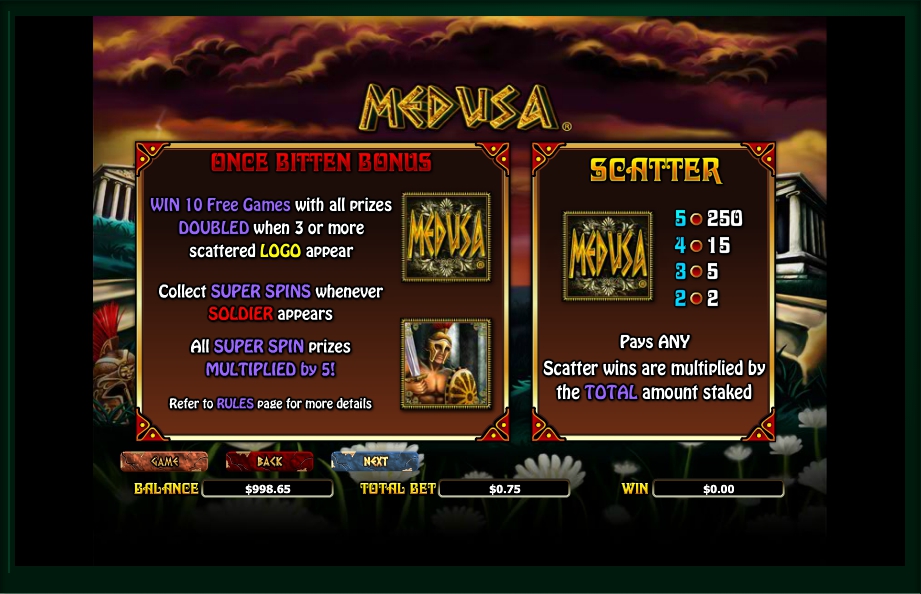 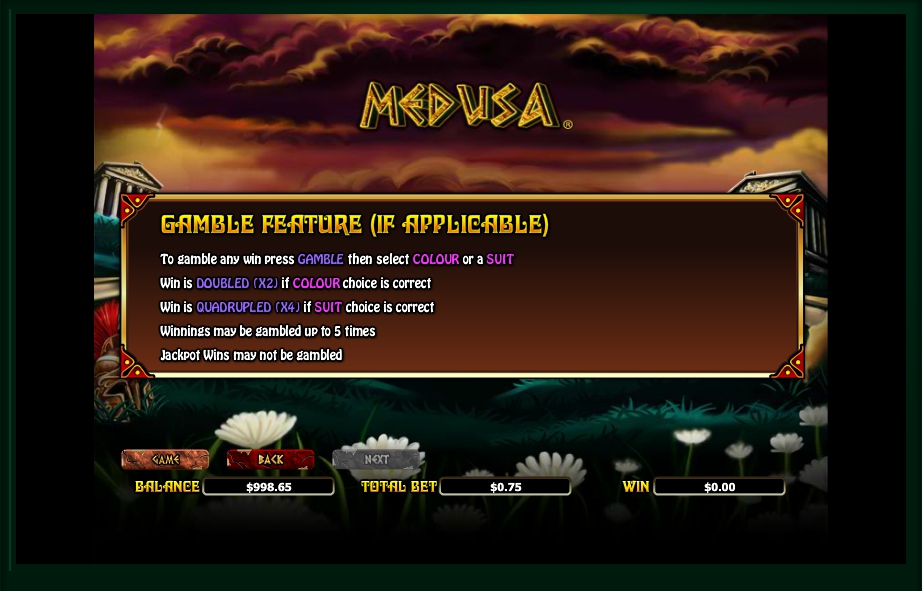 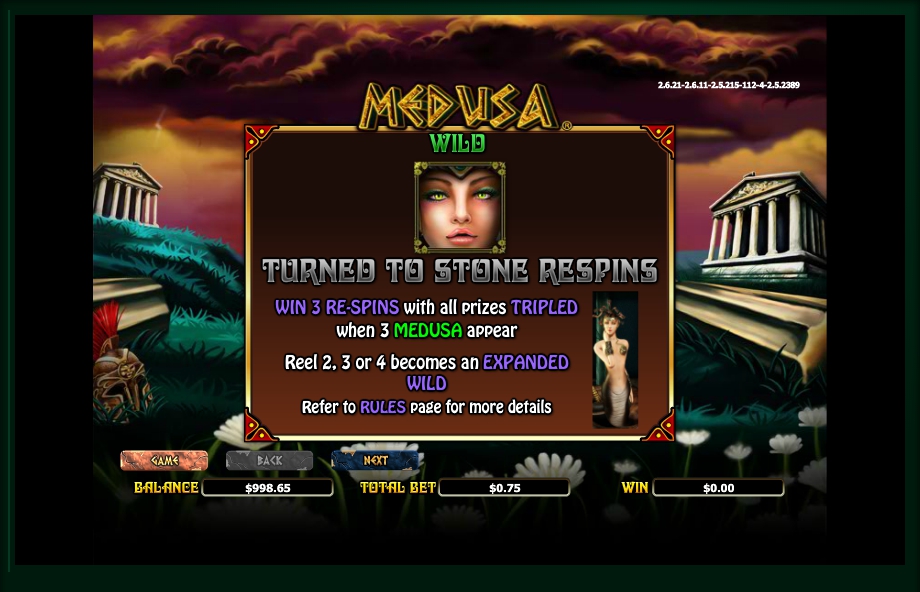 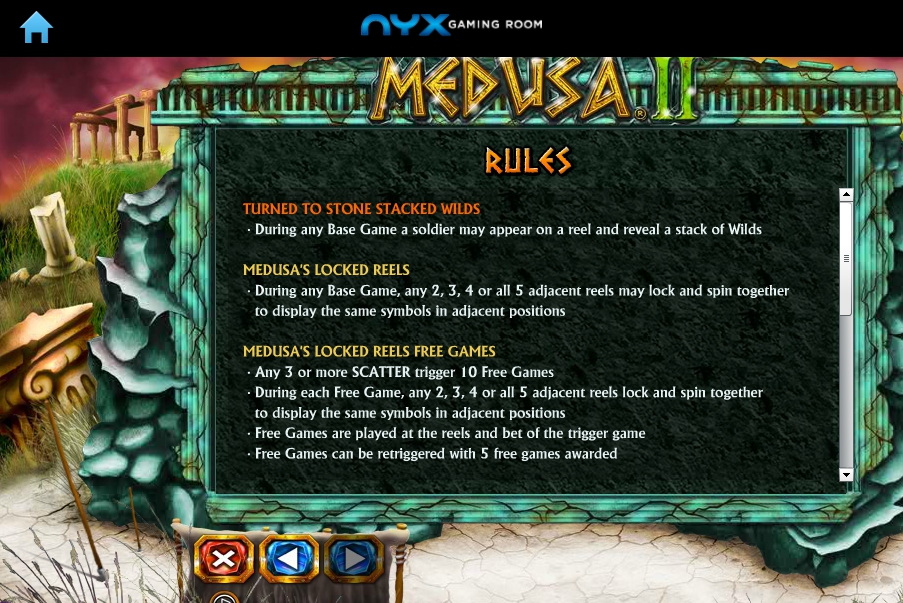 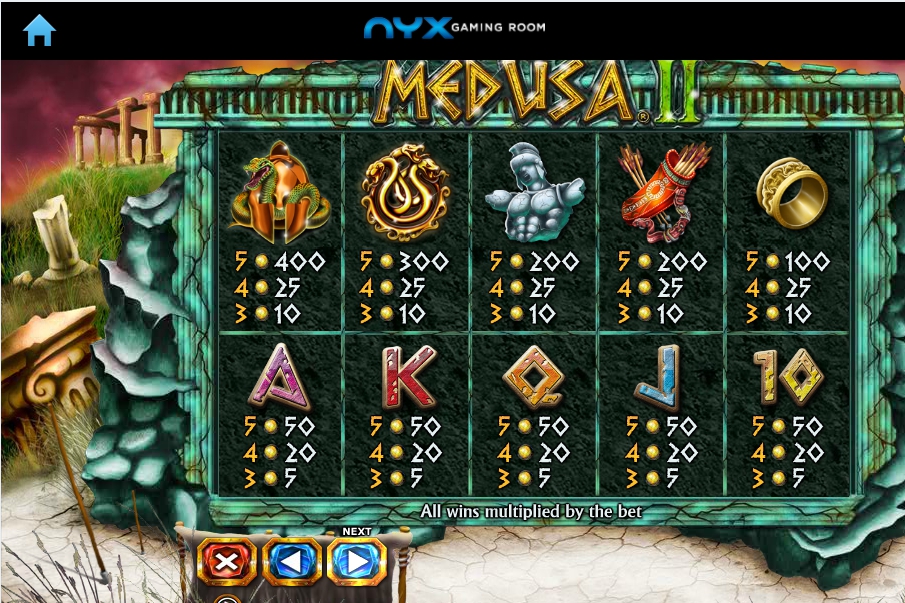 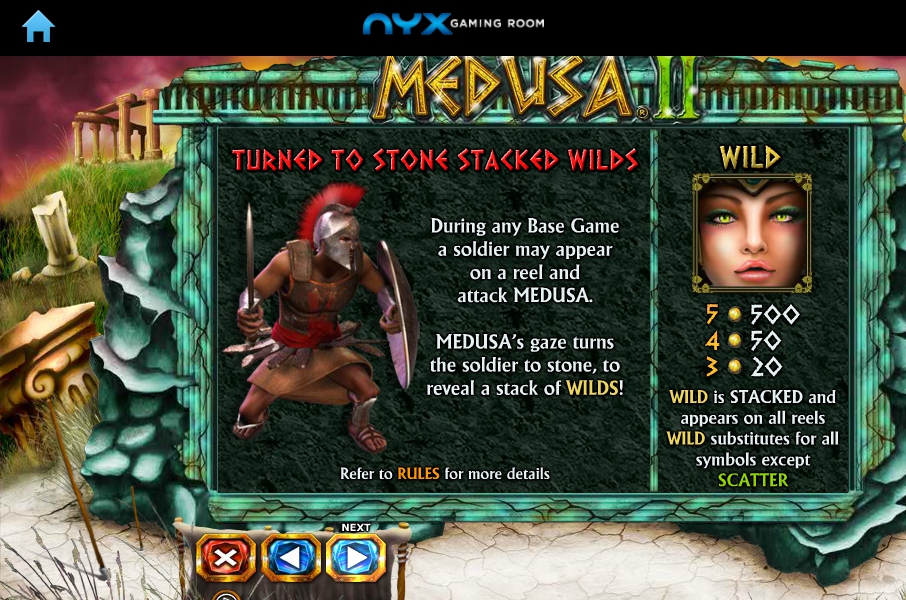 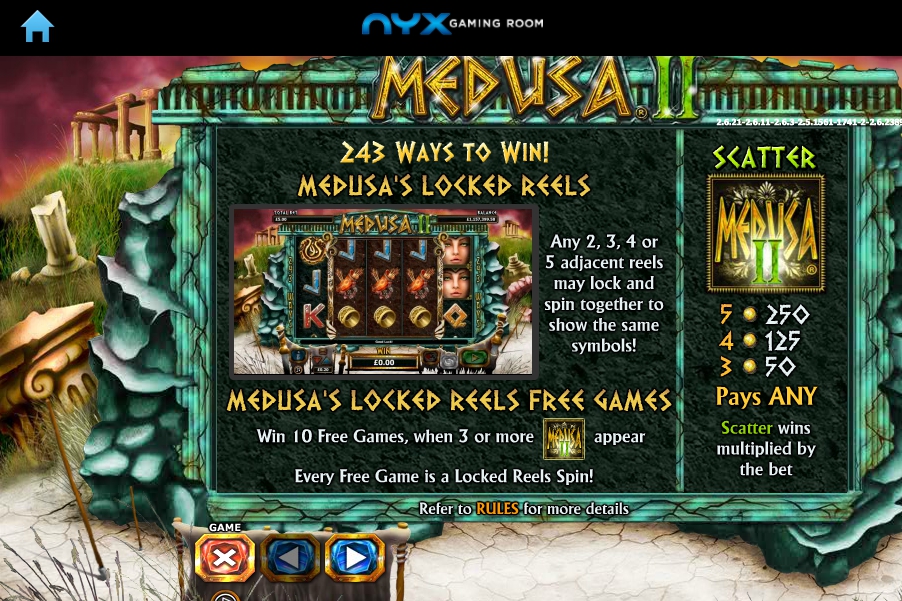 The second part of Medusa video-game from the company NexGen, beating the theme of ancient Greek legends. This wonderful online-game has become a logical continuation of the game machine Medusa, which caused an unprecedented interest among fans of mythology and online devices. The player has a number of unique pictures, several mini-games and a lot of pleasant surprises that make the game even more entertaining. We are sure that everyone had heard about a terrible woman, who turned warriors into stones. Everyone was afraid of Medusa. So, this video slot was dedicated to her.

First, this online-game meets its users with a colorful interface. In the central part of it there is a logo with the name. On the bottom, there is a control panel. Against the background, there is a fragment of the crimson sky, which is eclipsed by the ancient Roman ruins from the castles.

The destroyed city is also visible in the background, which indicates the recent rampage of the jellyfish. The drums themselves, which are five pieces, are located on a green background. Before to start playing in the game, customers should initially set some options using the control panel, which is located on the screen`s bottom.

To start the rotation, click on the Spin button. If you want to play in automatic mode, click the button with the image of the circular arrows, and then a list with the number of automatic spins will open.

To view detailed information, just click on the image from the Latin letter i, after which a window with game rules will open.

But the excitement does not end there, the best of this game is the collection of special features it has, and different to similar slots, they are constantly activated. These features are:

– Medusa’s locked reels: Randomly activated and it begins when several reels are covered elegantly, with an animation of Medusa walking between water. These reels spins and when they stop showing the same symbols in each of the 3 horizontal lines, to maximize the chance to complete one or more winning lines.

– Medusa’s locked reels free games: with the emergence of 3 or more scatters, represented by the logo of the game, a round of 10 free spins is triggered, and every spin will present the above-mentioned feature. This feature can be re-triggered granting additional 5 spins each time.

– Turned to Stone stacked wilds: randomly during the base game, a soldier may appear and attack Medusa with a sword and she defends herself turning him on the stone statue and then depositing stacked wilds on some reels.

– Gambling: there is also the chance to double or quadruple the gains with this feature, for those who like it. The main jackpot, which everyone can get – 500 coins.