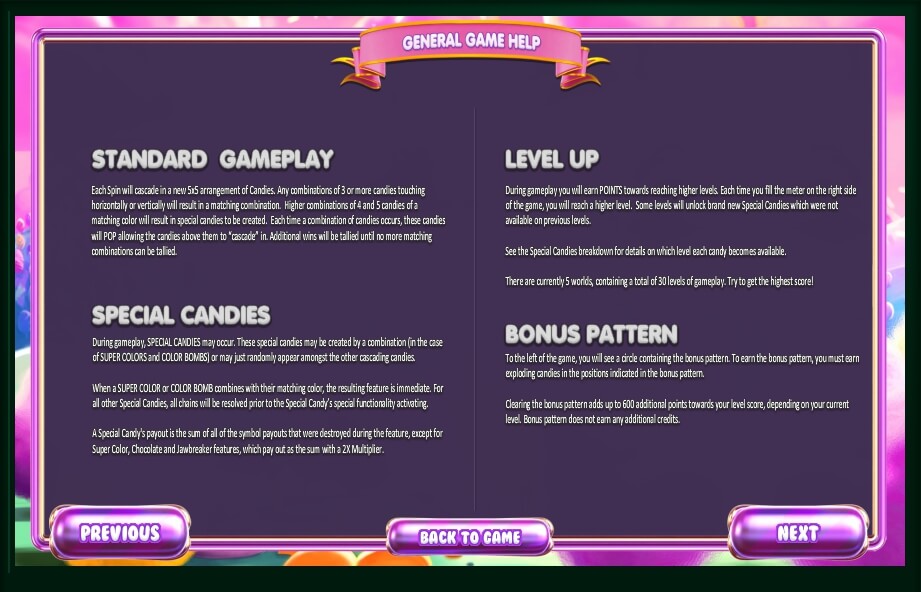 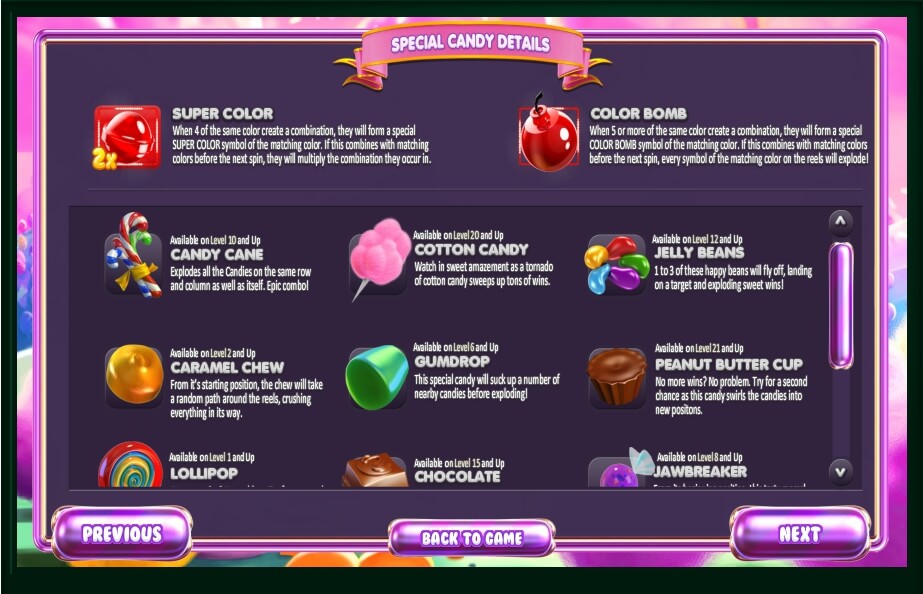 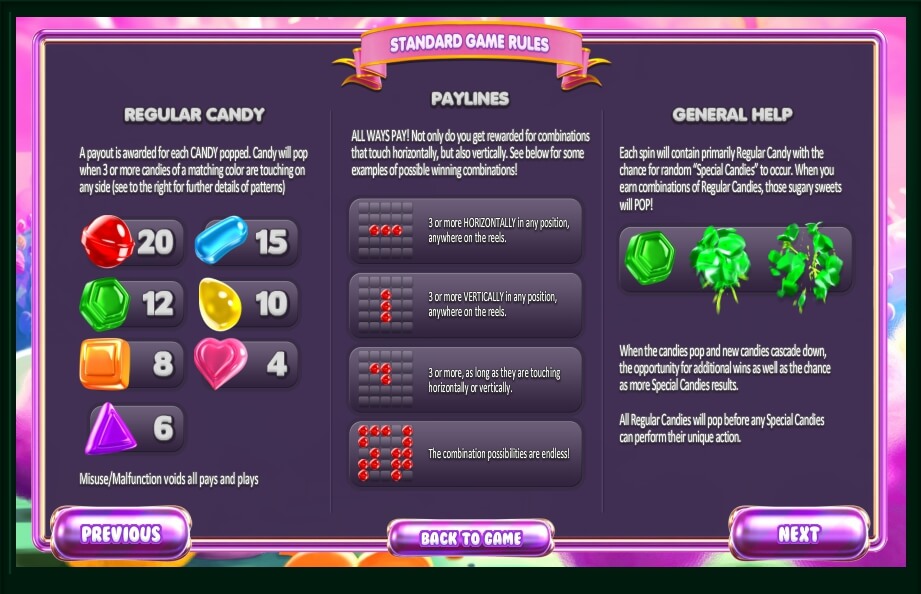 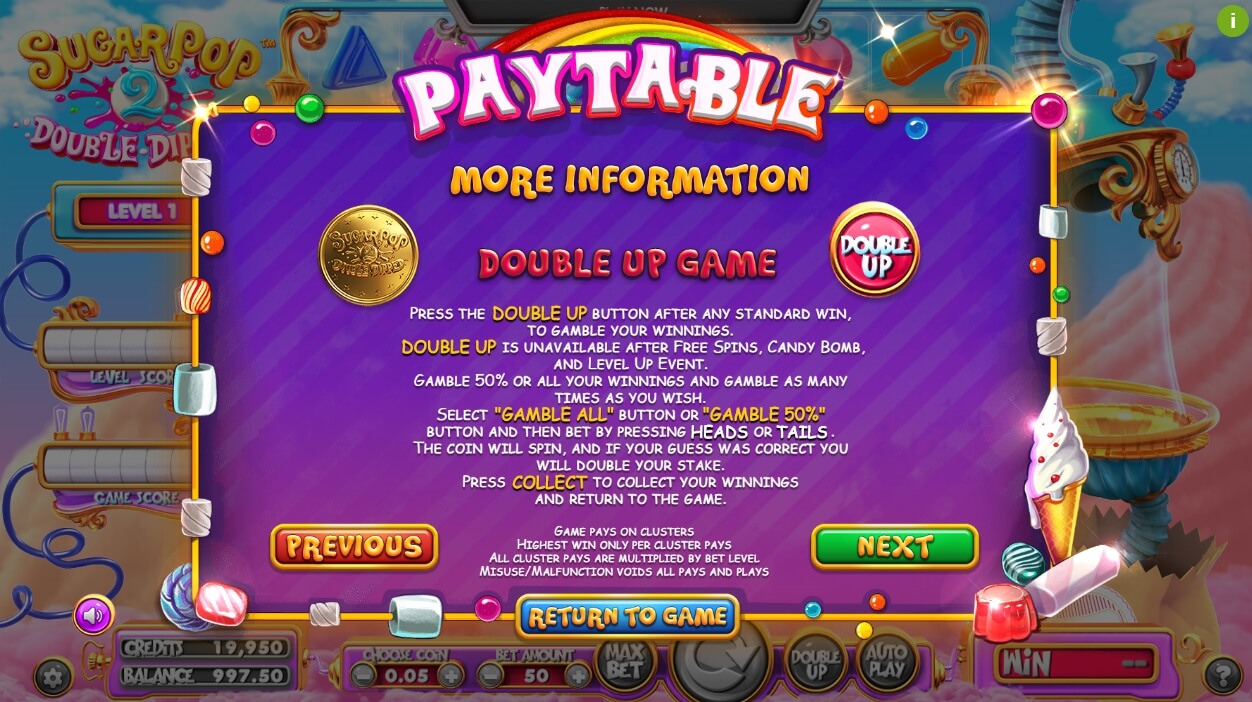 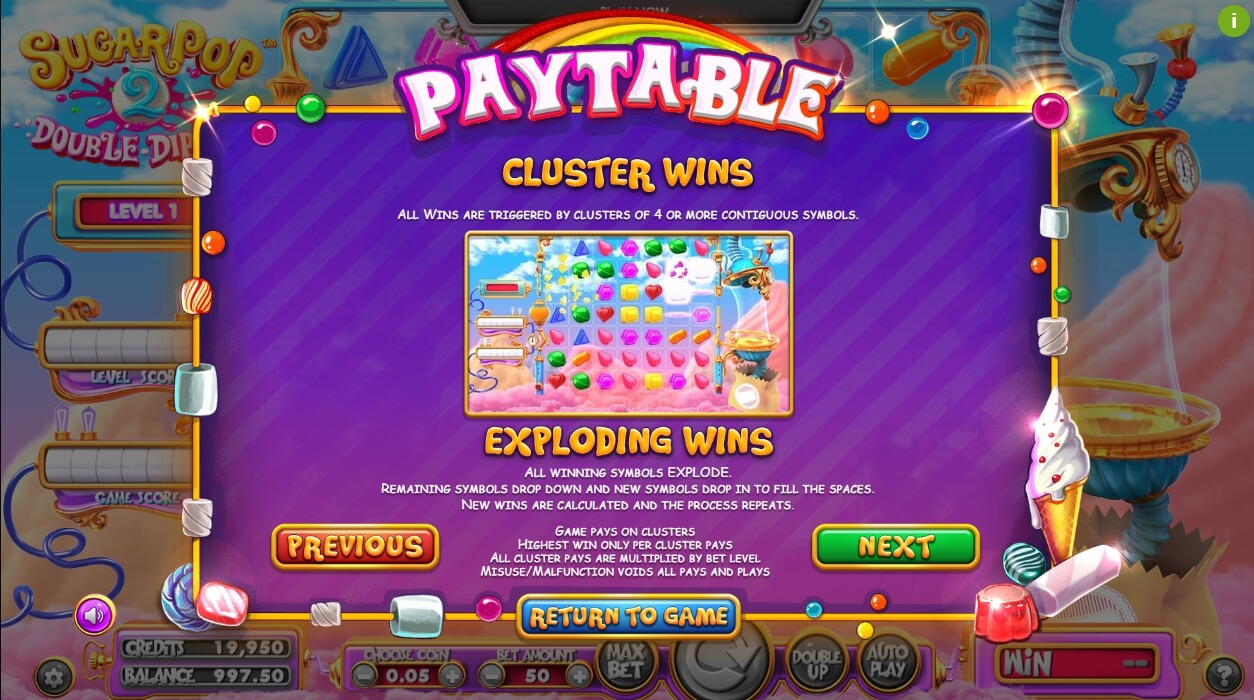 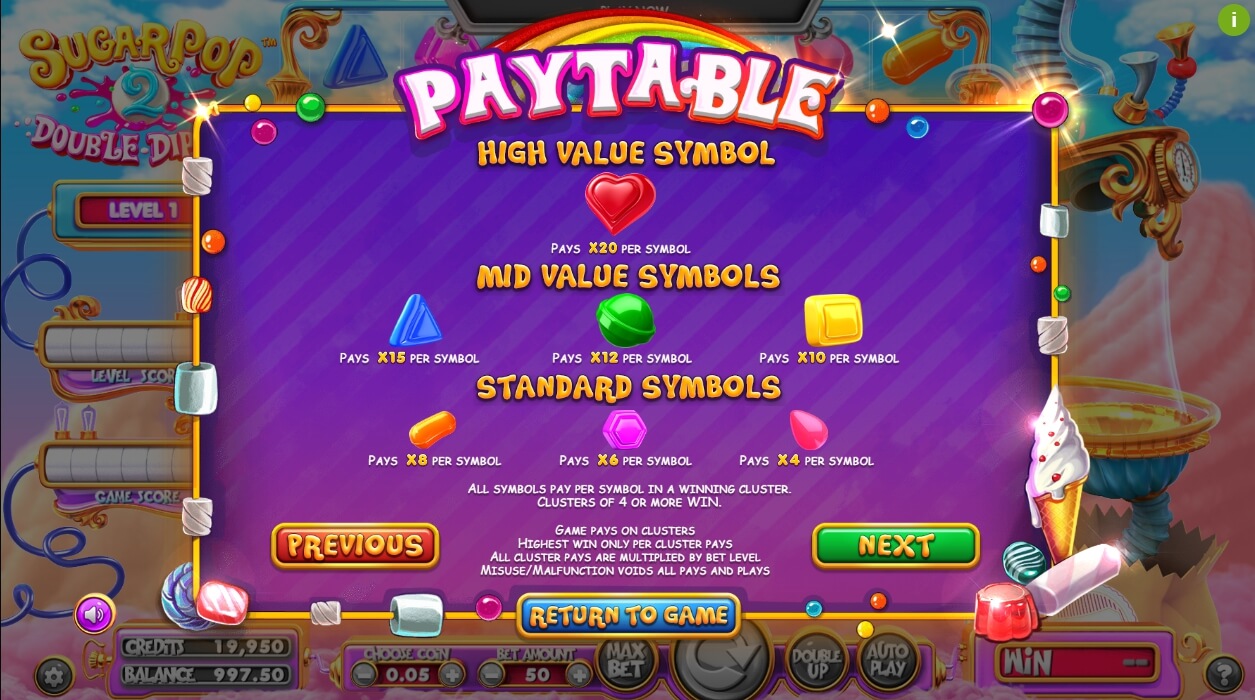 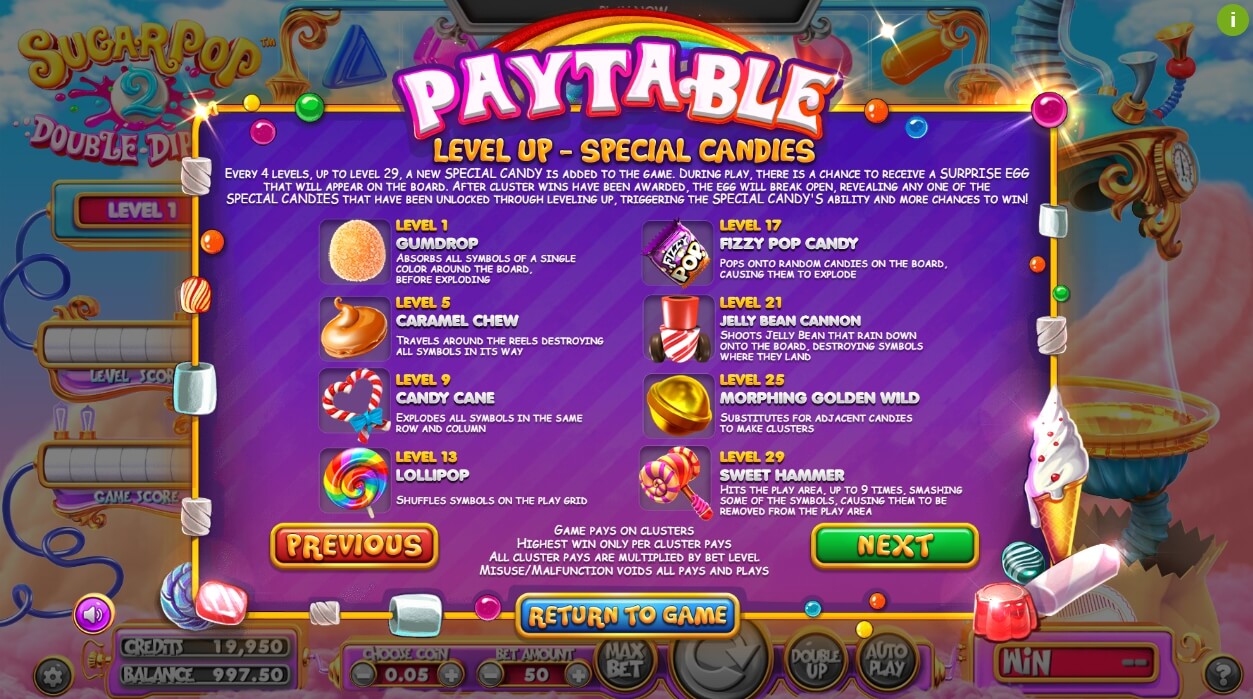 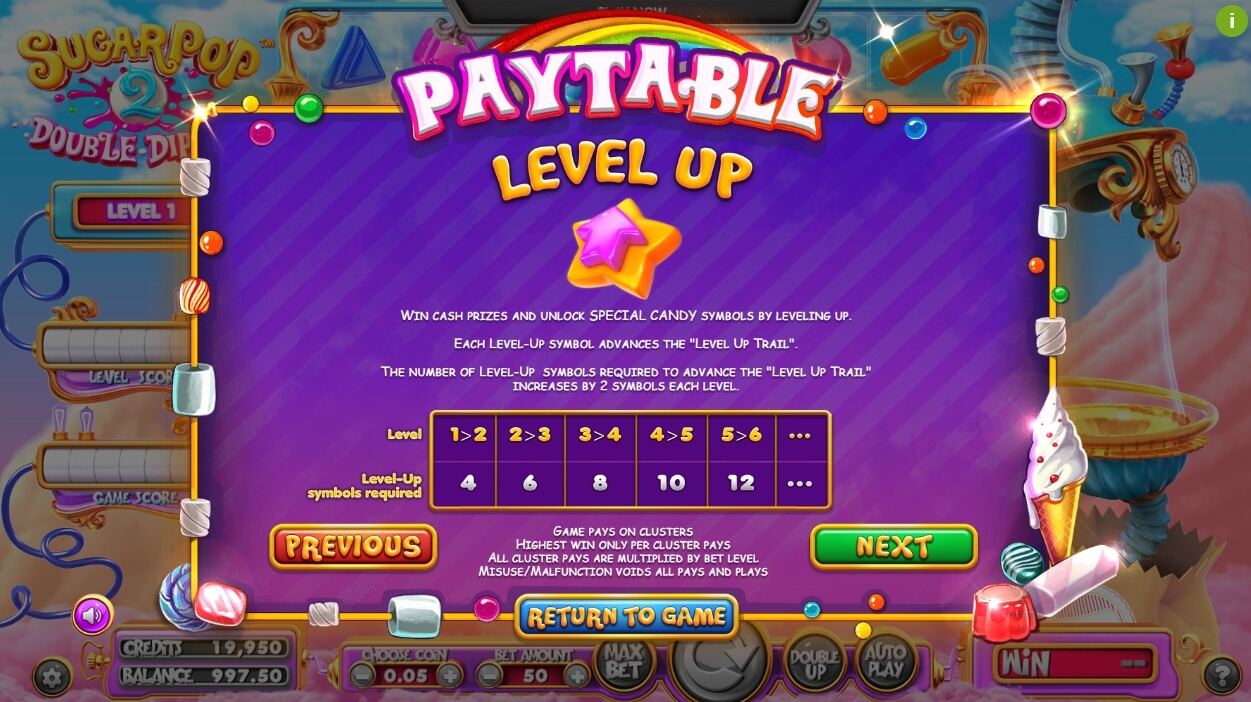 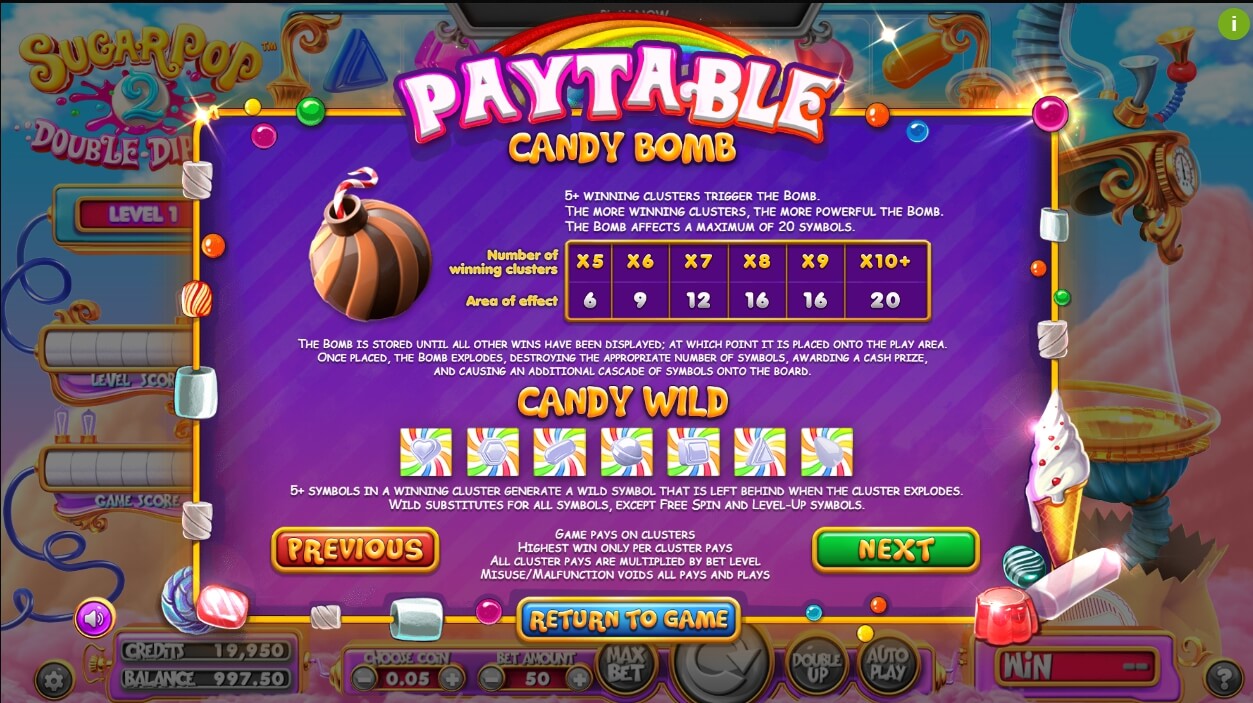 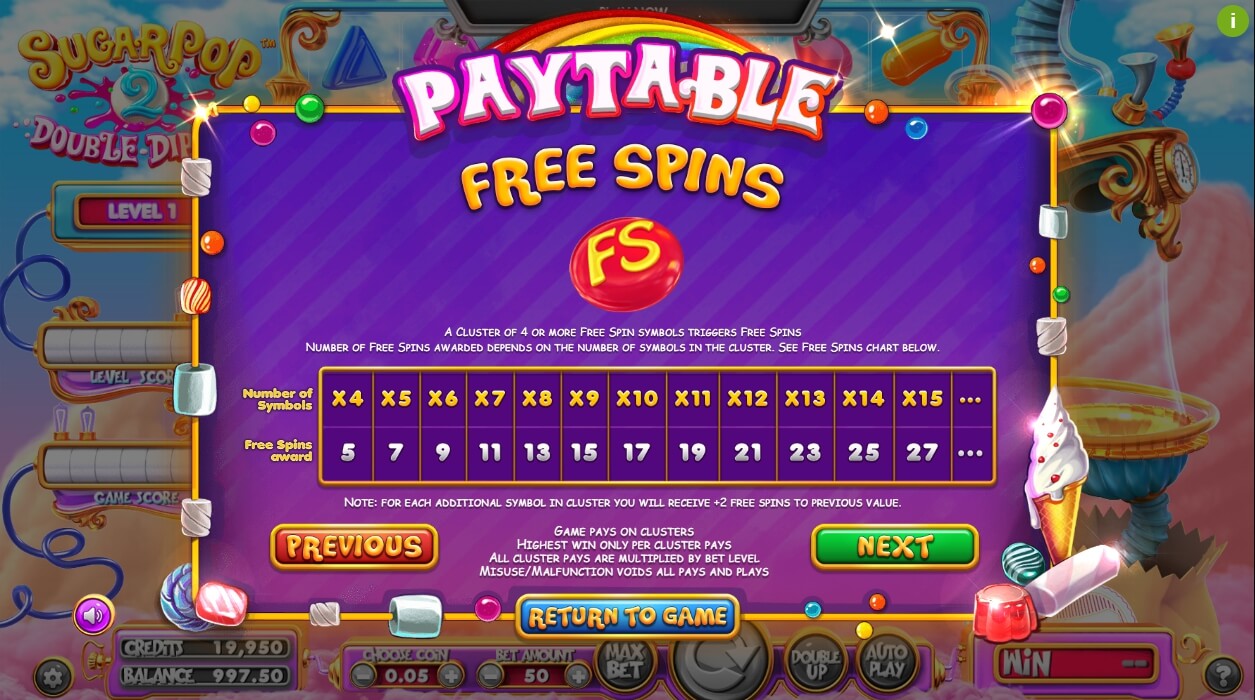 A few years ago, one of the leading corporations, Betsoft, released a terrific game that later became the leader and one of the most successful games in the company’s portfolio. It’s about “Sugar Pop” that has found many fans around the world. This success of the video slot inspired the development team to create the second part of the “sweet” interconnects. If you did not play the first part, then we will remind you the story. Sugar Pop is a fairy world that consists of sweets and desserts.

Of course, such a plot was doomed to success. Today we will consider SugarPop 2: Double Dipped that offers more advanced features and features. The representatives of the company said that this slot machine has no analogues so it is unique!

After the game is loaded, a test mode will be activated that allows you to familiarize yourself with the story and characteristics of the gaming machine. But if the client wants to use all the possibilities of the game then he/she must make real money in his/her account. The design of the slot contains many bright colors that characterize the fairy-tale world. All the actions of the game occur on pink clouds.

On the left in the main panel you can see the current information on the game: winning, score and level of play. A distinctive feature of this slot is the ability during the game to move to the higher level that will be characterized by more opportunities for victories. On the right side, we can see a glass flask with a yellow bulb.

You will go to the next level after it is completely filled. The playing field is constructed according to the 7×7 structure. Recall that the previous game has the 5×5 structure. This time, the developers offer more chances to win. Using the “Bet Amount” button, the player needs to make the bet that affects the win.

A large green button triggers brisk spinning. The AutoPlay key activates the corresponding mode. Additional settings include the sound and size of the screen. Bright graphics and dynamic gameplay will rise the time for each customer.

After the chain appears on the screen all the pictures that take part in it and in their place there will be new candies. After you have credited the payment, you can click on the Double Up button. It will offer to increase the payment twice in the risk round. The gold coin will appear in the new window. The mini-game acts on the principle of “head or tails”. Having made a right choice, the user will increase the payment twice.

Three “FS” pictures open access to the round with free spins. You can get up to 27 spins during which the bet will make casino website. Here also operates the wild symbol that replaces the usual pictures with no special functions. A bomb can also blow up a few pictures that would make room for new sweets.