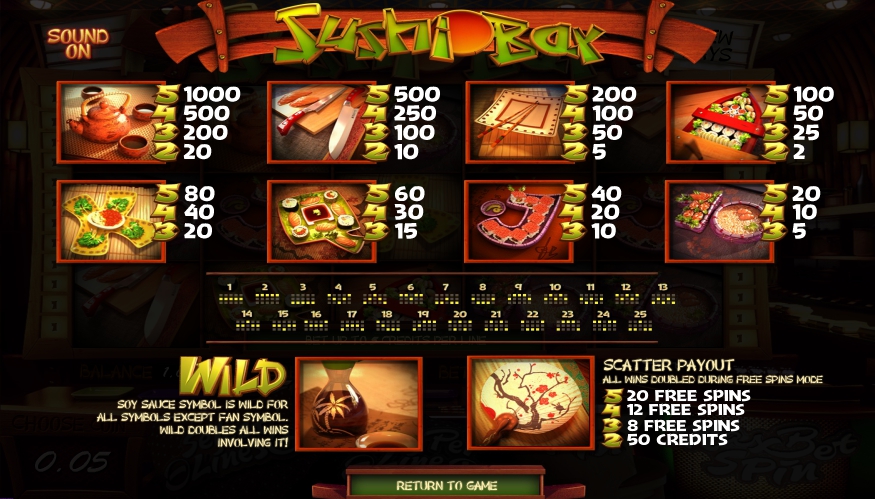 The history of the invention of this popular dish is more than a thousand years old. Initially, sushi was a sort of an analogue of a refrigerator. In ancient times, it was not so easy to keep the food fresh, because no one had refrigerators or freezers. By chance, people discovered that thanks to the natural fermentation process of rice, the fish immersed in it stayed fresh longer. For a Western man, the dish was a novelty and a long time passed before Europeans and Americans took sushi and learned how to enjoy them.

A detailed story about sushi and the history of their origin was decided to be told by the developers of the game slot called Sushi Bar from the company BetSoft. You will plunge into the variety of delicious rolls, and also everyone can earn on it worthy money!

All the actions of the game take place in one of the trendy bars where not only sushi lovers, but also the elite are going to eat. Serving the party and accompany throughout the time will be the chef, who will tell gamers about all the features and subtleties of the game. In addition, the same character gives the machine a necessary color, which is needed for an interesting game. Bright thematic details, well-chosen music will adjust the user for a productive working atmosphere.

The main thing is to determine the optimal rate and deliberately rotate the drums. By the way, before you start, the user should make sure to familiarize with each button located on the control panel. First, you need to consider the section VIEW PAYS, which contains information about the rules of the game and the variety of combinations, present in it. After that, the client can start setting the rates.

This can be carried out by pressing the buttons BET PER LINE and MAX BET SPIN. The first function allows the player to gradually increase or decrease the bet size, while the second one makes the bet as high as possible. In addition, if necessary, the participant can select the number of active rows, using the SELECT LINES function.

The largest number of lines involved cannot exceed 25. Do not get carried away by reducing the numbers and rates, because only with large indicators players are much more likely to get a decent prize!

As for the starting the reels, they rotate here only with the SPIN button.
Features and Bonuses

The slot does not have too many features, only a „Wild“ symbol that doubles the amount of the combination containing it and the „Scatter“ symbols which if making it two, they offer a win equivalent to double total bet, and if making it 3 or more, they trigger the „Free spins“ (8, 12 or 20).

Another nice aspect is that the „Free Spins“ round is held on a different screen found on the upper floor of the bar. A ladder is lowered down from the upper floor, and the animated character, represented by the Japanese Chef, leaves his place to climb upstairs and play at the second playing field.