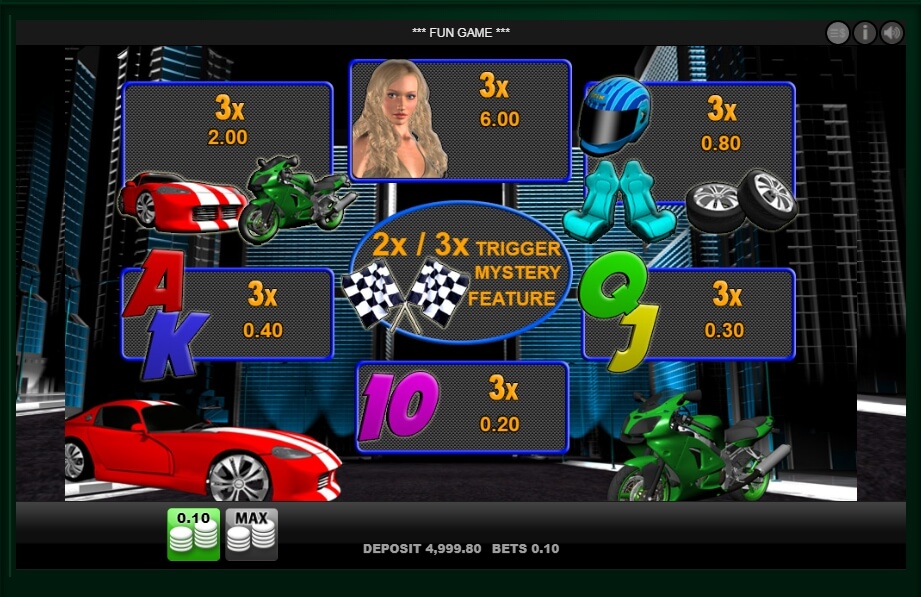 There are a lot of people in the world who like to ride a motorcycle on the highway at night. This type of transport is often used for extreme driving in the city and beyond. For such riders, the developers of the corporation Merkur created a stunning slot machine that will present excitement, risk and adrenaline. Who craves for speed and does not frighten the rainy or sunny weather, he/she can take part in the dangerous race during which valuable prizes are played. Incredible feelings of excitement, extreme and satisfaction are waiting for every visitor.

To convey their idea, the designers have developed an amazing design for the slot machine. Having launched the game, the user will plunge into the life of the night metropolis. This is the right time for a dangerous race during which anything can happen. In addition, all symbols emphasize the main theme of the video slot. Against the background of 5 reels there are skyscrapers as well as street lights that illuminate the path to victory.

The first thing that should be done by the user is to familiarize with the principles of the game, and also to examine the control panel. To implement the first action, the participant has to open the PAYTABLE section that is activated by the “i” button. Here is a special table of payments that is used to calculate the amount of winnings. Also, this tab describes the basic rules of the game.

But if the player wants to learn how to play the game correctly on this slot, he/she needs to activate the help tab by using the “?” button. Then the participant should determine the desired rate, using the BET function (0.05 to 100 credits). Also, the participant can use the maximum bet by pressing the MAX key.

By the way, 27 paylines are activated by default. After determining all the indicators for the game, the user can start winning real money as well as valuable prizes. To perform normal spinning, you need to apply the SPIN button, but if the player needs to play the game in the automatic mode, the AUTOPLAY button will come to the rescue.

During each race, a lot of capital is played out, so users will have many chances to come to the finish line first. After the combination of identical pictures appears on the screen, additional icons will appear on the right side. The picture of playing cards suggests taking part in the risky round during which the user must correctly specify the color of the closed card. If you do it correctly, the double payment will be credited to the balance.

Also, the user can try to reach the top of the money ladder that has many payout sections. To go to the next level, the player needs to specify higher payouts. If the user makes a mistake, then his/her winnings will be canceled.