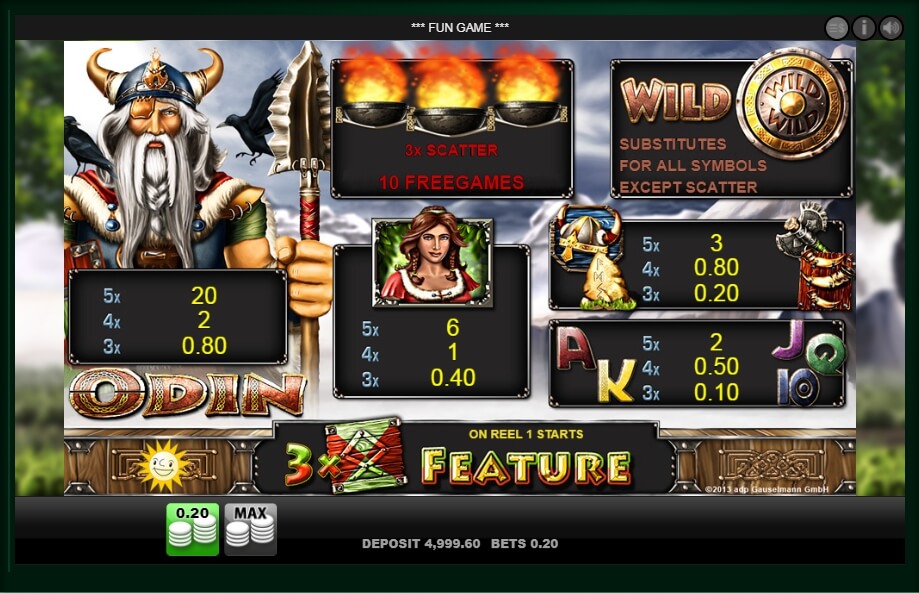 The theme of gods is very often used in films, books and virtual models. In the world of Scandinavian legends, gods and people are ruled by the gray-haired One. In ancient traditions, he is also called Wotan. The gray-haired old man with a long beard led and patronized brave warriors. In the Odin slot, each user can compete with this powerful god. Of course, it will not be easy. The Merkur company has been releasing games for a long time, so it has a large audience of fans waiting for new models. This time, the developers surprised with the amazing video slot that has many advantages among analogues.

The theme of the slot machine is interesting and fascinating. The player is given an opportunity to get into the distant times of the Vikings where he or she can take all the treasures. The plot of this online game is dedicated to the main deity of Scandinavian mythology. Of course, the player will need to overcome many tests in order to get the main prize (1 million credits).

Almost the entire screen of the video slot is occupied by the playing field that includes 5 reels and 20 active lines. To convey the atmosphere of the game, the developers used different graphic and sound effects, so you can easily immerse yourself in the atmosphere of the game. On the screen, the participant can see different characters and their attributes. On the background, there is a beautiful location in the form of a forest.

It is very easy to manage the slot machine. At the bottom of the screen is a set of buttons. First, you need to go to the info section. In this informative section, there is a lot of information about the slot game as well as its rules and features. In addition, the player can find the paytable and examine all the existing combinations of the slot. After that, you need to choose a desired number of credits.

In the lower left corner, there is a button that will display from 0.20 to 100 credits per round. The reels are started with the SPIN key. A button with round arrows can activate up to 100 rotations that are performed without user intervention. Sound effects can also be turned off.

Wild is a joker replacing standard pictures in chains. Scatter (boilers) can activate a round of free spins if three such images appear on the screen. The user will receive here up to 10 bonus prizes that can be renewed. Planks (wooden shields) appear in columns with long chains and turn into identical symbols. Pictures are randomly selected.

If three wooden boards fill the first column, they and all jokers on the screen “stick”. Then two free spins start. Of course, the developers did not stop at these bonus options, so they added two options for the risk game. You can try to guess the color of the inverted card and double the last payout. Also, the player can try to use the ladder and get generous payouts.