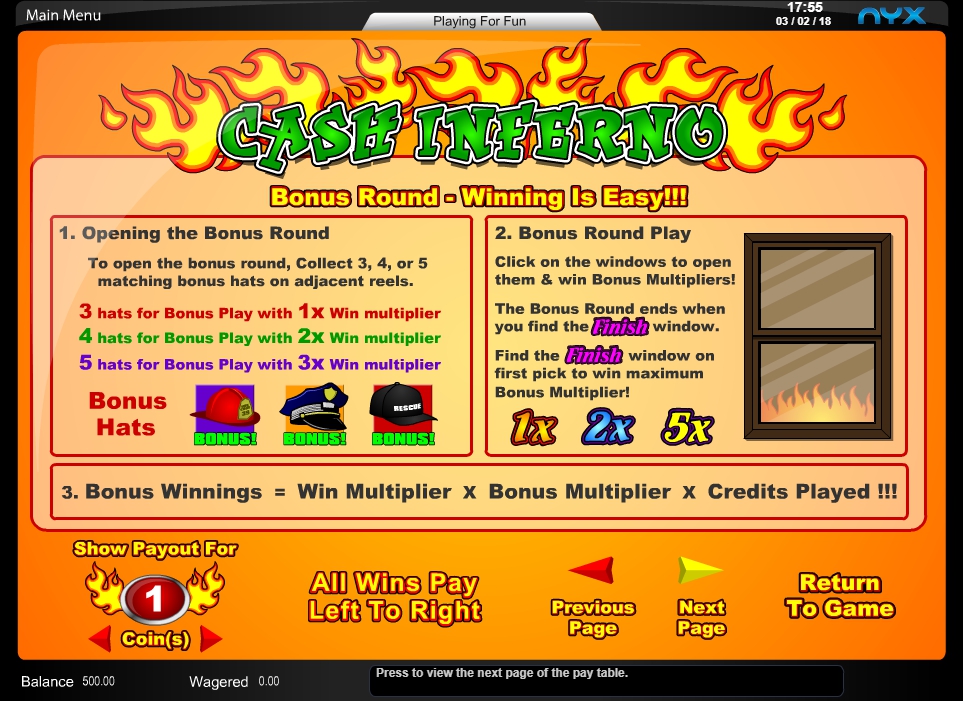 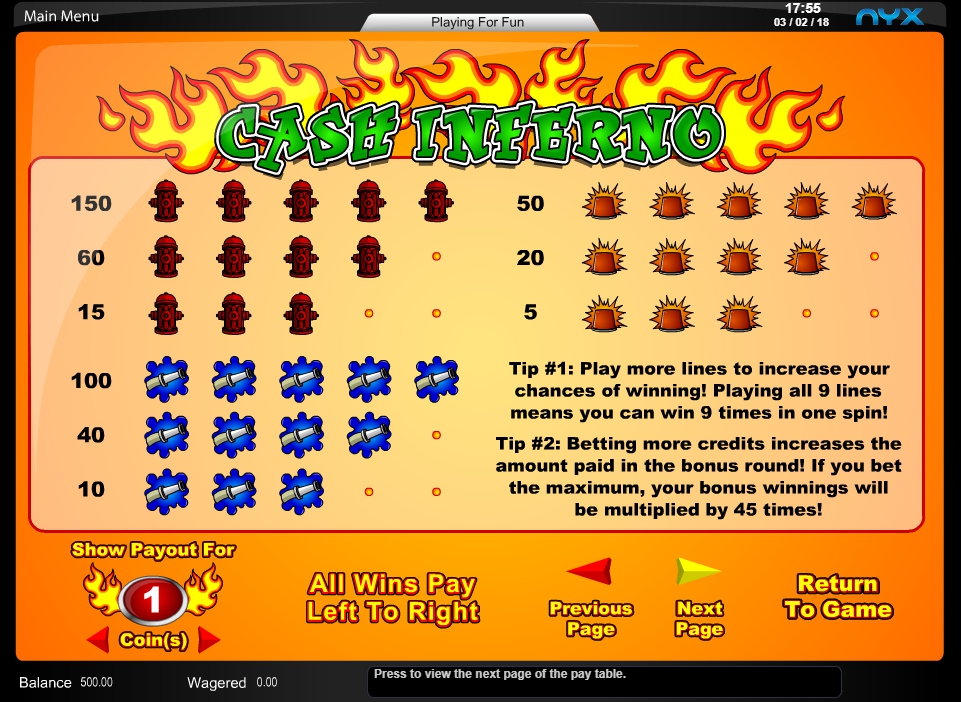 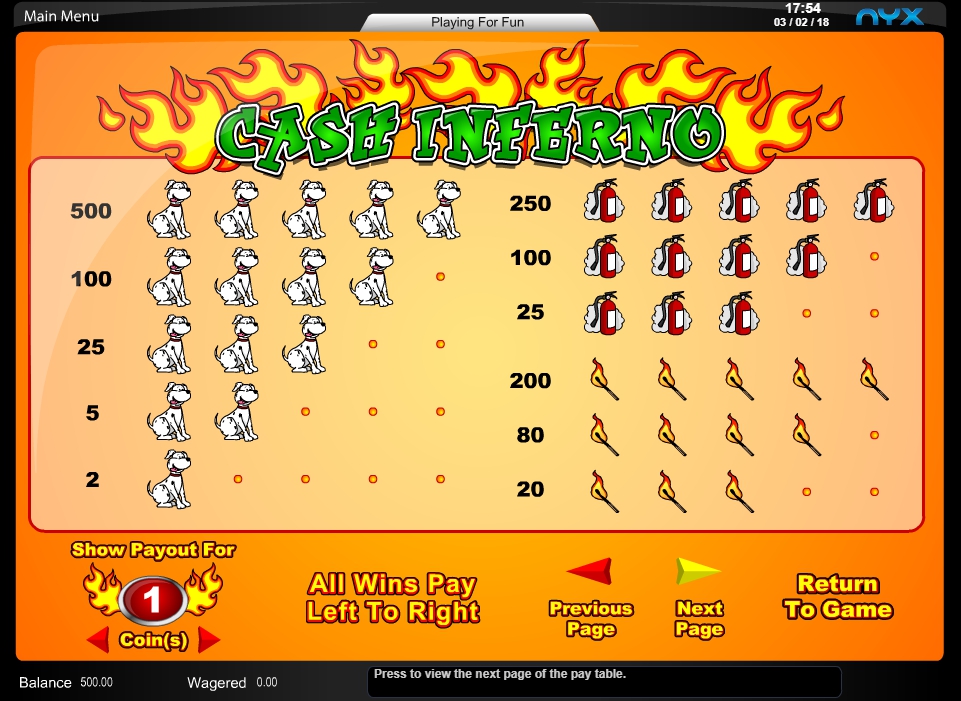 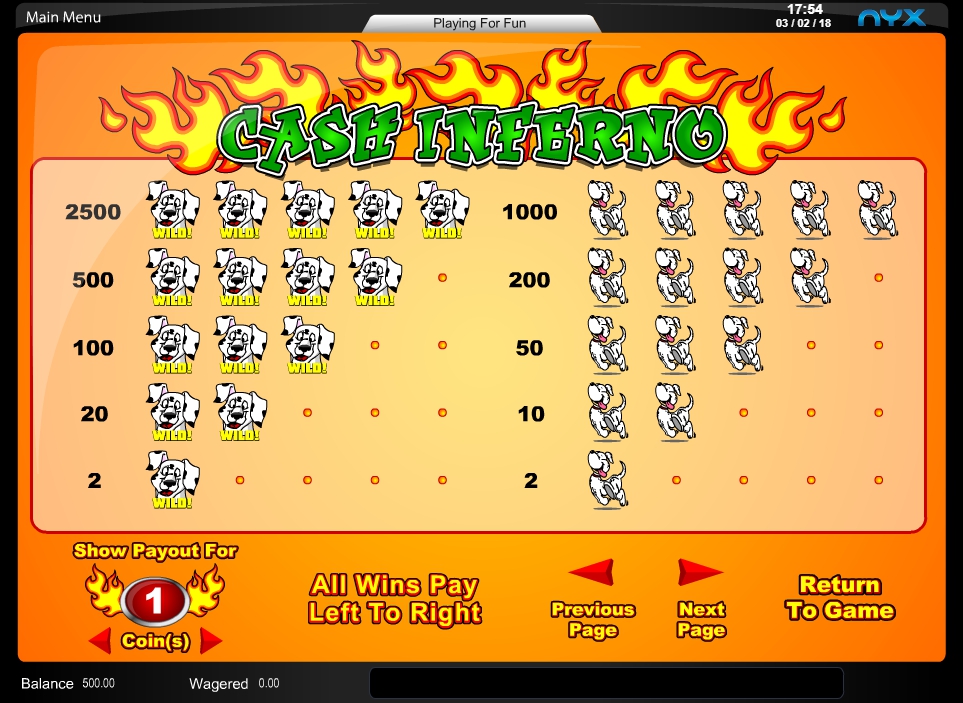 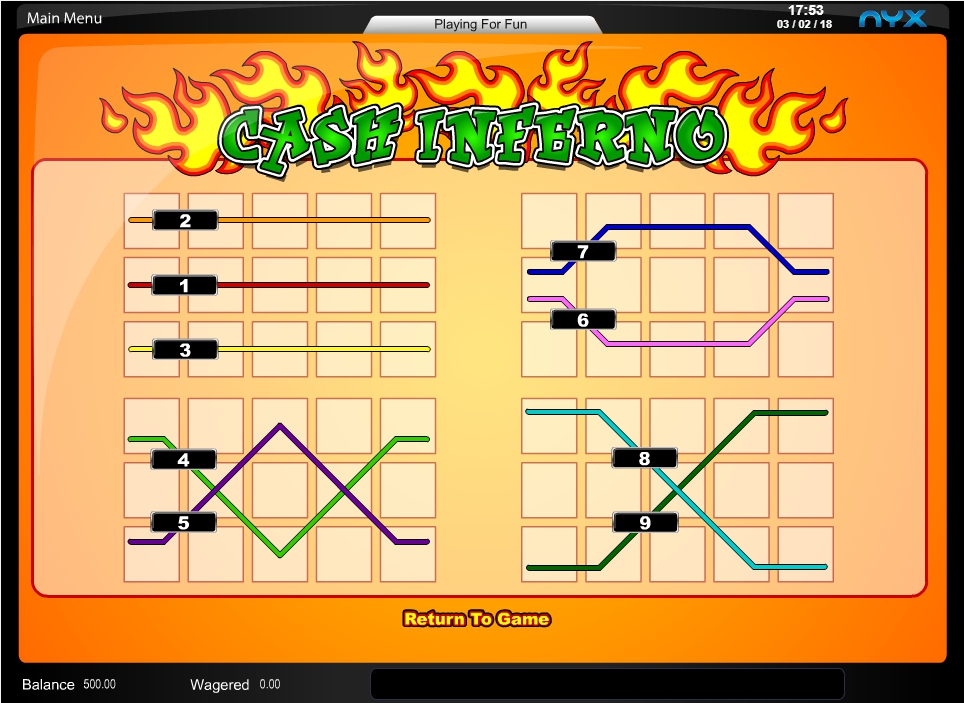 Such a developer of slot machines like Amaya always chooses interesting themes for their products. This time, a game was introduced for people who like risk in all senses. Just the name of the machine – Cash Inferno causes an association with something very mesmerizing and frightening. But in this case the title slightly different from the filling of the game: the theme of the struggle between good and evil is not revealed here. Cash Inferno is 5 reels and 9 pay-lines video slot, where icons of matches, a fire extinguisher, helmets of firefighters and police capes meet. From all this we can conclude that this is a story about how someone set up a fire that needs to be extinguished in time to win.

Cash Inferno interface is executed in bright fire colors (yellow, orange and red). The first thing that a player will see is a brick wall on which there is a green logo engulfed by a flame. Probably, this building of the fire service, which received a distress signal. On the left is the image of Sparky. He is the main hero of the game and, in combination, a wild symbol. In addition to the Dalmatian, on the screen the player will have the opportunity to see different attributes that the firefighter has to face.

If you decide to rush into the burning buildings with Sparky you will need to adjust your bets first. The coins size ranges from 0.01 to 5 and you can set it with +/- buttons. Also, Sparky will help you win the main prize of $ 2,500,000. And we are now talking about real money that you can win at the casino, without registration.
As we have already said, the structure of the online game Cash Inferno includes five reels and nine winning lines. At the bottom of the interface are cells, where you can see the account and the size of the winnings. Below are the buttons that help you manage Cash Inferno. The first button, which should pay attention – View pay table, will help to understand the nature of winning combinations. Button Bet max starts the rotation with a maximum value of rates – 45 credits in total. The main Spin button drives the drums.

Ordinary thematic symbols of the game will form combinations of at least 3 icons, while images with a dog can go into credit even in a single equivalent. The combination is considered complete if it contains enough identical icons according to the paytable, which are located on any of the active lines in turn. Each of the bonus symbols of the rescuers launches the same thematic prize round. The bonus game transfers the player to the place of fire. Here in the street a two-story building burns, in which there are 12 windows. Behind the closed windows of the blazing house are frightened people who need to be saved. Opening a window for which there is no one, allows you to continue the prize game. And every rescued person brings increases in winnings several times. And only appeared in the window inscription Finish stops the bonus round.