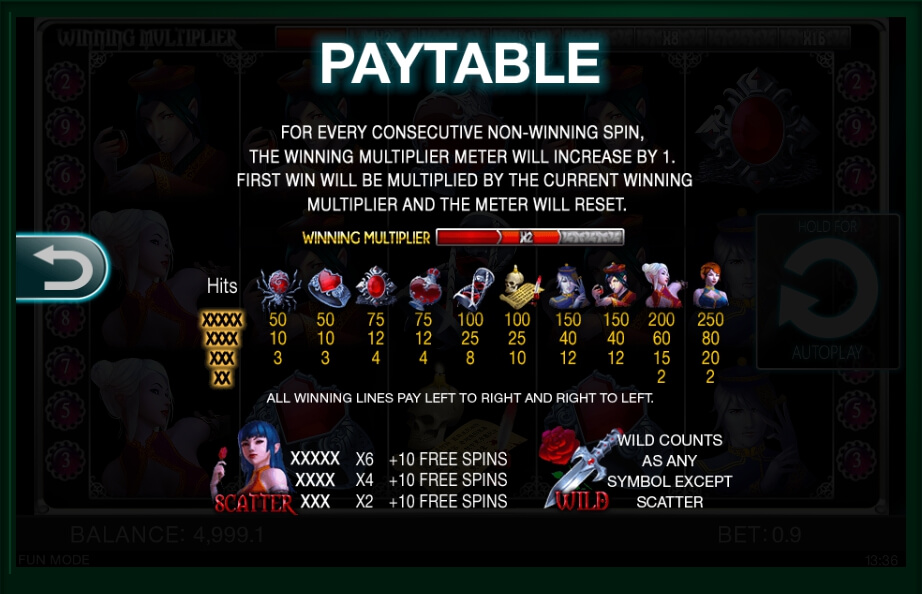 Vampire theme is very popular nowadays, as it is used in films, slot machines, even in cartoons. It would seem impossible to create something new about vampires: bad bloodsuckers, good ones from “Twilight” or “Vampire Diaries” with love story and killers from “Blade”. Spinomenal thought that this theme would have new life if vampires were in anime style. Undying Passion gambling is based on vampire theme offering a lot of night creature’s symbols. Anime style brings something new and modern in the slot game.

Besides, graphics are of high quality, so this slot is eye-catching and attractive. The creators mostly used black and red tints, because these are colours of night and blood, as you know, the best things for vampire. So on the black background, beautiful vampires and their attributes are situated. You will play with three beautiful girls-vampires and two handsome men. It must be mentioned that all attributes, like a ring, a brooch, a bottle and a sandglass are filled with blood. Thanks to that, the game looks more realistic, mysterious and tempting.

The slot offers easy gameplay, but if you are lost here somehow, the menu option on the left of the screen will help you. Start playing with a stake. Choose from 0.01 to 10, and remember that your wins depend on the value of your stake. There is the Autoplay option, use it if you want to have a rest a little bit, but do not want to stop the game process.

You will not see here registration or download, as we want you to think only about the gameplay. The casino game contains 5 x 3 reels and 9 paylines. The lines number is impossible to be changed. To get a prize, a player collects three (sometimes two) or more same symbols on paylines.

The blonde is a little less valuable, she gives from 2 to 200 credits. These two icons are special, as a prize will be rewarded even for two icons with these ladies-vampires. Men-vampires will bring from 12 to 150 payouts. A skull and a sandglass are in the middle, they will bring from 8 to 100 credits.

A spider and a ring are the least valuable, so a player will get from 3 to 50 for them. A brooch and a bottle are little more valuable, a gamer gets from 4 to 75 payouts for them. The online game has two special symbols. Wild looks like a dagger and a rose, rather dramatic combination, isn’t it? Scatter looks like a brunette vampire with a red rose.

A winning multiplier is the most interesting feature of the casino game. It can multiply player’s wins by x2, x4, x8, x16. It is filled when a player gets non-winning combinations.

When the gamer wins, the prize is enlarged by a certain number on a multiplier. Scatter presents 10 free spins and multiplies the win by x2, x4, x6. Wild replaces other icons in order to get more winning combinations and earn more real money.