Legend of the Nile Slot Machine 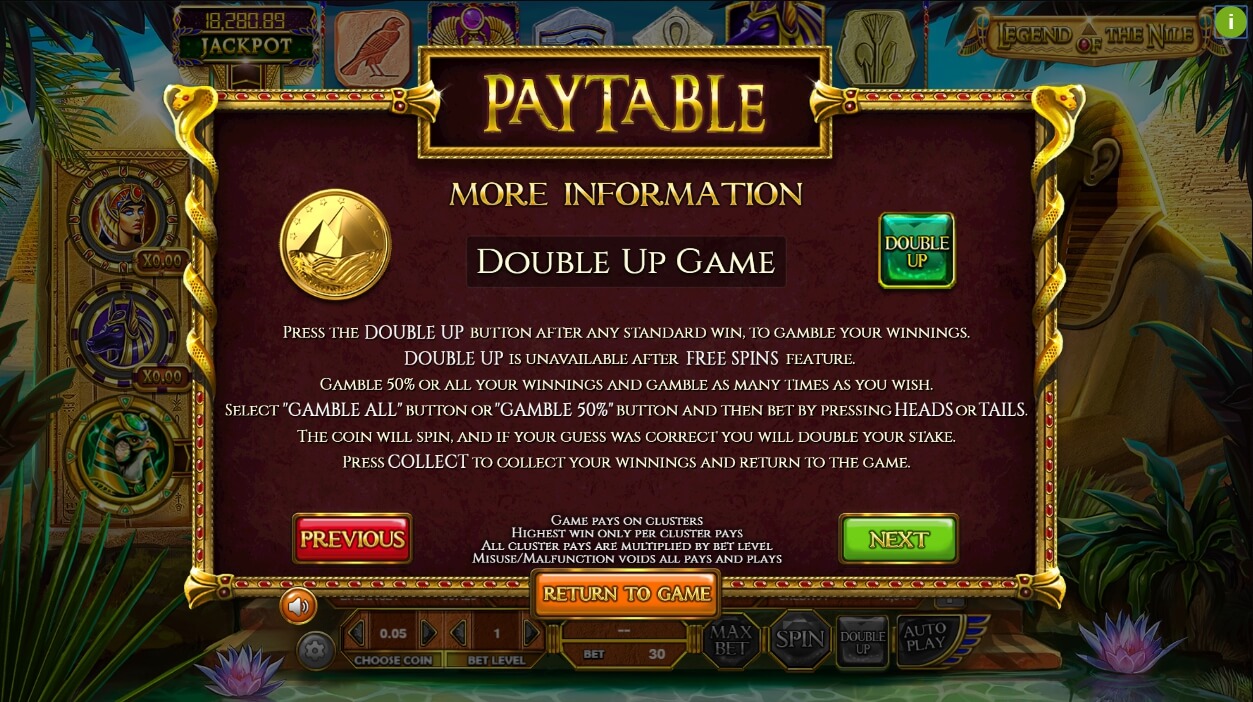 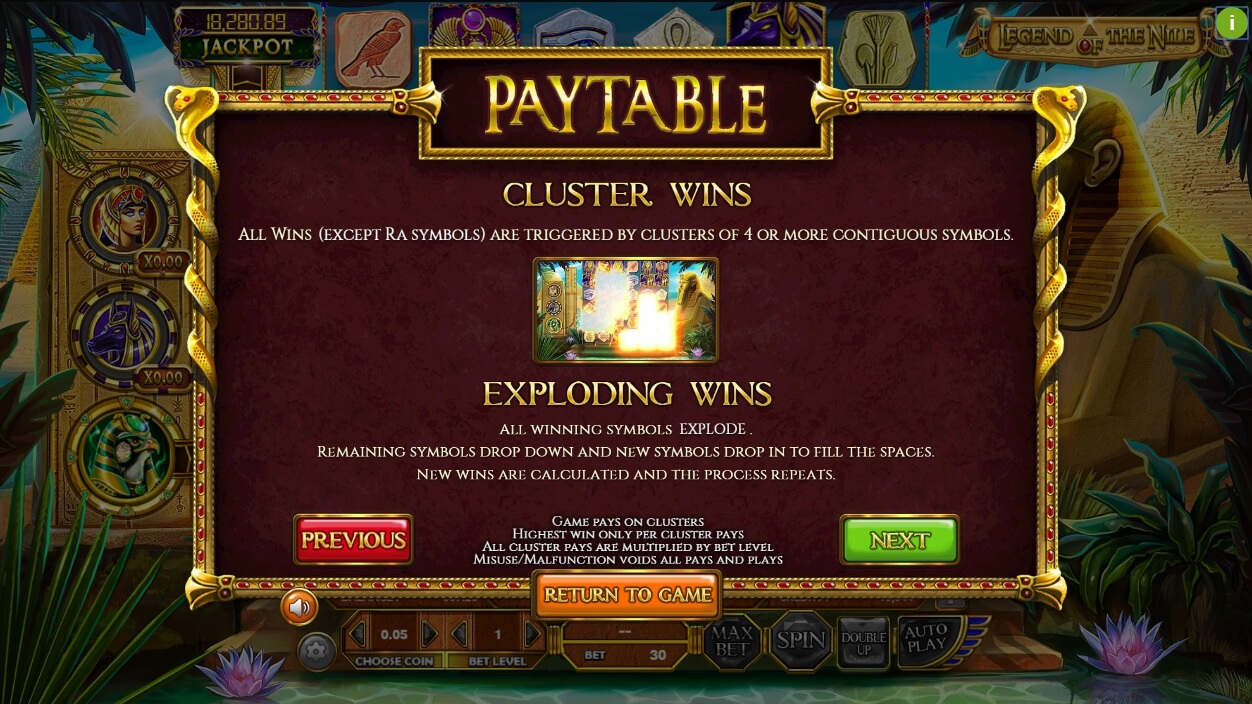 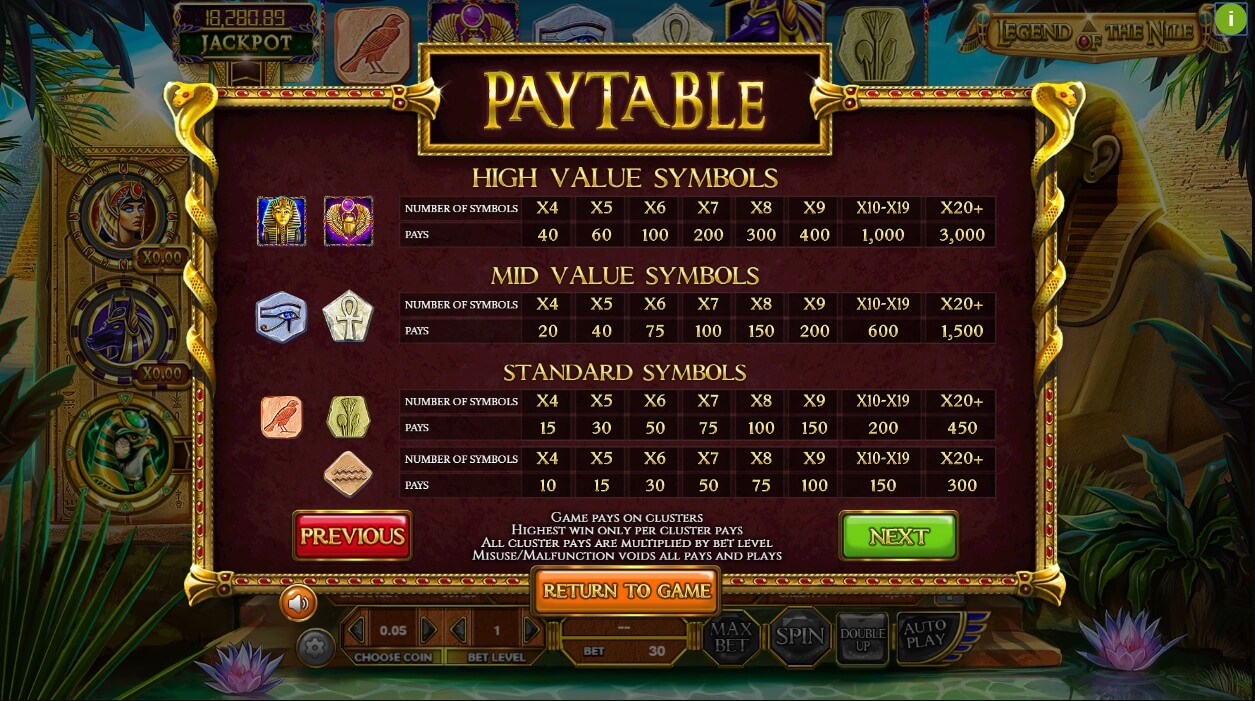 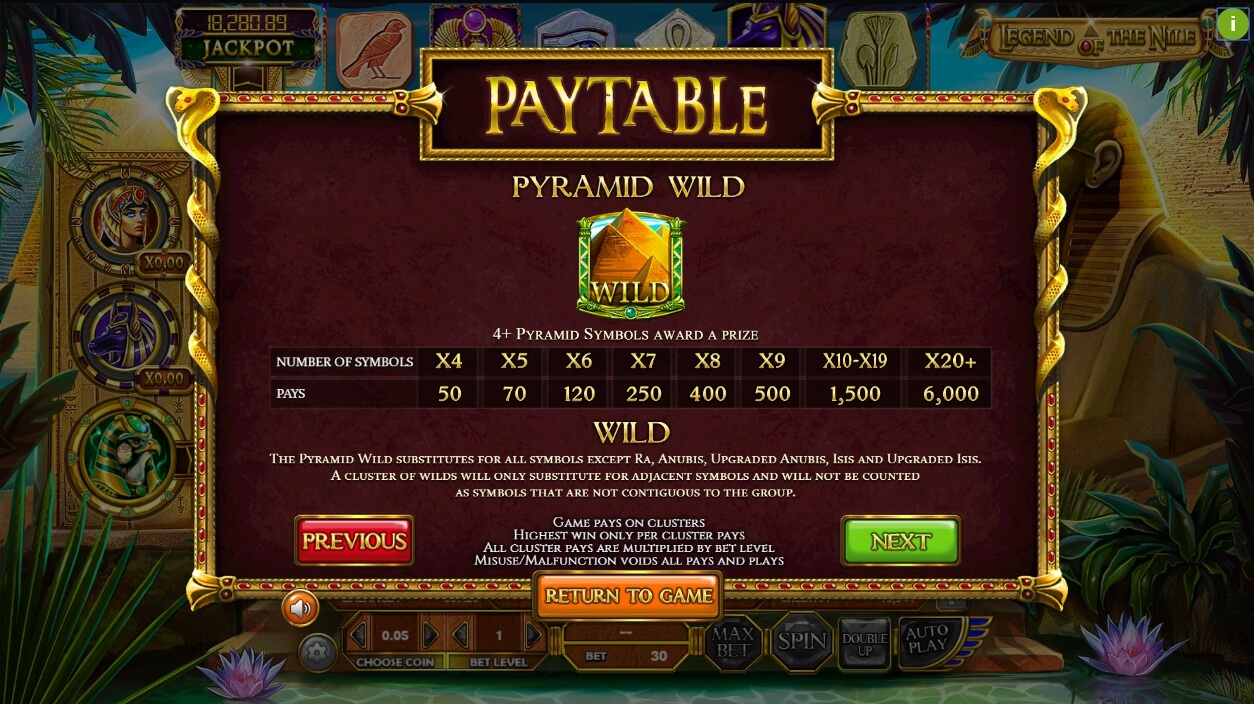 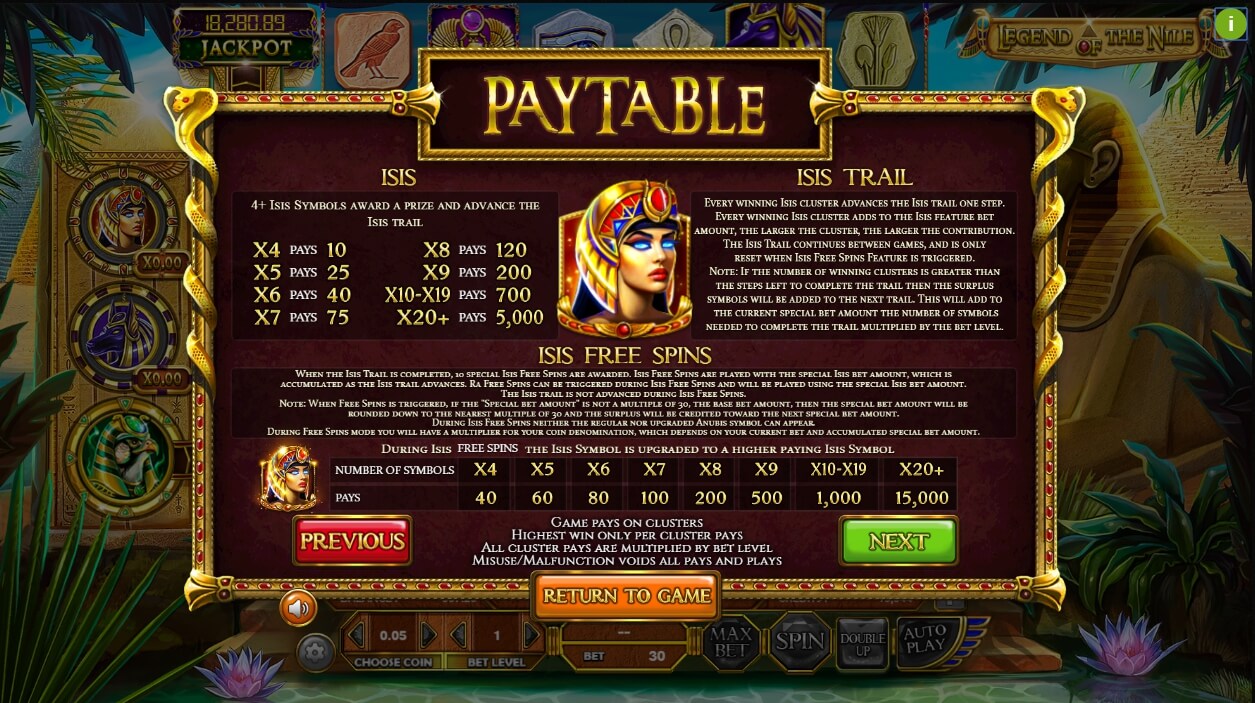 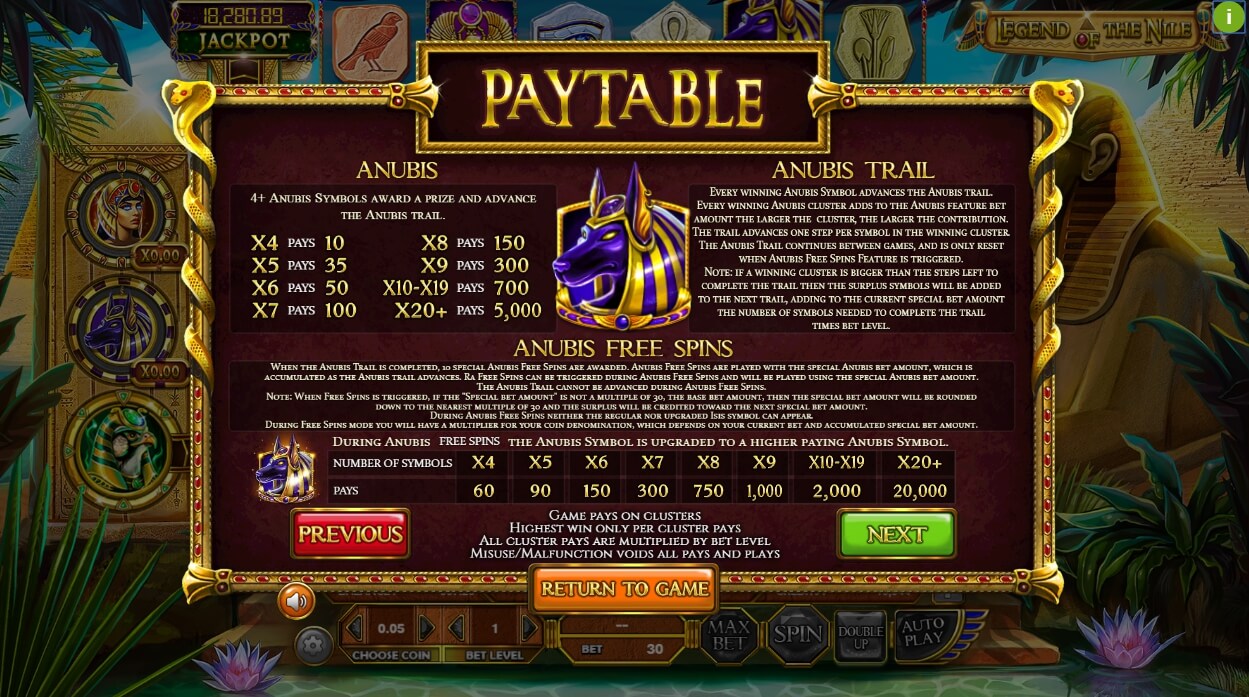 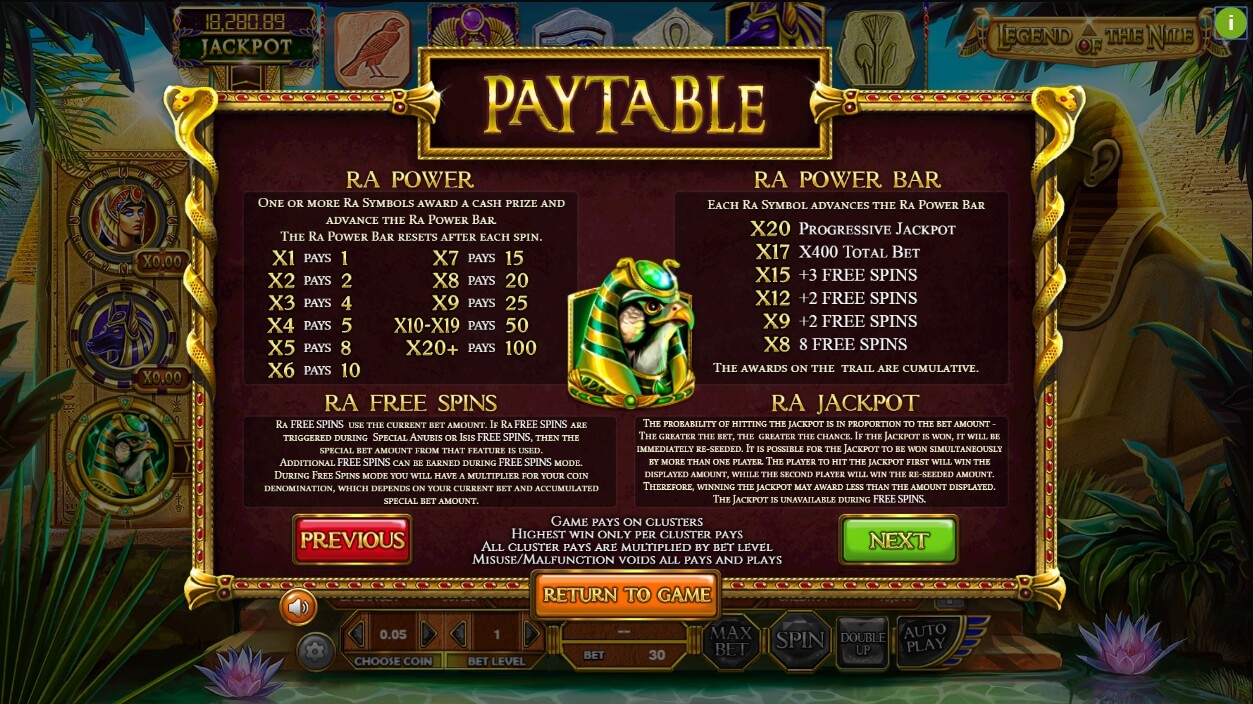 Legend of the Nile Slot Review

Bright thematic slots have always attracted users. As a rule, such games often tell about the culture and traditions of different countries. A slot called Legend of the Nile on the official website of Betsoft is called a “cascading slot”. Such slots are very popular today. Here, the payments are calculated for straight and broken chains of the same elements. By the name of the slot you have already guessed that it is dedicated to the Egyptian mythology. Here a well-known theme has acquired a new flavor that gives users new opportunities.

So, as we said earlier, the story of this gaming machine is the study of the culture of hot and mysterious Egypt. In this storyline, the developers have combined secrets, mysterious rituals, myths and unique flora and fauna. If the player is looking for the slot that is filled with riddles, mysticism and treasures, he/she made a right choice! Also, the development team has used new technologies that made the game more realistic and unique.

Opening the game, the participant will see a beautiful and bright interface. You will be surprised but there are no usual drums. The playing field is built according to the 6×6 scheme. There will appear thematic symbols that point to the ancient cults and rituals of local residents. The graphic designers use a natural terracotta-woody range of shades that does not detract from the game session. In the background the legendary talismans of Egypt are depicted.

The Sphinx as well as the majestic pyramids was qualitatively drawn by the graphic designers. Also here is depicted the mysterious and dangerous Nile. On the left side there is a gold plate with the image of the queen and gods. The soundtrack takes players into trance. The graphic designers have used three-dimensional graphics and animations.

The participant must choose the coin’s value and also make a bet using the appropriate buttons and knobs. The gameplay is available in both manual and automatic modes. A colorful payment table will tell the player the meaning of all the symbols and also show instructions and rules. The gameplay system also includes a special bonus counter.

Ra will give a payment even for one such picture. The more these pictures is on the screen, the higher the ratio is. All payments are calculated at the general rate. Symbols of Ra fill the scale on the left side and can give the jackpot (112,270 coins) or free spins.

So the customer can get 8-15 spins. The payments are calculated taking into account additional factors. The symbol of majestic Anubis does form chains and then it’ll start free spins. Anubis Trail is a counter, increasing with each chain of icons with God. The round of free spins will begin when it reaches the required value. Ishida also brings the winnings and is able to launch the prize-winning backs. Isis Trail is also a counter that operates by the same rules.

It Came From Venus