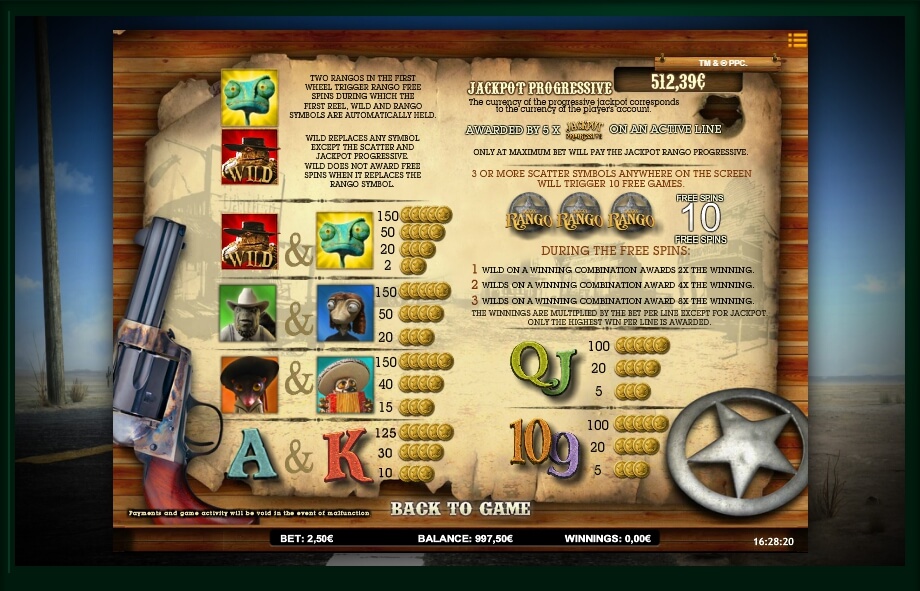 Nowadays, cinema can boast of many bright characters. Film studios created hundreds of films and cartoons that tell amazing stories. One of these is the story of the amazing Rango. This is a home chameleon that is lost in the desert and tries to survive. This lizard was voiced by famous Johnny Depp. In honor of the success of this cartoon, the iSoftBet developers have created a quality video slot called Jackpot Rango. Here, a funny chameleon will give you positive emotions as well as generous payouts.

The main characteristic of the design – the slot machine is almost entirely based on references to the cartoon film of the same name. The sky, desert and cacti are depicted in the background. In a word, it is a description of the Wild West. The buttons of the slot are similar to wooden plaques that can be seen in films about Texas (such tablets are used as signboards of bars).

Game characters are all characters of the funny cartoon. During the compilation of combinations, all characters “come alive” and give payouts and also raise the mood. The attentive player will be able to assemble the cartoon into pieces! Plus, the game is supplemented by sounds that will help to forget about all the problems.

For the game, there are 5 reels with 25 lines. First of all, you must select the number of game lines (the button with the lines labeled). Next, you must set a bet on which the outcome of the game also depends. Fortunately, the slot machine has a wide range of rates (from 1 to 10). For those who want to set the maximum rates, there is a button Bet Max. Of course, each player should study the theoretical section that has information about all the features of the video slot.

Also here you will get acquainted with the table of payments that hides information about all active symbols and corresponding payments. To start winning real money, the participant only needs to click the “spin” button. After that you need to wait for the appearance of paid combinations.

“Serpent” and “Rango” have additional functions: the first one plays like a wild symbol, the second one – scatter. The joker forms chains independently and is also able to replace simple elements. Scatter launches ten free spins. For this it is necessary that in any position on the screen there are three such pictures. During these spins, one Wild symbol in combination doubles the payout. Winnings are paid depending on the rate. Having opened the theoretical section, the client will find information on the bonus level when each visitor can win real money.

But we will not disclose all the secrets and leave intrigue. We just want to draw your attention to the fact that the main prize is 15 thousand coins. You can play for free in the demo mode that is available in our online game portal. You will have time to get acquainted with the slot game.