You can not play this game for free
For free slots game go
Play free
or
(10 votes)
Game Played: 11
Full screen: close 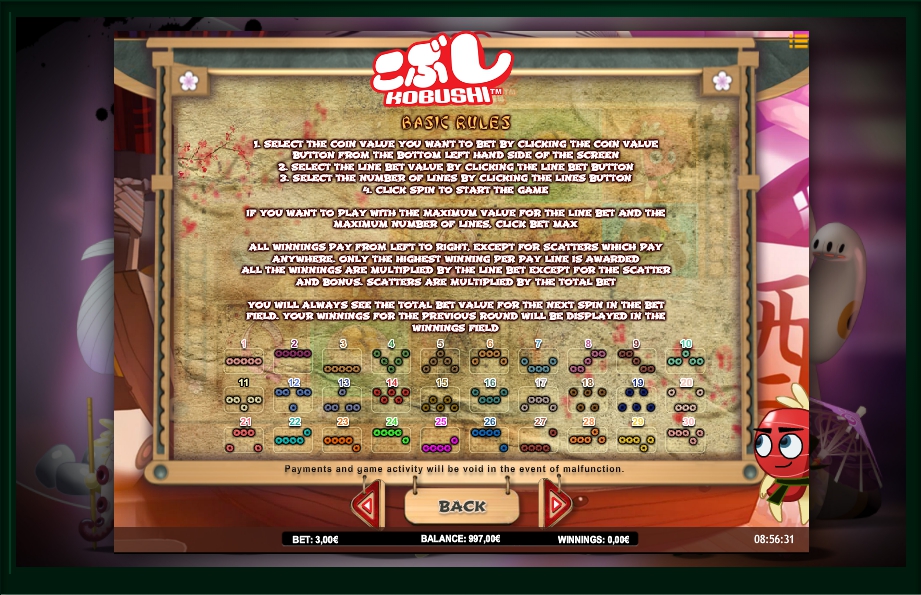 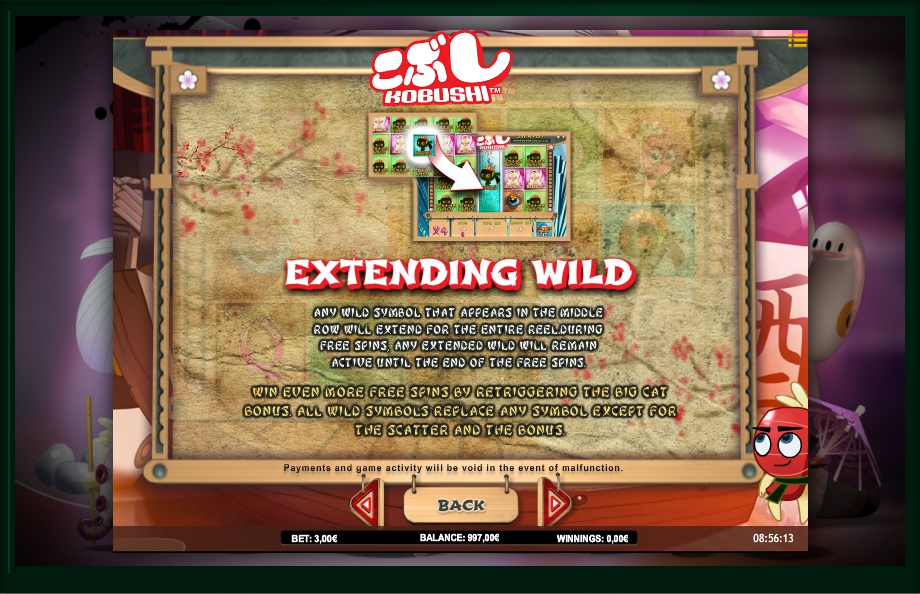 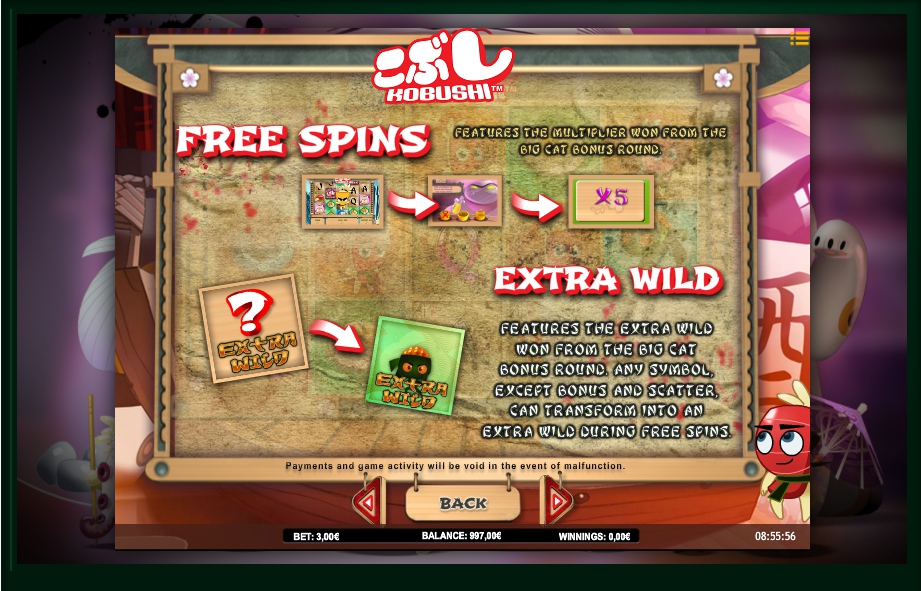 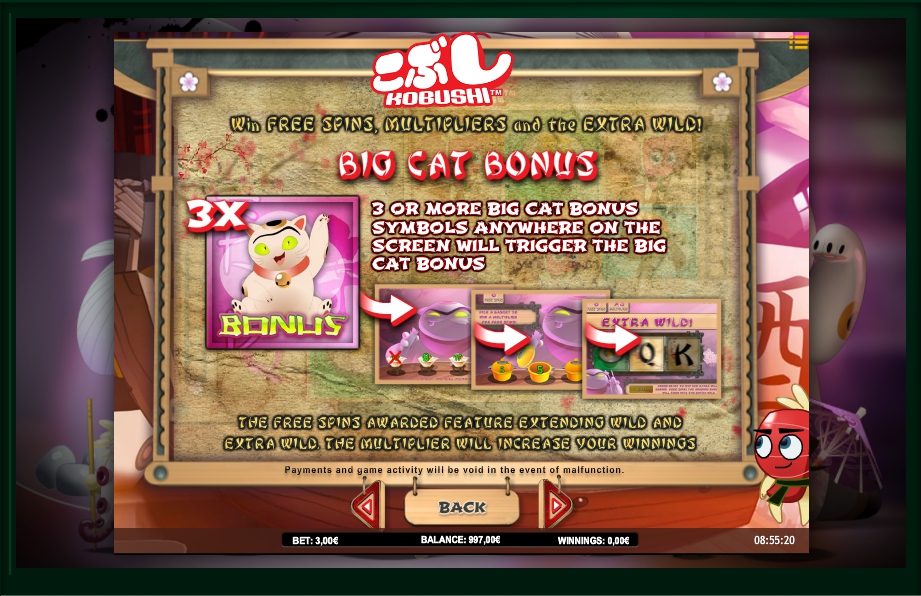 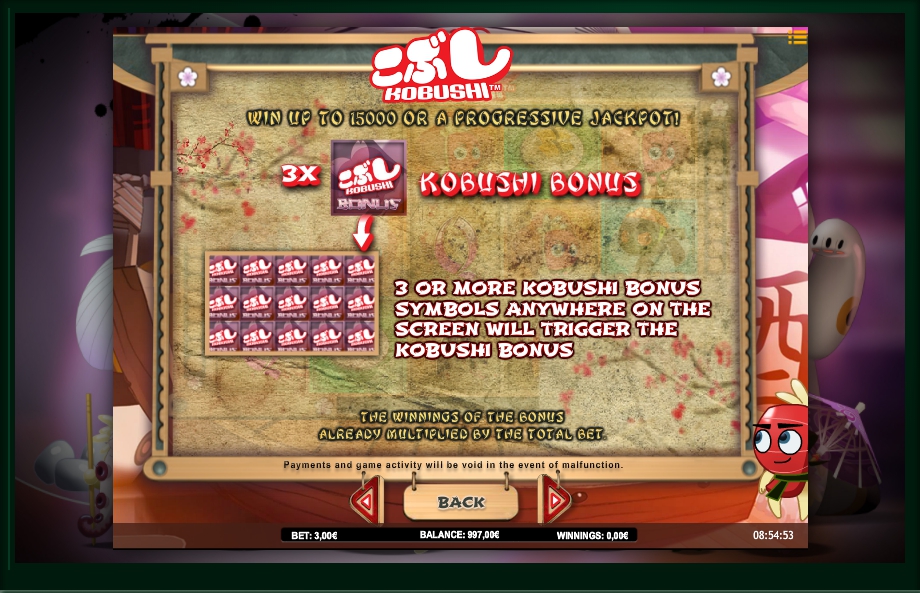 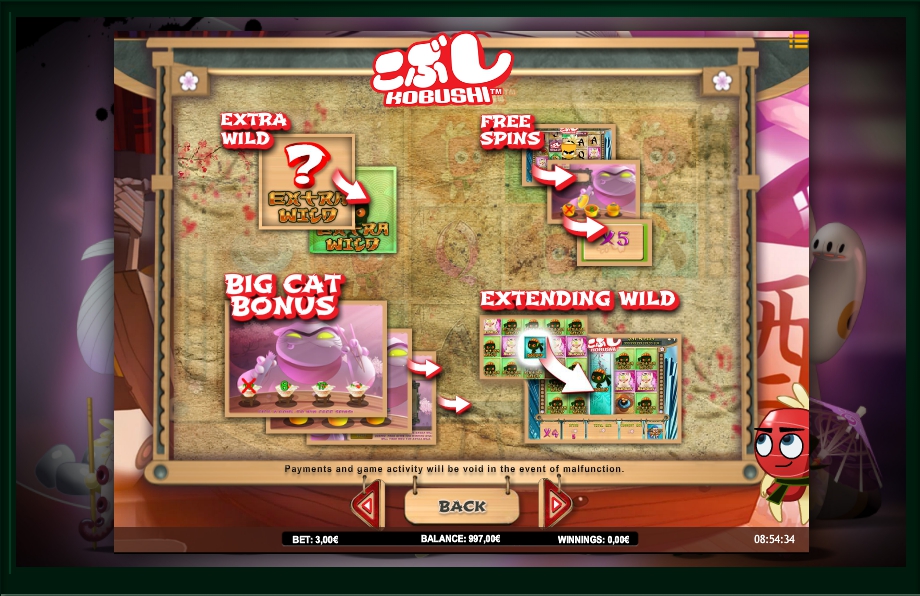 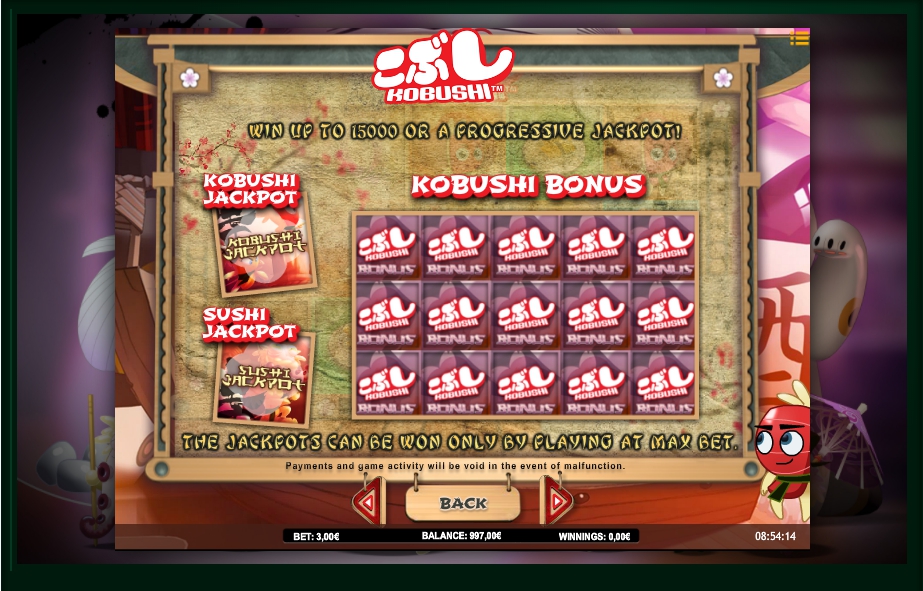 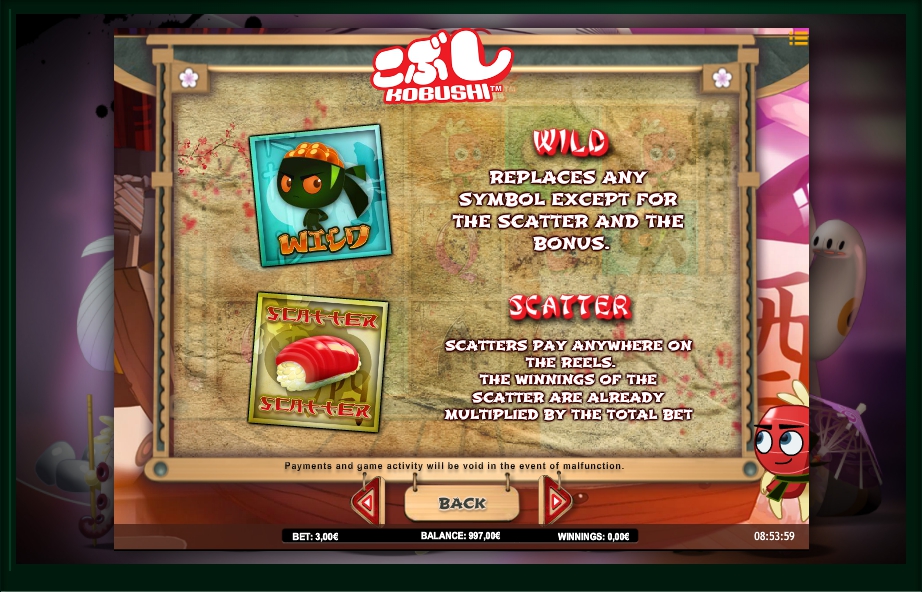 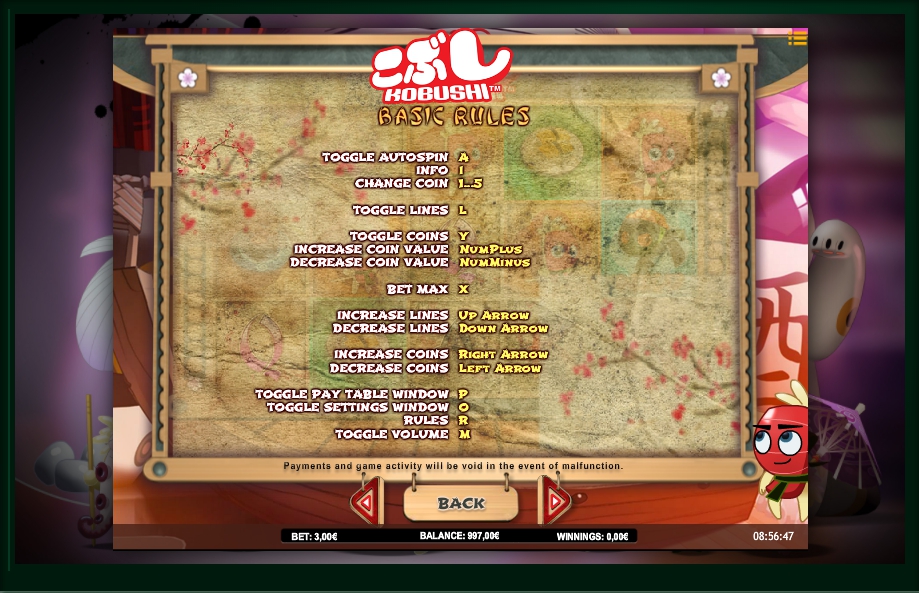 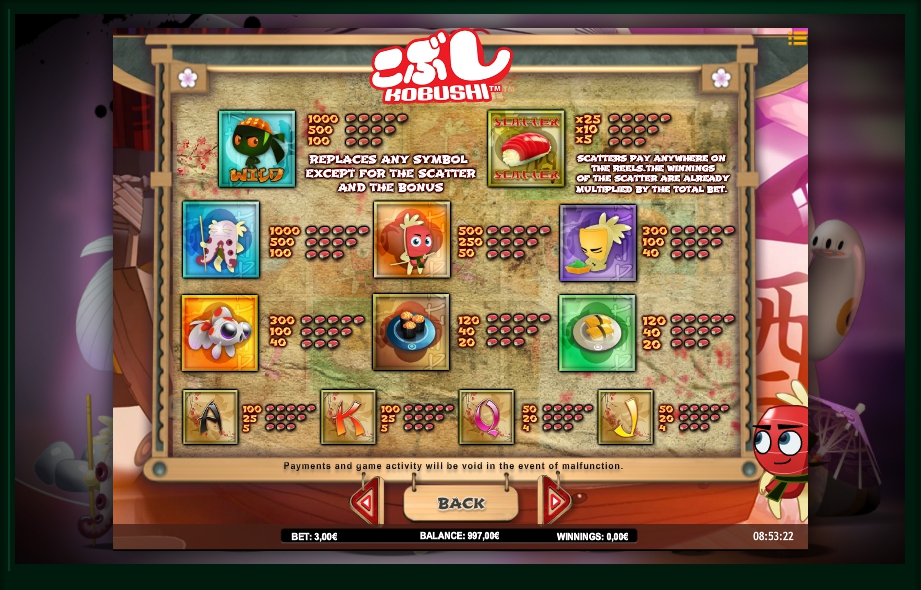 Nowadays there is an active influx of the Japanese culture into all spheres of human life. This is particularly pronounced in the restaurant business. Almost in every city there are at least two restaurants offering their customers to taste Japanese cuisine. Those people who dared to try enough specific food were certainly satisfied with its taste qualities. Of course, unusual food implies an unusual way of eating it. For this, one should try to eat sushi with Japanese chopsticks. What are we talking about right now?

The theme of the slot game Kobushi completely gathered in itself all the cultural traditions of Japan that are related to food. As a backdrop we see a table on which there is a lot of food and chopsticks. The gamefield is represented by five reels which are completely filled with bright game symbols sustained in the Japanese theme. All buttons that control the game look like planks with cherry blossoms painted on them. There are 2 tables of the progressive jackpot on the top (jackpot of kobushi and sushi). But at the bottom in the right corner is a cheerful animated little man who looks like a mouth-watering sushi. With each player’s win he joyfully jumps up and waves with pens of rice. All the rest of the time he closely follows the game and helping not to miss the combinations of victory.

The start of the game is remarkable and differs from the huge number of slots that players are familiar with. To start the game the player selects the cost of one game coin and the number of play lines. When the player performs all these procedures he can launch the first spin with the relative button with sushi on it.

In the video slot you have an opportunity to try several mini-games. You will play two extra rounds and we will tell you about it. The first of them is as close as possible to the standard bonus round which gives the rewards. This round is represented by a cat sitting on a pink background. Appearing on the screen in the number of three he launches a bonus game.

This cat clearly likes eating, so at the beginning in front of the player are four plates with noodles. By choosing a plate, you try to earn yourself a number of free scrolls. Next, you will need to choose one of the three pots that hides the multiplication of the winnings. The 3rd stage is a random definition of a symbol that will be considered as wild in the bonus game.

After the player has passed all three stages of the selection of the game conditions then bonus scrolls will be launched. At this point the player can try his luck at the fullest. The second bonus game will be opened if 3 specific images come on the five reels. This symbol looks like the emblem of Kobushi on a dark pink background.

The essence of the mini-game consists in opening the cells depicted on the bonus screen. Under each of the cells something is hidden. This can be either a number of loan rates or a cat. If fallen on a catit means the bonus round is completed, but the current bet does not disappear anywhere.

Also, all open cells are added to each other and this amount will «go» to the current balance. During the game and the opening of bonus windows the game will always give the player an opportunity to see some fun animated sections. Also in the slot there is quite fast but not intrusive music.