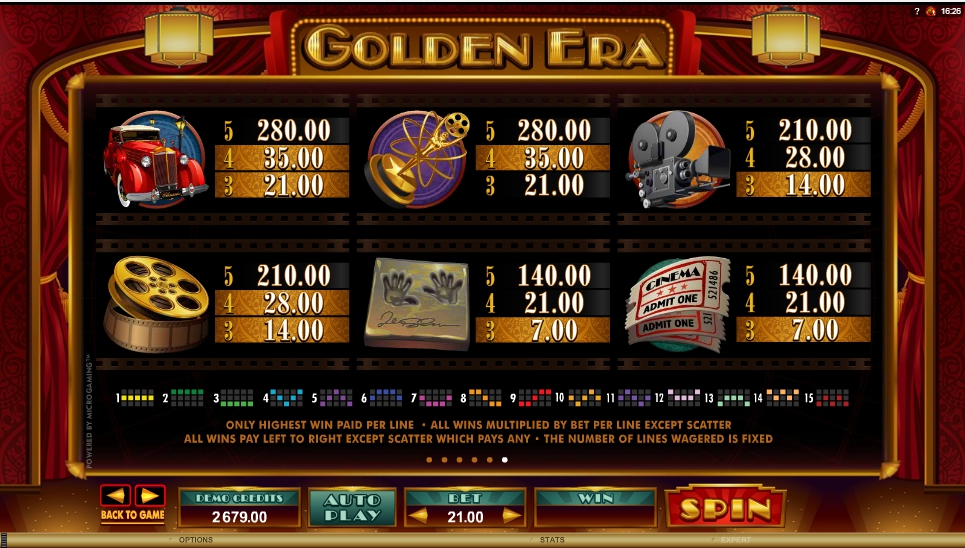 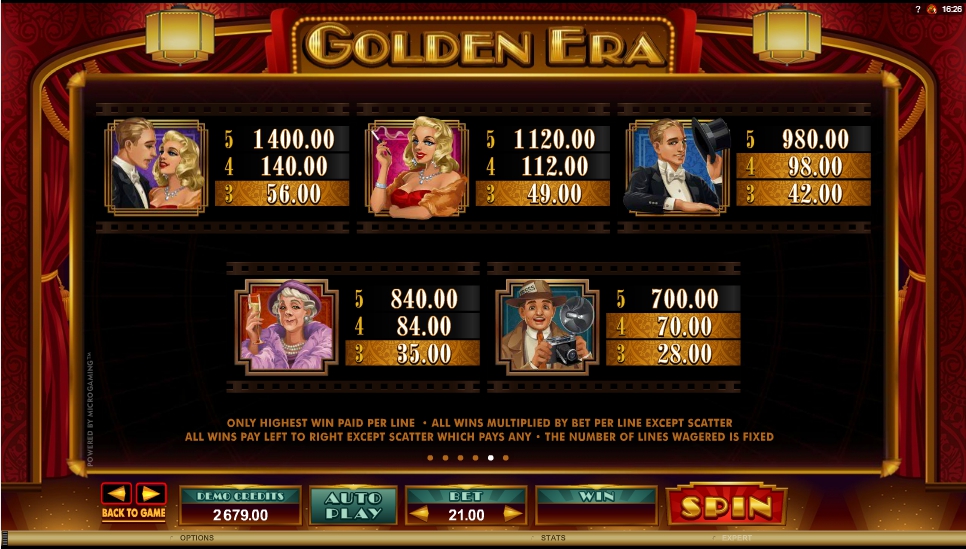 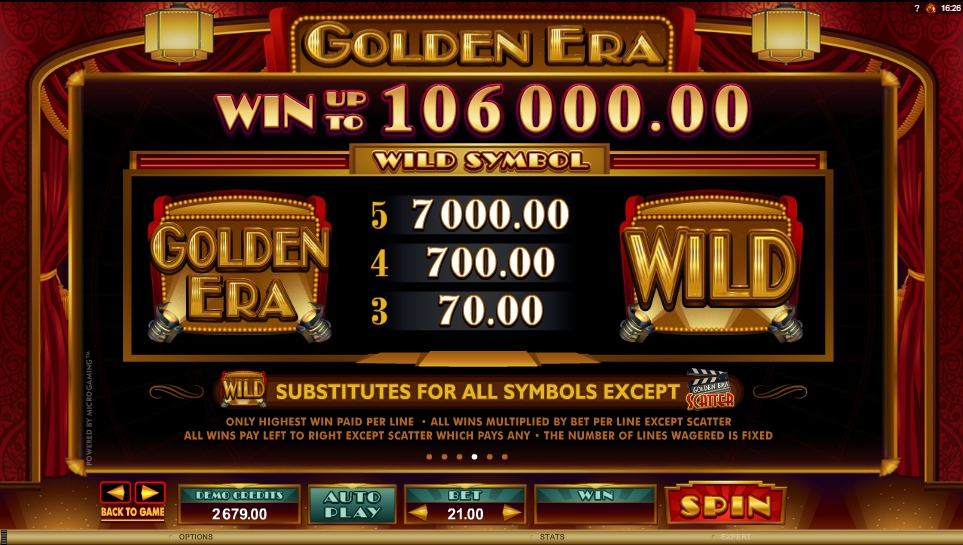 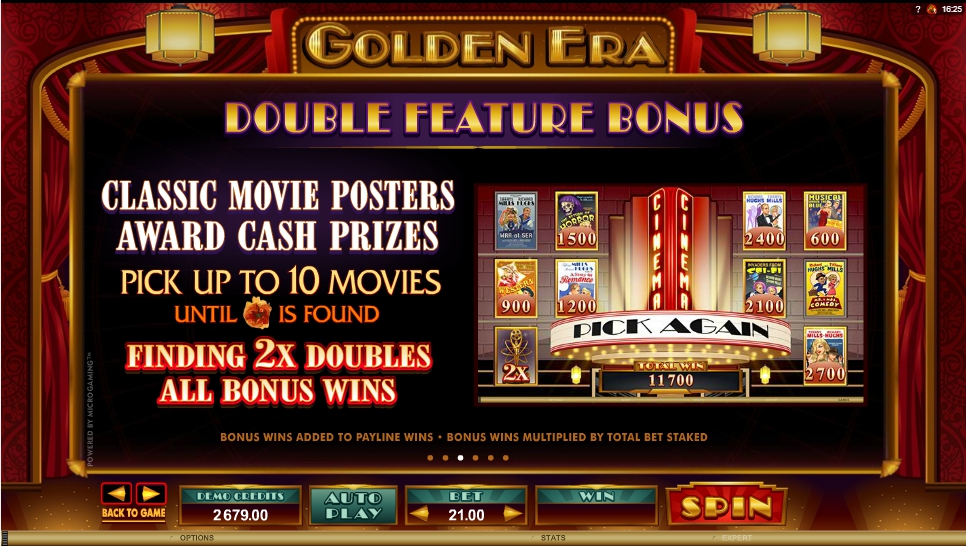 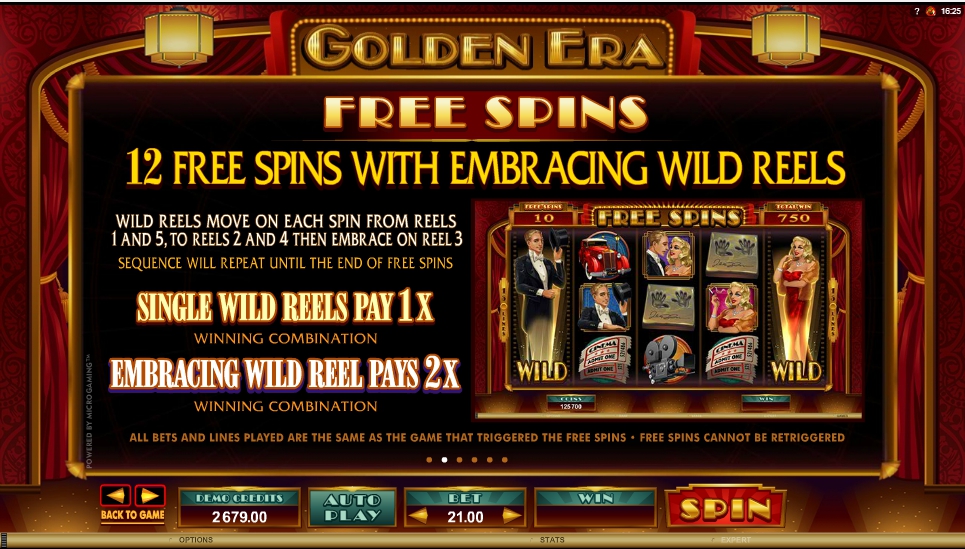 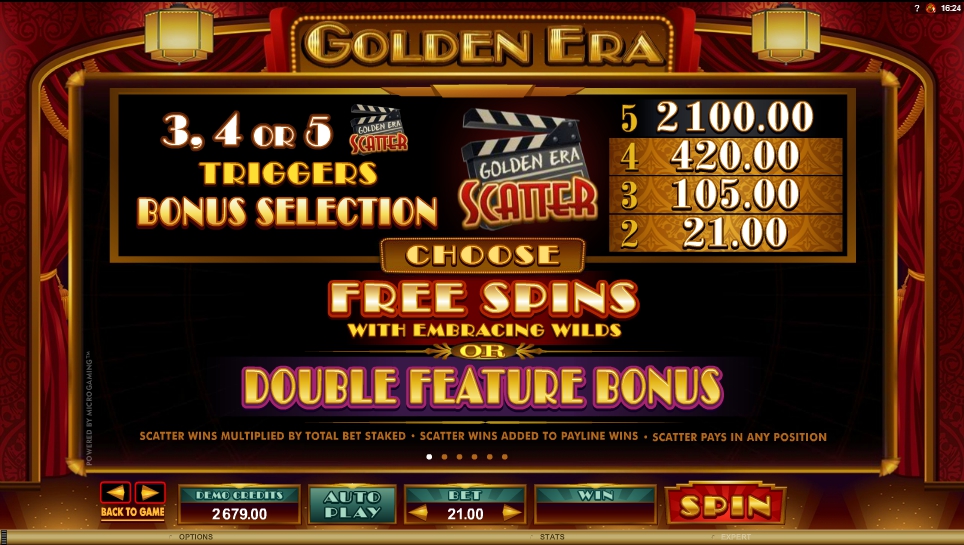 The beginning of the ”Golden Age” in the cinema is considered to be the 6-th of October, 1927. The first full-length film ”Jazz singer” has ”used” the synchronized replicas. Its sound was recorded by the first mass system of the sound cinema – ”Vitaphone”. The manufacturer with refined taste (”Microgaming”) decided to develop an online casino slot for all people who like old classic movies and also, for those who are dreaming about winning real money from their home chair. This video slot has a name Golden Era.

The very elegant gameplay will impress you for sure

5 light-beige reels are on luxury red curtains. By the left and right sides of the playing grid are vertical oblong golden plates (not those that we all are used at the kitchen) with the dark, almost black, text: ”15 LINES”. (Exactly this number of paylines ”plays” in the slot’s game.) Under the reels, you will see regulating bluish buttons with snow-white titles. If you are ready to make a choice of your future wager, then you need to use the golden ”<” and the same colored ”>” that are located under the button with the ”BET” title.

After doing this, press the spin-button in order to start a game. You can use instead of it another cool option – the ”Autoplay” mode.

Almost all Golden Era Slot’s symbols are cinema-themed: few tickets with the text: ”SINEMA *** ADMIT ONE”; handprints of a famous person and down them an autograph are visible in a large metal ”brick”; a possibly ”movie” wound on a flat coil; a red vintage car with a white top and wheels; an exquisite golden trophy in the form of a human that is holding a movie reel over his head and a large grey motion camera.

Bonus rounds are so amazing!

There are expensive icons that you will not meet in standard games: a ”hot” young blonde with dark-blue, like two lakes, eyes and bright-coral lips is holding a smoking cigarette between her fingers.

This is Syntia Gladis who is adoring luxury dresses, expensive jewelry, and mantles. A young gentleman wears a black frock coat, white shirt and a ”snowy” tie-butterfly, with a charming glance of gray-blue expressive eyes, holding in his left hand a ”cylinder” removed from his head.

James Karmings is elegant to his perfectly arranged dark-blond slightly wavy roots of the hair. In a light-purple fur coat, raising her glass with sparkling champagne, is an elderly woman with a shadow of beauty in her wrinkled face and the gray curls that are beating out from her hat.

Missis Dellawress Grey is a widow of a respectful gentleman. Modestly dressed (a worn gray hat, a brown jacket, a white, somewhat ironed shirt and a long brown-mustard tie), a good-natured man is holding a retro camera. Richard Yansson is a master of his craft.

Standing next to each other are Syntia and James. ”GOLDEN ERA” is a logo and also wild here. Find 3+ ”Clapper board”s and (oh, magic!) you will have a choice between ”Double Feature Bonus” (is interesting because of playing with 10 movie posters) or not re-triggered ”Free Spins”.