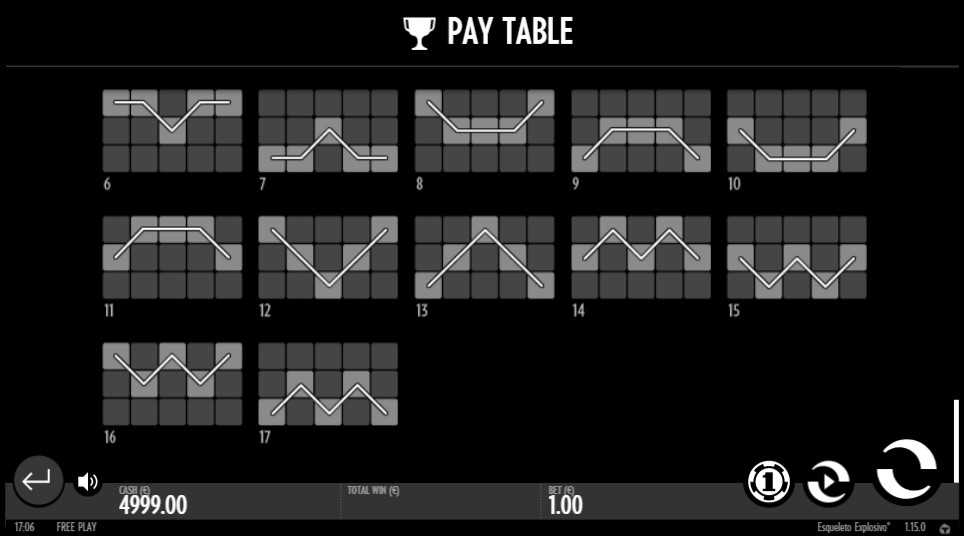 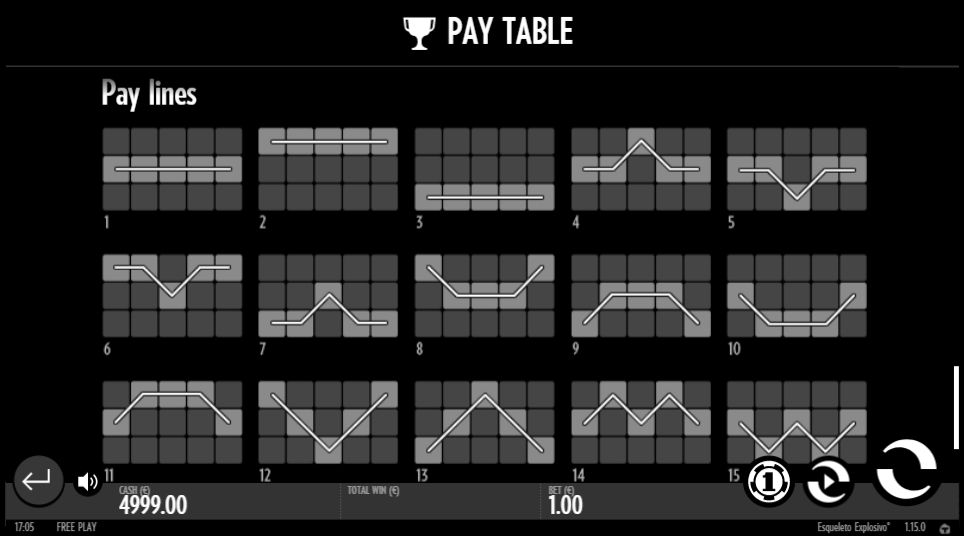 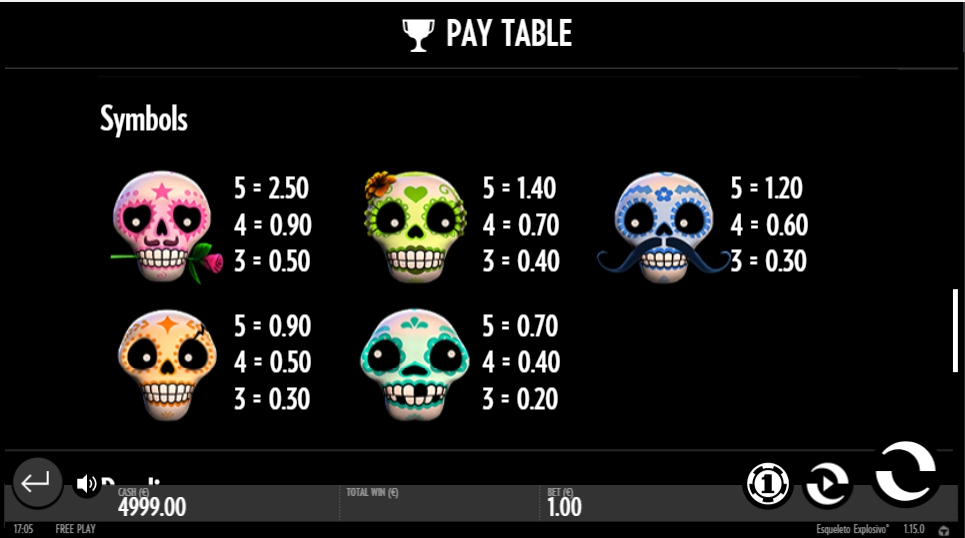 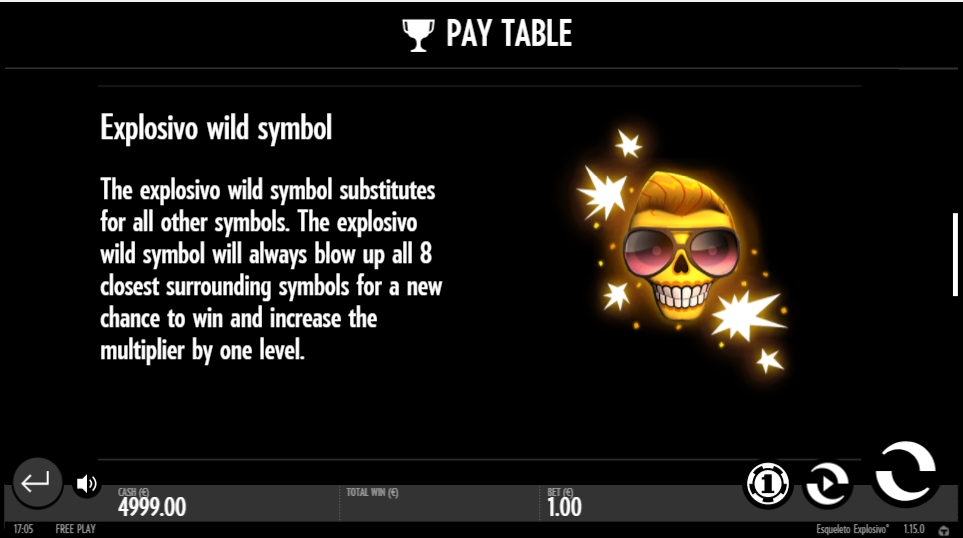 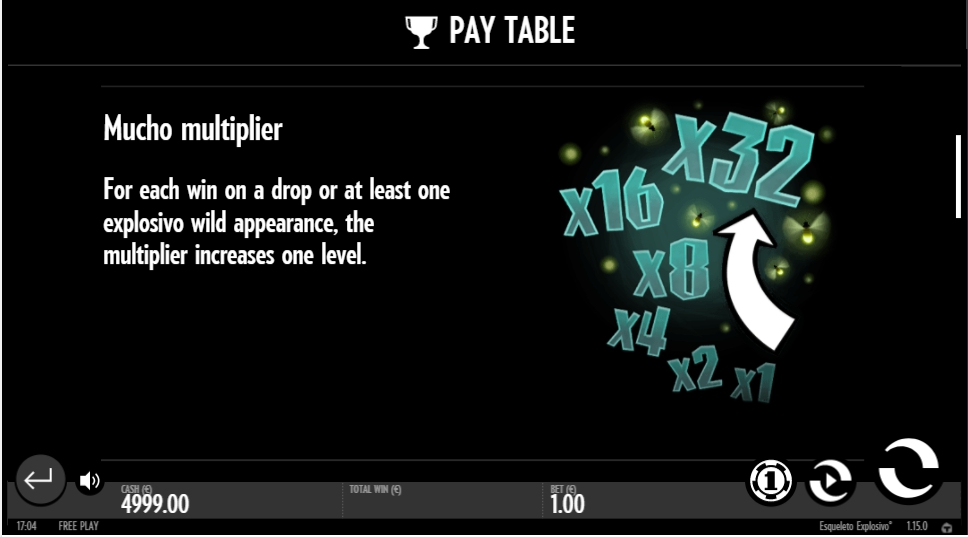 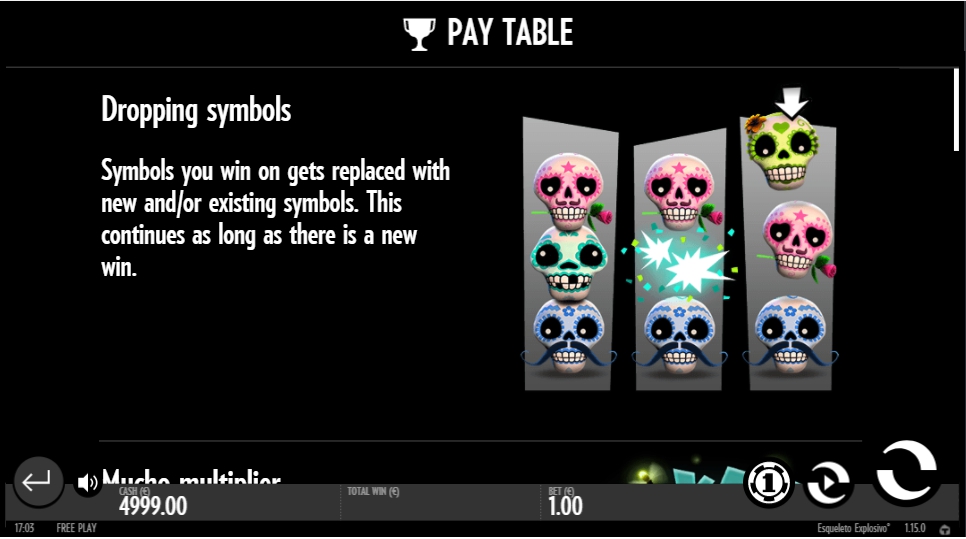 Parade of the Dead… These words most likely conjure up an eerie picture of a zombie apocalypse, when the bloodthirsty resurrected dead walk in search of a human… BUT! An amazing online–game Esqueleto Explosivo is the exact opposite to the plot of all kinds of horror movies. A merry Mexican holiday in honor of all the dead is the main theme of this virtual slot. Inspired by the theme of man-made home altars in memory of the departed into the world of another, the game is not at all sad: funny skulls continually play Mexican folk music, wink and noisily explode.

The amazing online-game Esqueleto Explosivo is made by a whole circle of colors, however, the game takes place in the dark, and so the palette is more muted and does not detract customers. Excellent 3D graphics, animation, as usual at the highest level, in one word–this slot–machine is designed for the latest fashion squeak.

Each skull on the skeleton is painted with Mexican patterns of pink, green, blue, orange and turquoise. The background is a quiet street somewhere in Mexico, a nook and cranny that is full of colorful lights on candles. In general, the painstaking work on the design company-developer of this game, the Thunderkick conducted superbly.

The online device Esqueleto Explosivo has 5 reels and 17 paylines. In general, the rates in the game are fixed and are as follows: 0.10-100 coins. You can select a bet, just press the Bet label or on the game badge icon on the lower right of the game space. It is worth noting that the distribution of rates on the lines remains a mystery, the answer to which either producers themselves know, or these funny skeletons. The lines in this slot machine are fixed and always active. After drawing a victory combination on any line, the combination of skulls-symbols explodes, and in their place come other funny images.

The “Explosivo Wild” image is an interesting innovation, anytime one of these lands on the screen it will explode whether somebody does have a victory combination already on the playing field or not, taking the eight surrounding symbols with it. There’s no payout increase for a combination containing a Wild symbol, but as each one effectively covers a 3×3 block on screen then every time you get one of these you have a real good shot at progressing up the multiplier bar!

The multiplier starts at 1x and can go up to 2x, 4x, 8x, 16x and 32x on every consecutive win. The multiplier also increases if the Explosivo Wild symbol appears. The Explosivo blows up the closest 8 icons to where it hits, allowing the dropping symbols to fall into place and give you a chance for another win.

Birds On A Wire