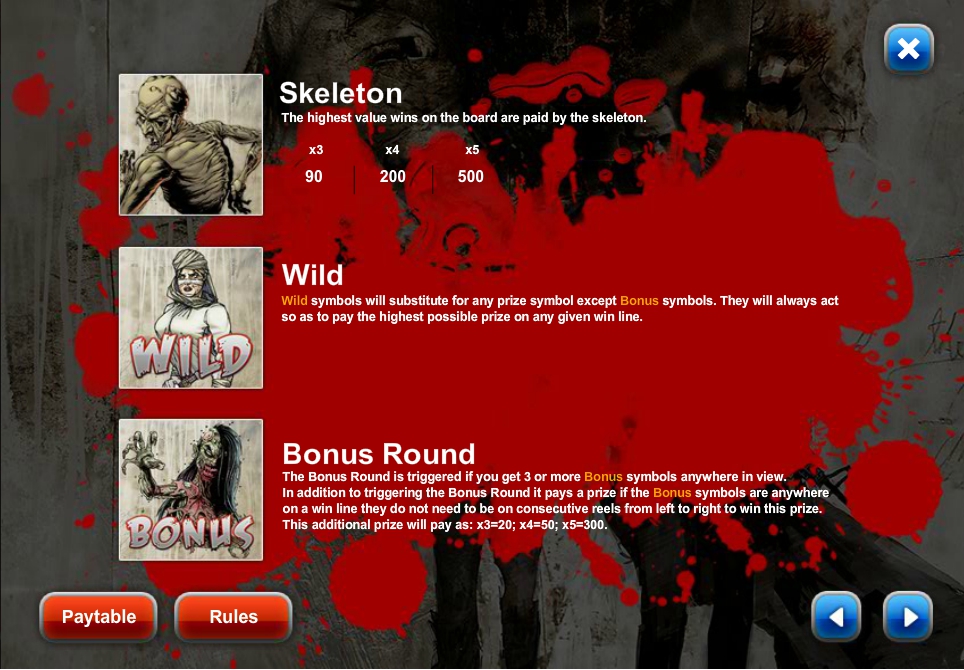 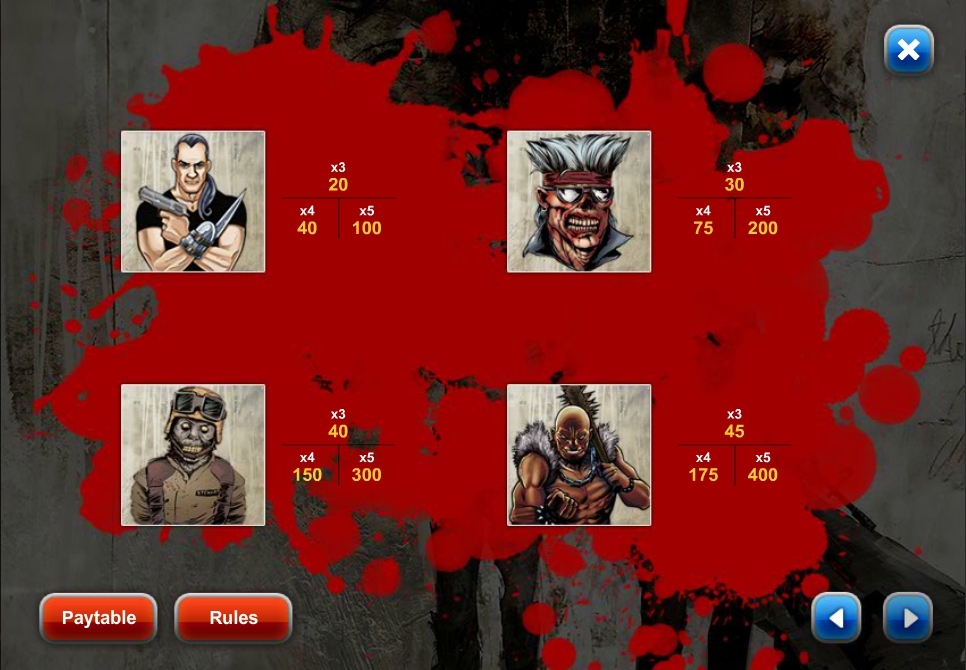 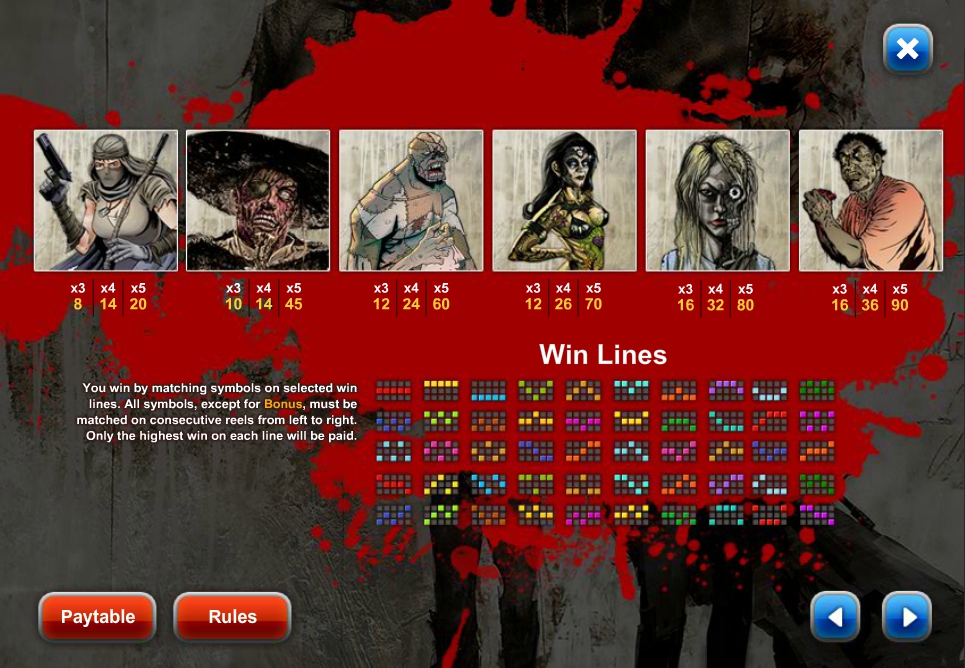 ”1X2gaming” has created an absolutely psychedelic video slot specifically for the fans of the post-apocalyptic future with elements of a “deadmen” (zombies, half-traits, half-humans, walking dead) and futurism in every element. Find Deadworld Slot in the world wide web, in the one of most nice for you online casinos and at first switch on the ”test”-mode for the practice of using the current slot machine. (You will not need to lose real money, make downloadings or/and registrations.) Gamblers can stay at home, in Las Vegas and enjoy this zombie adventure!

Five depressed-shabby light-grey reels are divided by a white thin grid. It is hardly to describe the exact background of this gambling. With certainty, we can only say that it is ”smeared” with blood. In the center of the horizontal virtual line, there is a very large ”50 LINES” inscription. Over the reels is Deadworld Slot’s logo: burgundy ”DEAD” (a human skull with cow’s horns) and ”WORLD”, which is written in a weird manner.

Every letter is framed around itself with a white border. Below the reels is more or less readable panel that features title ”Coins” and its blue rectangles-regulators; a light-bloody ”Auto Bet” that can switch on the super option of an ”automatic scrolling”; a deep-blue with a black ”dead bones” spin-button; colored in the same shade as the autobet – the button ”Max Bet” and the ”Coin Value” that has exactly the same regulators as coins-panel. Directly on the ”floor” of the Deadworld Slot’s ”screen”, in the right corner, there are two dark-terracotta buttons: ”Show Winlines” and ”Paytable”.

Oppositely, there is a quartette of deep-grey ”clock”, ”?”, ”settings” and ”mute”. Also, there are informational panels: ”Balance”, ”Bet” (two times), ”Win” and ”Coins”. The symbols (portraits) are not for the faint of heart: Swinglan Parson (is a busty woman with a closed face and a large pistol in a hand); Frendanon Grembaldor (without skin on the face and with a bandage on the right eye, as well as in a wide-brimmed black hat); Lyson Bravis (a bully with a disfigured face, a thick beard and long, ugly hands); Ludwiga Brimginton (sexy female zombie dressed in black bikini); Lamia Daigrjuns (deadly thin with half of a disfigured face and a glassy white eye) and there is in Deadworld Slot, a portrait of Bruno Baibalgands (recently bitten by zombies, a curly-haired almost zombie wears a brick-colored T-shirt with the short sleeves).

There are 4 special cool icons: a portrait of Silverin Harms (a broad-shouldered man with a long tail of steel hair, a pistol in his left hand and a sharp knife from the beginning of his right one); Grumbels Hramfelb’s portrait (with ashy, almost gray, sticking out like a bush, hair a “without lithium” person); Brom Skole’s portrait (looking like if any soldier buried in his own form, dig out three days after his burial); a portrait of Grohos Brogos (a bald mutant-like man with excellent musculature holding a sharp club in his left hand and wearing a furry waistcoat).

The portrait of the female mummy (not so long time ago it was a beautiful young woman – Wioletta Breydjess) in Deadworld Slot is the ”wild”-typed icon that has the power to substitute all (except next going one) pictures. 3 and more Blue-haired ugly zombies will transfer every gambler to a fairground shooting range (you will have only 6 shots (the same number of the bullets is in your revolver) to hit 6 targets. You should not try to hit the head, and there is the random money prize for every shot).

If the horror stories are your lullaby and you are in love with mummies and zombies, then you are just made for each other!

Other Games by 1x2Gaming

Celebrity in the Jungle