You can not play this game for free
For free slots game go
Play free
or
(29 votes)
Game Played: 8
Full screen: close 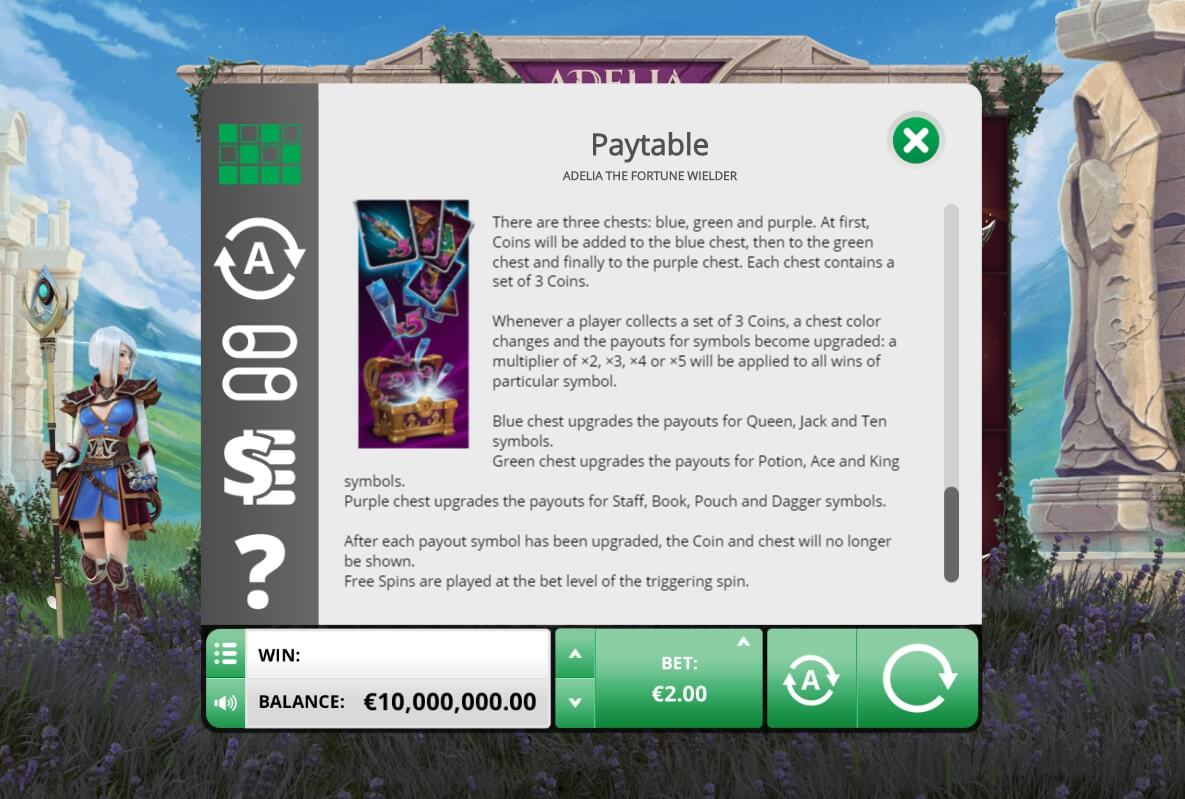 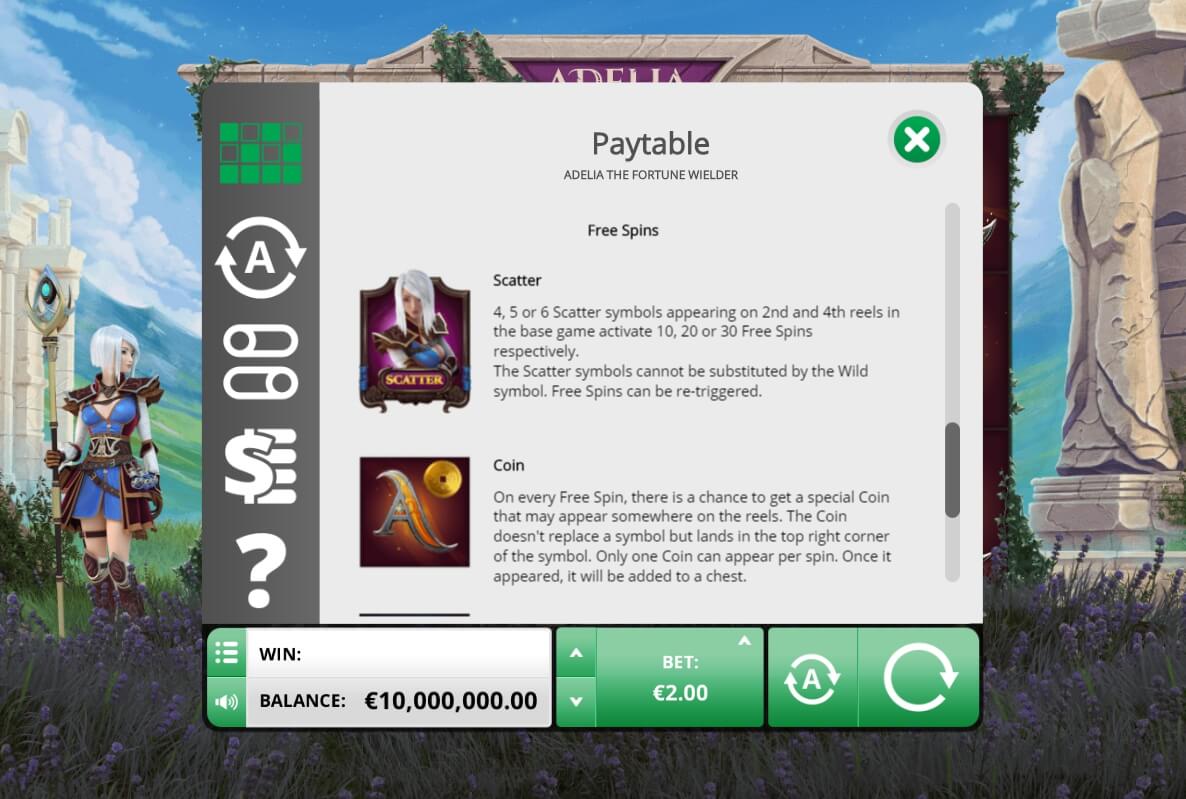 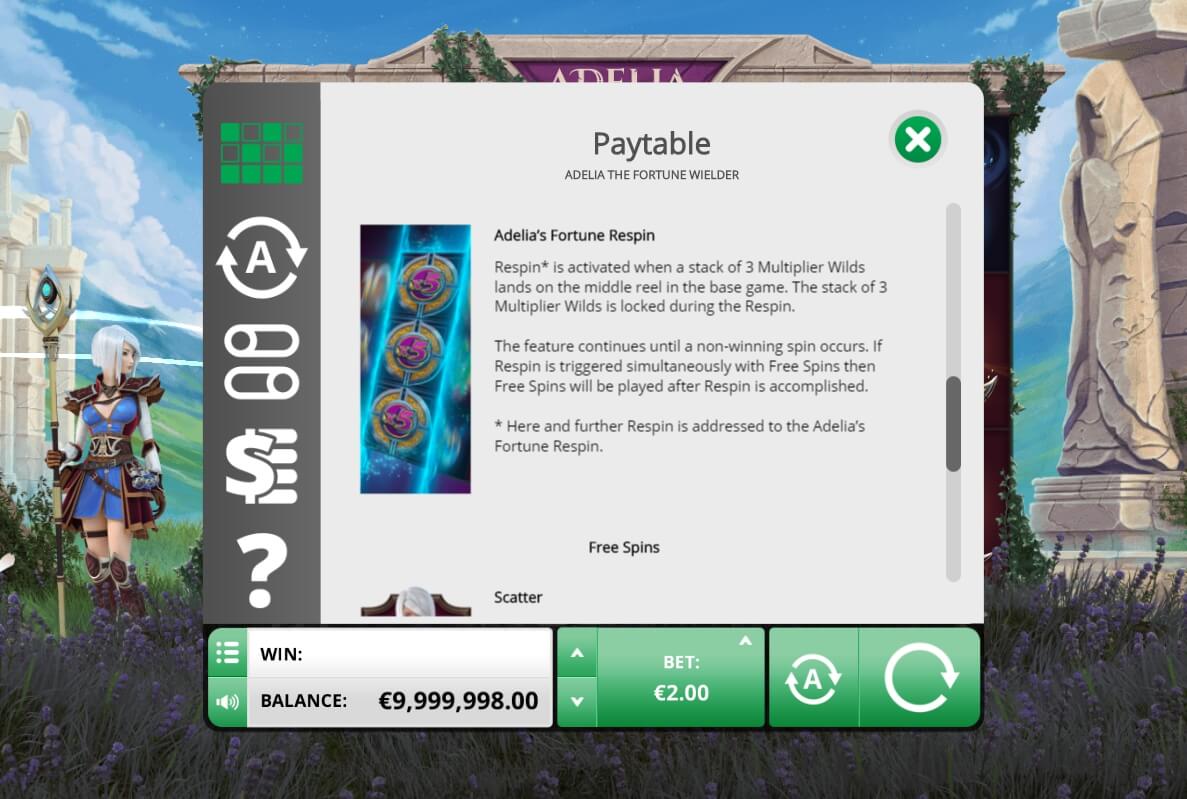 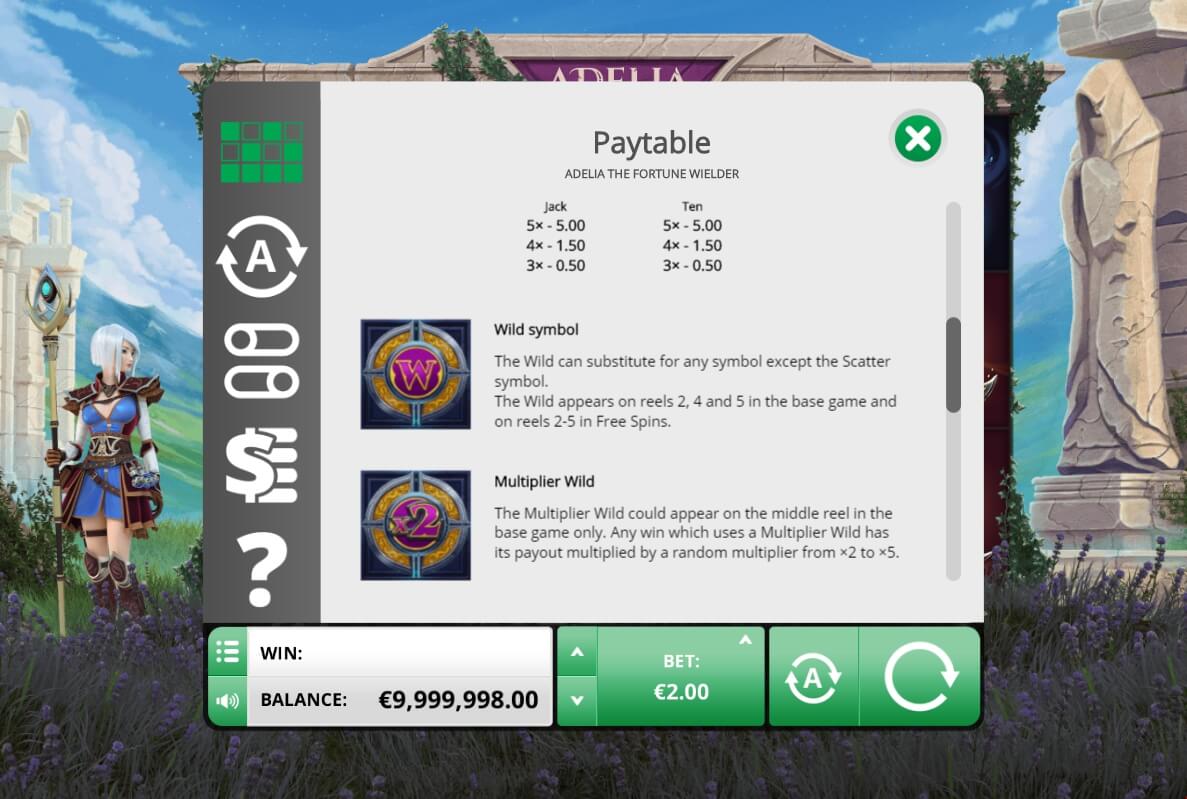 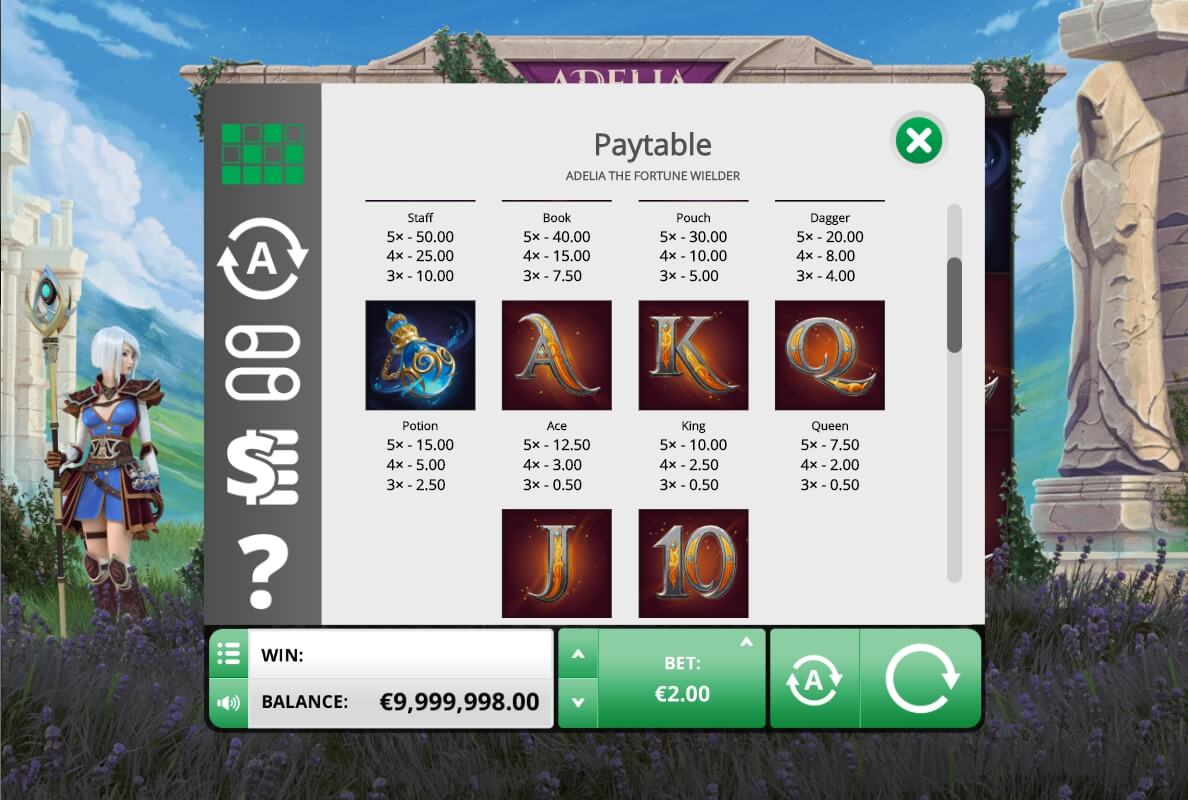 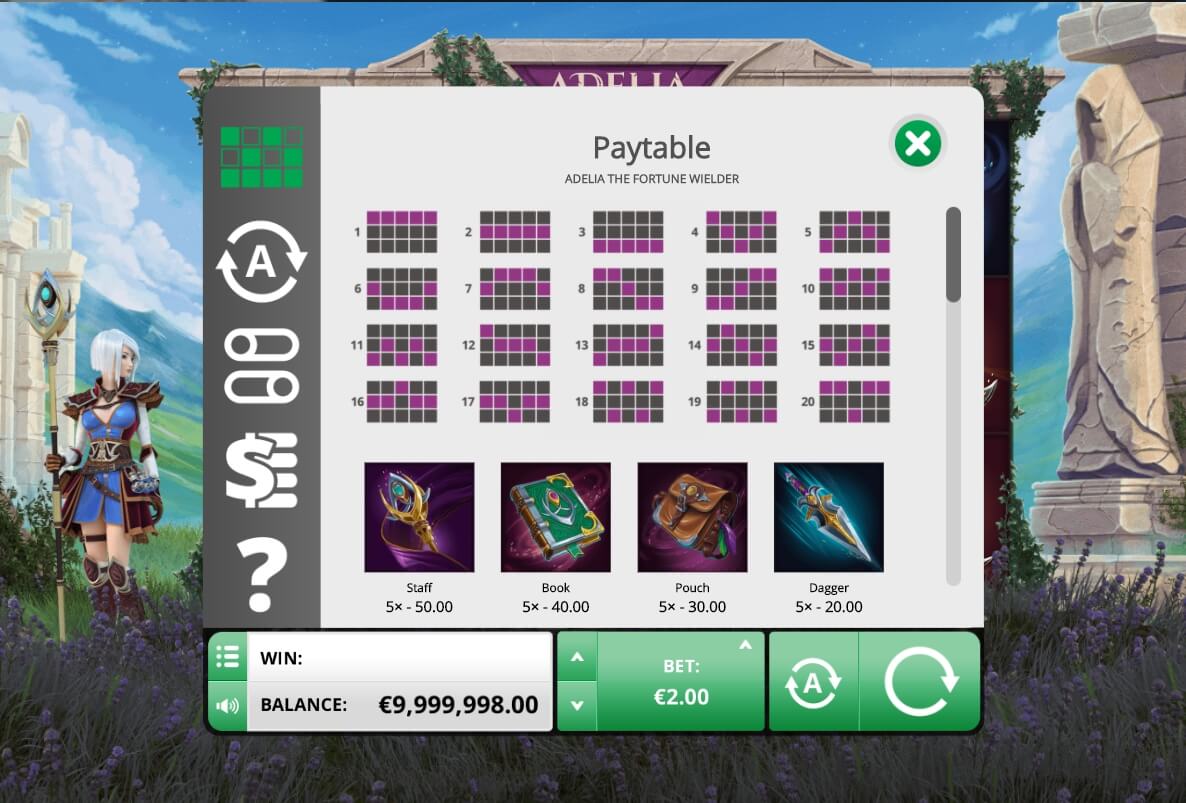 Foxium Software is widely popular on the gambling market as well as they offer only bright and colorful video slot games to the players. Adelia The Fortune Wielder will tell you a story of one elf girl who appeared being a warrior and started fighting to win evil forces and get a reward. From the first glance, this slot machine reminds the Warcraft video game. Light purple effect makes it look really great, while the 3D animation gives you a feeling like you are right in the game while playing it.

Despite the fact, Foxium developers have created a smart video slot machine, players still will feel themselves comfortable spinning reels while playing it. First of all, it is because they will see a traditional interface with three rows in height and five reels on it. Secondly, there are 20 paylines, what makes this slot both comfortable to play and interesting. The maximal reward that gamblers can get while spinning reels with this machine is 50 000 jackpot!

The minimal bet in the game is two cents per one line only. The maximal bet in this slot is twenty coins per one winning line. Gamblers can regulate the bet manually, pressing the “plus” and “minus” buttons that may be found on the bottom of the interface. Turn on the Autoplay option and gamble without stop. There are from 10 and up to 100 automatically turning on rounds available in the game. Choose a needed amount and keep on playing.

This bright video slot game can offer you more than you could ever expect. On the third, the fourth and the fifth reel players will be able to find a wild symbol. It has several features. First of all, the wild one can appear on the interface suddenly and quickly replace all other laying symbols with more profitable ones. Moreover, the wild card in this bright video slot machine can also give the gambler a chance to get from two and up to five free spins activated.

During free spins there is no need to pay for the round, so gamblers can simply spin reels in the game and get real pleasure. However, there can be even more free spins if you are lucky enough to catch the scatter symbol on the interface. Three and more scatters can bring gambler from ten and up to thirty free spinning rounds. As well as, multiplier wilds are also presented in the slot machine, and you also should be attentive not to miss them. They may be found on any reel.

There is the x2 multiplier for three such symbols, the x3 multiplier for four, the x4 multiplier for 5 and the x5 multiplier for six of them. You won’t get bored spinning reels with this bright video slot machine as well as there is also a bonus game available! It can be activated by a special bonus symbol. During the bonus game, players will be able to see three chests and will have to choose between them. Choose the one you like the most and you will get all symbols replaced with more profitable ones.

This video slot machine can be found on the website of any online game portal. You may gamble on real money or play for free on our website. There is no downloading and no registration needed.

Other Games by Foxium