How to Play Baccarat – Ultimate Guide for Beginners 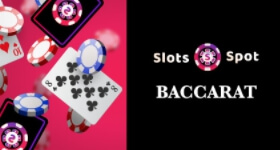 Baccarat is a very popular card game, references to which you may find in many great stories, feature films, and TV series. Even the legendary James Bond just loved to spend his time playing this game. And the great news is that it is very easy to learn how to play it! In this article, we will explain how to play Baccarat. Moreover, we are going to reveal some useful tips and interesting facts about this game.

How to play Baccarat: Step by Step Guide

Baccarat is a card game the goal of which is to score as many points as possible using two or three cards. The game is considered to be one of the oldest card games in the world. The time of Baccarat origin is still disputed, but some sources claim that it dates to the 19th century. Many gamblers are reluctant to go deep into the rules of this game because they think they are too complicated. However, this game is extremely easy to play, being very similar to Blackjack.

The first thing you should know is that it is possible to bet on two hands.

One of them is the Banker's, the other one belongs to the Player. A casino customer can bet using any of them. All the bets should be placed on either Banker or the Player before dealing the cards. 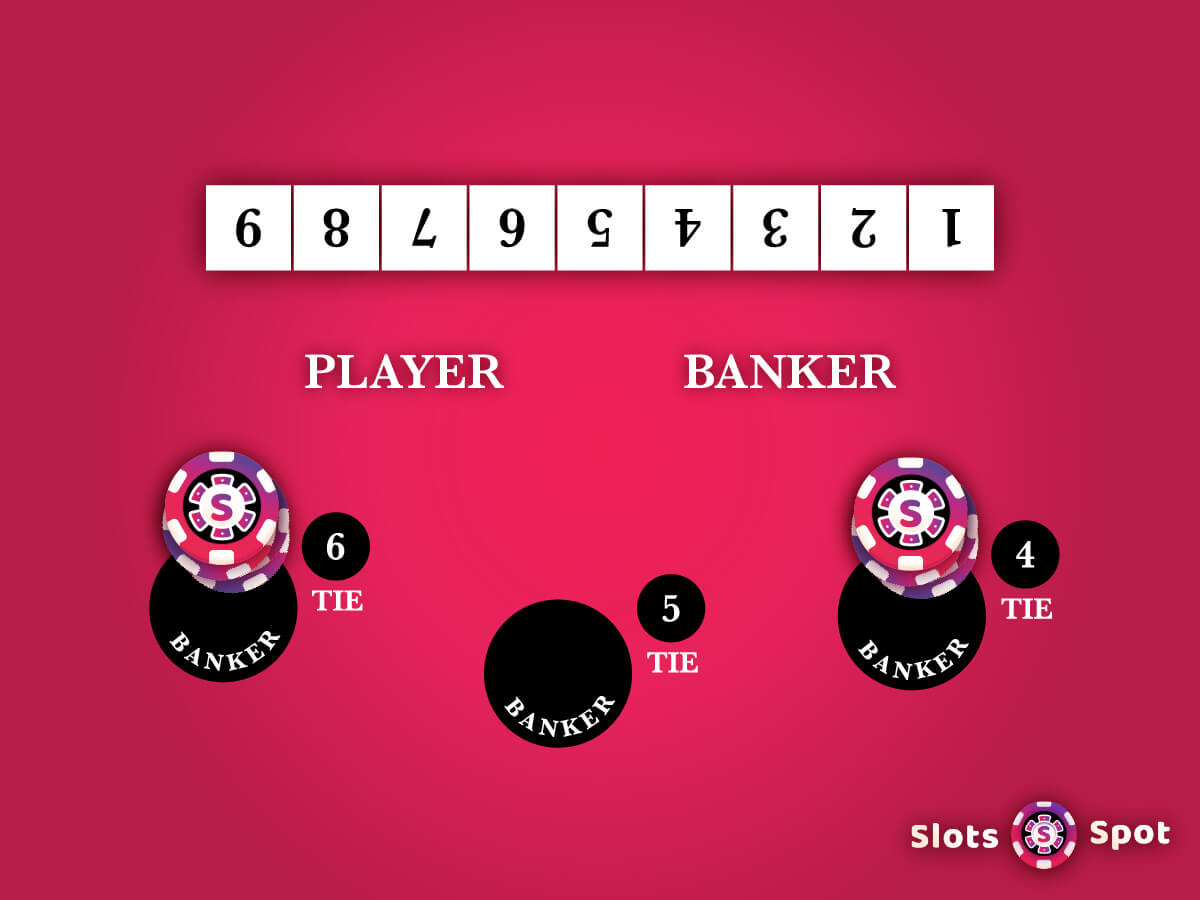 Understand how the cards are dealt. 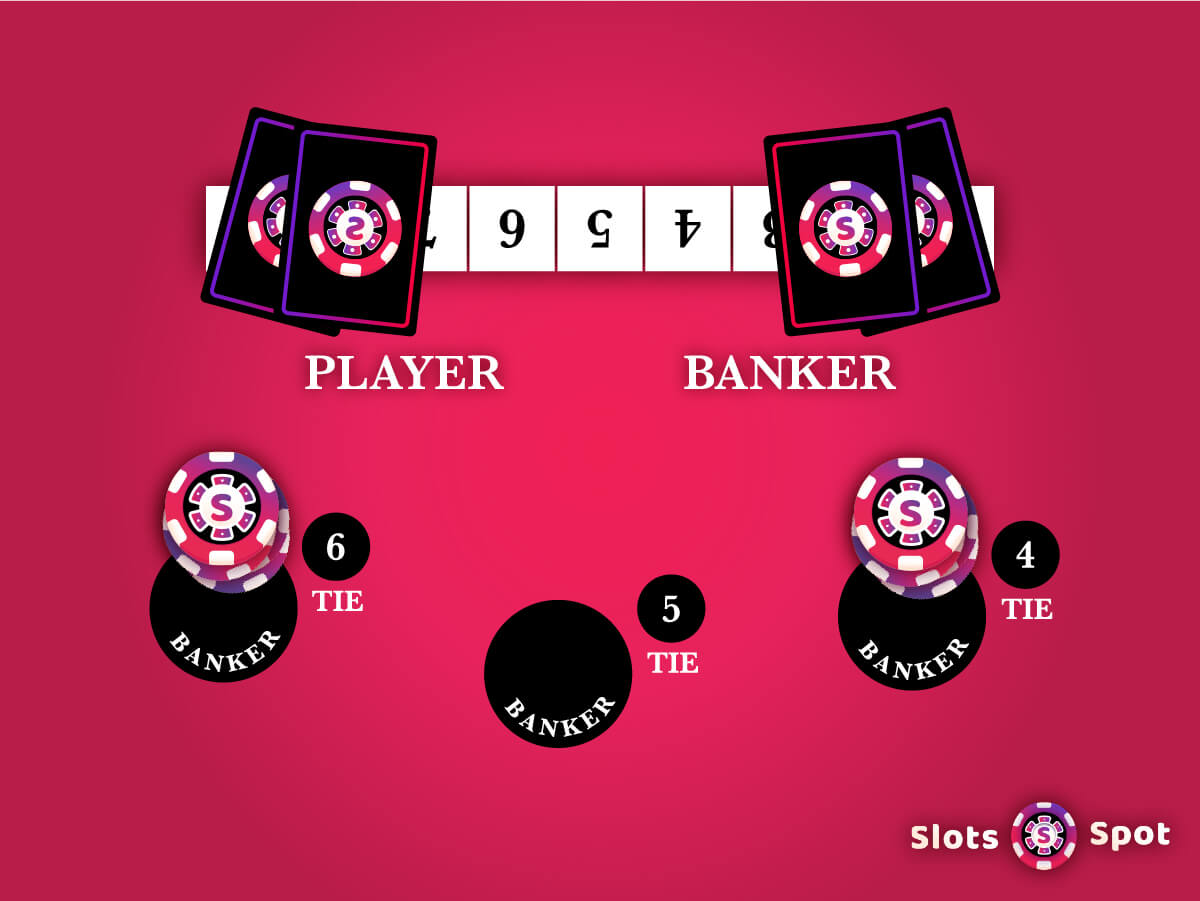 Announcing the total points of both card sets.

Face cards, as well as tens, will give you zero points. As for all the rest of the cards, they worth their actual value. An ace equals one point. In the case of a total of more than 10, the value of the hand should be treated as the second digit. For instance, 9 plus 6 equals 15, which is the total, so it makes up a five-point hand. If you want to win, your bet should be on the hand where the totals are closer to 9. 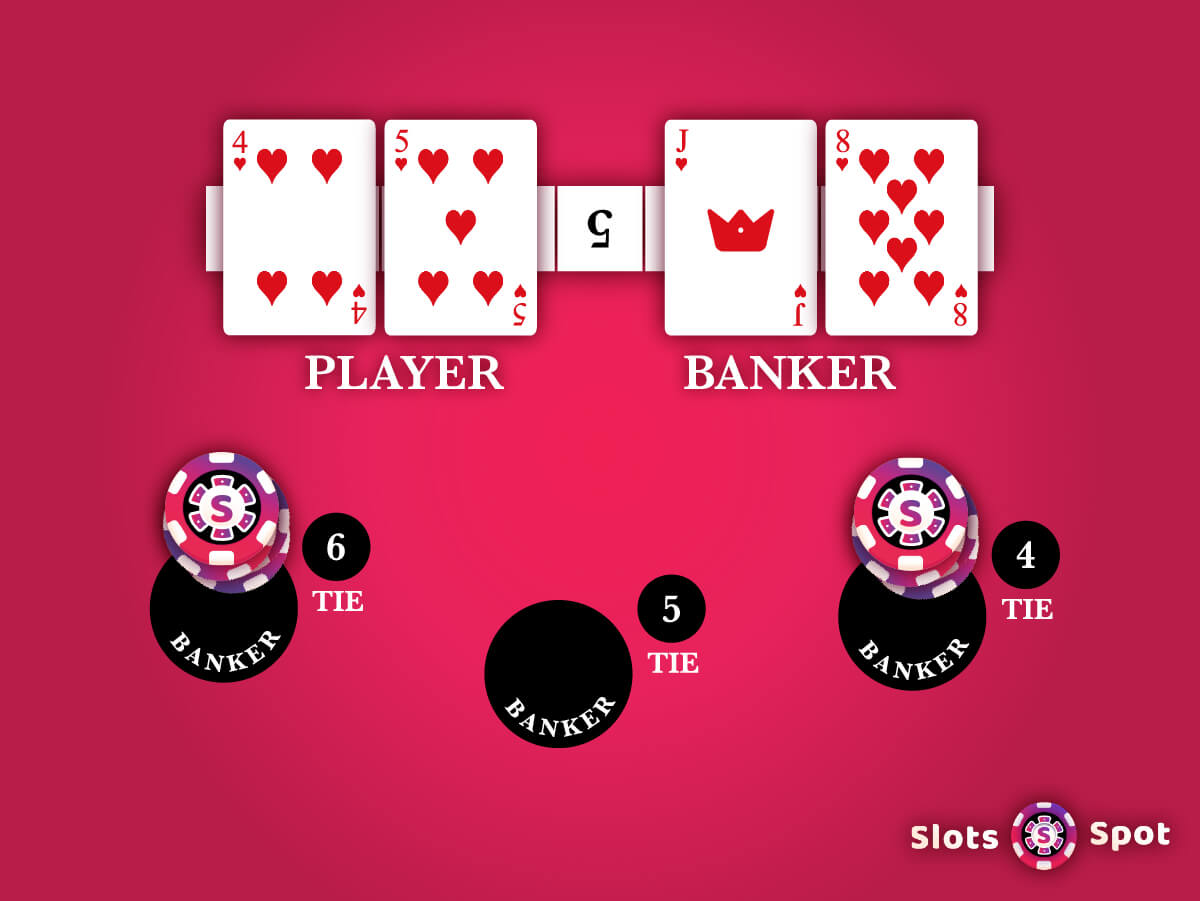 Get the meaning of the "natural" win.

After two first cards have been dealt and the total points equal 9 or 8 either for the Banker or the Player, in the gambling world it is usually called a natural win. In this case, the game is over. Bets are already cashed out and placed. 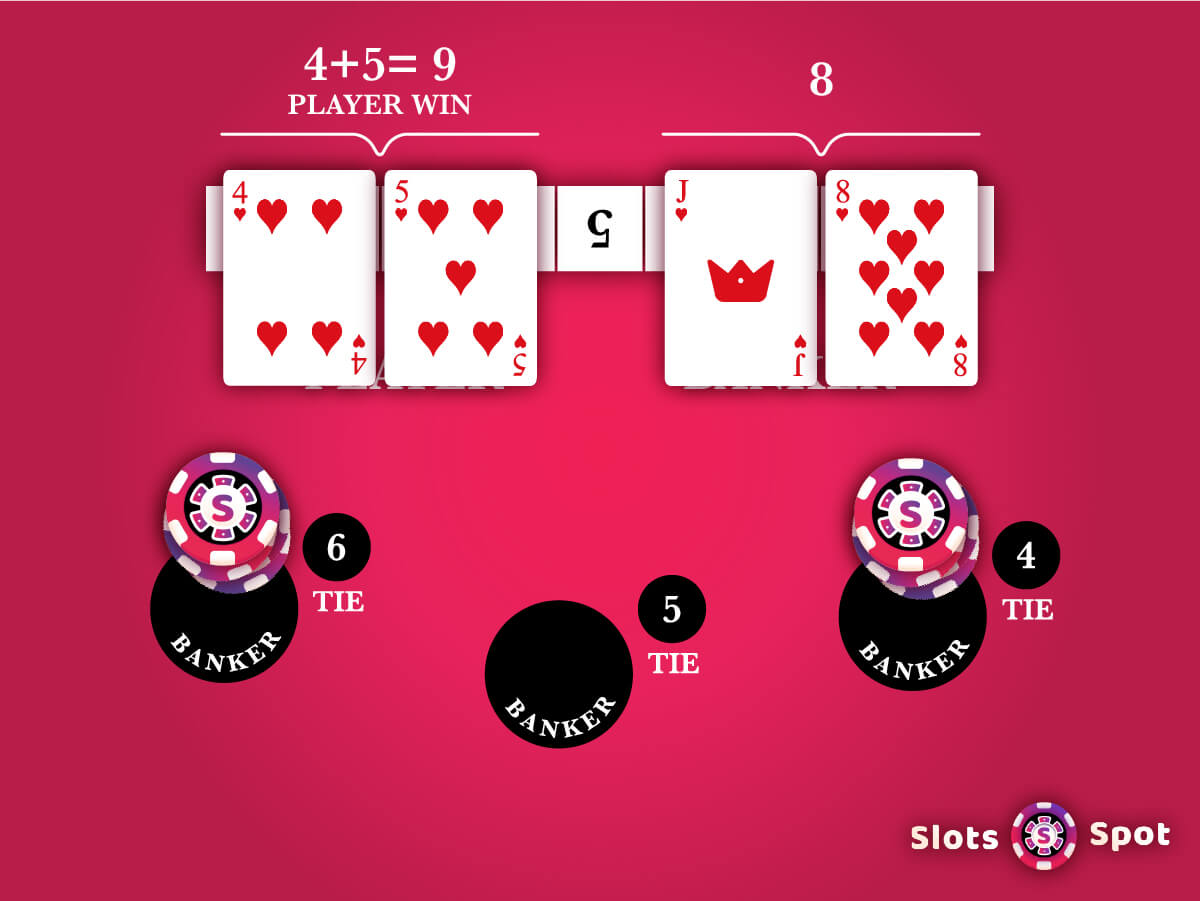 
Understand if you need a third card after estimating the total points.

First of all, the hand of the Player should be completed. If the total is 9 or 8, you do not need any additional cards. The Player stands on totals of 6 or 7. If the total differs (from 0 to 5), a third card is issued to the Player (if only the Banker does not have 9 or 8, because in this case, all the wins go to the winner with no further draw). 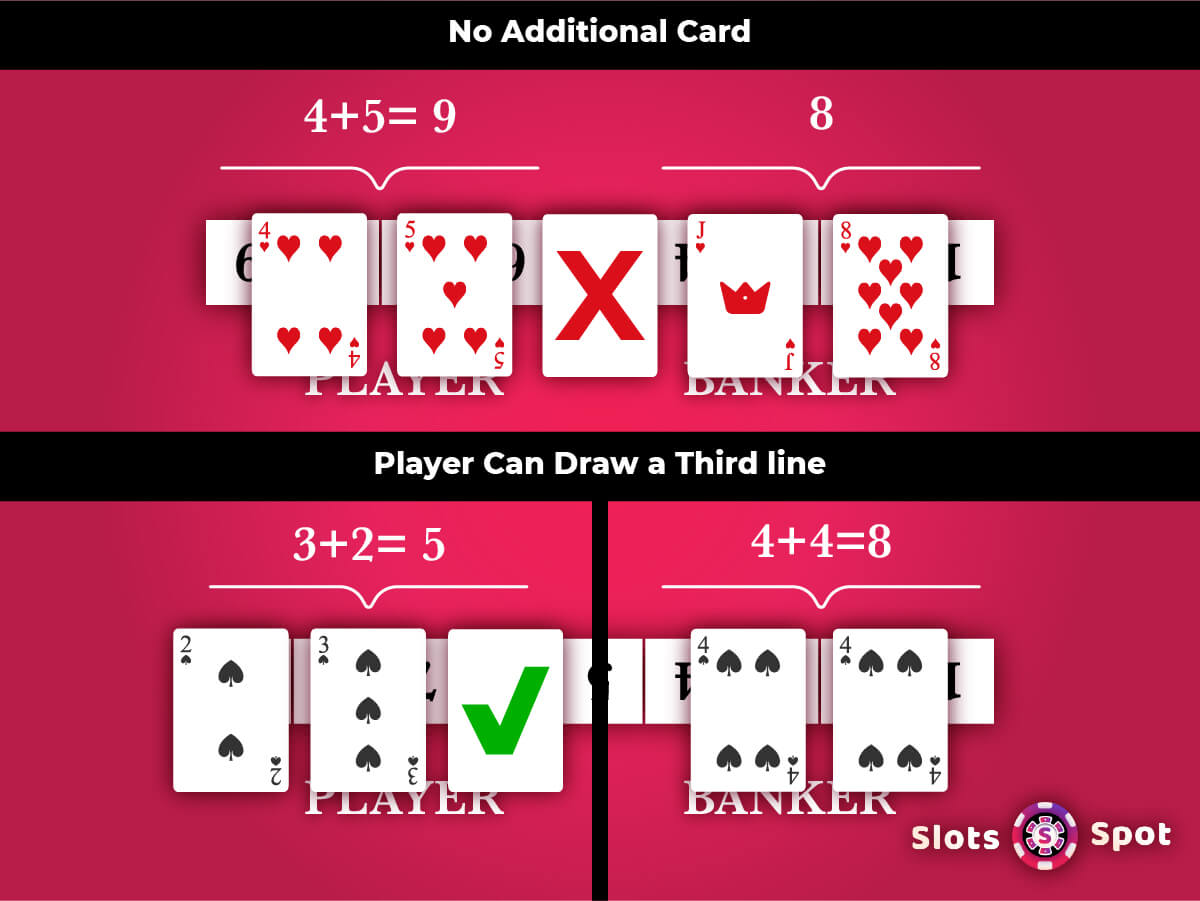 Learn the rules when a third card goes to the Banker.

So, if the Player is standing pat, then the Banker draws with a total from zero to five and is standing pat with a hand total of six or seven. All the other hands completely depend on the third card drawn by the player:

So, if the third Player’s card is either ten or nine, Ace or face-card, the Banker should draw if he has from three to zero, and stay with four, five, six, or seven.

If the Player scores eight, while the Banker scores something from zero to two, he draws and stays with a number from three to seven.

If the Player scores six or seven, the Banker will draw if scores from zero to six and normally stay with a seven.

If the Player has scored four or five, the Banker will draw if his score is from zero to five and will stay if he has six or seven.

If the Player scores two or three, while the Banker has something from zero to four, the Banker will draw. While with five to seven, he will stay. 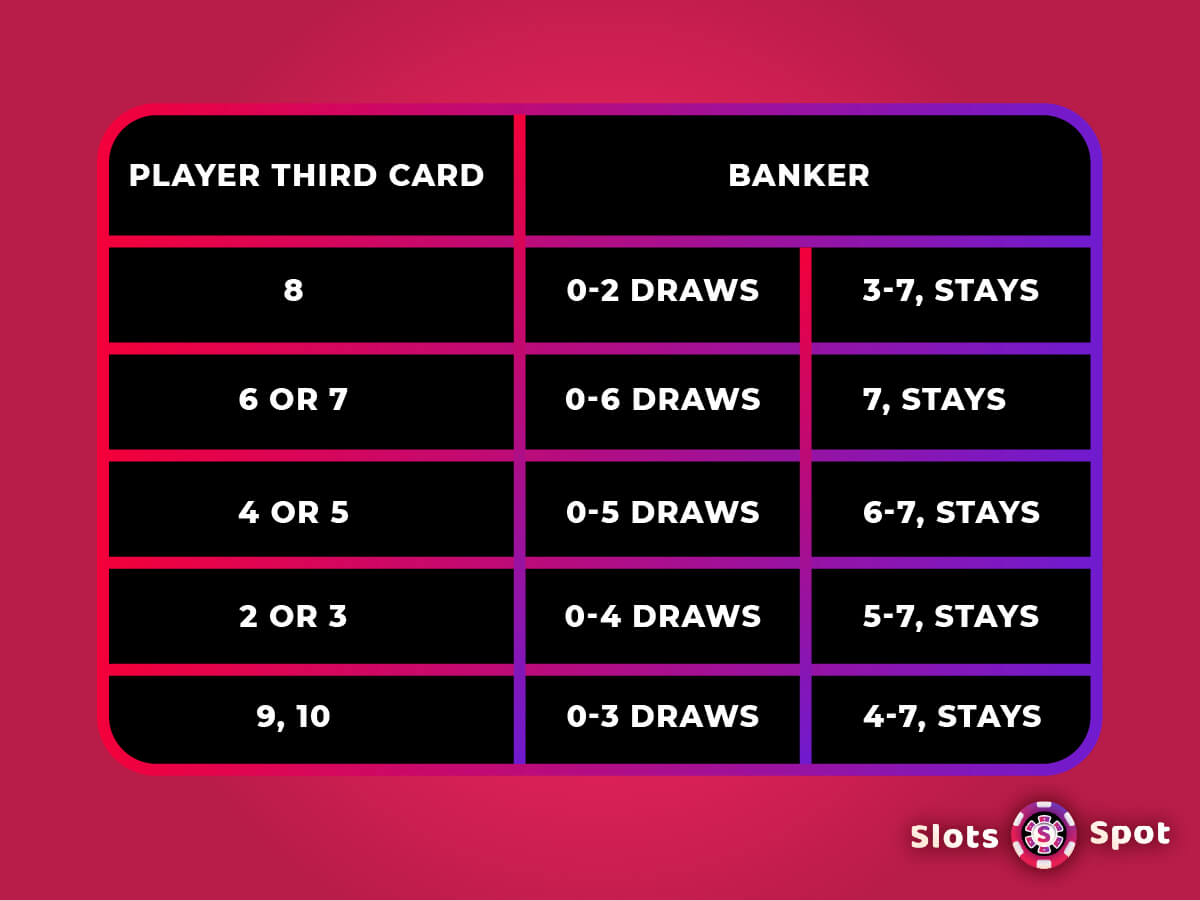 As soon as all the cards have been already dealt the next step will be to estimate the winning hand.

The winner is the one who has the totals that are the closest to 9. If there is a tie, nobody is a winner or a loser. Also, sometimes there is a commission out of winnings in case of betting on the Banker's hand. 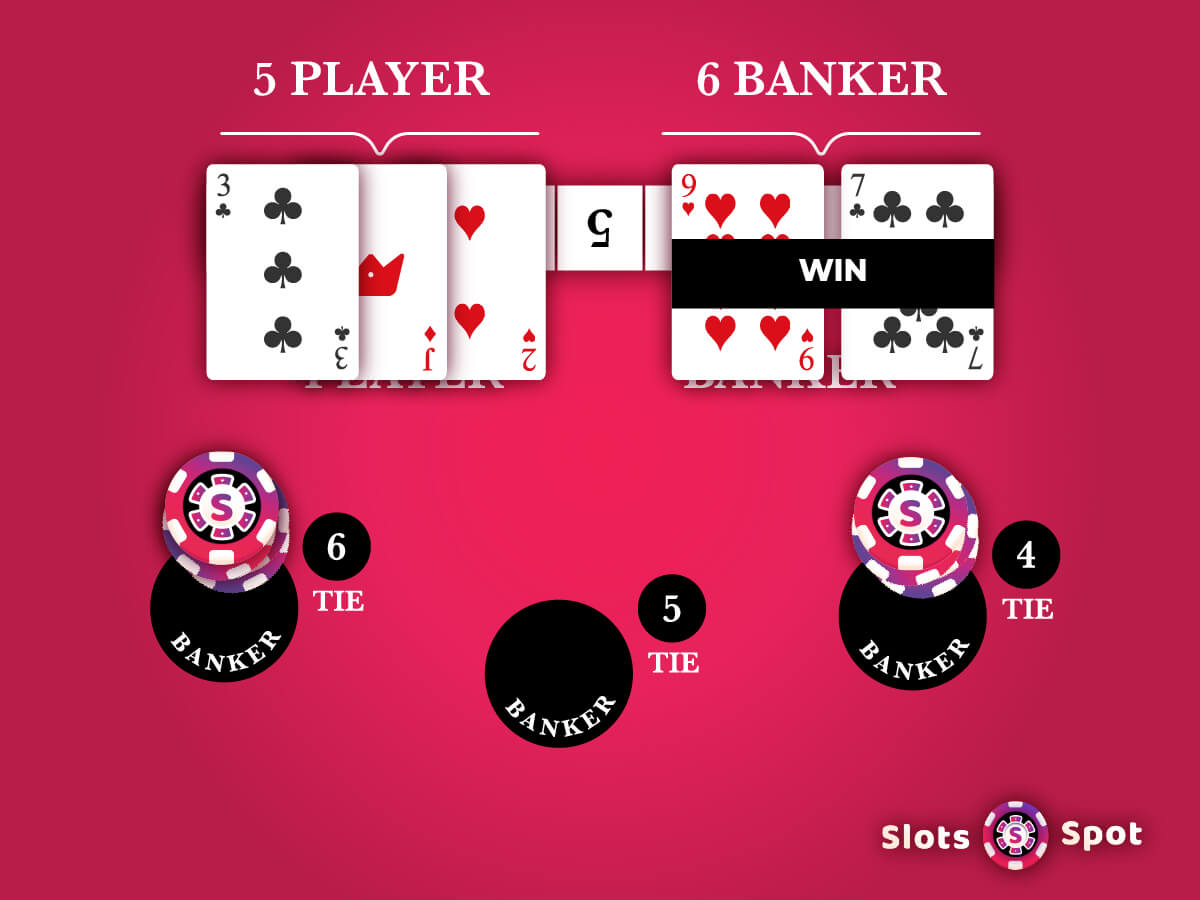 1. Play only for "extra" money

One important thing you'd better do is to come up with the sum of money you may afford yourself spending on the game. You should never exceed that amount. Never bet the money you may need later for purposes like paying for your apartment, food, and so on. If you have decided to visit a casino, we recommend you to take only the money you are planning to gamble, so you will not be tempted to spend more than you can afford.

2. Do not trust winning strategies

It is easy to find a huge number of strategies that promise huge winnings if you use them. But be attentive and remember that Baccarat, as well as many other online slots, is based primarily on your fortune, but not your skills. So no strategy can help you to win, so you'd better not spend extra money on these useless strategies.

The bet on Player is the best betting option in Baccarat. If you win, the payouts will be 1:1, so you will not be obliged to pay any additional fees, like commission and so on. For Banker, the commission is usually 5%.

Some statistics illustrate your small winning chances if you bet on Tie. Such wins are extremely rare. Also, if you win betting on a tie, the casino commission is going to be huge, about 14,4%. So, think over carefully before choosing this option.

5. Play with fewer decks of cards

Be ready to memorize the rules perfectly before deciding to visit the casino and make your first bet. Another good idea is to practice this game to digest its basic principles. Usually, it is possible to try your hand in any online casino of your choice, as all of those platforms offer just two types of Baccarat to gamblers: a free game and a game for real money.

7. Do not try to chase losses

If you have lost your money, do not try to chase losses. You'd better stop playing, because if you don’t, you may lose all the money you have. Don't be upset if you turned out to be out of luck today, as you may return to a casino whenever you wish and try your luck again and again till you win.