You can not play this game for free
For free slots game go
Play free
or
(12 votes)
Game Played: 3
Full screen: close 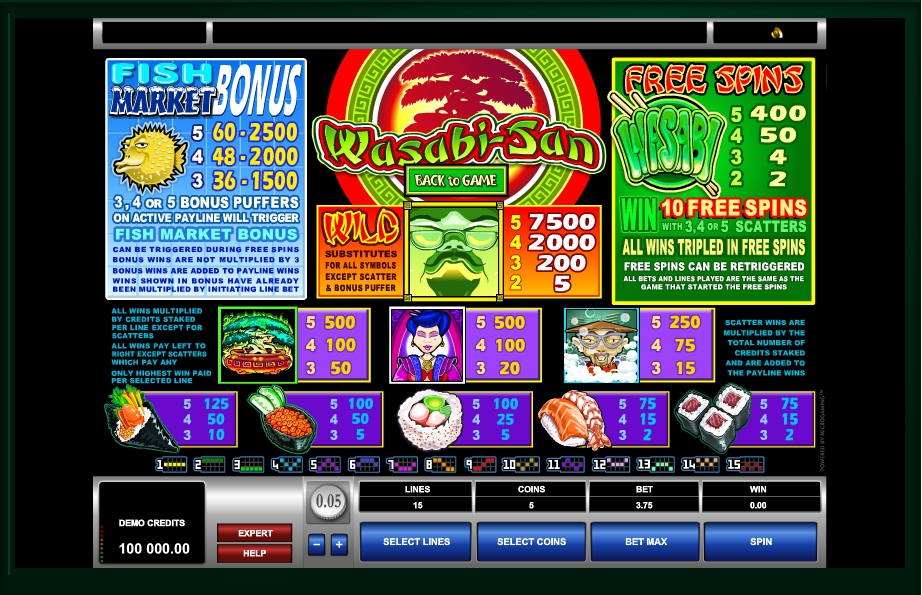 The Wasabi-San online video slot is another creation of the Microgaming software developer. It is a 5-reel video slot with 15 pay-lines. The Wasabi is a Japanese delicacy, a little chilly but still quite different. The Wasabi-San online slot game brings to life the Japanese culinary skills. The graphics, sound, and design make it one of the best online slots. The game has nice symbols like the sushi, wasabi chef, a Bonsai tree and different fish logo. These symbols make the game superb and help you evaluate your time.

There are five different sushi symbols, a composed female and a man in a hat with a funny tooth. There is also the Bonsai tree, a sushi chef, a fish and the green wasabi sign. This slot game has an Eastern-themed soundtrack also pointing to the Japanese culture. The Wasabi dish is expensive because it is quite difficult to create. Hence, players receive compensation proportionate to the effort.

The Wasabi-San slot game has some special features that make the gameplay worthwhile. These features include wilds, free spins, the fish market bonus and the scatter. Moreover, they reward the players with various prizes. Like every online slot game from the Microgaming, one can always give the game a try regardless of the conditions. There is always the free play option. The pay lines provide each player with enough options to place their bets. The smallest bet per spin is 1 and the largest stands at 75 credits. However, not all online slot plays allow up to the 75 credits.

The return to player (RTP) for the Wasabi-san is a whopping 96,56%! This RTP is high enough for games of its status!

The Wild
The wild is the sushi chef symbol and it can substitute other symbols to complete a winning combination. The only symbol the wild does not replace is the scatter. Also, the game allows players to collect winning combinations of the wild. Collecting five wilds in a row activates the jackpot with the x7500 multiplier! While four wilds and three wilds give x2000 and x200 respectively.