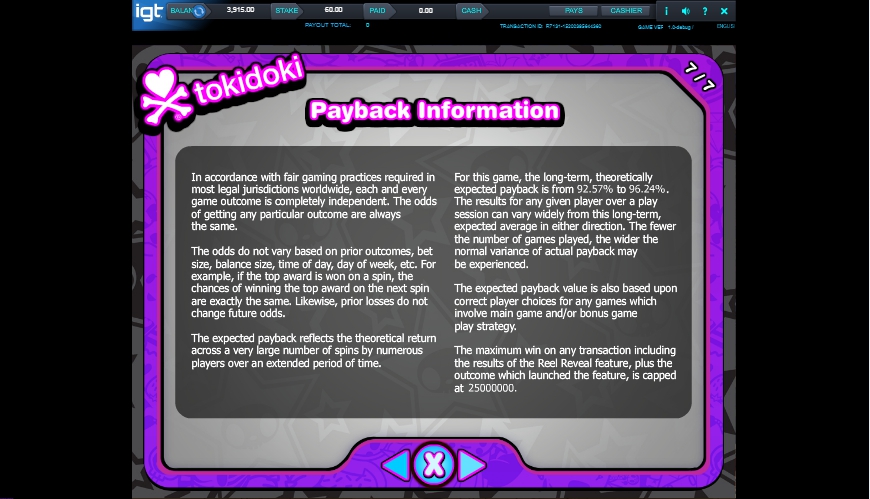 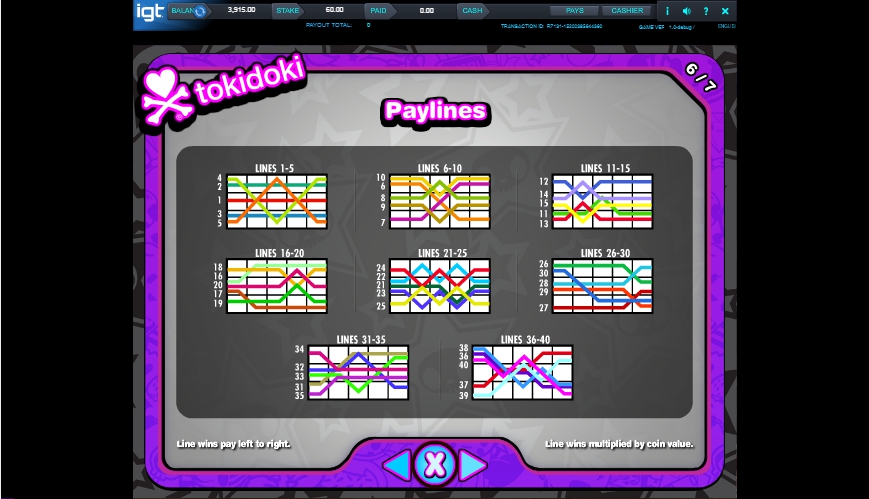 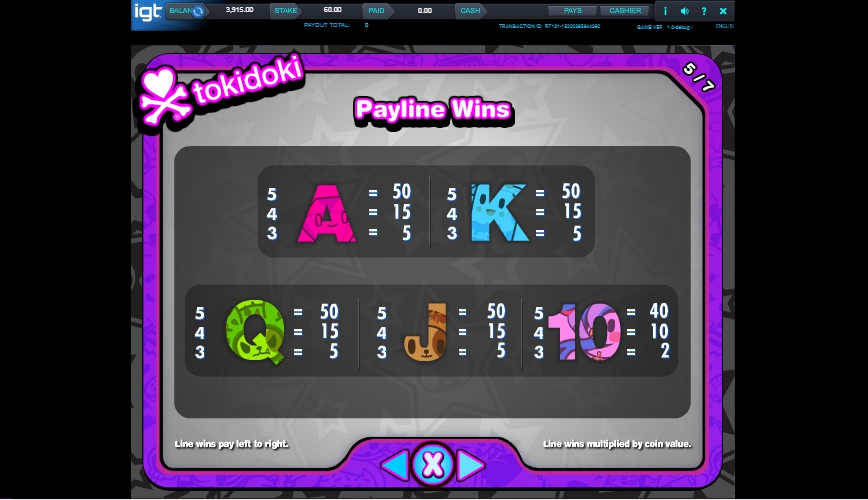 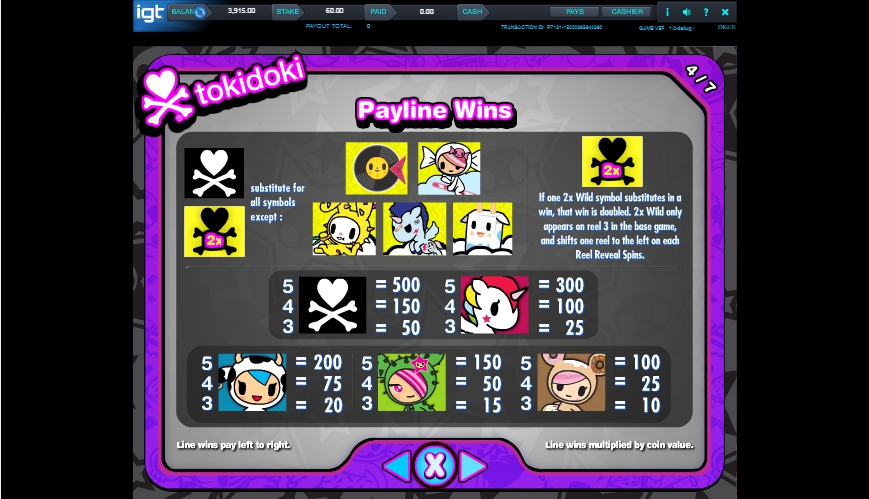 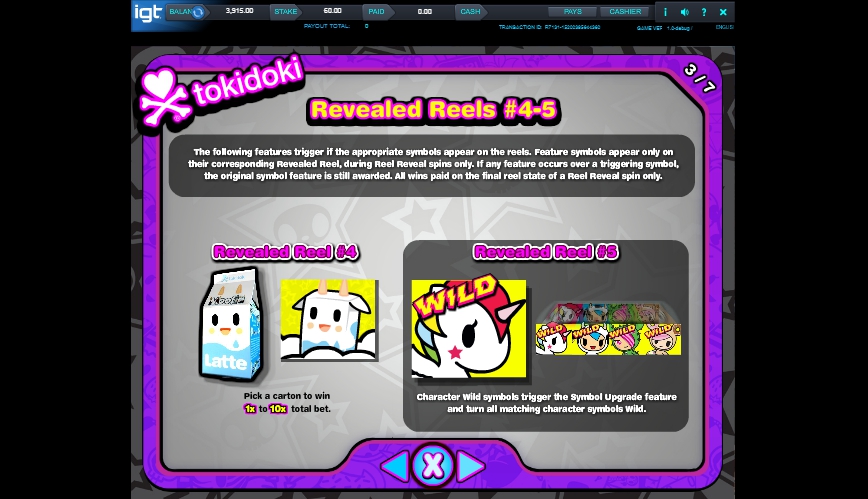 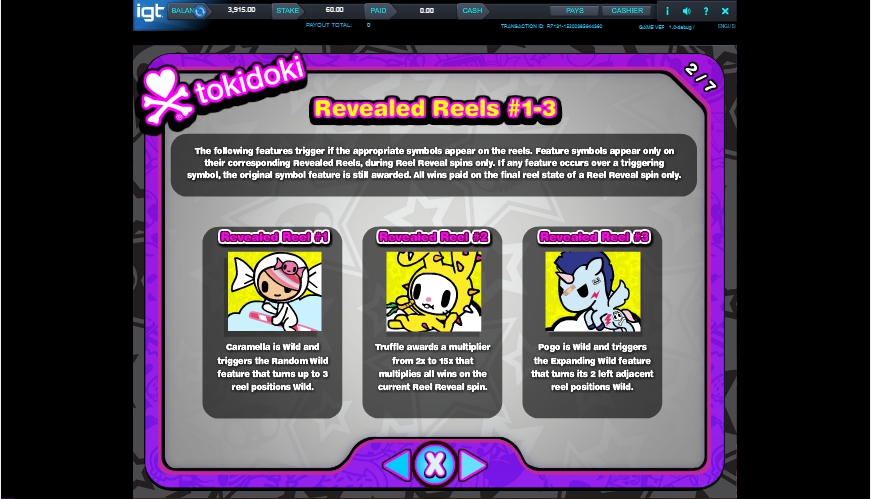 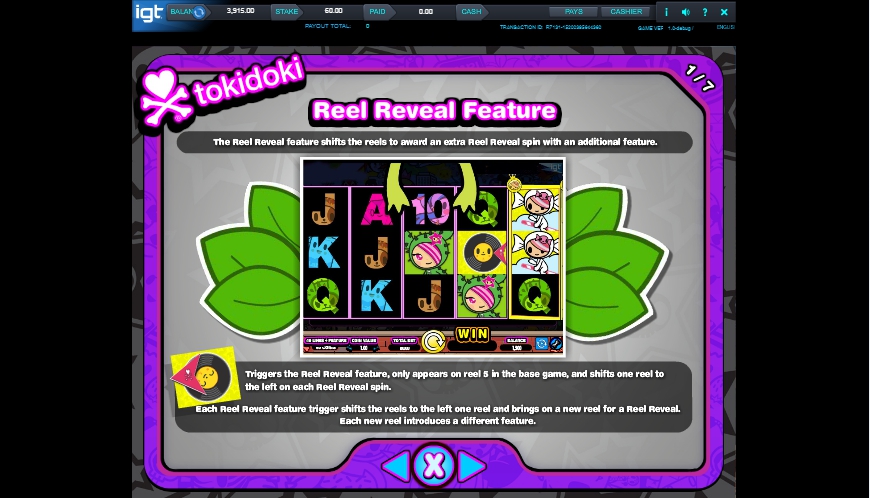 Perhaps, the name of the game sounds fancifully as for the video slot, but everything will become clear when you begin to spin the slot machine reels. Actually the new creation of the IGT company is devoted to the Japanese subject. The Tokidoki Lucky Town Slot will please you not only with bright colors, but also with remarkable gambling with various bonuses.

The interface of the slot machine is rather simple and convenient. It is not overloaded with a lot of useless information and buttons. Under reels, there is a control bar on which your current balance, the bet size per line and the general bet, as well as your benefit for the last round are displayed. All remaining is placed in the information menu. The slot of Tokidoki Lucky Town consists of five reels on which 15 symbols at the same time appear. Using them, you also should collect prize-winning combinations on 40 lines of payments to receive a prize. The range of rates is quite wide that considerably expands the game opportunities. So the minimum rate on a round will cost you 60 cents and if you want to play to the maximum, then be ready to bet up to $600. If it is possible to regulate the bet size, then the number of active lines is fixed and it is impossible to change them. As the producer of the slot states, the percent of payments makes 96,5% that is a very good indicator.

The formation of prizes happens in the traditional way. For this purpose, you need to collect a chain of identical symbols by length, starting from the left reel. If several prizes turn out in one round at once, then they are summarized.

The minimum size of a multiplier is x2, the maximum size reaches x500. Among other things, we will allocate the possibility of the autogame, a demo mode, the existence of special symbols and bonus options. A progressive jackpot and a risk game are absent.

Considering the Japanese component of the slot of Tokidoki Lucky Town, it is no wonder that all basic symbols (all characters of Tokidoki), anyway, represent eastern motives.

They give high payments from 100 to 200 credits for a chain of five pieces, and card signs and alphabetic symbols are submitted with low multipliers. And here, if to have the luck to collect enough images of a heart with bones, then the balance will be increased with 500 credits.

Now it is a high time to tell also about special elements of the slot:
– Wild (crossed bones with a heart) performs a usual function of the replacement of symbols for receiving advantageous combinations and as it has been told above, brings a prize.
– 2 wild (the similar sign of yellow color with figure two). Its emergence is possible only on one average reel. It does not give payments, but in case of a prize-winning chain doubles the coefficient.
– Bonus (image of a vinyl record). This sign starts a bonus game if on the fifth reel.

The bonus game represents a series of Reel Reveal free spins, during which there is an offset of extreme columns on one step to the left side. The additional opportunities given by means of this round are activated by a specific character. For example, if the Caramella sign falls out, then it will launch random Wild in number of three wild images.

And here “Truffle” will increase the current scoring from x2 to x15. The appearance of the Unicorn will expand Wild on two left reels completely having filled them with itself. In the case if boxes appear, it is necessary to make a choice.

After that you learn what size of a scoring will be received. Its maximum size will be increased up to 10 times. And, at last, the Symbol Upgrade function will help to turn many characters into Wild, having brought thereby just magnificent prizes.