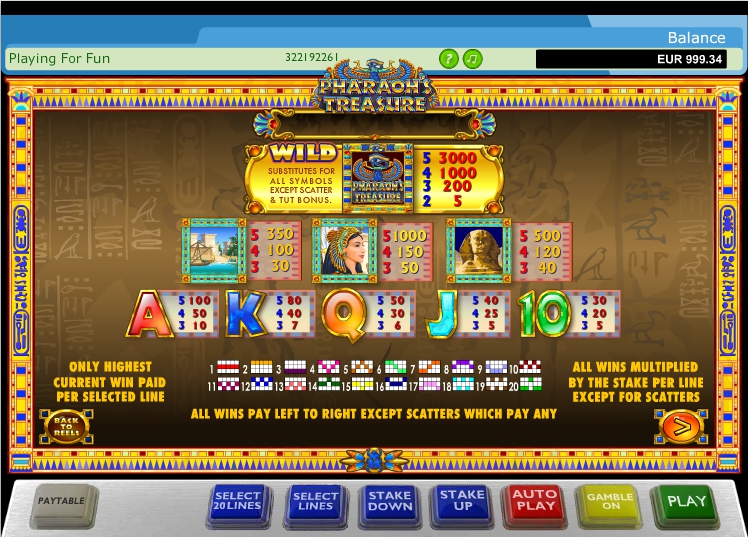 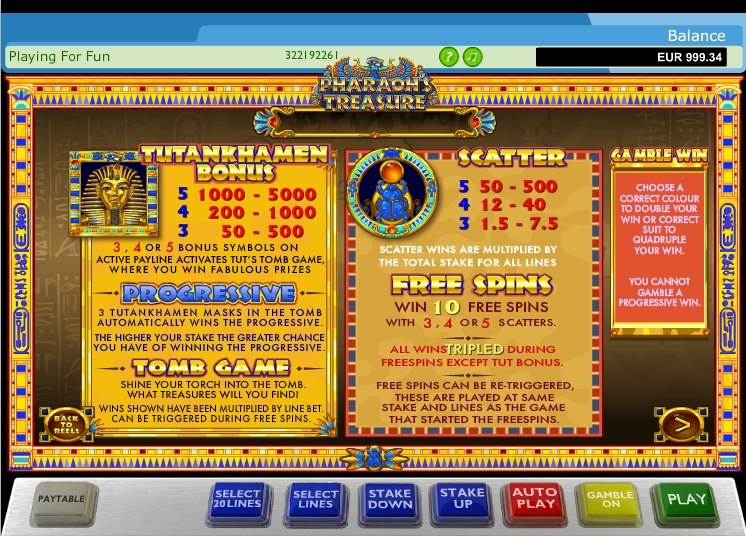 The incalculable wealth of the pharaohs, according to the behests of the priests, must necessarily go with them to the afterlife, so that the descendants of the gods should feel well there. This important detail of the grave has burdened the minds of more than one generation of Egyptologist researchers, and of course, left a mark on modern culture and art. Therefore, it is not surprising that even slot machine manufacturers are now exploiting this subject, releasing more and more slots about the wealth of Egyptian rulers.
One of the slot machines that should definitely be checked out is the colorful and bright video slot Pharaohs treasure. It was created by the company B3W Group, and today it is one of the most popular slot machines in the topic.
How to play the Pharaohs Treasure slot to get the maximum win, we’ll tell in this review.

The playing field of the slot is very colorful. The background is the image of an ancient city with a massive statue of the pharaoh. On the screen are 5 game reels, made in the form of clay tablets for writing. And the control buttons of the slot are successfully stylized to the stone slabs.

Game characters exactly match the subject of the Pharaohs Treasure video slot. Here you will find a golden pharaoh mask, a portrait of his wife, a symbol of the scarab, icons with images of totemic animals and priests.
There are also standard card symbols in the game, which have a small percentage of winning multiplication, but quite often they form winning lines.
The slot has a set of characteristics typical for this manufacturer’s automata: 5 reels, 20 active lines, range of rates from 1 to 10 coins per line. Game control is extremely simple: set the denomination of coins with arrows, choose the number of lines and the number of coins for each and start the reels.
The jackpot in the game is 3000 credits.
If you want to become more acquainted with the interface of the slot machine, you can play Pharaohs Treasure in free demo mode in any of the modern virtual casinos.

Special symbols in the Pharaohs Treasure slot are also there, and their properties significantly affect the size of your winnings.
The wild symbol is the Tutankhamen’s mask. It appears on any drum, replaces the missing symbols and can form a winning line. If you collect 5 Masks on an active line – the jackpot is yours.
A golden scarab is a scatter with the function of launching a bonus game. If you collect a line of 3 or more scarabs, you will get to the bonus level, where you will be offered to choose a burning torch, and then a hieroglyph that will open the entrance to the tomb of pharaoh. After successfully passing the level you will get several spins with coefficients x6, which will significantly increase your profit.

Despite the seeming simplicity, the company Amaya was able to create a traditional slot, which has its own twists. Noble oriental design, unpredictable gameplay, and vivid graphics make Pharaohs Treasure video slot one of the most popular five-reel slots of today.

The War of The Worlds