You can not play this game for free
For free slots game go
Play free
or
(12 votes)
Game Played: 13
Full screen: close 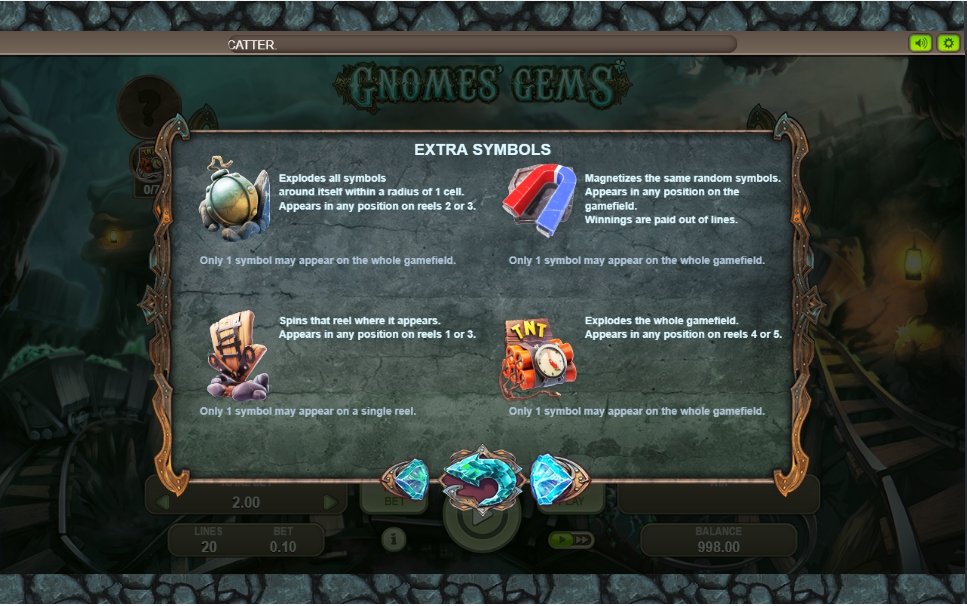 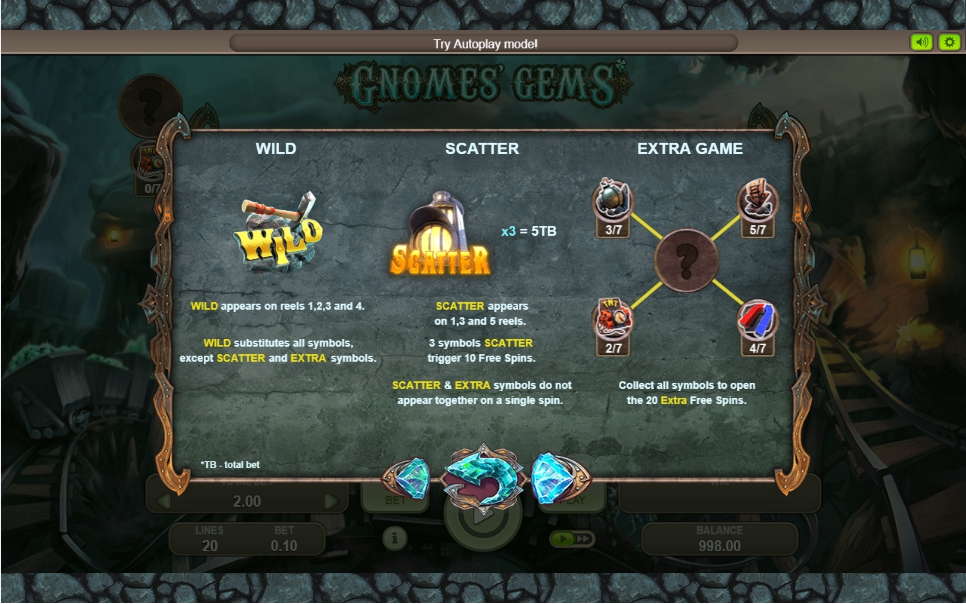 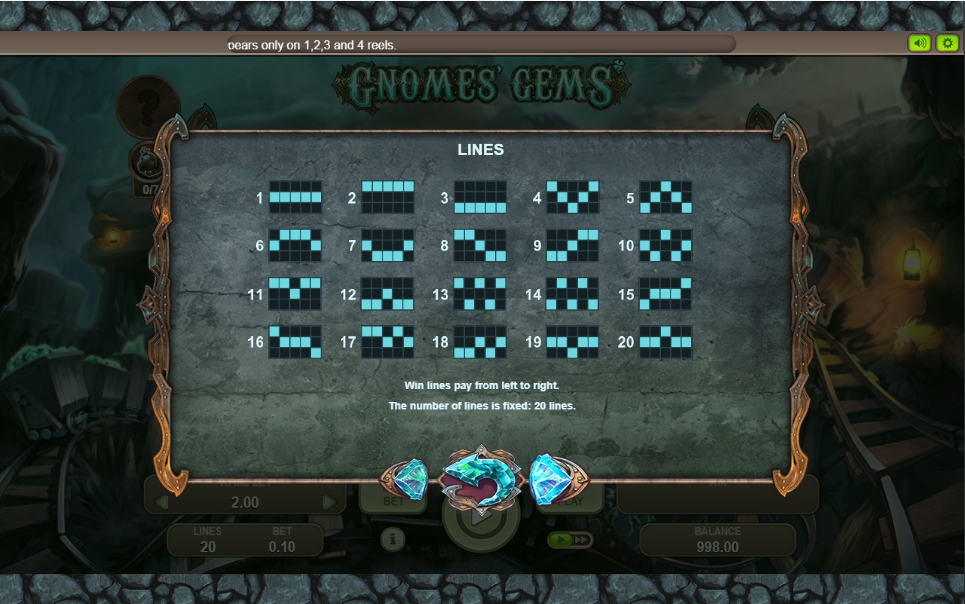 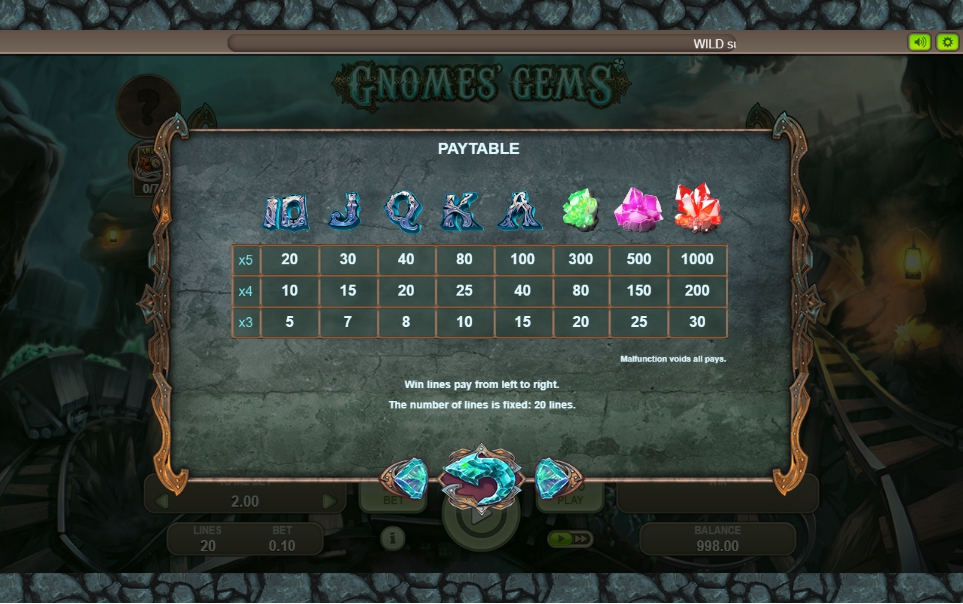 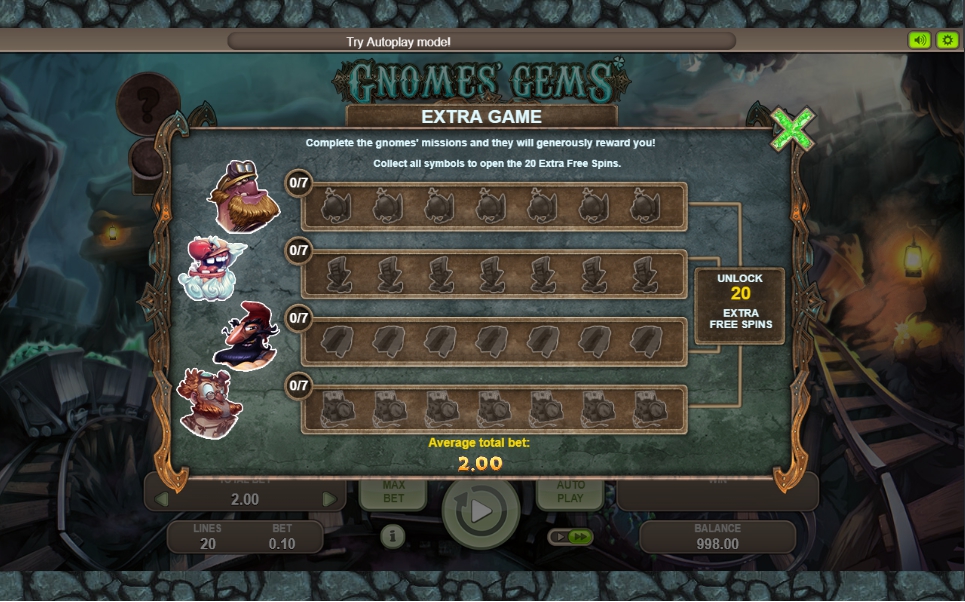 Gnomes are known for their love towards gems, in the gust of which they create whole cities underground with a complex system of tunnels and mines. It is about one of these cities the story is told in the Gnome’s Gems slot machine from the company Booongo Gaming – a model with five game reels, excellent design, and generous payments. You can see for yourself when you start playing the Gnome’s Gems for real money in any of the partner casinos of the manufacturer. Well, or just study this review and have a great time playing the slot in the trial mode first.

The game screen of Gnome’s Gems casino game is made in the form of one of the underground gnome-mines, in which gold and crystals are mined. Despite the dark tones, the design is not scary and is cozier. Against the background of the mine, there are standard game reels.

They are here invisible, that is, you will not see borders, but the overall outline is made in the form of a patterned frame. Under the reels is an interactive table of winning combinations, as well as the already familiar to every gambler buttons control the gaming machine:

Like all slot machines from the Booongo Gaming, the Gnome’s Gems slot has 5 game reels and 20 active lines. On each of them, you can put from 1 to 5 coins. The wager is fixed, but the range of available denominations of coins is quite impressive – from 1 cent to 5 dollars. The slot machine also offers players to compete for a nice jackpot of 1000 game rates, and the chances of getting it are quite high because the slot’s payback ratio is 97.1%!

Game symbols of the slot are also perfectly worked out. In addition to the standard card symbols, carved from stone, you will find shining crystals and gems, as well as tools for excavation in the mine: a flashlight, a shovel, and a pickaxe. Also in the Gnome’s Gems video slot there are also special characters that affect the gameplay:

But one of the slot’s most intriguing features is Extra characters that can significantly help the player. There are four:

The Booongo Gaming always competently approaches the release of each of its slots, and the Gnome’s Gems is no exception. Here you will see a well-worked out plot, appropriate design and sound effects, as well as the availability of pleasant bonus options and a good main prize, which is worth fighting for. The slot will definitely appeal to experienced gamblers, and if you are a newbie, then you can play Gnome’s Gems in demo mode in any casino that is licensed by the Booongo.

Other Games by Booongo Gaming

Goddess Of The Moon