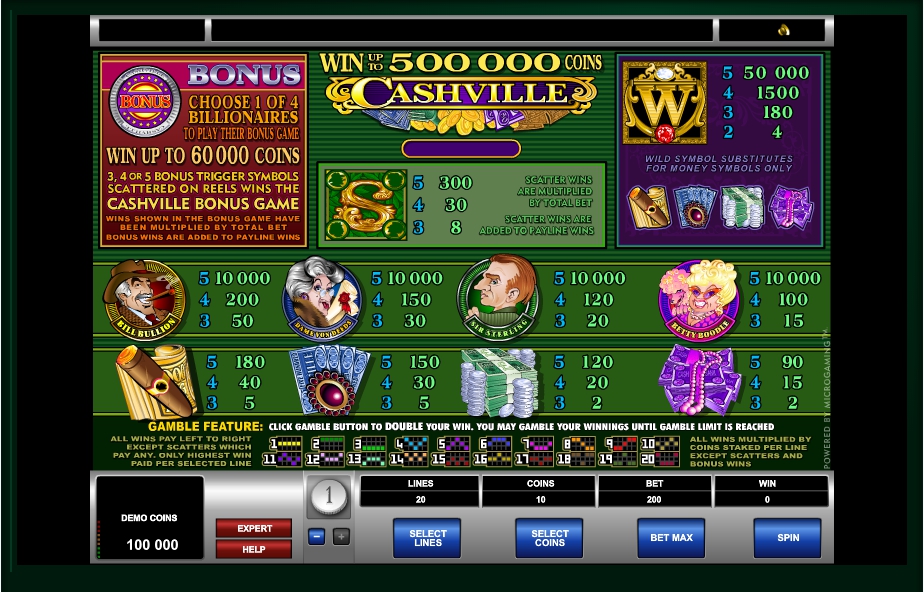 We want to present you, dear player, Microgaming`s golden video slot, after opening which you will feel the atmosphere of Cashville – a town far from Las Vegas where everyone tries to earn easy money and becomes mad hearing the word ”gold”. The online slot has the same title as the town.

5 light-beige almost white reels are placed on a golden background and divided with golden frames. The different coloured points of paylines (here are 20) are close to the outer sides of the frame. The field around the playing zone is green having light-green lines. Under the tremendous title Cashville that is placed immediately below the reels, there is a multifunctional flash coloured panel with scarlet and sky-blue buttons. Click on them to regulate the slot game’s parameters. ”+” (increase) and ”-” (decrease) of the ”Bet” set exactly that wager amount, which you will choose from 0.010 to 0.20 coins.

”Max Bet” sets the maximum bet. ”Select Lines” helps to set the amount of paylines. (Keep in mind: you always have a right to use a magic autoplay-option.) The symbols seemed to be an exhibition of contemporary art that is called like ”Madness of Cashville or Thirst for Money”.

There are four portraits of charismatic citizens of the famous town: a white-heared man wearing a brown hat, a retro suit, a ruby tie (William ”Big Bill” Bullion is smoking a cigar.); a silver-haired old woman with a horrible makeup wears a brown fur-coat (Grosselinda von Deeds is holding a document with a blood-red seal.); a terracotta-haired man with a large nose, greedy blue eyes and angry lips (Brendon Stirling always wears his bluish suit and does not like to talk much.) and a fair-haired not so young woman-holiday is wearing super-luxury glasses and a lilac-purple dress (Elizabeth ”Pinky Betty” Boodle hold in her hands a rosy not less pathetic poodle.).

Bonus rounds can make you mad

A luxury picture framed with the golden border of the astonished golden ”W” with fantastic ornaments, a large bloody gemstone is underneath it and a white diamond over is ”WILD”. Except substituting all symbols, it can create a lucky combination!

Not less luxury one is an image of the ornamented golden ”S” that is placed against fresh-green mint leaves, being decorated in the corners with the small silhouettes of William Bullion, Grosselinda von Deeds, Brendon Stirling and Elizabeth Boodle.

Cashville Bonus Game can be played only after you gain 3+ silver coins with a bright-violet inner circle with many tiny yellow icons of ”stars” and a large red-yellow ”BONUS”. Here is ”Gamble Feature” as well.

The end of the Cashville Slot’s review

We are asking you to postpone any downloads and registrations! Here are no such stupid limits!

Stocks and a lilac brooch

Stacks of banknotes and coins