You can not play this game for free
For free slots game go
Play free
or
(7 votes)
Game Played: 279
Full screen: close 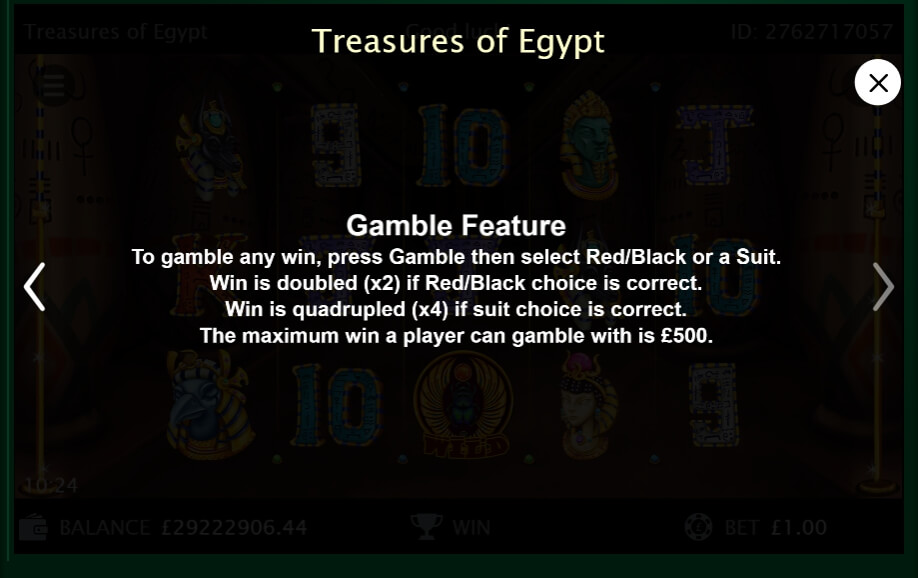 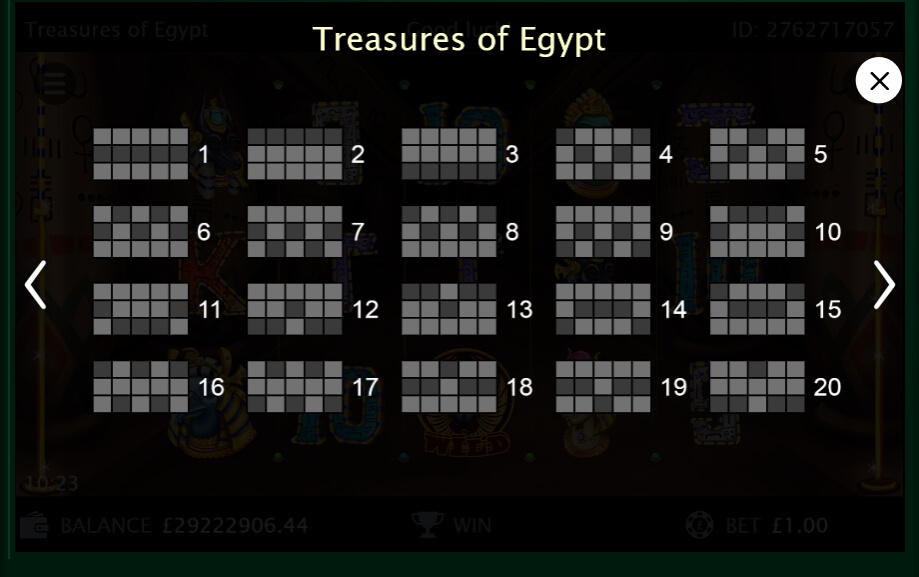 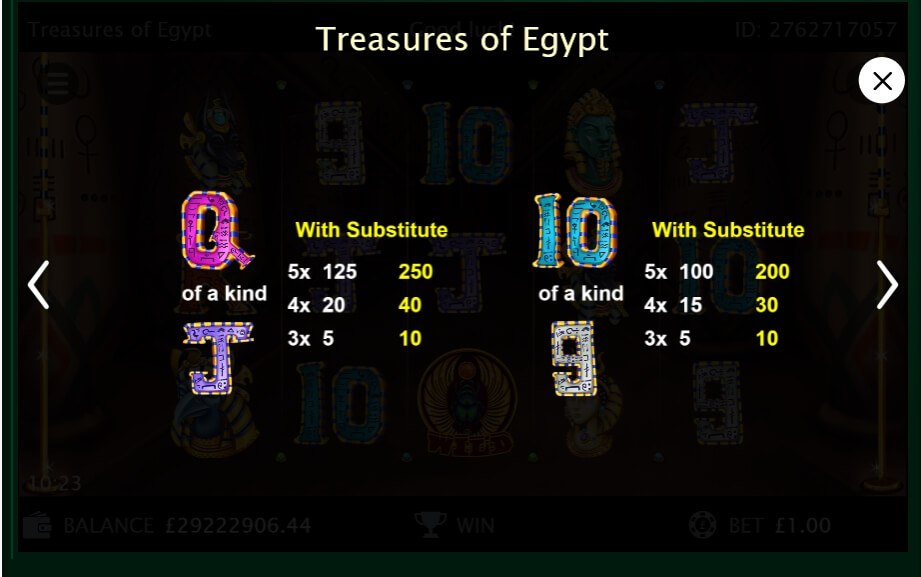 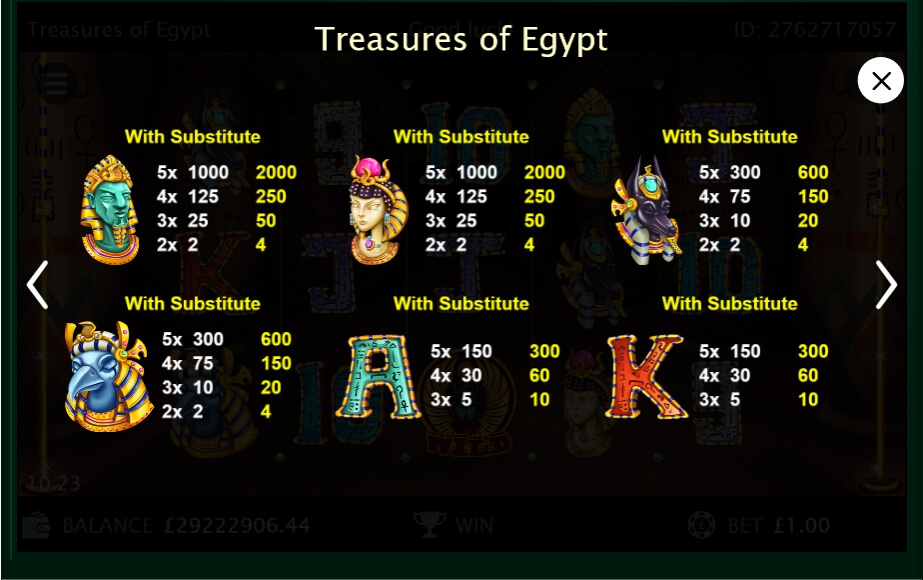 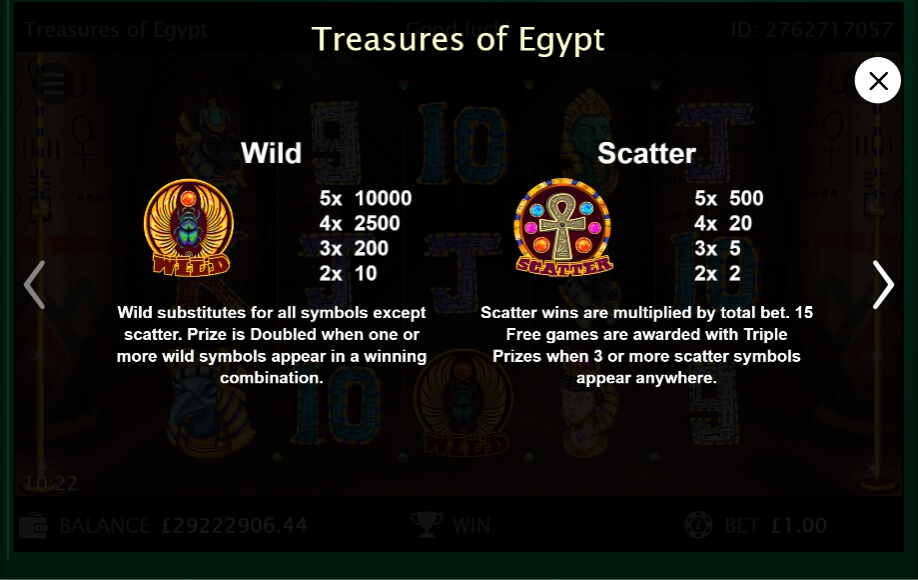 The mysteries of this civilization still attract scientists and archaeologists from all over the world. Each of them is attracted by stories about the seizure of emperors with treasures. Such a ritual existed in fact and every Pharaoh of Egypt after death was buried with his gold. So, Egyptians thanked him for many years of government. For many centuries, scientists have tried to uncover all the secrets of the pyramids and also to find all the gold, one this has not succeeded to anyone.

Therefore, the Cozy company offers you to become an experienced archaeologist and explore one of the most terrible pyramids of Egypt. Do you have enough courage to go on this trip in the Treasures of Egypt slot?

Every detail of the video slot reveals the idea of ​​the developers. After the user opens this gaming machine, 5 reels and 20 active lines will appear on the screen. Thanks to the fact that the playing field is transparent you can view strange hieroglyphs and explore the tomb of one of the pharaohs. To convey the mystical atmosphere, the developers have used a dark background. Thanks to this, all the characters look brighter and more qualitatively drawn.

Before starting the game process, the user must necessarily familiarize him/her with the peculiarities of the video slot. Therefore, he/she needs to study the theoretical information that is in the PAYTABLE section. Also, this tab will show the user the structure of all active lines, on which the new pictures appear. Besides, here you will find a table of payments where all symbols and corresponding coefficients are fixed. If the player is interested in a step-by-step instruction on how to properly play the game, he/she can use the HELP tab.

After this, the user should determine the appropriate number of lines that will participate in the round. You can select from 1 to 20 lines using the LINES button. In addition, the user needs to adjust the size of the rate according to his budget. To start the round, PLAY must be activated that performs single spinning or the AUTOPLAY function.

The Isis has useful functions since it can replace any song and complement your combination. In addition, payments for such chains will be doubled. Fine pyramids are a scatter symbol that always has different functions. Playing at the maximum rates, the player will receive 10,000 credits for several such images. In addition, you have a great opportunity to participate in the round of free spins. Here you can win real money and also get positive emotions.

To make the slot more interesting, the developers have decided to add a risk game. After the user creates a chain, he/she can try to double the payout. To do this, he/she must guess the color/suit of the card. If you do it wrong, the prize will be canceled and you’ll back to the main game.

Rolling in the Dough