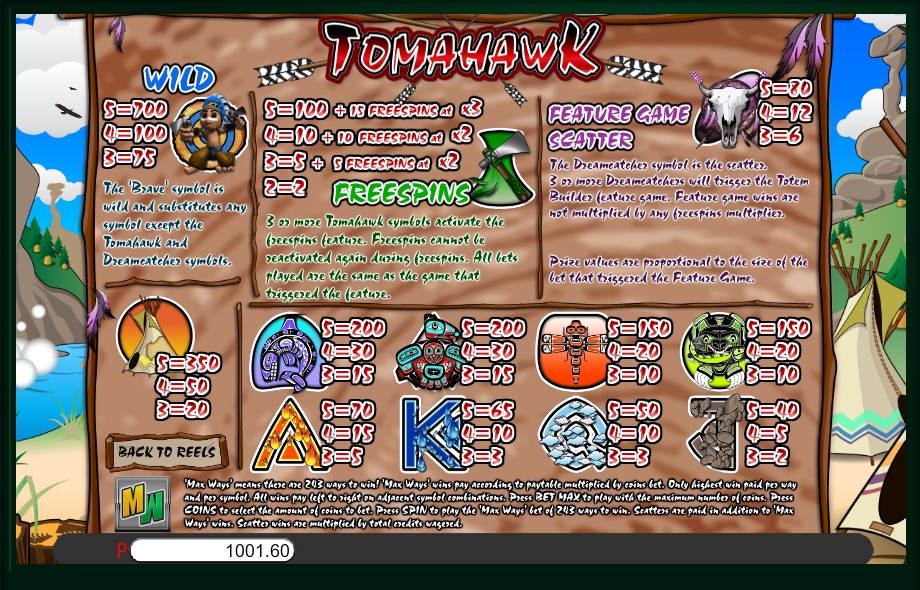 If you have never been fond of the culture of North American Indians, perhaps you do not know that tomahawks refer to the traditional battle axes that were used by virtually all tribes. And the developers of the BetOnSoft used this word as the name for the video slot, dedicated to the Indians. This is an interesting model with a few exciting and advantageous options that will definitely not leave you indifferent. The Tomahawk online is a free slot machine with five reels, three rows of pictures, special symbols, a bonus round, bonus prizes, additional multipliers and other options.

There are no traditional active lines here. Winning combinations are formed from identical pictures, dropped out on adjacent drums, starting from the far left. Where exactly they are located on the drums does not matter. The bet on spin is always twenty-five. You can put from one to five coins. Consequently, up to one hundred and twenty-five coins with a value from one to twenty-five cents (only thirty-one euros twenty-five cents) are accepted for the round.

When calculating the payment, the size of the bet and the coefficient set for each combination are taken into account. The maximum multiplier specified on the table is x700. The exceptions to these rules are described in the next section.

The wins are accrued over all the chains that formed behind the spin are summed up. Then they are immediately transferred to a common account, since there is no chance game in this model.

The Wild is a very important element, because it not only forms combinations by itself (which, moreover, are paid for by the highest coefficients), but also replaces the missing pictures in chains of other symbols. Free Spins differ in that they are paid regardless of how they are located on the screen, and the amount of winnings for such combinations is calculated by the general rate for spin (from two to one hundred).

Three or more Free Spins also run from five to fifteen free spins, during which additional multipliers x2 or x3 act. Details are specified in rules. The Bonus is also not tied to the layout. From three similar pictures are paid at the general rate and start a prize game. To set the denomination of coins, click on the round button next to Coins Balance.

Under the panel there are also a number of win function buttons that are needed to go to the cash desk, lobby, menu, settings window and help section. You do not need to download the Tomahawk slot machine, because it can be opened in the browser.

Roll Up Roll Up