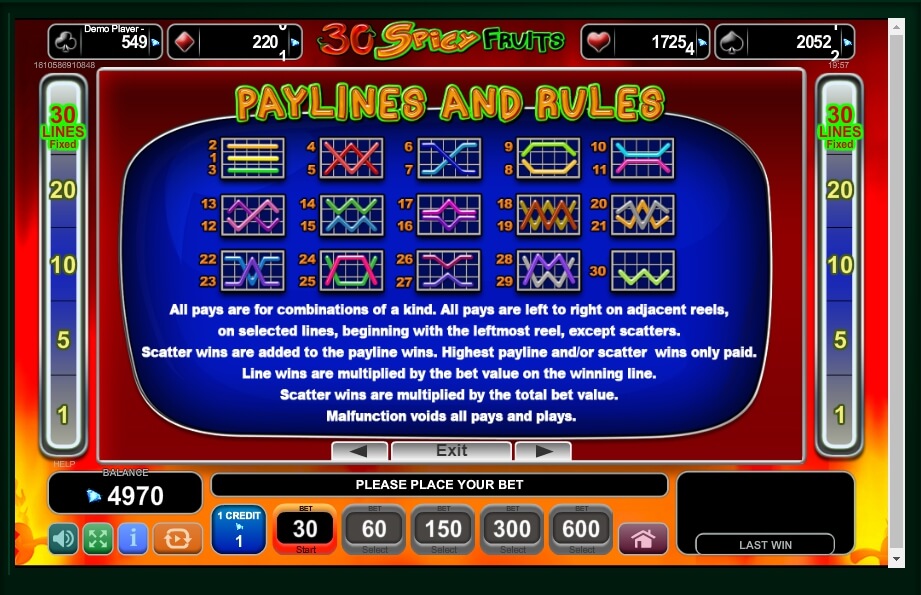 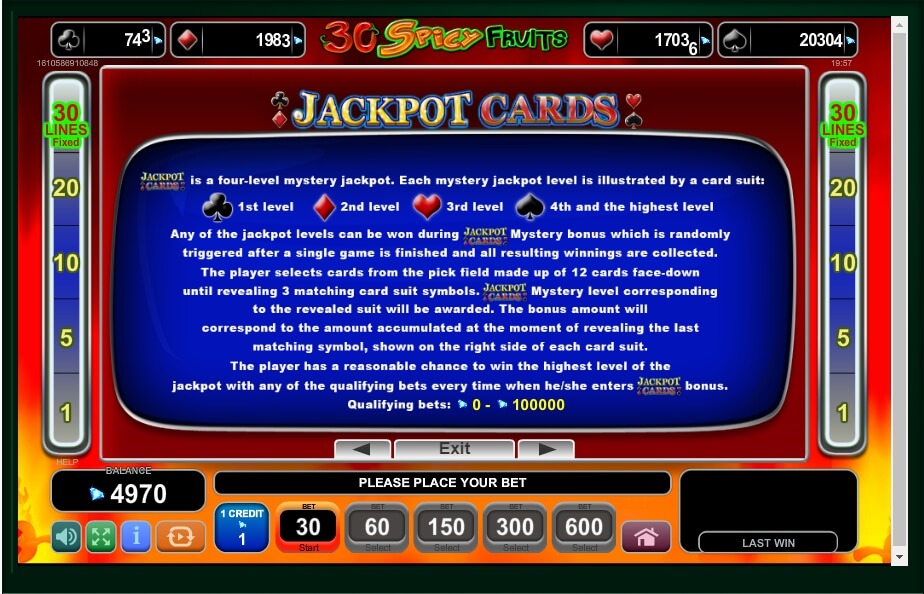 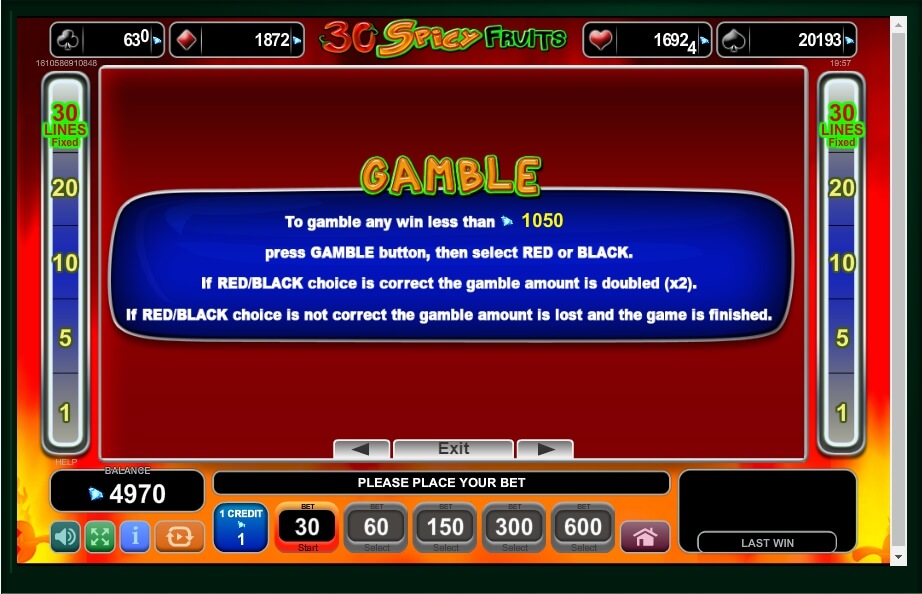 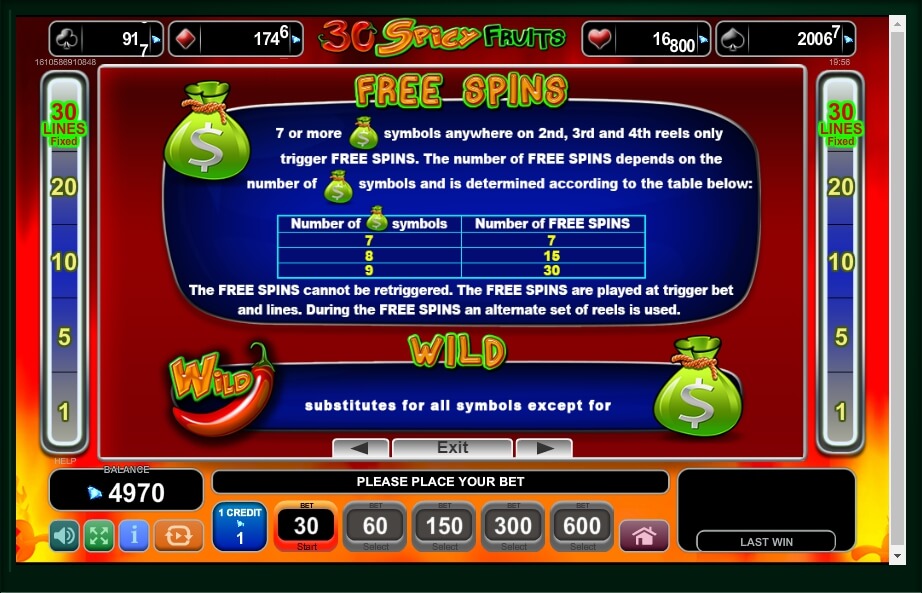 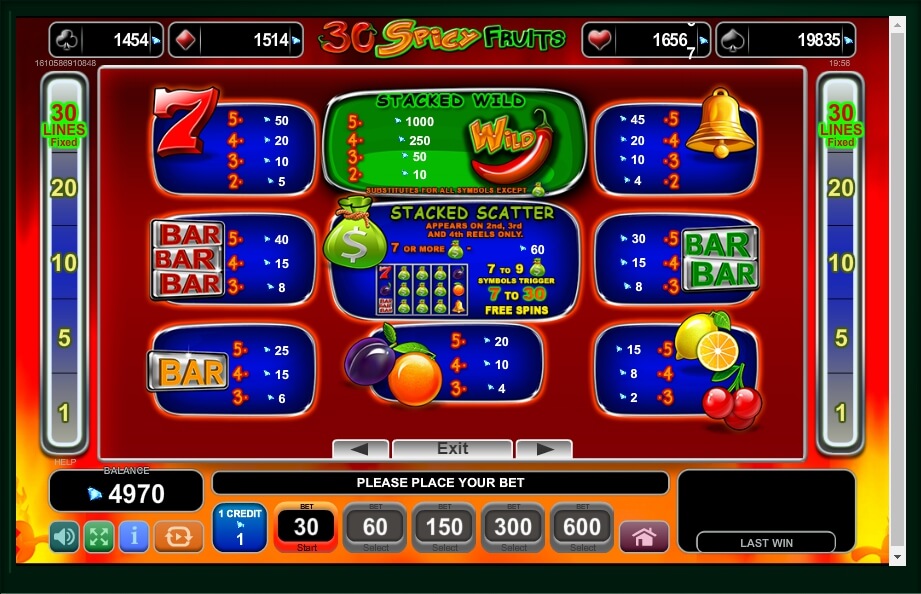 Euro Gaming Technology presents a new video slot game on the fruit theme. It is the bright slot with the one-colored background and simple plot. Just spin reels and watch how juicy fruits are changing each other. The 3D animation and bright HD graphics make this game super good-looking and can help the player to get even more pleasure. There are no odd moves needed to start another gambling session. Players don’t have to download this slot machine on the personal computer. As well as there is no need to complete registration on the website you have chosen to play with. Bet real money and win the jackpot doing nothing!

Welcome to the bright and expensive video slot game. The minimal bet is 30 coins. Players can bet up to 600 coins per a game! However, there are 30 paylines in this video slot game. Five reels and three rows in the height make 30 Spicy Fruits to be a kind of traditional games, as in total they form 15 spaces grid and offer gamblers to play with 11 available symbols. They are not stacked and quickly change each other in the game. It gives the gambler a chance to get as many winning combinations as possible. Just spin reels one by one and collect jackpots. By the way, there is the 720 000 jackpot presented in the game.

Players can win it if five wild symbols appear on the screen. One more interesting fact that players have to know is special money for the EGT games. Euro Gaming Technology has created their own type of money for special video slot games. They are called EGT coins. One EGT coin is the same what is one dollar.

The Autoplay option is also available in the game. It can be turned on holding a spin button on the bottom of the interface. After the player is holding on a spin button, an endless amount of automatically turning on spins will appear in the game.

Look for a dollar bag! It is one of the most expensive and profitable symbols in the game. It can be found on the second, the third and the fourth reels. A scatter symbol can both bring a boost and become a profitable multiplier and give the gambler a chance to play on 300 free spins. During free spins the gambler doesn’t have to increase a bet and waste more money.

He/she just needs to spin reels one by one and earn. Appearing on the screen, the scatter symbol can bring the gambler a multiplier of x2. There is also a wild symbol available in the game. It can be met on the first, the third and the fifth reels. The wild one usually costs the most and in amount of five can just bring the player the jackpot.

It can appear on the screen and quickly replace all other playing icons with those that are needed to form a winning combination. The multiplier is turning on automatically after every lucky spin of reels. It is a card game with red and black cards. If the player will make a right choice, cash will be doubled instantly.