Planet of the Apes Slot Machine

You can not play this game for free
For free slots game go
Play free
or
(18 votes)
Game Played: 8
Full screen: close 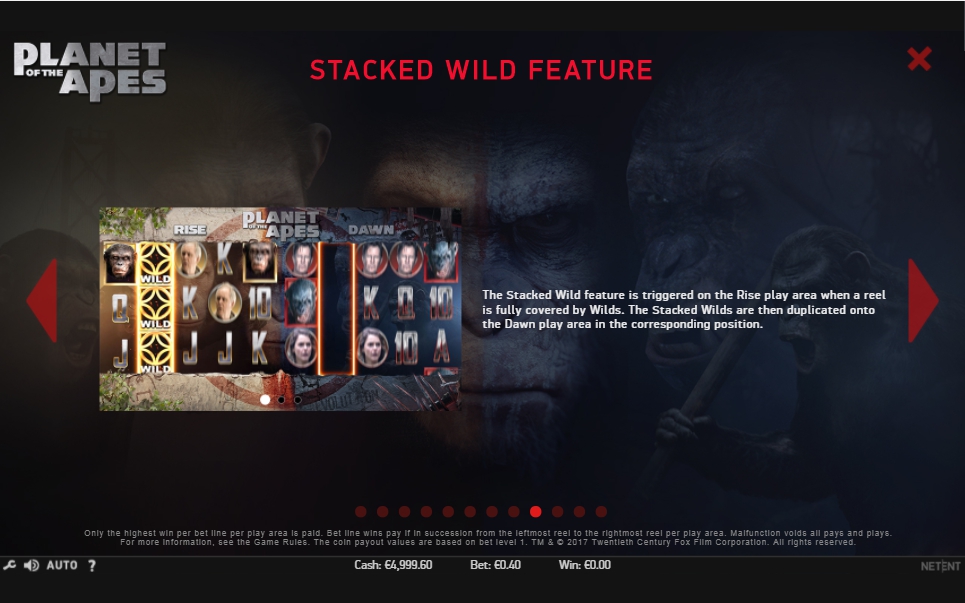 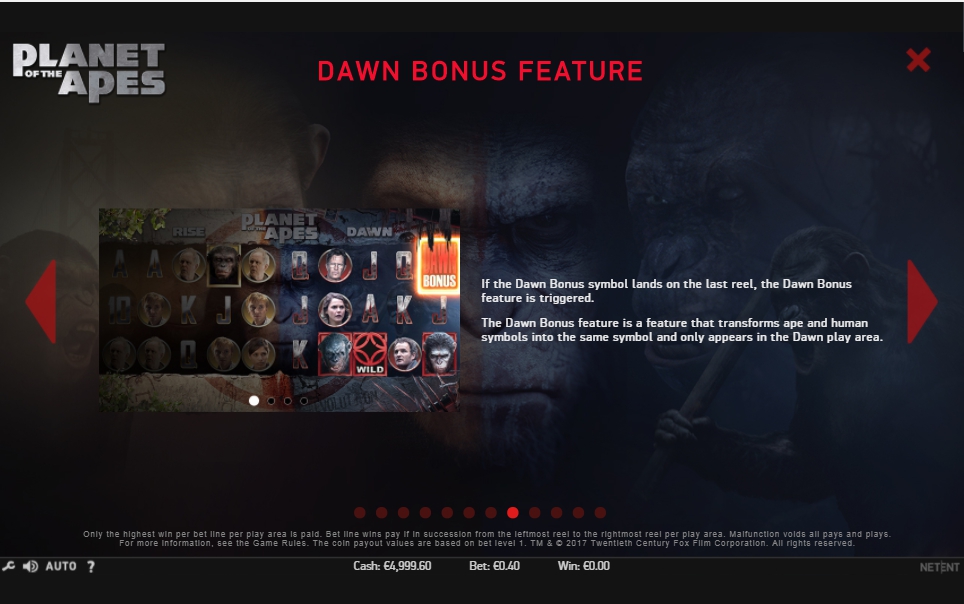 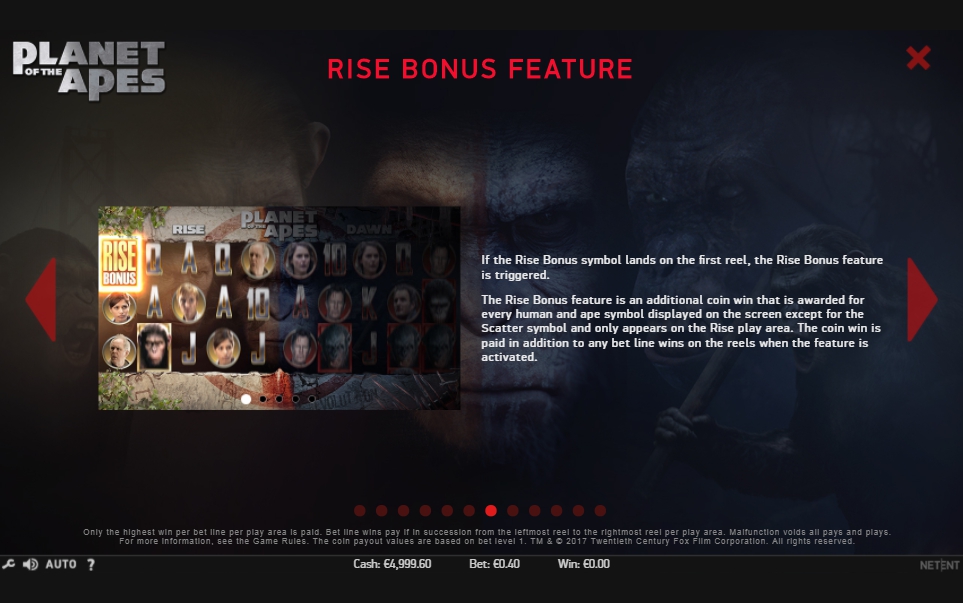 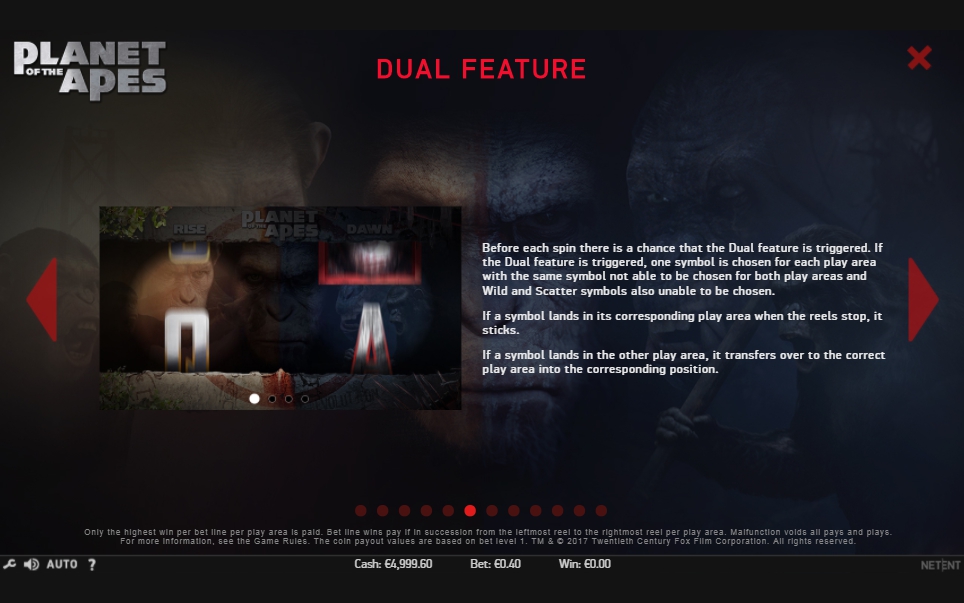 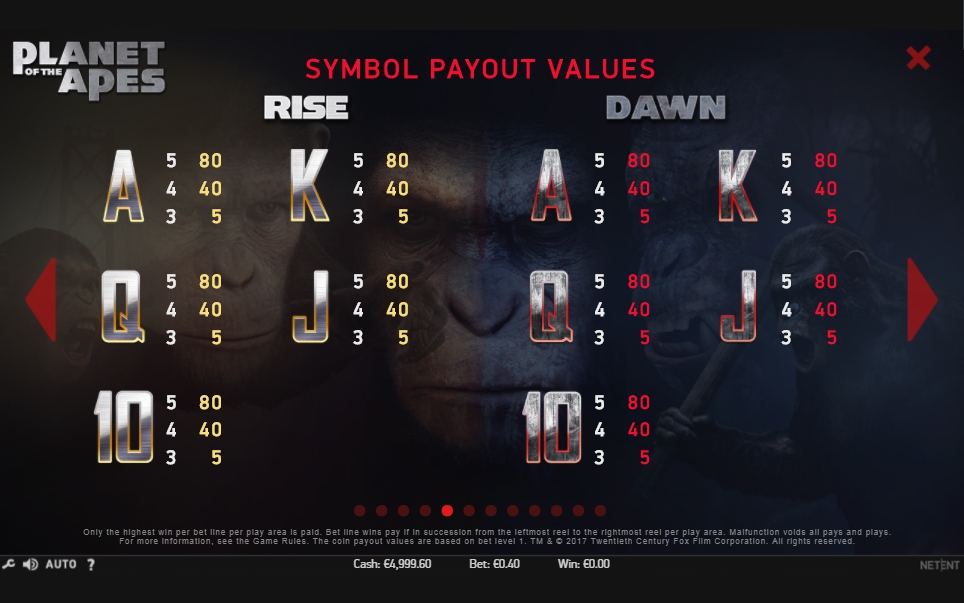 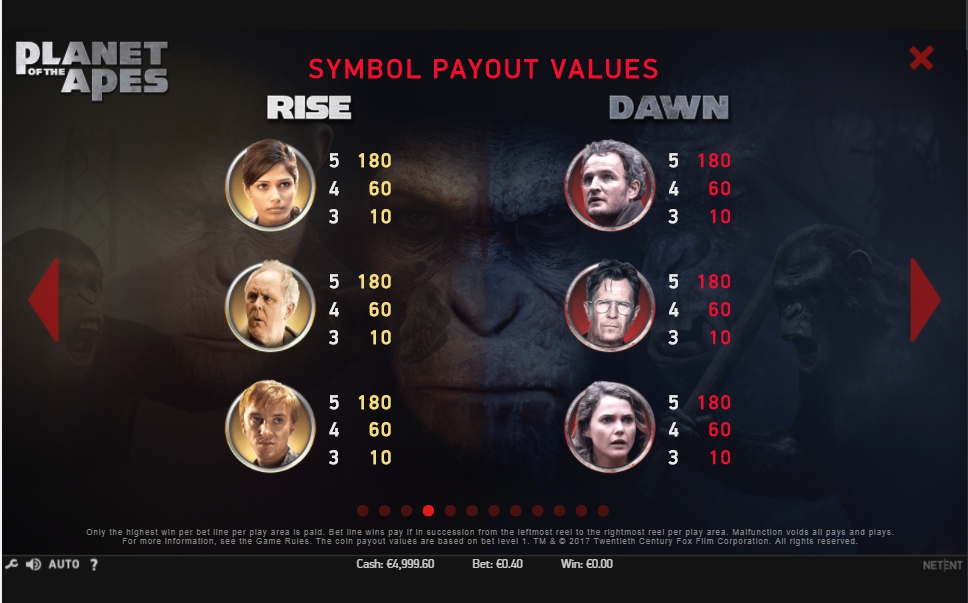 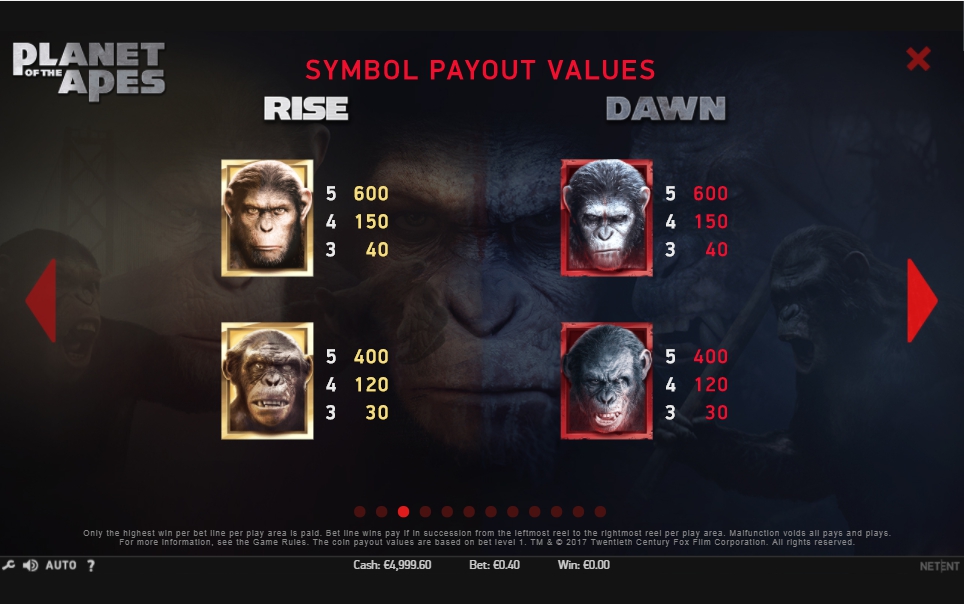 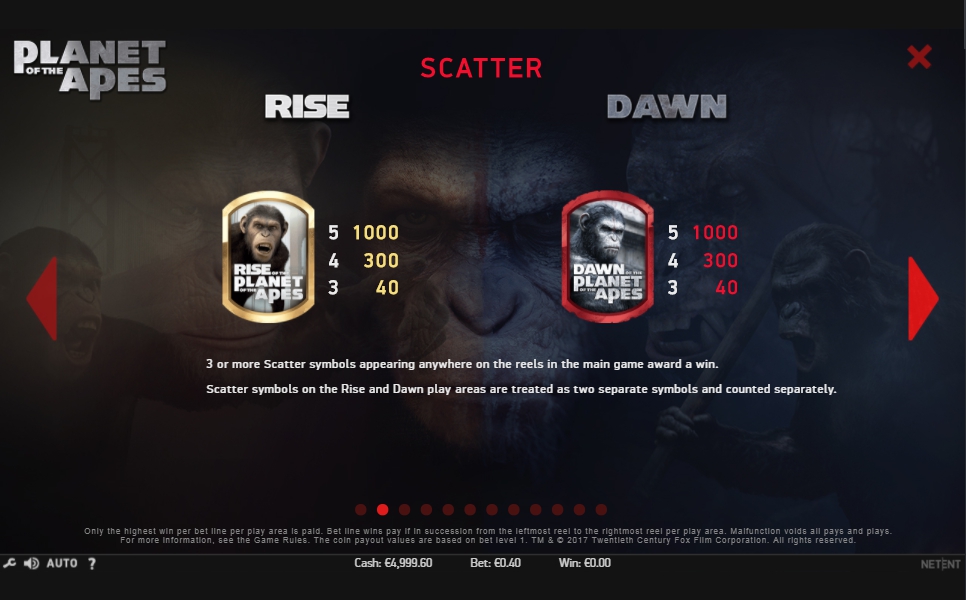 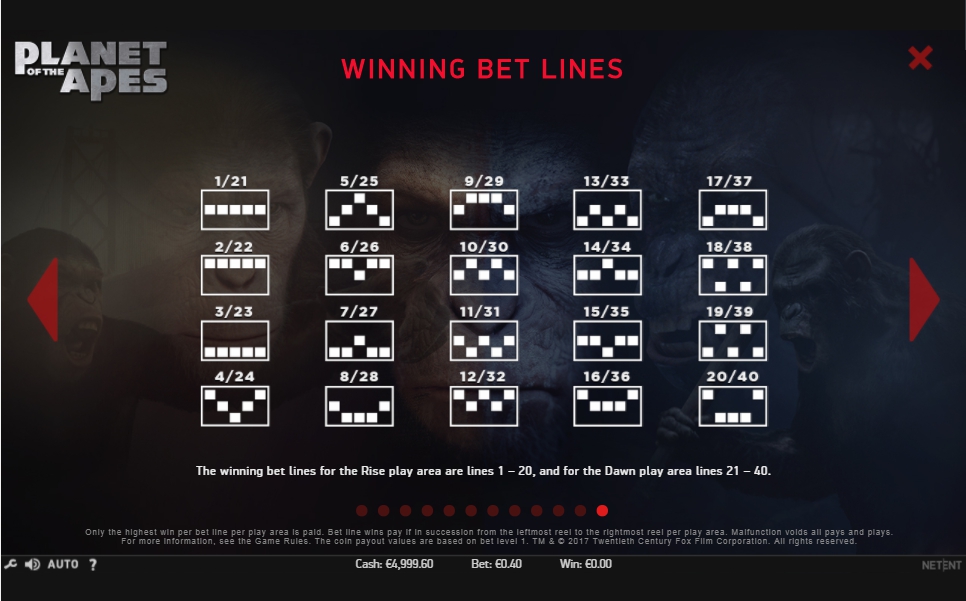 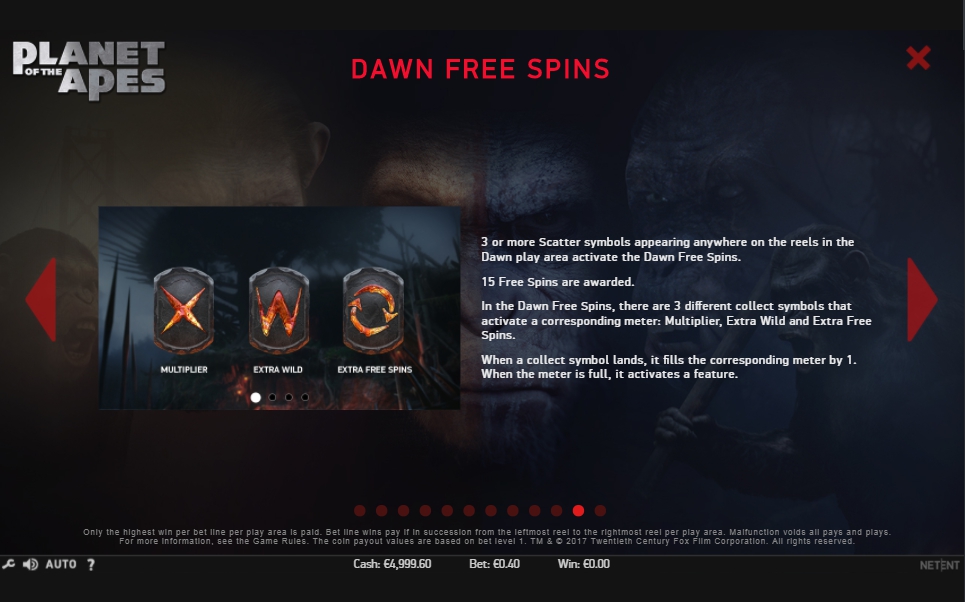 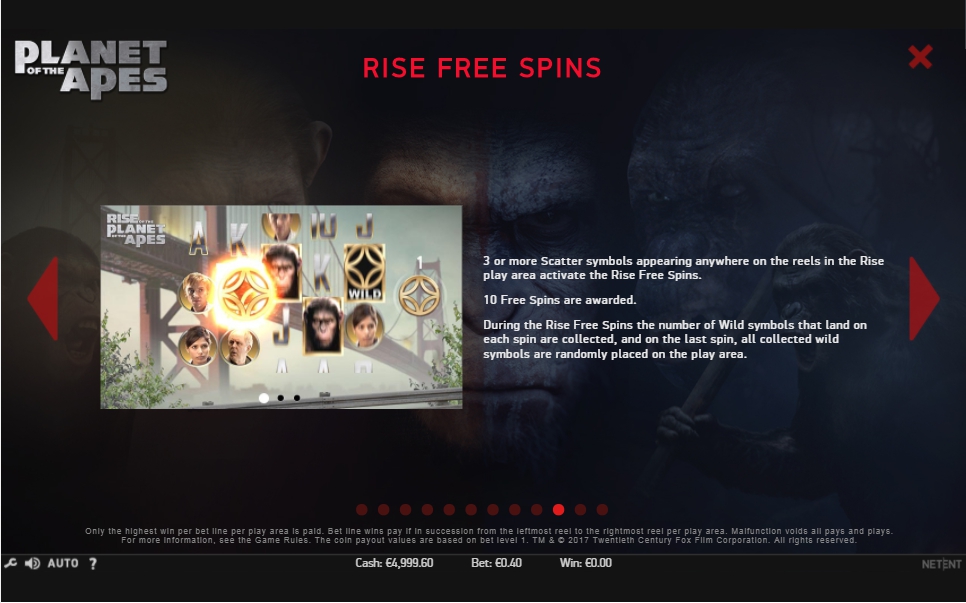 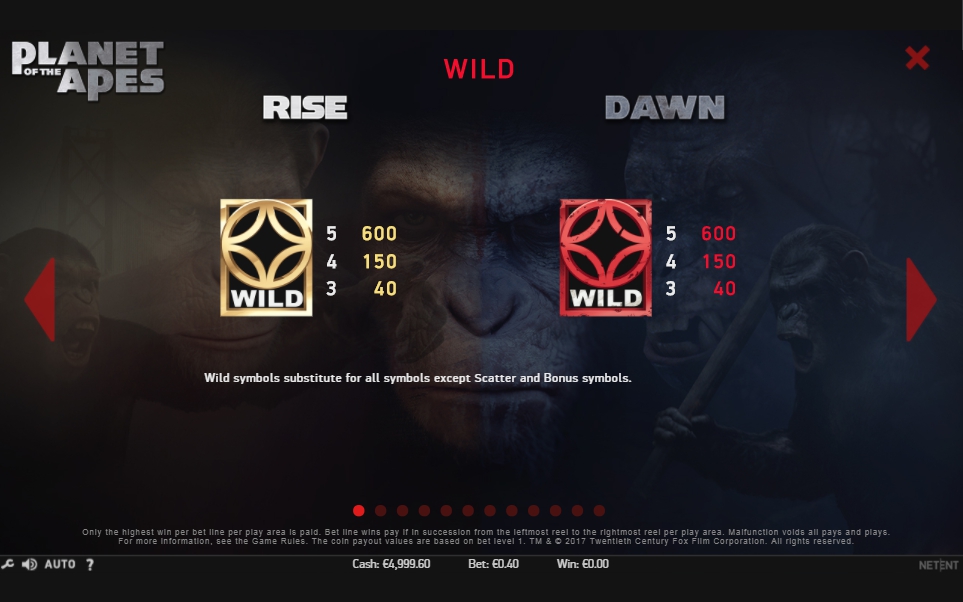 Planet of the Apes Slot Review

The plot of the well-known movie Planet of the Apes inspired NetEnt to release the same name video slot, which is based on the events of both parts of the fantastic franchise. Only in this case, the heroes will fight not for domination on the planet Earth, but for big gains. Probably everyone watched at least one of these wonderful films. Therefore, we will not retell the story, but immediately move on to the online game.

The main feature of the simulator, which attracts the interest of fans of virtual gambling – is the presence of two fields for the game, involved simultaneously. Each contains 5 reels and 20 active lines. The left side of the interface is called Rise, the right side is Down, which corresponds to the names of the two parts of the movie. The design uses bright animation effects: during an active session, the user will enjoy the adventures of a flock of primates.

The dynamics of the game process is enhanced by high-quality audio and bright audio effects. Externally, the game machine Planet of the Apes turned out to be perfect, due to the original images of the characters of the film, which the manufacturer added to the background and symbols.

On the other hand, the slot has retained a proprietary control panel and settings, where you can make changes to the size of bets and turn off the sounds. For mobile devices there is a separate version of the game. It differs in the arrangement of buttons, but it gives equally the same range of emotions and opportunities for earning wins.

During the rotation of the reels there is a possibility of triggering the prize function Dual. She will leave two large pictures in the background and gradually fill them with identical symbols in the process of repetitions. The basic income of users of the slot machine Planet of the Apes will provide at once four variants of bonuses that are launched in a similar way, but have significant differences in terms of the drawings themselves.

-Rise Bonus. Opened by a special symbol on the left and involves the payment of cash prizes.

-Down Bonus. The same bonus can be activated from the right side, but instead of paying cash prizes, the slot will turn all apes and people into a common picture in order to make the winning line as long as possible.

-Rise Free Spins. The first version of the packages of free spins involves the drawing of 10 Free Spins, during which Wild will accumulate to fall on the field in the final drawing.

Planet of the Apes Slot Symbols