You can not play this game for free
For free slots game go
Play free
or
(2 votes)
Game Played: 28
Full screen: close 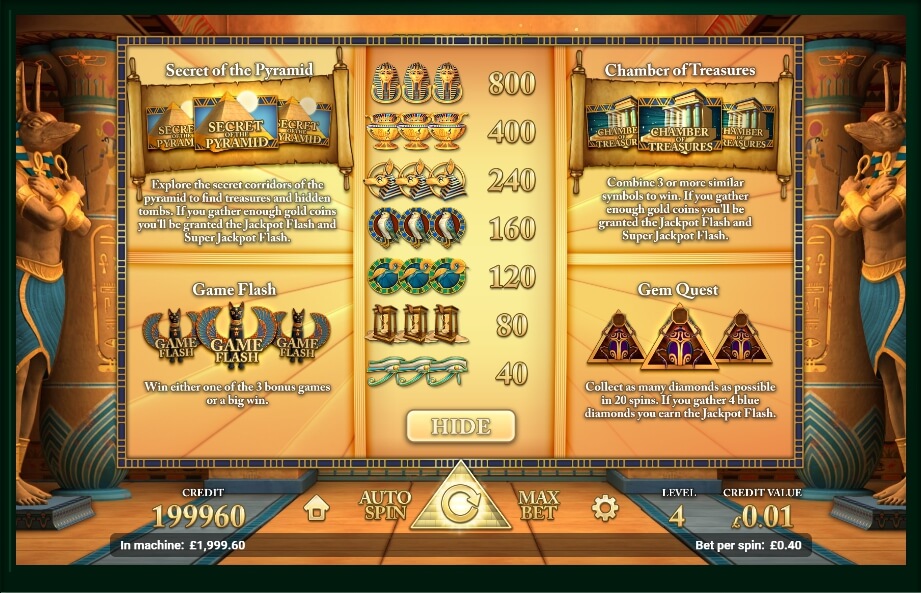 Pyramids of legendary pharaohs, kings that ruled Egypt four millennia ago always attracted attention of many brave adventurers. Archeologists, gamblers, criminals and even military leaders like famous Napoleon were attracted to Egypt by rumors about treasures that were buried alongside Egyptian rulers in their mysterious tombs. Some of those adventurers were successful, some were not – but their stories caused a huge impact on the world culture and contributed to the creation of great movie franchises like The Mummy. Usually, when something becomes popular – video games are made about it.

Golden Pyramid is one of such Ancient Egypt-themed games, namely a video slot game, where you can win real money by challenging defenders of the ancient Pyramid. So now you don’t have to dig for treasure in the dark tunnels – you can just play Golden Pyramid online, especially considering the fact that it requires no download and no registration.

Being the richest rulers of their times, pharaohs can easily offer players a huge jackpot of 200,000 dollars. In order to challenge sphinxes, which protect the treasure, a player has to spin 3 x 3 reels, hoping to get a winning combination of 3 similar symbols. Symbols are counted on 8 paylines – 3 horizontal, 3 vertical and 2 diagonal. There are 11 different types of symbols in this game. 7 of them are the symbols that give money, and other 4 are awarding special bonuses when collected.

Paying symbols in order of their profitability are as follows: an eye hieroglyph, an hourglass, an ibis, a falcon, head of Anubis, golden sepulchral urn and pharaoh golden head. A pyramid, the chamber of secrets, a scarab and holy cat’s statue can be found among bonus symbols. Golden Pyramid is played on a game field decorated like secret chamber of the Pyramid. Two sphinxes can be seen laying on the ground on both sides of the reels. Generally, Golden Pyramid creates perfect atmosphere of exploring ancient ruins in search for treasure. Beautiful graphics are complimented with excellent game animation. On the top of that, Golden Pyramid has an autoplay function.

There are 4 bonus modes in Golden Pyramid. When 3 Secret of the Pyramid symbols are collected, a player gets a chance to win jackpot by exploring the Pyramid and collecting coins in adventure mini-game. Triggered Chamber of secrets gives access to match-3 bonus game where you can also win a jackpot.

Collecting scarabs gives access to Gem Quest mode where you have to collect gems during 20 free spins. By collecting 3 cat statues awards you win big or immediately win in random mini-game. As if packing 3 games inside 1 was not enough, Golden Pyramid also has an interesting symbol swap function, when winning symbols are swapped with random symbols after spin payout, so the player has a chance of multiple wins per 1 spin.

Other Games by MagNet