You can not play this game for free
For free slots game go
Play free
or
(9 votes)
Game Played: 6
Full screen: close 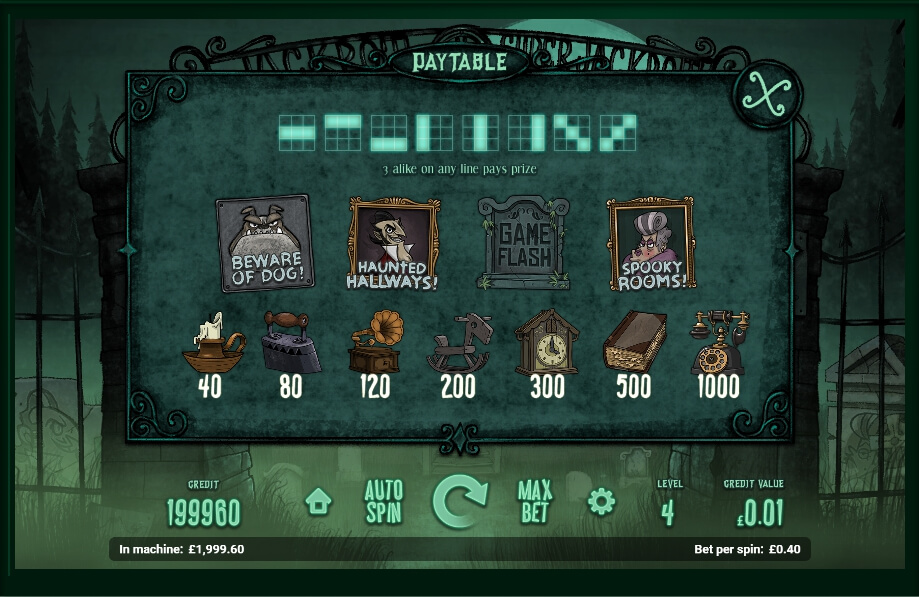 Scary supernatural things like ghosts, vampires, zombies etc. were always attractive and interesting for humanity. Rumors about specters haunting an old abandoned houses are not something uncommon in every town. Since long time ago people have wondered, if there is something beyond our reality and mortality. Even while Haunted House slot game gives no answer to these questions, instead this game offers an opportunity to win real money without going to Las Vegas casinos.

It should also be noted that this game needs no download and no registration.

Somehow, haunted houses tend to have a Secret. It can be a skeleton in their walls, a long forgotten painting or diary, a powerful artifact or, in some cases, a treasure. Haunted House ghostly inhabitants are apparently greedy ones, as they can only spare 500 dollars for a jackpot and 10,000 dollars for a super jackpot.

Nevertheless, this game offers a lot of other ways to make money. In concept, it is just simple 3×3 reels game with 8 paylines. But unlike most slots machines, reels themselves are not present onscreen. Instead, when the “Spin” button is hit, different symbols start levitating out of haunted house, forming 3×3 structure in the air in front of it under the arch of entrance gate. 7 paying symbols, presented in the game, include different household things like an iron and a book, and bonus symbols include two portraits of family which owned the House, a tombstone and “beware of the dog” sign.

Background animations such as lights appear in random windows of the House and bats fly out of it creates thrilling atmosphere. Sometimes lightings hit somewhere far beyond the house or bat, hanging from entrance gate, spreads its wings. In total, game graphics and animation are made with great quality.

Just like a lot of other games, made by Magnet Gaming, Haunted House contains 4 bonus modes. Collecting 3 Spooky Rooms triggers a quest mini-game where you have to explore the rooms of the Haunted House and click different floating items in hope to find hidden treasures. Triggering Beware of the dog mode makes you feed the dog with bones that can be found in the House’s garden.

Collecting 3 Haunted Hallways lets you play a labyrinth-exploring mini-game. Collecting 3 Game Flash tombstones awards you will be with instant win. Another interesting game feature is the fact that when 3 winning symbols are collected, x2 multiplier is applied to the next spin, which is performed automatically and free of charge.

Other Games by MagNet