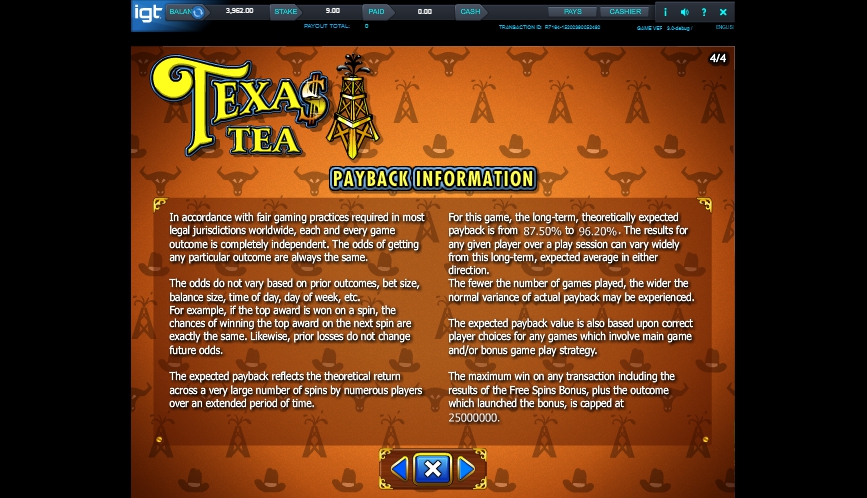 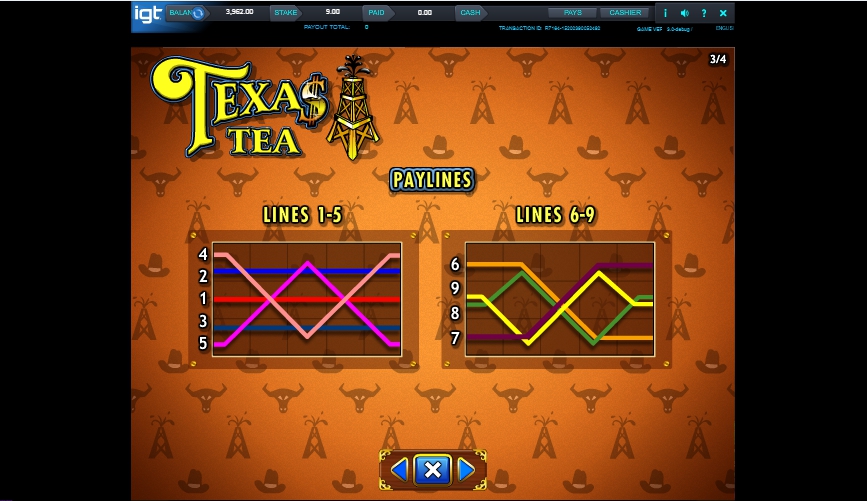 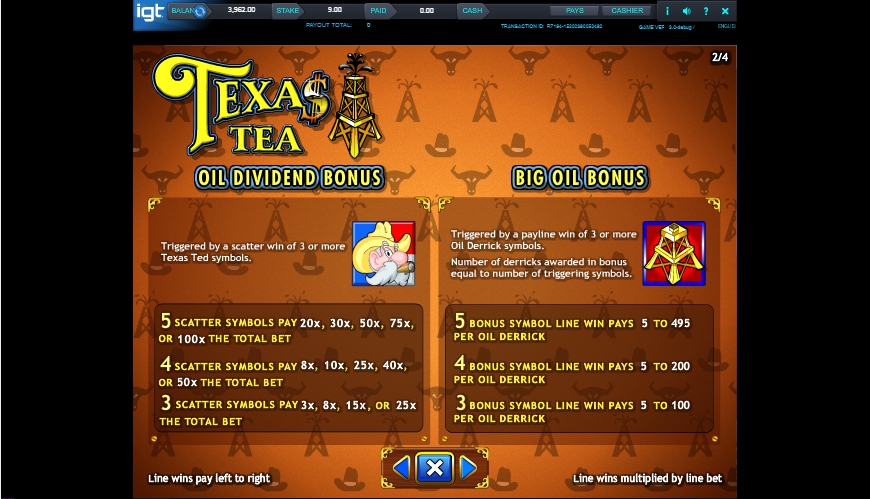 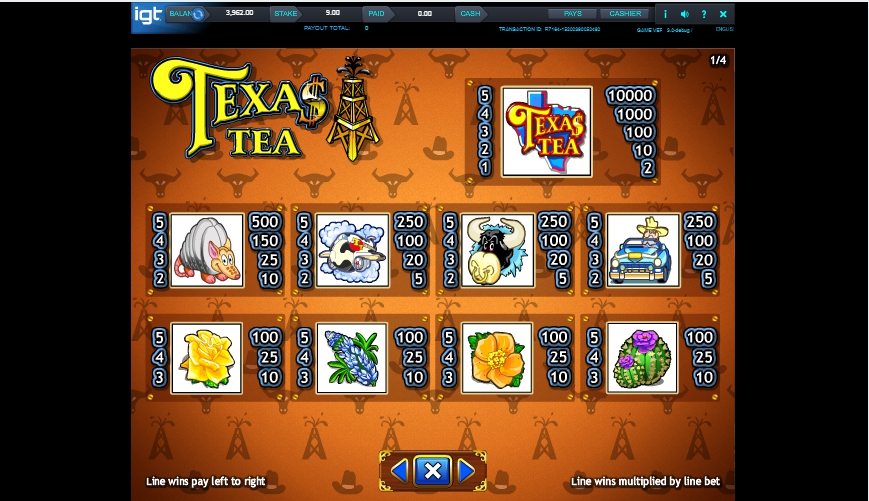 Texas Tea from IGT is a slot machine that has recently appeared in online casinos. However, gamblers have already noted a user-friendly interface, colorful design and potentially high payouts.

The design of the slot is a combination of cartoon characters and a fundamentally new animation. Against the background of the drum, there is a blue sky and two oil rigs. The symbols of the game are well-drawn objects in the Texas spirit. For the soundtrack, the developers chose dynamic music in a cowboy style.

The Texas Tea slot machine is characterized by medium volatility, where the minimum bet is 5 credits, and the maximum is 9,000. In addition, the declared theoretical return to player ratio is up to 97.35%.

There is no need to download the slot – it works online thanks to the HTML5 technology right in the browser of any device. You will not find complex gameplay settings in this representative of online slots. Gamblers note the ability to adjust the volume of sounds and music.

The interface of the Texas Tea slot is presented in English, but it will be easy even for novice players to figure it out. There are no non-standard buttons in the slot game, so for a comfortable game it is enough to study the menu and the paytable in advance.

Next, we’ll look at the name of the buttons and their options:

Texas Tea casino slot is equipped with five reels and a maximum number of paylines – nine. Their number can be changed at the request of the gambler.

You can put from 5 to 2000 coins on one line. The denomination of banknotes is easy to clarify in the paytable section. The winning will be determined depending on the combination odds and the selected bet. For calculation, the system will automatically multiply these indicators. The maximum possible coefficient is x10,000. 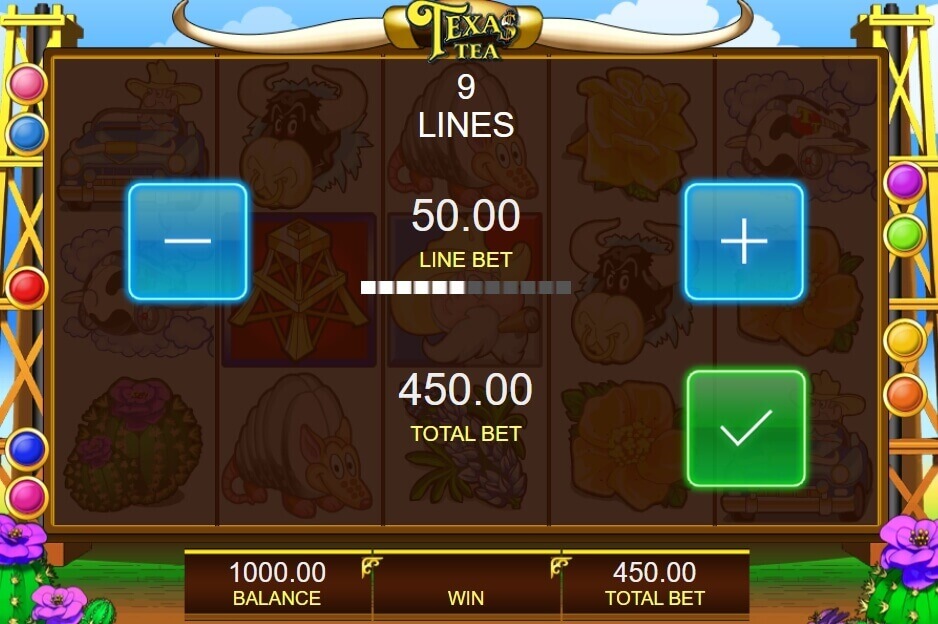 In Texas Tea online slot, a combination of identical symbols located on the same payline is considered a winning one. The standard number of symbols in a winning combination is from three to five. If several connections drop out on one line at the same time, the highest by the coefficient is considered the prize. The system transfers coins to the user’s account immediately after the reel stops.

There are not many symbols in the game. The main ones are listed in the table.

The amount of remuneration varies depending on the rate. At the minimum, it is less, at the maximum, respectively, much higher. 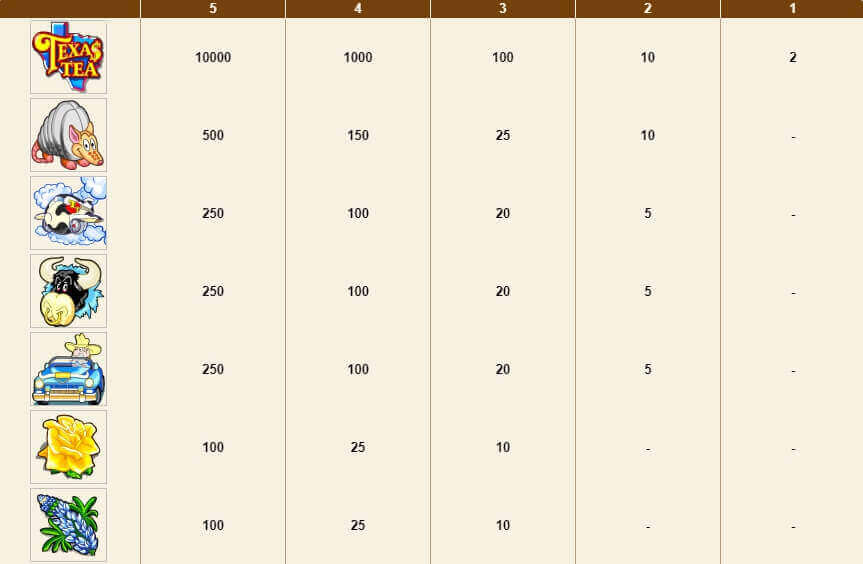 The most expensive symbol is the Texas Tea game logo. It is paid anyway if it appears on the screen. Also, this symbol can double the bet even if there is one on the leftmost reel. The maximum winning of 10,000 coins will appear if five such symbols appear on the screen, located in one row.

Texas Tea Slot Game has an interesting feature. Unlike most other machines, the reel lacks the “Wild” symbol, which, according to the rules, can replace any symbols in combinations.

But there is another special icon – “Scatter”. On the screen, he is presented as an image of an elderly oil industrialist. A combination of three or more such elements located on one active line is paid for. The gambler wins if the following picture appears on the screen: the player finds himself in the office, where the oil worker writes a check.

To increase the chances of a decent reward, it is worth experimenting with the rates during one gaming session. It is convenient to add and subtract game credits using the plus and minus signs.

Detailed descriptions and functions of the game can be found in the options panels. The main one is the lower game panel, where you need to select the amount of the bet and the number of active lines. There is also a key for scrolling the drum in automatic or manual modes. The second panel contains: a button to turn sounds on / off, full slot rules and a payout schedule.

The first bonus that can be found in Texas Tea is the “Oil Dividend Bonus” special game. It is activated if more than three portraits of old Ted appear on the screen. The size of the reward is calculated randomly, but it directly depends on the number of winning symbols that have dropped out on the reel. 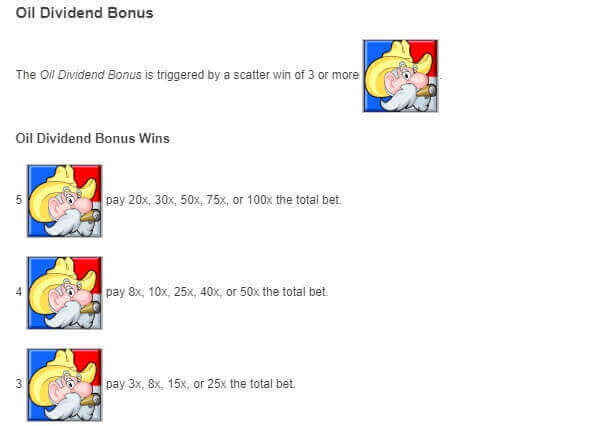 The odds by which the winnings are multiplied:

The winnings are calculated as follows: the coefficient is multiplied by the total value of the spin. Nothing depends on the player in such a bonus round.

The second type of bonus round in the Texas Tea slot “Big Oil Bonus”. It starts when winning combinations with the oil rig icon appear on the reel. A map delimited into nine zones will open in front of the gambler. The player must choose any three sites and place one tower in each. Then the automatic oil production process will begin. The player will only have to observe how much minerals can be obtained. The prize will depend on the total amount of oil. The system will calculate the remuneration based on the total rate.

An important feature in Texas Tea is that Scatter symbols are missing. This means that the developers did not foresee combinations that can activate free spins. There is also no progressive jackpot in the game, but gamblers win big money even without such a bonus. Practice shows that for this it is enough to make high rates.

In addition, in the Texas Tea slot game there is no game to double the prize after a winning combination. Users will not be able to take risks, but the received reward will be immediately transferred to the bankroll.