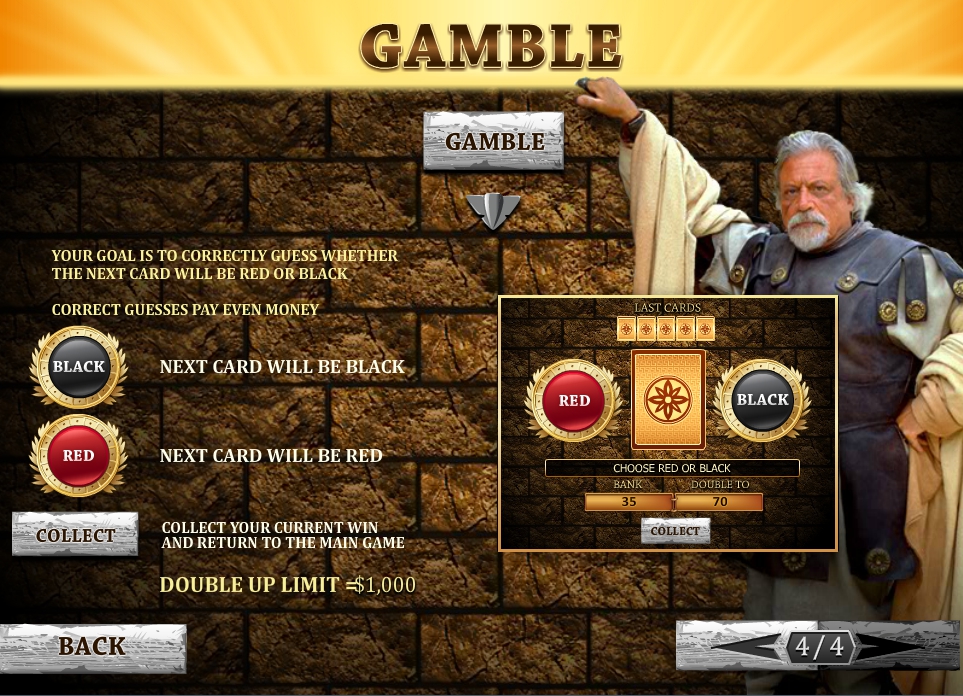 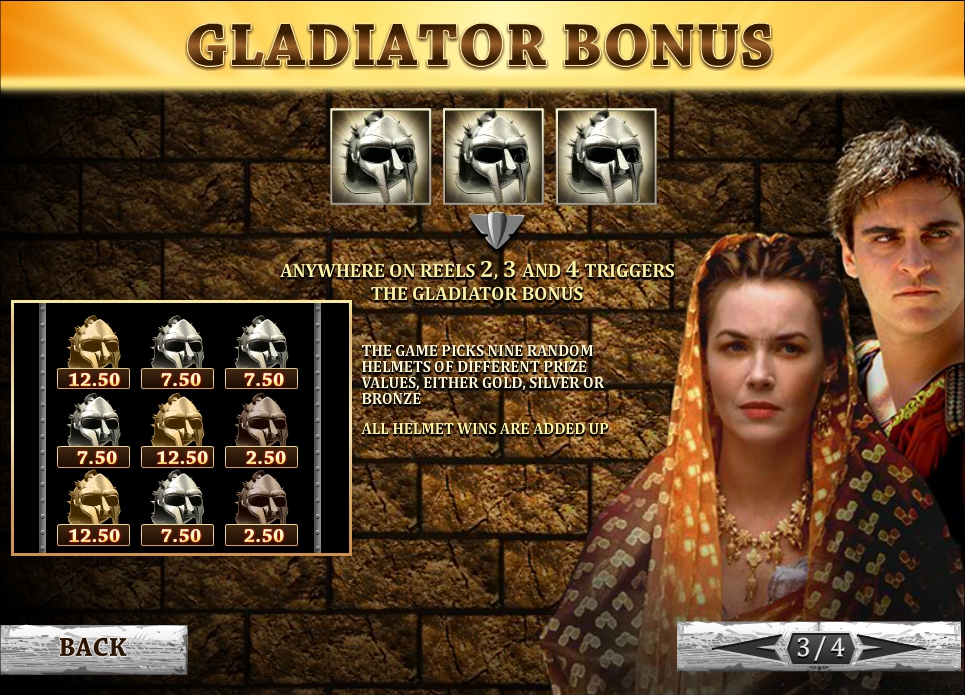 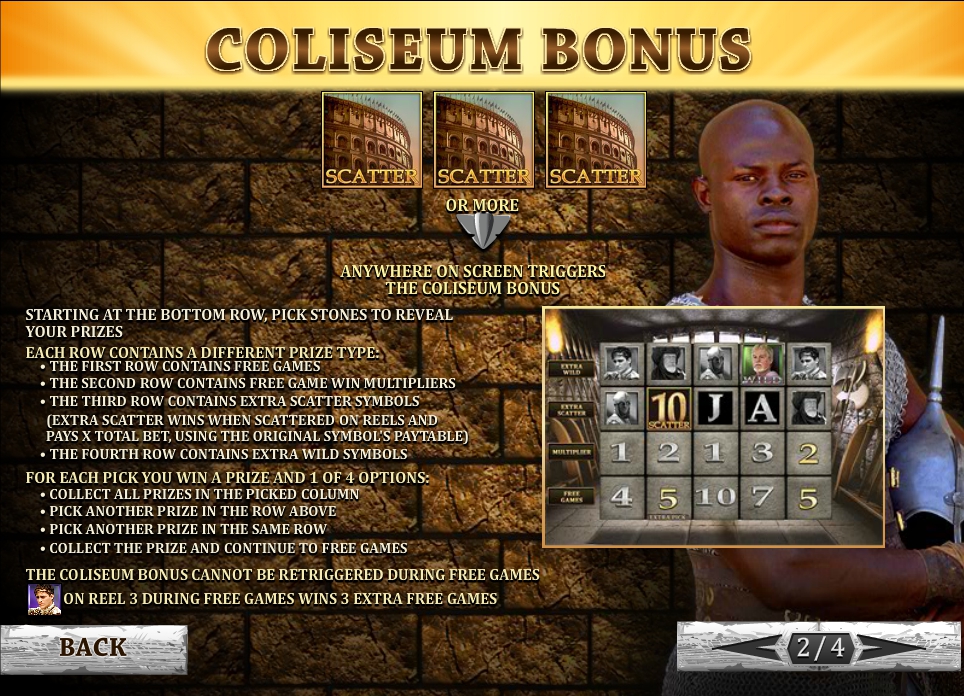 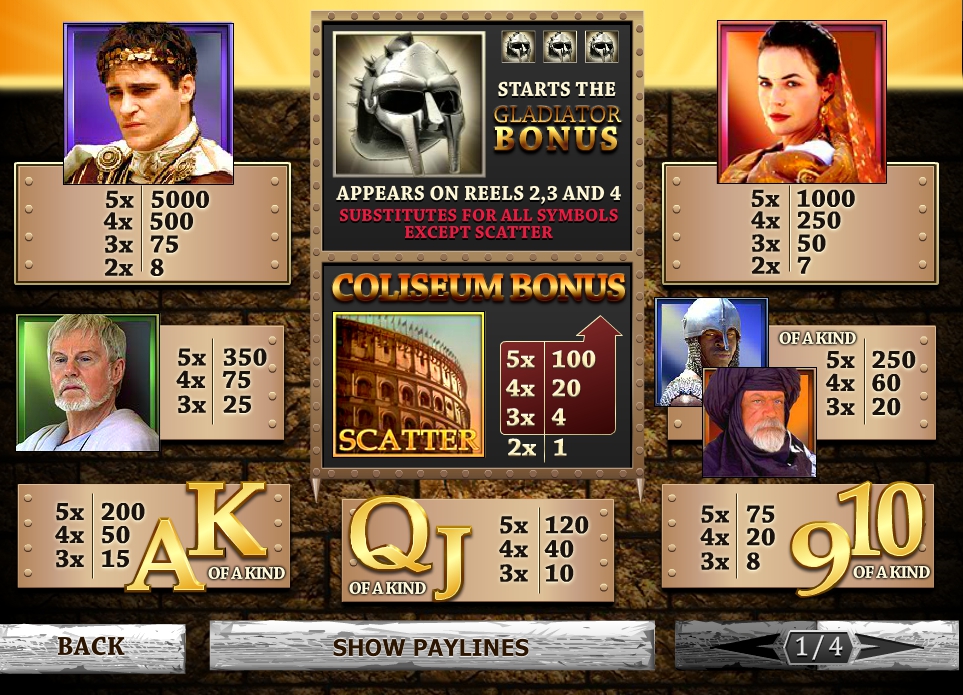 Ancient Rome is a fount of the historical heritage, the stock of which does not run out to this day, giving us hundreds of stories for movies, novels, comics, and now game slots. The popular Gladiator slot, produced by Playtech, is made in the appropriate theme. Gladiator fights in ancient Rome occupied an honorable place. To see the battles of the gladiators, who fought desperately for the amusement of the public, came the most, including the highest knowledge of the empire. The developers of this gaming machine creating their slot are inspired by the film of the same name.

Gladiator is a fascinating slot game on five reels with 25 winning lines and stunning graphics depicting the heroes of the famous film. Also, the game will be accompanied by bravura music, symbolizing the victory and tuning the player in the right way. But in the game you will enjoy not only beautiful graphics and music: you also have free games, bonus offers, special symbols that will increase your chances of winning and, finally, a risk game where you may be able to double your bets .

The main buttons that you will use are: lines, where you select the number of lines that you need to accomplish your goals in the game, and bet per line, where you bet on the line. The option bet max is presented for desperate brave souls who play at the highest rate. After you have decided on the number of lines and the size of the bet, boldly start spinning the reels by spin, located in the lower right corner of the screen.

On the other side of the panel is a payout table, hidden under the info tab that will tell you about the payouts for each symbol and will describe in detail the basic rules of the game, bonuses and various functions of this gaming machine. The automatic game is also at your service in the autostart tab. Information about how the game is running, how much is left on your deposit account and how much you won, will immediately be displayed on the screen.

Simultaneously with the win you get the right to participate in the risk game to double your prize amount. Using the gamble button, you traditionally see 2 symbols on the screen. All you need to do is choose between the “red” and “black” buttons that must determine the color of the upside down map. Your choice in turn will decide the future fate of the awards you received in previous rounds: both the amount doubles and you can continue the game, or all your winnings at once burn out.

There are two bonus games in the game. The first one is “Gladiator bonus”. It will be activated if three to five symbols representing the helmet of the gladiator appear on the screen. Here you will have to choose from nine helmets of different numerical dignity that will determine the amount of your prize.

The second one – “Coliseum bonus”, starts with the appearance of three, four or five scatter symbols anywhere on the screen on the 3, 4 and 5 drums. You will see a special board in front of you that will offer you to open cells with symbols and earn yourself points, free games and stuff.