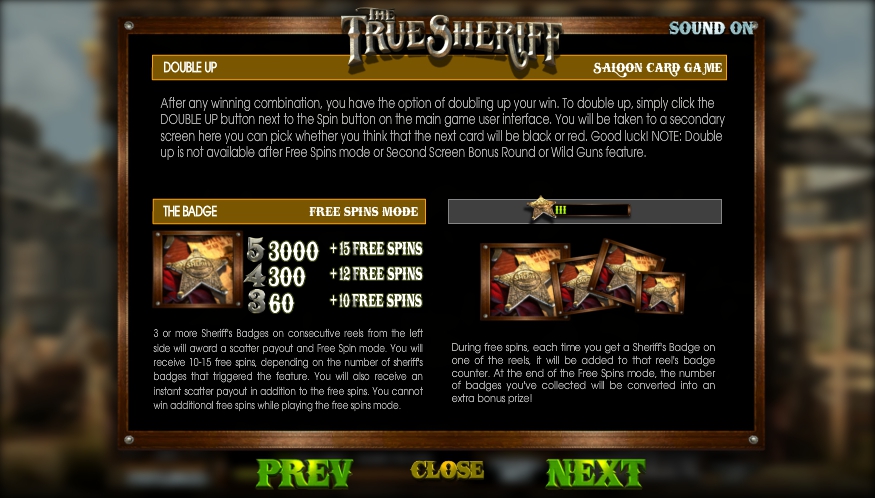 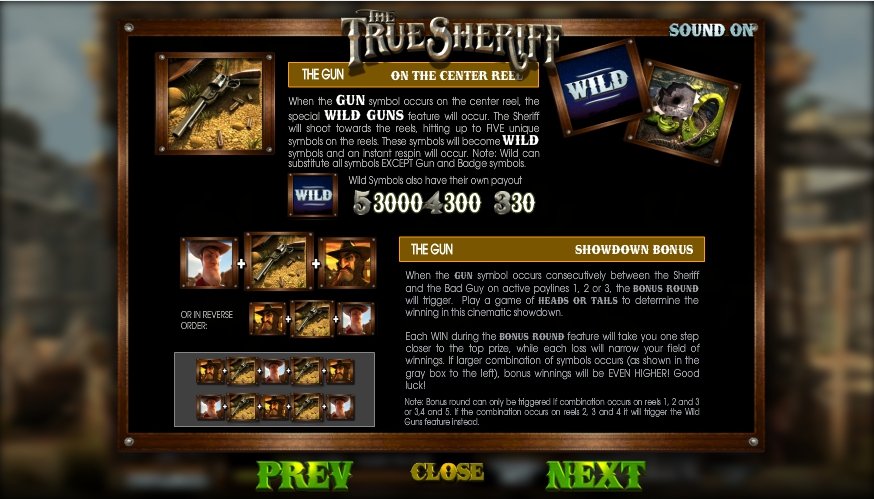 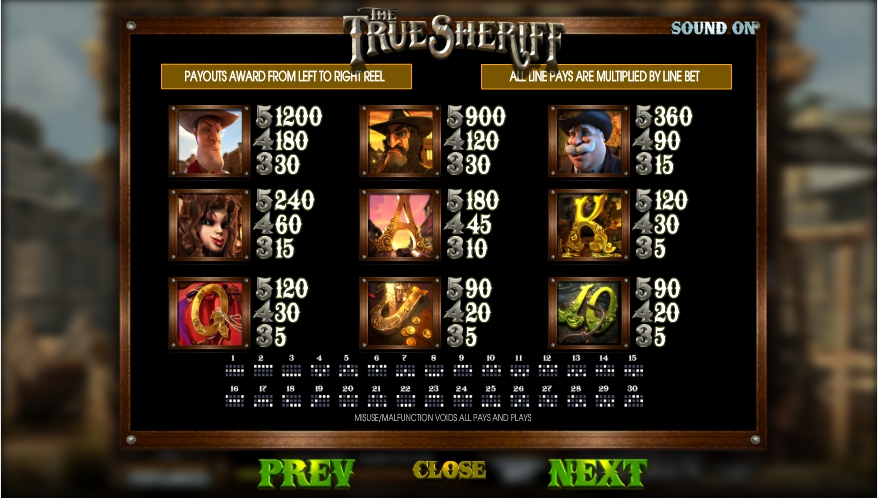 The True Sheriff is one of the most prominent slot games by the Bethsoft casino software developer. It is popular among novice and experienced gamblers and there is a good reason for that. The game has amazing 3D animation, its rules are simple and gameplay is enjoyable, and it is possible to win up to 750 000 credits when playing it! The main theme of this game is the wild-wild west: with cowboys, sheriffs, robbers, beautiful ladies and guns. The game can be played for free or for real money. The latter option gives a chance of winning some cash while enjoying a simple casino game.

How to play the True Sheriff game

The rules in this slot machine game are very simple and straightforward. To start the game, a player needs to choose the bet size first. The software developer gives a possibility to choose any amount between 0.02 to 1 coins. It is possible to put in between 1 to 5 coins per each pay line, and there can be up to 30 pay lines in game. The maximum winning and the jackpot can only be won if the player chooses the biggest size of the bet. The software developer does not allow jackpot winning big with small bets. After a player has made his choices, the game can be started. It is possible to play it manually or in the auto play mode. The final prize does not depend on this at all.

Bonus rounds and special symbols in the True Sheriff game

There are many ways to win in the True Sheriff slot game. One of the features is known as Double Up. It always appears in game after a winning sequence hit the screen. A player then is offered to take chances and try to double the amount of coins. The free spins feature in this game is activated when 3 or more badges are on the pay lines. The number of spins, as well as the size of the multiplier and the final prize, depends on how many badges are on the screen. It is also possible to get the Instant Prize feature while the free spins are active. The maximum number of free spins is 15. There is a Wild symbol, the Gun, in this game, and there are two ways to win with it. First, if the gun appears next to the sheriff, the shooting begins and up to 5 symbols turn to Wilds, allowing a player to re-spin the reels. Second, if the gun is between the sheriff and the bandit, another bonus round is activated. It is a duel between the sheriff and the bad guy. The more heads are shot down, the bigger the final winning is, and there can be many levels in this mini game.

The True Sheriff slot machine game is fun to play both for the novice and experienced gamblers. The animation and music are top-notch, and the gameplay is very simple and enjoyable. The game can be played in any web-browser with the pre-installed Adobe Flash Player and does not require any other software. There is no need to download or install anything on your PC, laptop or mobile device to play it. No registration is required when the game is played for free. You can play as many games as you wish as long as you don’t want to play for real money. The pay-to-play version of the game is also available, but one needs to register to enjoy it.