You can not play this game for free
For free slots game go
Play free
or
(7 votes)
Game Played: 2
Full screen: close 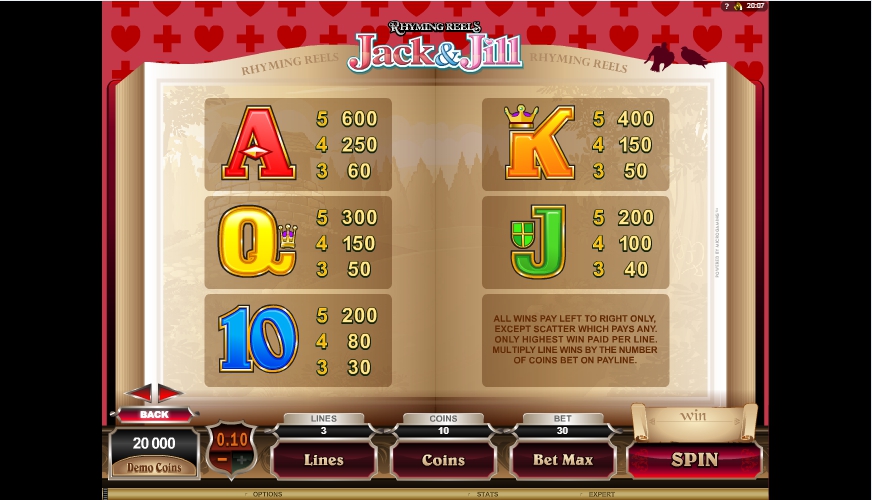 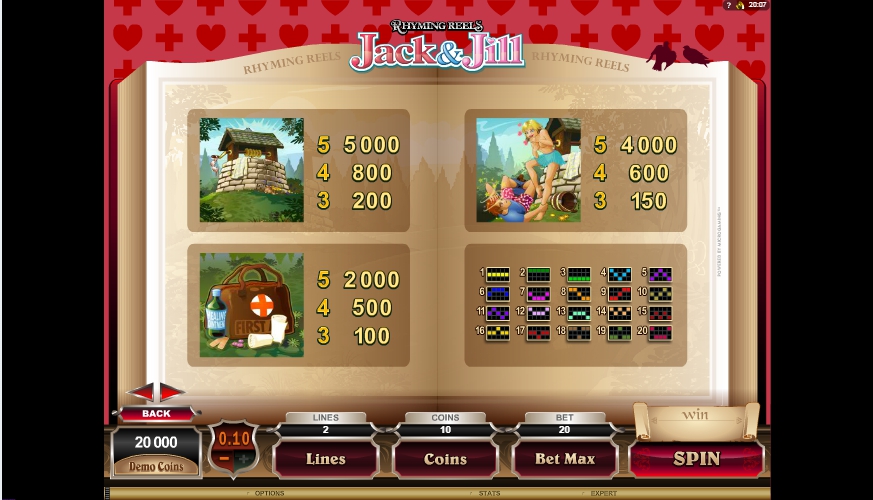 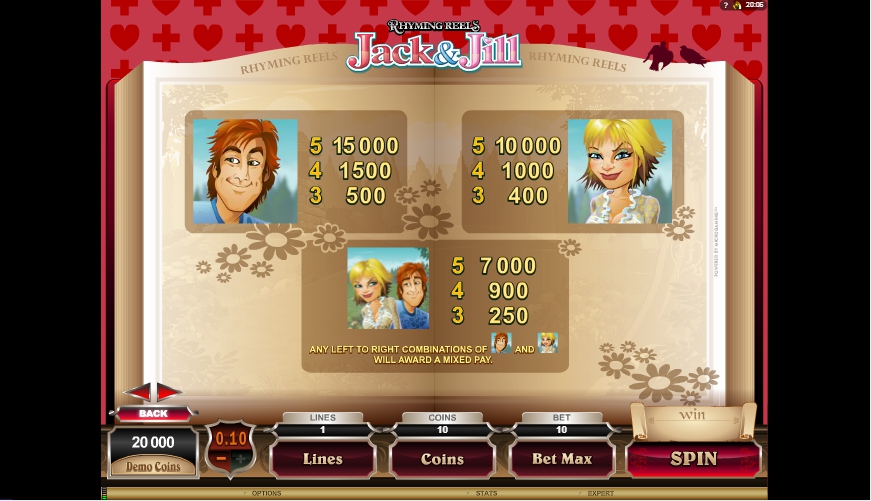 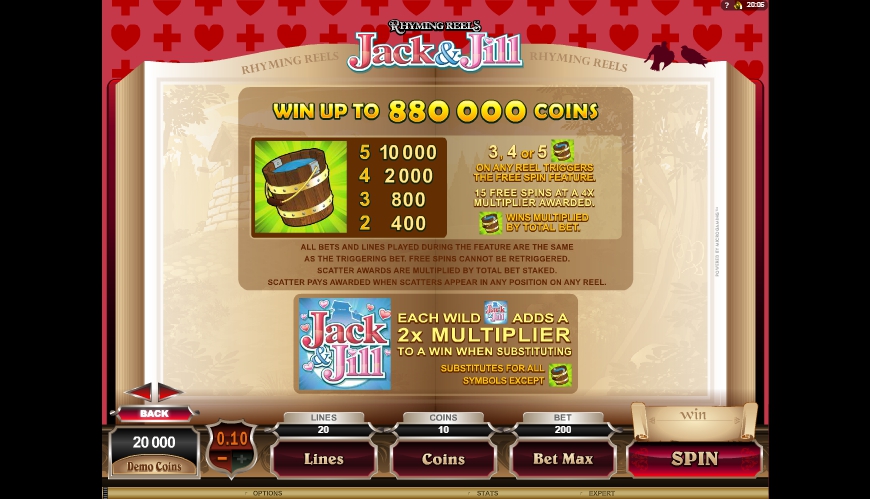 You cannot go to Las Vegas, but you like gambling and want to earn money without living your’re home? Do not be upset! We have something nice to offer you in this review. What about the romantic story of two young people whose meet will grow in big, pure love? Rhyming Reels Jack & Jill is exactly that kind of charming video slot! In England, early the 16th century, the phrase ”Jack and Jill” has been used in order to indicate a girl and a boy.

In 1567 and the next one year, was performed a comedy with the same title, at the Elizabethan court. William Shakespeare has used this phrase twice – in ”A Midsummer Night’s Dream” and in ”Love’s Labour’s Lost”. The developers of Microgaming software have also used it for the creation of the slot machine.

Main part of the Gameplay in the Rhyming Reels Jack & Jill

There are very important things which every player have to know before starting a slot’s game:

– The 20 paylines are set down the 5 reels.
– 1 coin is exactly that minimum number which is allowed to be sent via a line. (The max. = 10.).
– There are a strict number of coins which can be in the game: the min. – 0.010, the max. – 0.10.
– The ‘Auto Play’ is that option which is for the multiple times turning the reels without break.
– To pick or to change the desired denomination of the coin, make click on the ‘-‘ and ‘+’ buttons.
– To select the quantity of the paylines, you need to concentrate on button ‘Lines’.
– To choose how big will be the wagered coins number by using the ‘Coins’.
– To make reels running, push the ‘Spin’. (Romantic melodies will play while this action.).

There are a common but indeed lovely set of the visible symbols: light-blue ’10’; a leaf-green ‘J’; a sunshine ‘Q’; a honey ‘K’; (Except the first, all are decorated – the ‘Q’ and ‘K’ with the purple gems in their crowns, the ‘J’ protected with a little ‘shield’, and the ‘A’ with a rhomboid red stone on the center of the ‘letter’.) a brown bag with white emblem and red cross in it, over which is a text: ”FIRST AID”; a well with hanging rosy bra; Jack’s grinning face; fair-haired and blue-eyed girl (Jill); and they both together – Jack is laying down (from the falling) on the grass near Jill that is resting on a well.

There are some goodies in the Casino Rhyming Reels Jack & Jill

Jack and Jill – this strange couple of people have got each other and you can also get something nice. What about the features, and offered bonus rounds? Are you ready to win the real money? We are sure, you are thinking about the positive answer. That is good. So, what you need to earn? There are symbols which are really cool because of substituting function and they are called as ‘Wilds’.

The ‘Logo’ of this sweet slot (a text ”Jack & Jill” (the first name is colored with the raspberry shade and the second – with a caramel-pink)) will also make any won combo multiplied by 2 times. The full of water wooden bucket with golden rims (a scatter) will immediately bring you a bonus that has the title ‘Free Spins’. In order to perform this, you need to collect 3 such scatters and voila! – you will have in that moment 15(!) free spins.

During this bonus round, absolutely all winnings gonna be by 4 times multiplied! Take in mind that ‘Free Spins’ can be retriggered. The Jackpot is (drumroll…) 15,000 DOLLARS!!!!

Do not waste health and time for the registrations and downloads. Find casino Rhyming Reels Jack & Jill online on the internet and spend lovely time after long hard working day!

Jack and Jill at the well