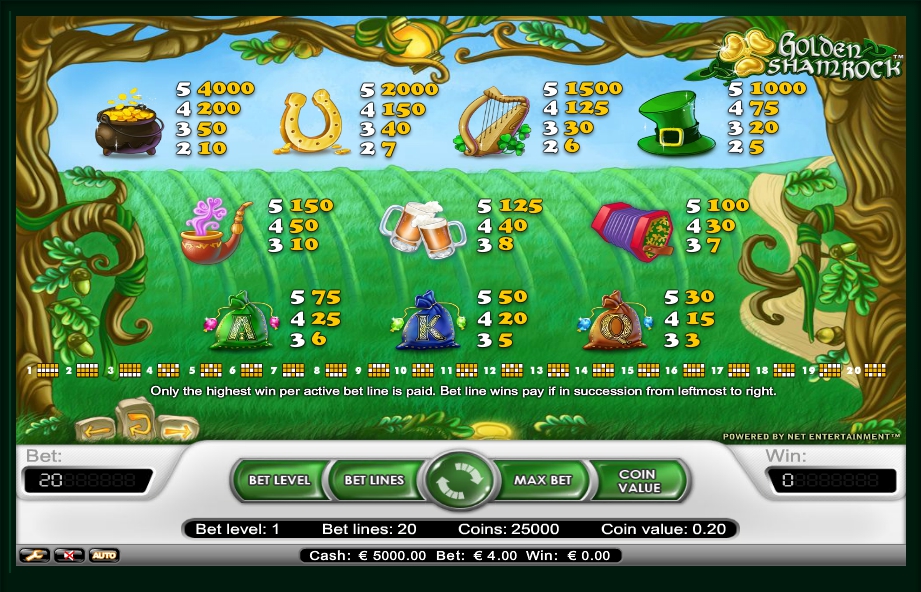 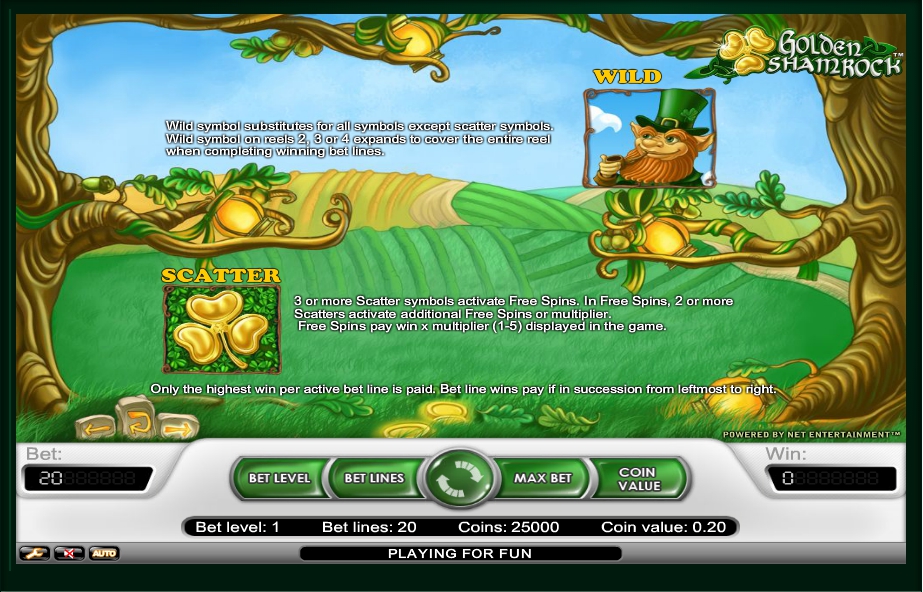 Ireland has always been famous for its friendly and sincere people, loud festivals and idyllic holidays. Knowingly Ireland is called the state of luck. This northern European country is remarkable not only for its amazing landscapes and nature, but also for the fact that the thematic slot machine Golden Shamrock was created on the basis of Irish motifs. The creator of the entertainment is NetEnt Corporation, specializing in the production of fascinating virtual gambling.

Very often in classical or fiction, fairy-tales, movies, there are mentioned magical creatures of leprechauns who own magic gold. There is a legend that in one night of the year these little men leave their holes, leaving gold reserves unattended. It was at this time that a lot of people went in search of this gold. Shamrock is an ancient symbol of wisdom and good luck. Therefore, each player must use this talisman.

Within the plot of the game Golden Shamrock tells the story of the Irish fairy creatures and buried underground gold. Have the courage, and be sure to go look for treasure. Do not forget to take a four-leaf clover with you, which will ensure success and success of your searches!

Like most thematic gambling games from NetEnt, the presented video slot has a branded graphic design and an interface that can not really be confused with content from other providers. It is thanks to the original design, the online game has gained success and popularity among fans of similar genres. In the background we see beautiful landscapes (meadows, sky and trees).

The video slot is represented by five drums. The lower part of the “playing field” zanata buttons. The coin value key is responsible for selecting the bet. Bet Lines – shows the number of active lines. It should be remembered that the higher the bet, the higher the prize, for this you should use the button “max”. And besides the usual rotation, the option of automatic rotation will be available.

The Wild symbol can fully expand on reels 2, 3 and 4, covering the entire reel it appears on, and substitutes for all symbols except for the Scatter symbol. The Scatter symbol is the Golden Shamrock. 3 or more such symbols appearing on any active payline will trigger a Free Spins game.

More free spins can be retriggered by getting two or more additional Scatter symbols, including multipliers of between x1 to x5. There are many interesting symbols in the game, but the most valuable one is the Golden Shamrock, which pays a maximum coin win of 4000! Yes, you heard me very well. This game deserves a place on any gambler’s must-try list.