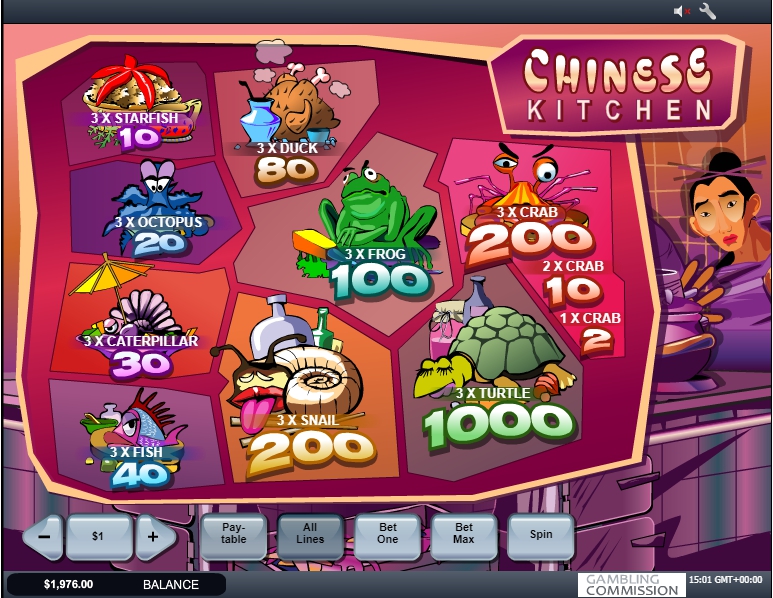 Chinese food is one of the most popular in the world. It affects not only the variety of dishes, but also the original way of serving them. Features of Chinese food culture are rooted in the history of China, in the many thousands of years of Chinese culture, in the specificity of its psychology, its development. Chinese cuisine is very popular all over the world, so Playtech wanted to use this topic when creating the slot Chinese Kitchen.

Unforced graphics and a simple plot, ideally created in order to have a pleasant time and forget about everyday problems. On the screen, in front of the player, there is a magical effect of creating exquisite Chinese dishes, which has always been shrouded in mystery.

The theme of the same review slot can be called the process of cooking Eastern cuisine, and the main characters a funny cook, with protruding teeth, and his assistant. Boiling cauldron emphasizes the “hot” atmosphere of the kitchen. The stylistics of the online-game is completely designed in accordance with the name of the videoslot.

Colorful graphics, done with taste and in no way hinders the pleasure of spending time playing. Despite the variety of colors, the eyes do not get tired. In addition, it’s worth mentioning the music that the slot is equipped with. It qualitatively affects the game process, allowing you to completely immerse yourself in the atmosphere from the first seconds.

The video-game, at first glance lifts the mood, because funny characters that look at you from the screen, do not leave a chance for a bad mood. Despite some technical differences of the video slot (the number of drums and lines), the essence of the game will become clear immediately, even to a person without experience.

In addition, it is worth noting that this slot has a certain charm that makes it choose again and again, even though it does not have bonus games, round-risk and a scatter. In addition, many gamers, believe that the lost revenue from the lack of bonus games, is well overlapped due to the generosity of the game lines. Anyway, we suggest you to make sure of it on your own experience.

Gameplay on the Chinese Kitchen, somewhat different from the other slots manufacturer Playtech. Basically, this is due to the fact that the player has only three drums and eight game lines.

But as before, the player is given the opportunity to choose the bet by which the game will occur. By pressing a special button, the gaming device itself builds a combination that is available for your balance. Beginners are advised to be extremely cautious with it, because otherwise there is a risk to leave the game, much earlier than you planned.

The most popular image that you will see in this game is the crab, it’s like it is acting as a wild, which it isn’t, but even getting 1 crab on the reels you got yourself winning combination.

Despite the fact that the game does not have bonus games and free twists, you will long remember the time for Chinese Kitchen, as unforgettable graphics can lift the mood and distract from the gray everyday life.