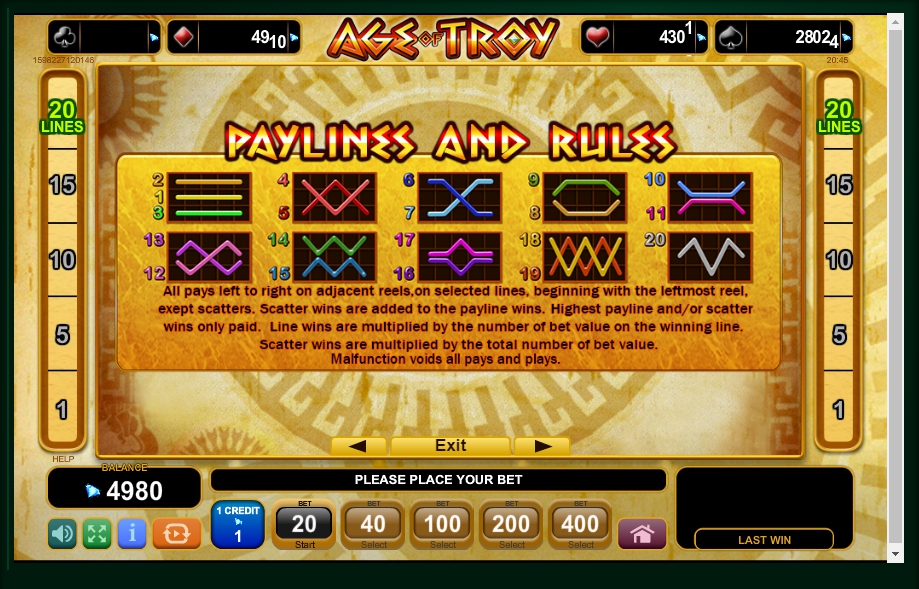 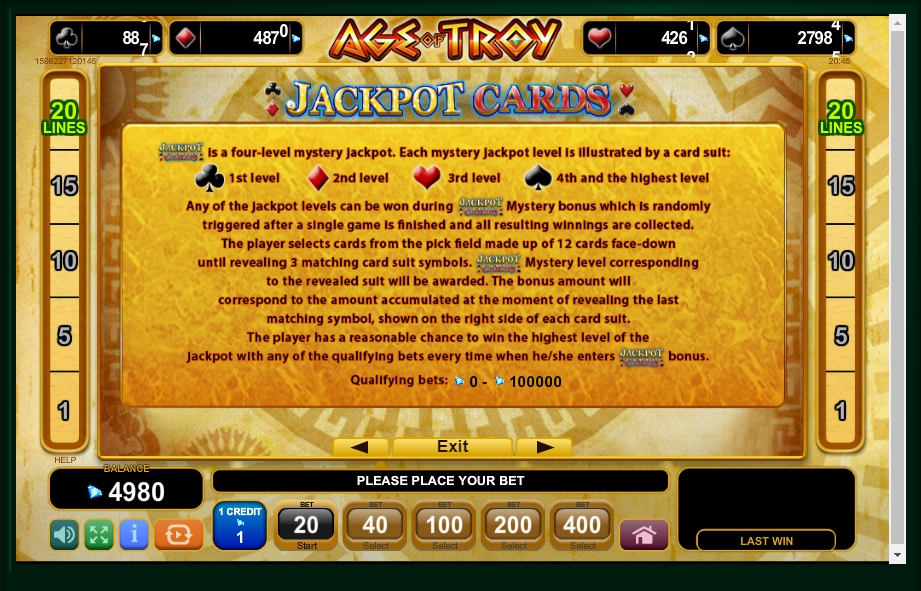 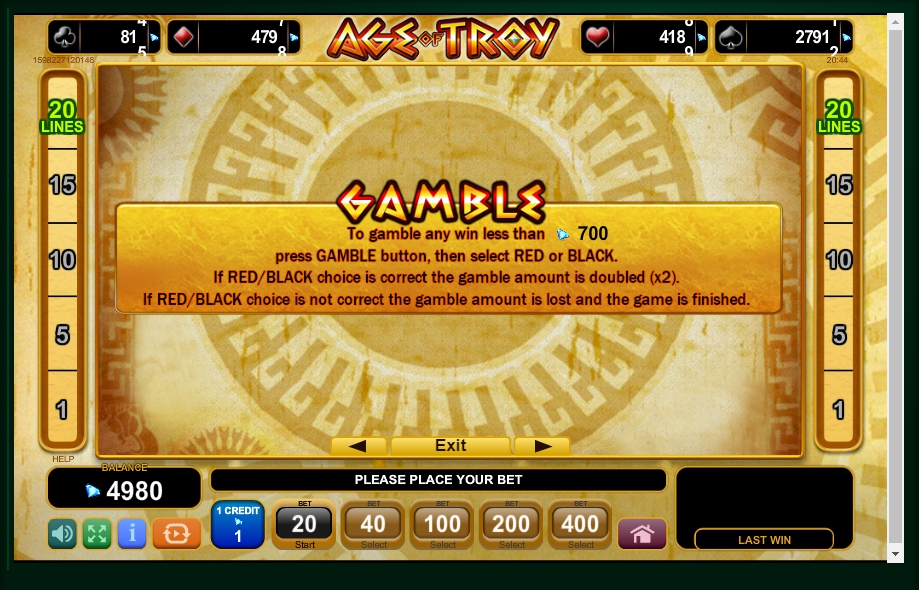 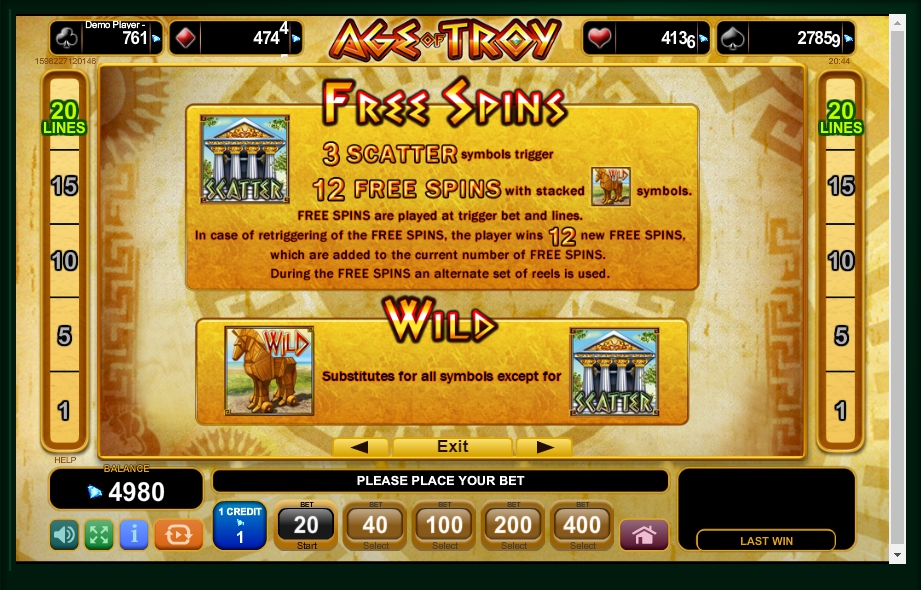 Age of Troy is a 5-reels and 20-pay-lines video slot machine produced by Euro Games Technology. The theme of Troy’s fall, displayed in many creations of painting, literature and cinema, has also become the main theme of this slot. A few lines about this ancient marvelous story. The Trojan prince Paris fell in love with Helen, the wife of the Spartan king Menelaus. He managed to persuade the beautiful girl to escape. While there was no husband, the couple in love sailed to Troy.

Having collected a huge army, offended Menelaus together with his brother Agamemnon hurried after the fugitives. For ten years the bloody war between the Spartans and Trojans continued. The strong walls of the city were inaccessible to the Greeks. Odysseus, the king of Ithaca, came up with one trick. He built a huge statue of a horse, hollow inside, into which the warriors would climb. The Greeks, having got out of the statue, opened the gates of the city and helped the army to enter. The Greek warriors burnt Troy, and Elena had to come back to her husband.

Symbols of the Age of Troy slot

Among standard symbols, you can notice ancient letters, a pot and a horn with gold coins. Standard game elements create winning compositions on pay-lines. To do this, several identical elements ought to line up, beginning with the first reel.

The wins are determined, basing on a player’s bet per payline and a coefficient from the Paytable. The player can check the whole situation by pressing the Paytable button in the left corner at the top of the screen. The table indicates the coefficients in accordance with the marked total bet.

The payers can manage two more elements, the combinations of which don’t bring payouts but make the game more profitable during gambling process. They are a scatter and a wild symbol. Scatter is an image of the Temple. The appearance of three such symbols in any position on the reels will open free spins.

The wild symbol is an image of the Trojan horse. It is in his power to help other elements to complete their winning compositions. The Trojan horse cannot replace only scatter on the reels.

A gambling process of the Age of Troy slot

These amounts correspond to such bets per line: 1, 2, 5, 10, 20 points. The player can vary the quantity of lines by clicking on numerals on the sides of the reels. After marking the bet and determining the active lines, the player can click a Start button to start the rotation.

There is a possibility of additional control over the game by forced stopping of the reels. The player can stop them by buttons with bet marks or the Stop All button. The automatic game starts with pressing the Autoplay button.

The player can trigger the risk-game of the slot by clicking the Gamble button. He has five attempts to double the win. It is necessary to guess the colour of the card, which is face down. Otherwise, the game will end, and the player will lose.

The player can also obtain a pleasant surprise in a form of Jackpot Cards. It is necessary, that any winning composition ended with the appearance of a mystical symbol with the logo of the Jackpot Cards game. After that, the player ought to open 12 cards under the supervision of two beautiful croupiers like in a Las Vegas casino.

Three cards with the same suit finish the game and give the player one of four jackpots. Their amounts are constantly changing, being displayed during the game at the top of the machine screen. The maximum jackpot here reaches 1000 points.

Yellow colours of the sands of Greece, its ancient ornaments and legends about the heroes of Troy found their embodiment in the images of the slot symbols, which, with no doubt, will attract you with its online playing for free, requiring no download or registration.