You can not play this game for free
For free slots game go
Play free
or
(2 votes)
Game Played: 5
Full screen: close 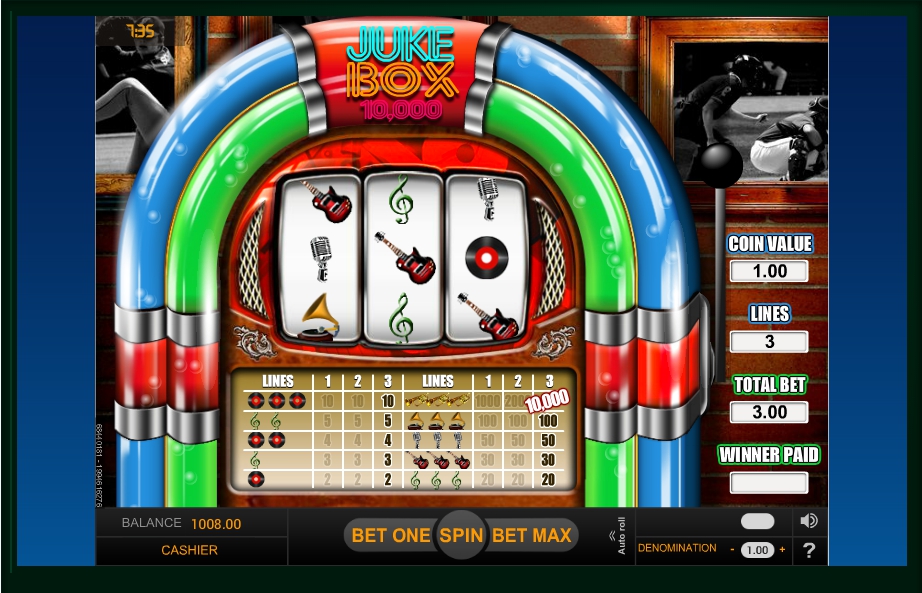 The Juke box (jukebox) video slot recalls the past and turns you back to the classics. Rare cars, disks, furniture and clothes of that time are always in vogue, attracting attention and being often appreciated by more and more modern counterparts. The Juke box represents a jukebox that was popular in 60-70 in America. Becoming its homeland, America is the first thing that comes to mind at the first mention of the jukebox.

This apparatus had a certain number of plates with the songs recorded, being reproduced after a payment by a coin. Appeared in the late 19th century, they had a wide popularity in saloons, bars and cafes, being one of the best entertainments of that time. Unfortunately, with the advent of television, karaoke, video players, stereo equipment, it became outdated and forgotten for a while. However, now we present to your attention the slot that allows you to plunge headlong into the atmosphere produced by this miracle machine.

To start the game, determine the size of the coin. Use the “+” and “-” buttons to do it. Its value ranges from 0.01 to 1. The Juke box game is carried out in only three lines. Make your bets on this standard number of lines.

Just use the “Single line” or “Maximum bet” button. When you press the second one, you will immediately set the maximum value for all lines.

Since the jukeboxes were located mostly in cafes, the interior of this particular establishment we can notice on the welcome screen saver. On the stone wall, the logo of the Juke box 10000 game burns, shimmering with neon flowers. Why 10000? Because this is the sum of the maximum payout that can be obtained during the game.

Then, clockwork rock’n’roll starts to sound, and there is that musical jukebox in front of your eyes, as if coming back straight from America 70’s. With a long inaction, a screen saver with a dancing man appears instead of drums. On the game screen, a pay-table, a control panel and the drums are located at the same time.

Under 3 game lines, you can find the pay-table, divided into two parts. The left part contains not the most profitable combinations, but the right one shows more impressive payments. Wait for the prize combination to appear on the screen to observe a colourful splash: “Huge” or “Great” will appear instead of the drums on a bright acidic background (green, blue, pink orange) with dancing people. In general, the fun can be observed everywhere.

Yes, that’s how people lived in those days! During the rotation, the music fades, showing the importance of the moment. When the bonus combination appears, the game field lights up with different colours. In the table, this chain stands out against the others.

The game here takes place on the lines, where the bets are made. There is only a couple of buttons on the control panel: start, single bet, maximum bet and buttons for adjusting the bet size.