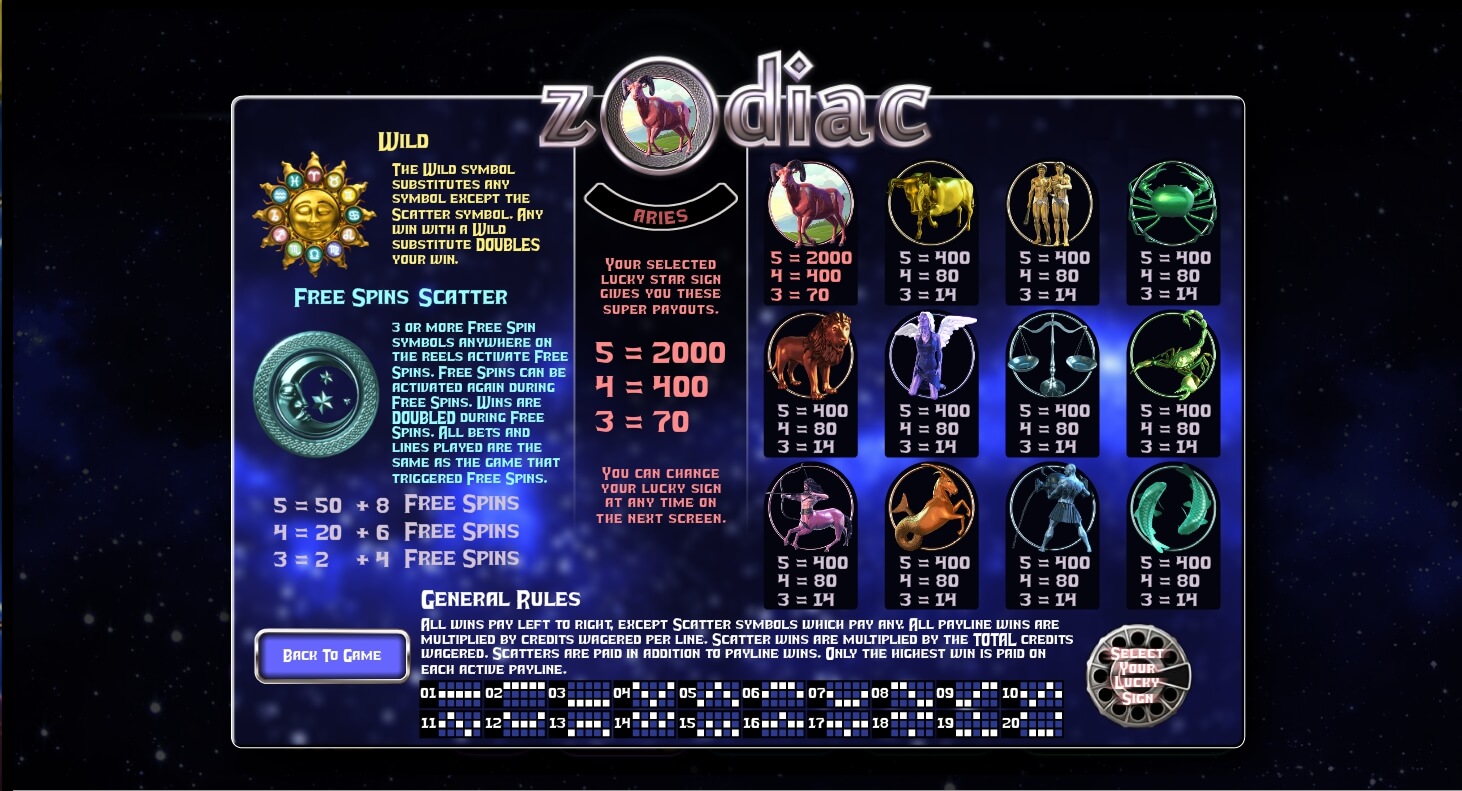 Today astrology has a big impact on our life and destiny. According to this science, every star keeps secrets and it can completely change our world. Astrology originated in the ancient times and was closely associated with astral cults and the astral mythology. It is one of the oldest sciences. For centuries, astrology was especially revered by ancient scientists. Later different signs of the zodiac which correspond to a certain month appeared.

Now everyone can study this science in the Zodiac video slot from the Genii company. Choose your lucky zodiac and get many prizes and payouts.

The graphic design of the slot machine will pleasantly surprise every player. In order that each participant could immerse himself/herself in the atmosphere of the game as much as possible, the authors worked in detail the storyline. So, the gameplay unfolds against the background of the night starry sky, where the player can meet bright heavenly bodies and all the zodiacs. Also note the presence of animated images that make the slot very realistic. Throughout the game process, each user action will be accompanied by a funny melody and characteristic sounds.

Astrologers consulted kings and pharaohs, on the advice of astrologers, state affairs were decided and wars began. Now the player can make a horoscope himself/herself. Thanks to the dark background, all the characters look brighter.

Here will appear Aquarius, Lion, Aries, Virgo and other talismans. Each character is endowed with fantastic abilities. Bright buttons on the control panel attract attention. The participant needs to visit the paytable section to study all the features of astrology.

Five reels and 20 prize lines are available for the game. The bet will be displayed using the Coins button. The Dini function will help you choose the number of lines per round. Now let’s look at the Spin and Autoplay options. They activate the manual and automatic game modes.

You can also monitor your indicators that are displayed in special windows. Additional settings are also provided in the game. It means that you can make the gameplay as comfortable as possible.

The developers of the Genii brand know that every user wants to have fun and also to win real money. Therefore, additional symbols are added to the game. If 3 scatters appear on the screen, then an additional round will be activated. During the next spin, the bet will be made by the game portal. It increases your chances of winning ($ 10,000).

Wild also helps the user during the game session. So, this symbol will complement the combination because it can replace simple icons. Besides, it is worth noting the lack of mandatory registration. You also do not need to download anything. Just connect to the internet and enjoy your favorite slots.