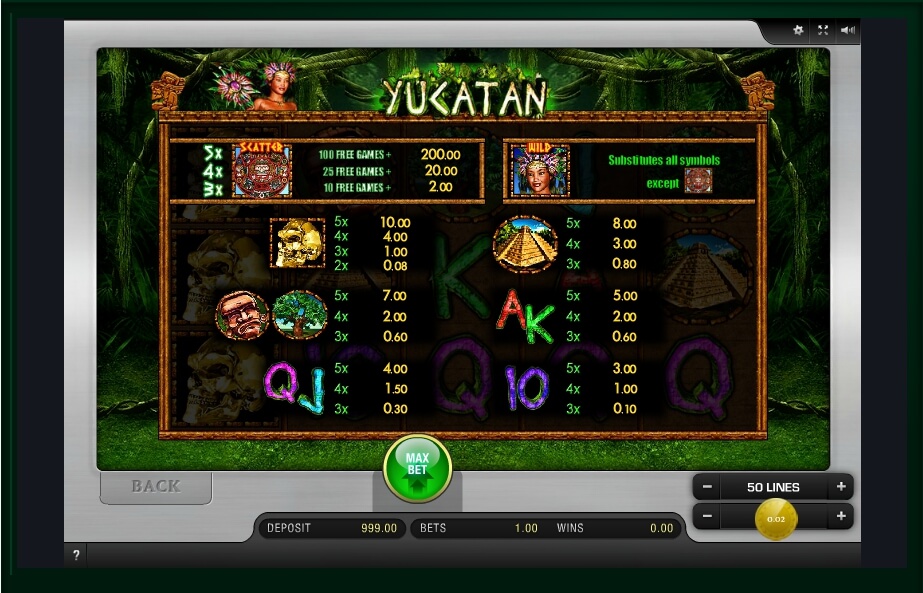 Developers from the corporation Merkur decided to help scientists reveal the secret of the disappearance of one of the most mysterious civilizations. In the game called Yucatan, it’s about an amazing world in which Maya tribe lived. Despite modern technologies and opportunities, specialists can not disclose the secret of disappearance of this nation. However, today there are several theories according to which the tribe has passed into another reality.

This is confirmed by a secret knowledge of the structure of the universe, which was set out in one of the books of this people. You have an opportunity to test this theory during a terrific journey.

The appearance of the gaming machine will attract attention of the players, as here the developers managed to create an atmosphere that fully corresponds to the proposed topic. Players during the game process will meet the characters that emphasize the overall style of the online game. In addition, for creating a realistic visualization designers used high-quality techniques of 3D graphics and also added spectacular animation.

In the end, the musical accompaniment was added. The main location is the jungle that characterizes the Maya tribe’s residence. Of course, the color scale is dominated by a bright green color. During the game process you can meet a beautiful girl, who will reveal all the secrets of her mysterious tribe.

On the playing field (5 reels and 50 lines) will appear a golden skull. It is a sacred relic of the locals. According to the legend, there will be an apocalypse when this skull breaks up. Until this happens the player needs to study the pay table and the rules of the video slot.

After that he can bet with the bet button. The result of the game also depends on the number of active lines that are involved. To do this, click on the lines button and select one of its values. Standard rotations are carried out in a manual mode. But if the participant would like to speed up the game process, then he needs to activate automatic mode.

To expand the gamers’ capabilities, developers have added several additional settings. With their help you can turn off the sound and also adjust the quality of the graphics.

According to the general rules of the game, the participant must make a paid chain to win real money. After that, the player will be invited to participate in one of the additional mini-games.

LADDER GAMBLE contains many payments. To go to the next section and reach the top, you need to choose only high payouts. If the player makes a mistake, his last payout will be lost and he will return to the normal mode.

CARD GAMBLE will transfer the player to a new screen, where there are several playing cards. To increase the payment twice, the user needs to specify the color of the card correctly. To multiply the winnings by 4 times, try to guess the suit.

Spirit of the South HD