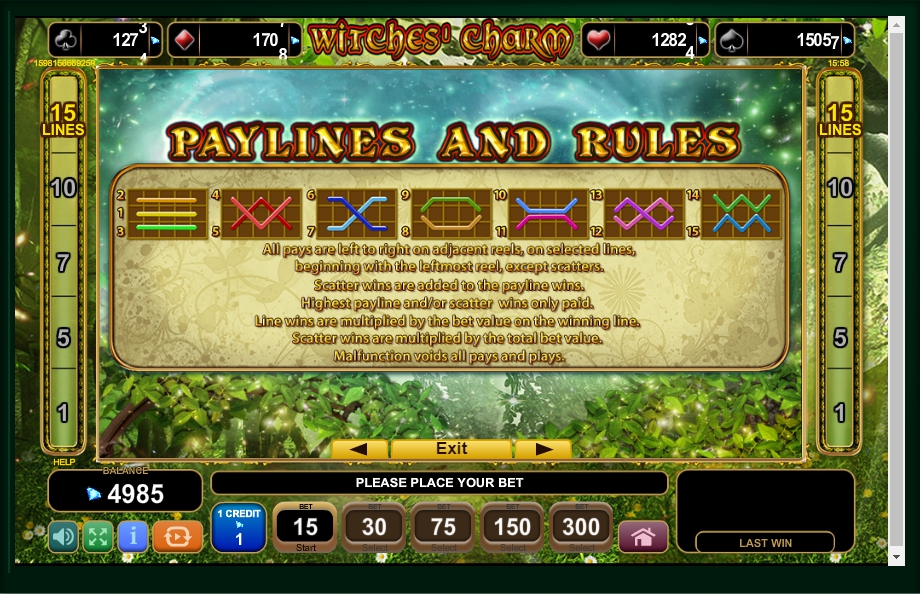 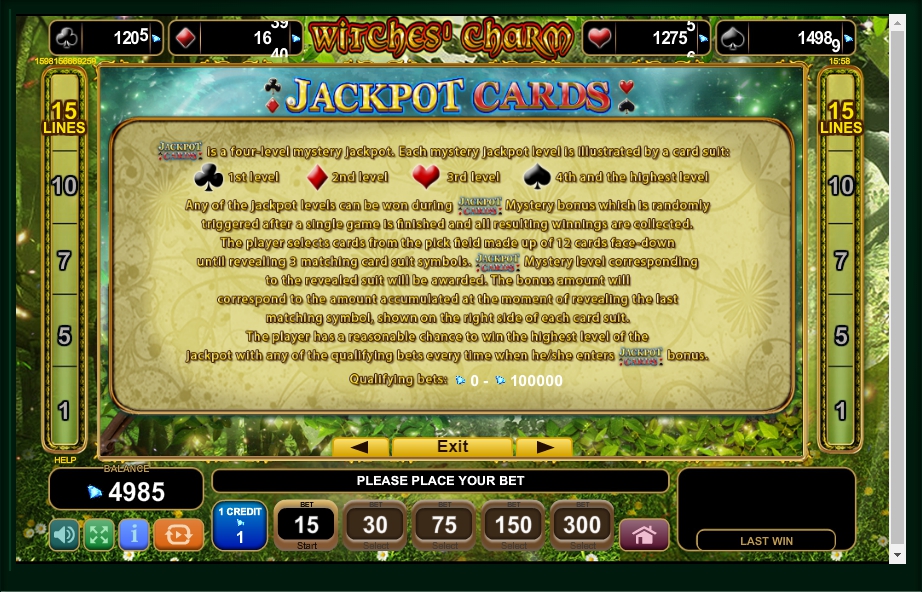 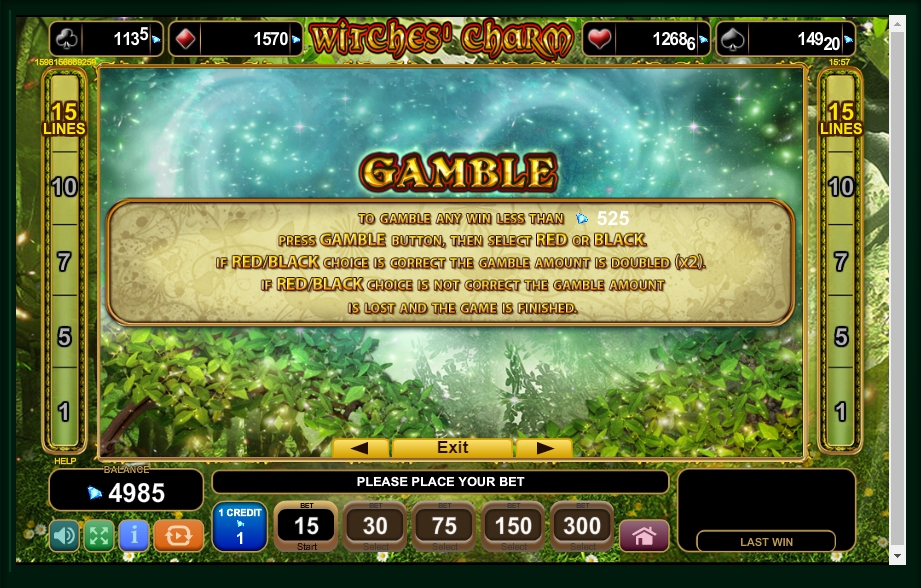 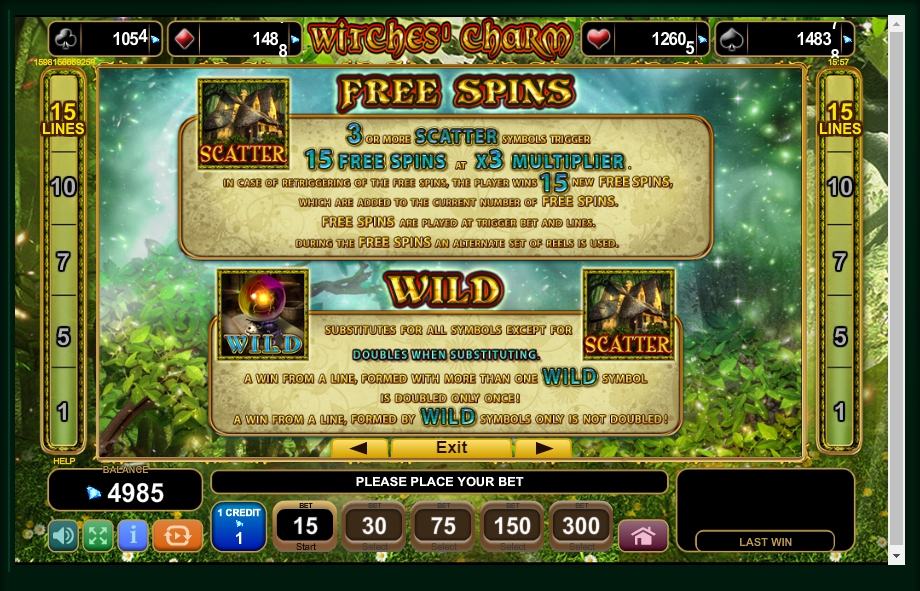 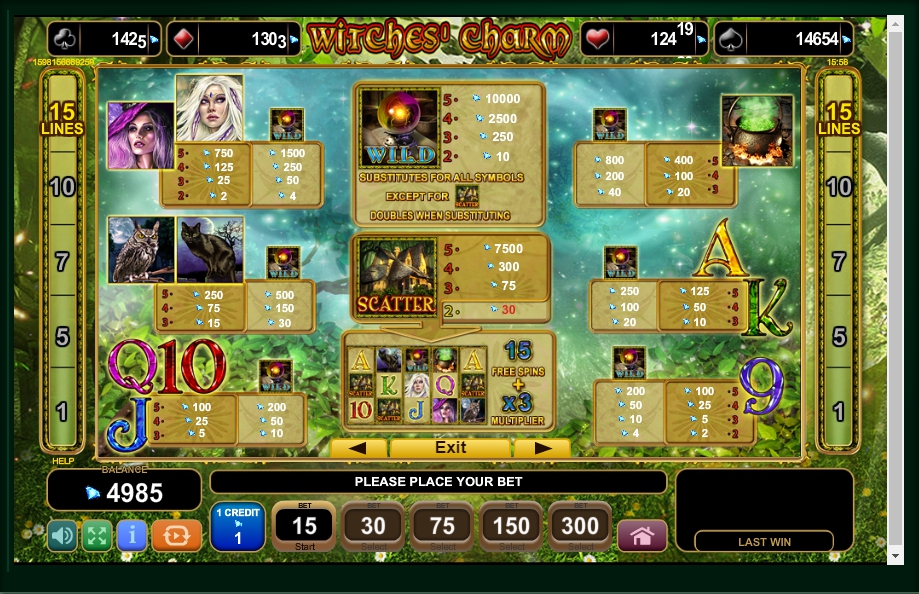 Witches are perhaps most popular and ambiguous heroes of various fairy tales, legends and even gambling plots of the world. According to the legends, these girls use sorcery to achieve their goals and often act as anti-heroes. However, modern trends dictate their own rules: the framework of good and evil in the narratives of the new generation is gradually eroding, and increasingly on the screen and on pages of modern fantasy novels, witches act as neutral or positive characters.

EGT, which released the Witches Charm casino, offers online gamblers to get acquainted with its own witches’ vision: here their images are revealed on the positive side, and the charms of these wizards is directed to the benefit of any player who is ready to believe in magic. The game story will appeal to fans of the Mystic Moon virtual machine and just fans of games based on witch themes.

The background image is a landscape of a dense green forest, through which fireflies flutter. Drums have a monochrome beige background with a light pattern. The symbols of the game, which depict the wizards themselves, as well as the attributes of their life, are presented in a welcoming, disposing light. Most of them are endowed with animation, which is activated in case of addition of a number of identical sings to a comb.

The machine is equipped with the standard interface for the EGT slot machines: all function buttons are located at the bottom of the screen, as well as information boards. The symbols representing four progressive jackpots, for which players are to be fought, are placed at the top of the screen.

To start the main game, select a number of active lines from 1 to 15 by clicking on a button with the desired number on the left or right side of the reels. After that, select a credit rating and, using one of the proposed buttons with the amounts, determine a size of an insertion rate on each of the lines.
The game provides various additions, which increase your chances to win. For example, a wild symbol replaces other images, if these aren`t special characters. When you replace the symbol with the wild card, the payout for the combination increases: note that in the paytable all the provided coefficients for any combinations are derived from both an addition of standard winning sequences and a drop of adjacent combinations with wild. The Scatter symbols, appearing in the number of 3 or more characters on any section of the reels, bring free spins with a triple multiplier of potential winnings. Another important feature is a habitual play on risk. The risk of the game makes it possible to multiply the newly won last sum by half. The player only needs to guess a colour of a card: black or red.
Witches Charm provides an opportunity to win one of four available progressive jackpots. You can earn real money! Any player can enter this draw randomly. All needed is to choose three closed cards correctly.
Enjoy a qualitative graphics, an exciting storyline and frequent payments with the Witches Charm. The slot will not only bring an aesthetic pleasure by means of an excellent visualisation and a non-trivial plot, but also give a real chance to win one of 4 coveted progressive jackpots. Play Witches Charm online with no download.