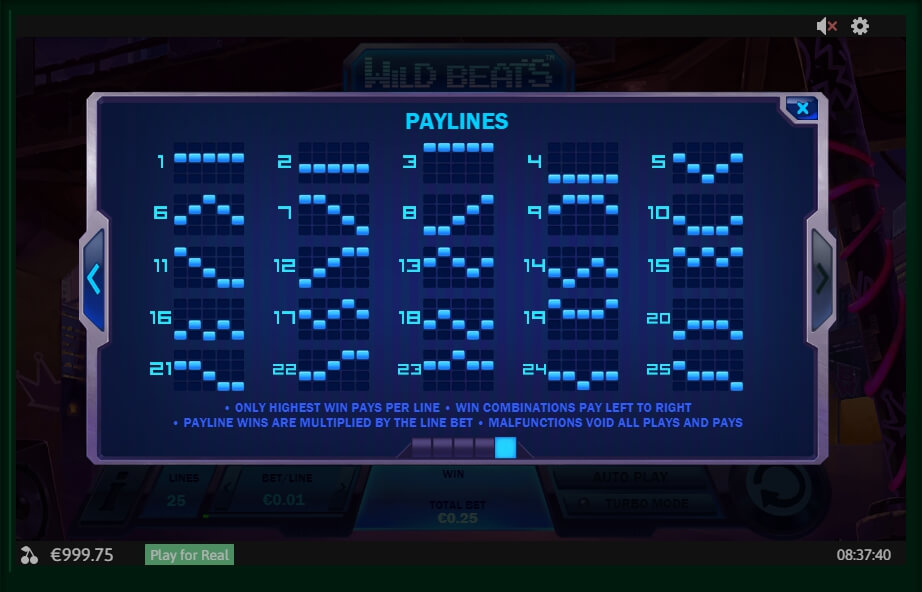 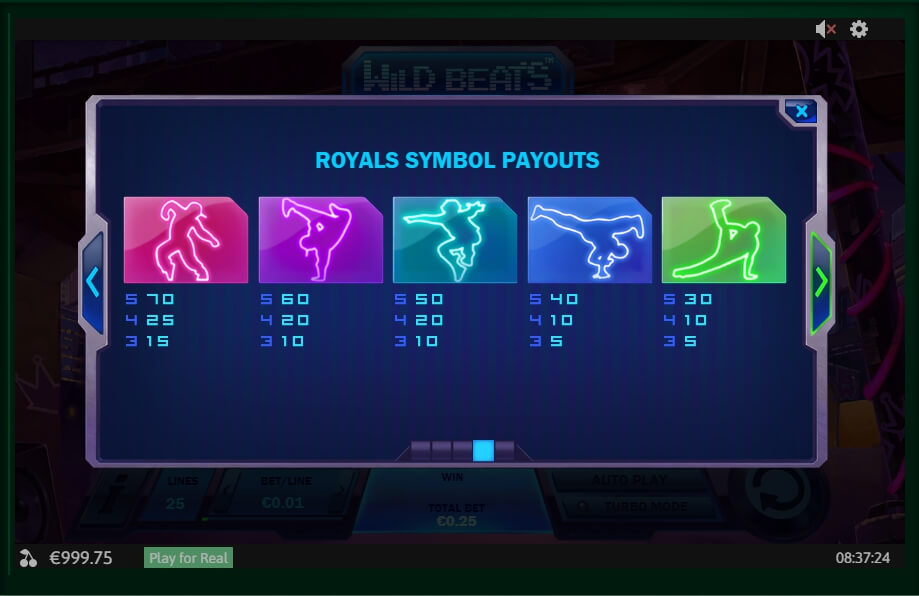 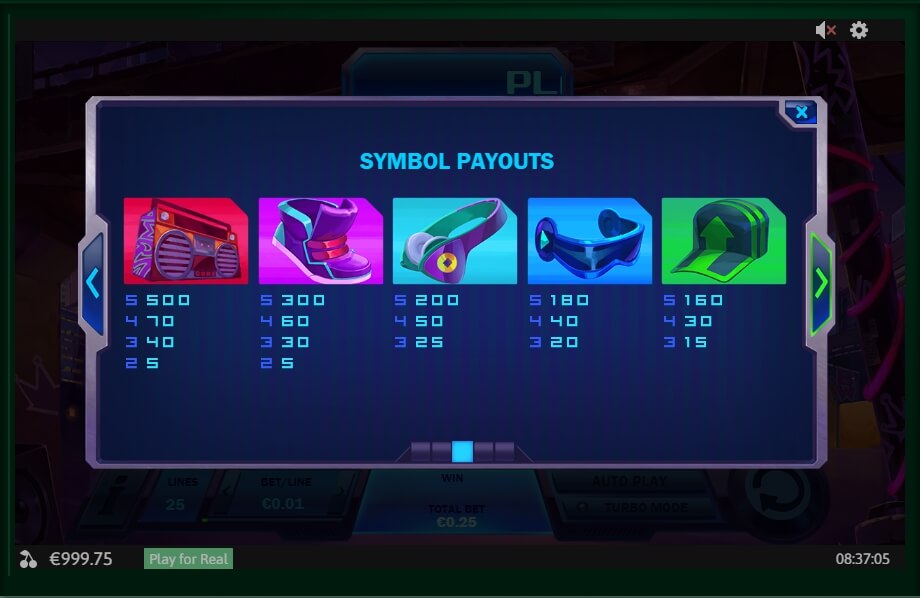 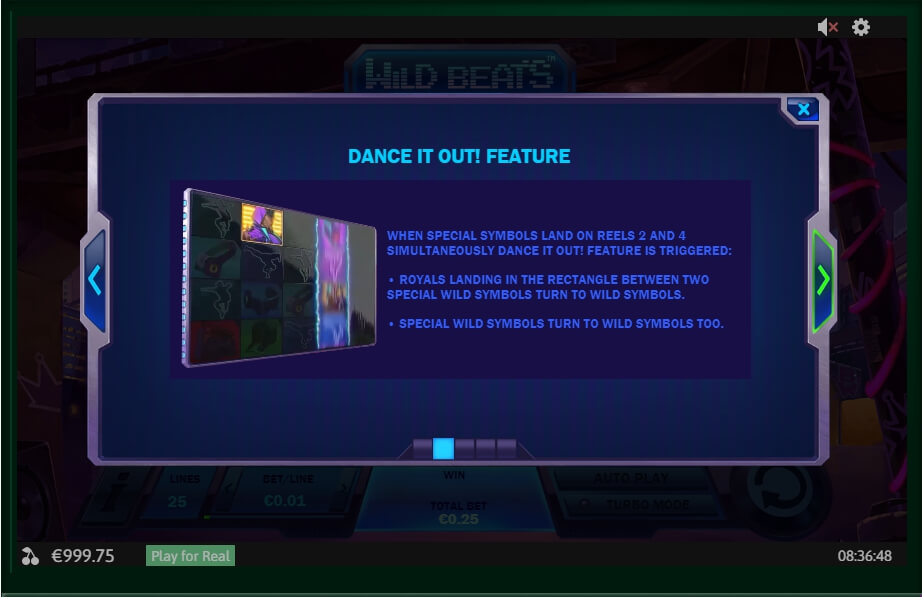 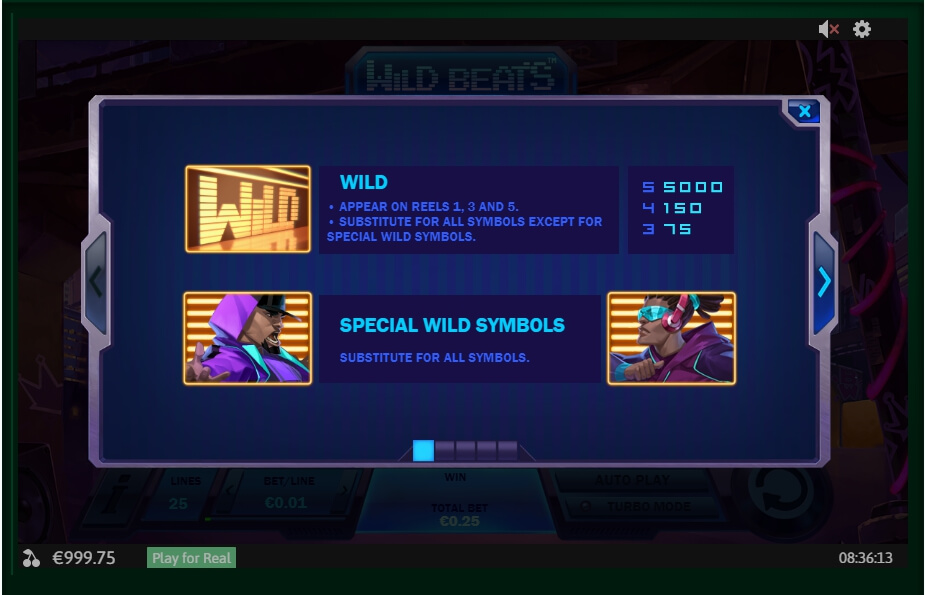 Today, various dance battles, during which street dancers compete, are very popular. This style of dancing became the basis to several television programs that broadcast such hip-hop battles. Recently, one of providers tried to describe this style of dancing in one of their video slots. Today we will look at a terrific product called Wild Beats. The Playtech Corporation again decided to play a non-standard theme that is interesting to the young players category. However, for other categories, the developers have prepared an interesting story and high payouts.

The design of the slot machine is bright, high-quality and modern. Opening the game, the participant will move to one of the streets of the metropolis where such battles are taking place. On the background, we can see the high skyscrapers that were performed using high-quality 3D graphics and additional animations.

Here under the bridge, there is a battle in which street dancers take part. Of course, such an event is accompanied by loud rhythmic sound effects, the volume of which is adjusted by the user. The playing field with 5 reels and 25 active lines is full of bright colors that draw attention to the gameplay. Here all the attributes of dances and additional symbols appear.

Below we can see two music columns that surround the control panel. Playtech developers always adhere to the characteristic style of the company, so the control panel is standard for all products of the brand. To learn the movement of dances, you need to click on the “i” button to open the paytable and also the structure of prize lines.

Next you need to make a bet (from 0,01 to 0,40). For this action, a button with the inscription Bet / Line is intended. All lines are active by default, so you only need to start the rotation. Fortunately, this action can be performed in three modes. So the video slot has manual, automatic and turbo modes that are activated by the corresponding keys.

The thematic images will appear on the playing field. Also you will meet the yellow joker that can replace standard images. In addition, 5 of these elements pay up to 5,000 loans. The dancer plays as an extra wild that appears only on 2 and 4 drums.

A few such icons will increase the additional multiplier. Thanks to this option, the player will have more chances to win real money and also get the main prize that is 50 thousand coins.

To participate in the battle without high risks, you can choose the automatic mode, during which virtual credits will be used. It is also worth noting that this option is available without registration and downloads. Play and win now!

Piggies And The Wolf